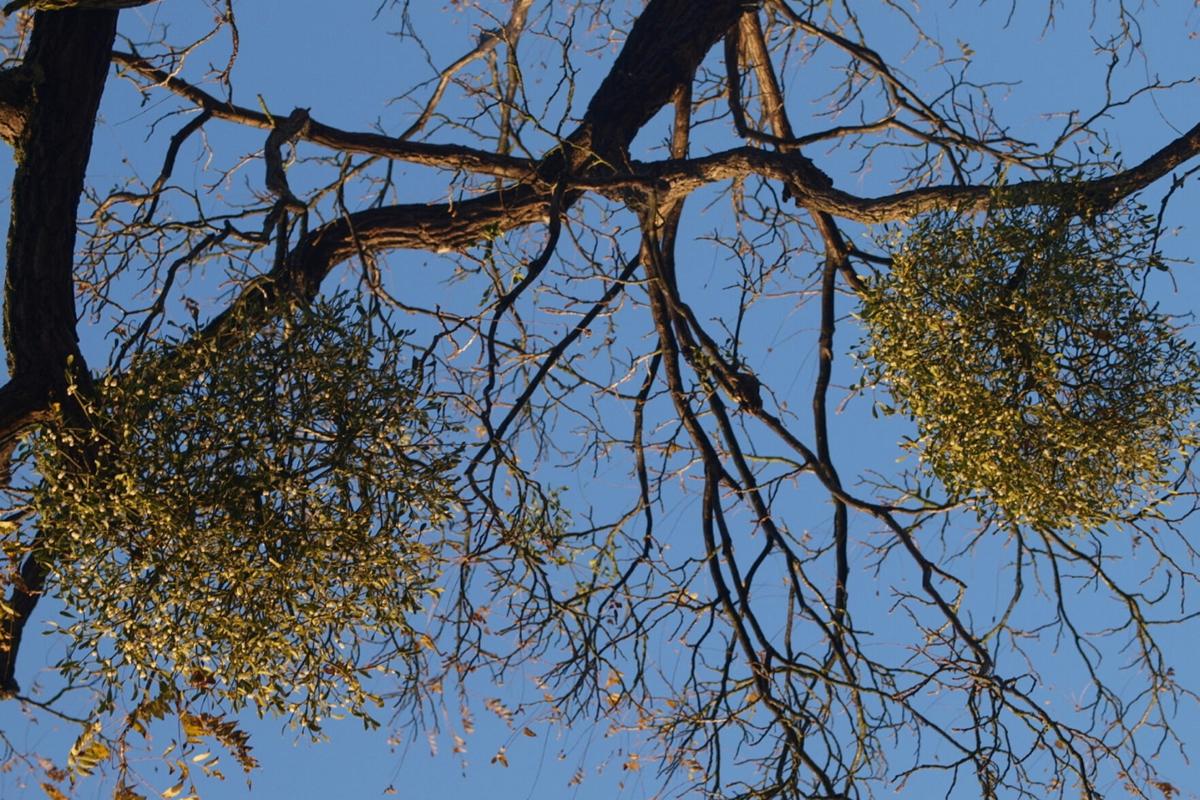 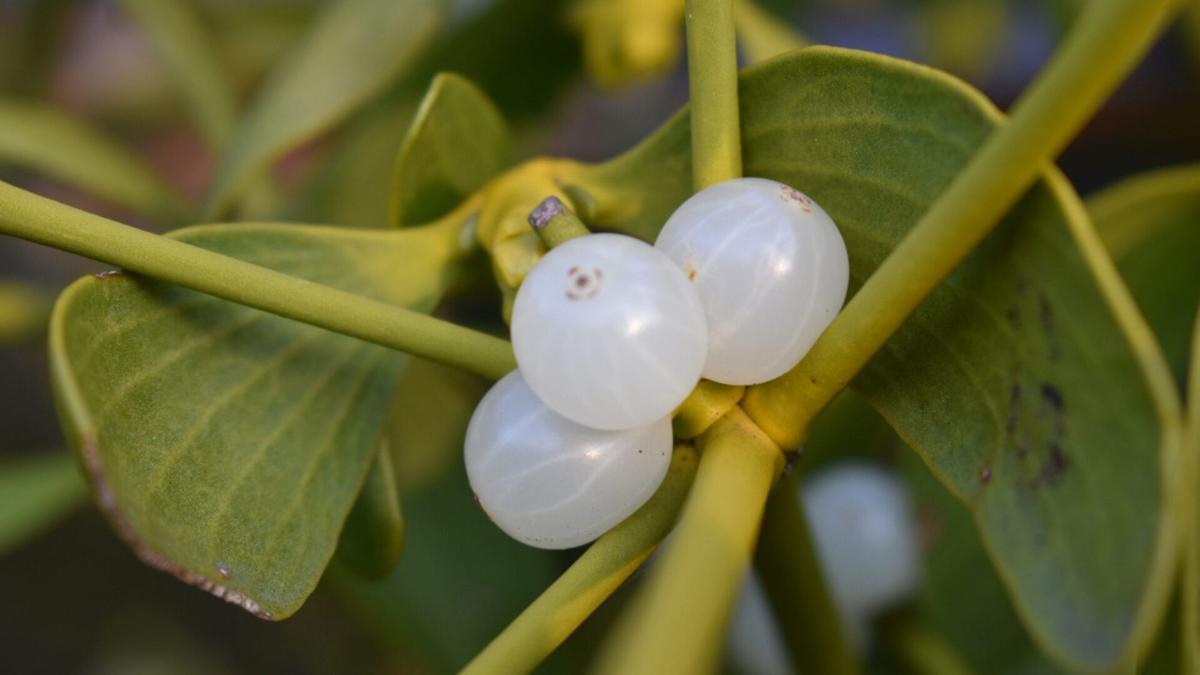 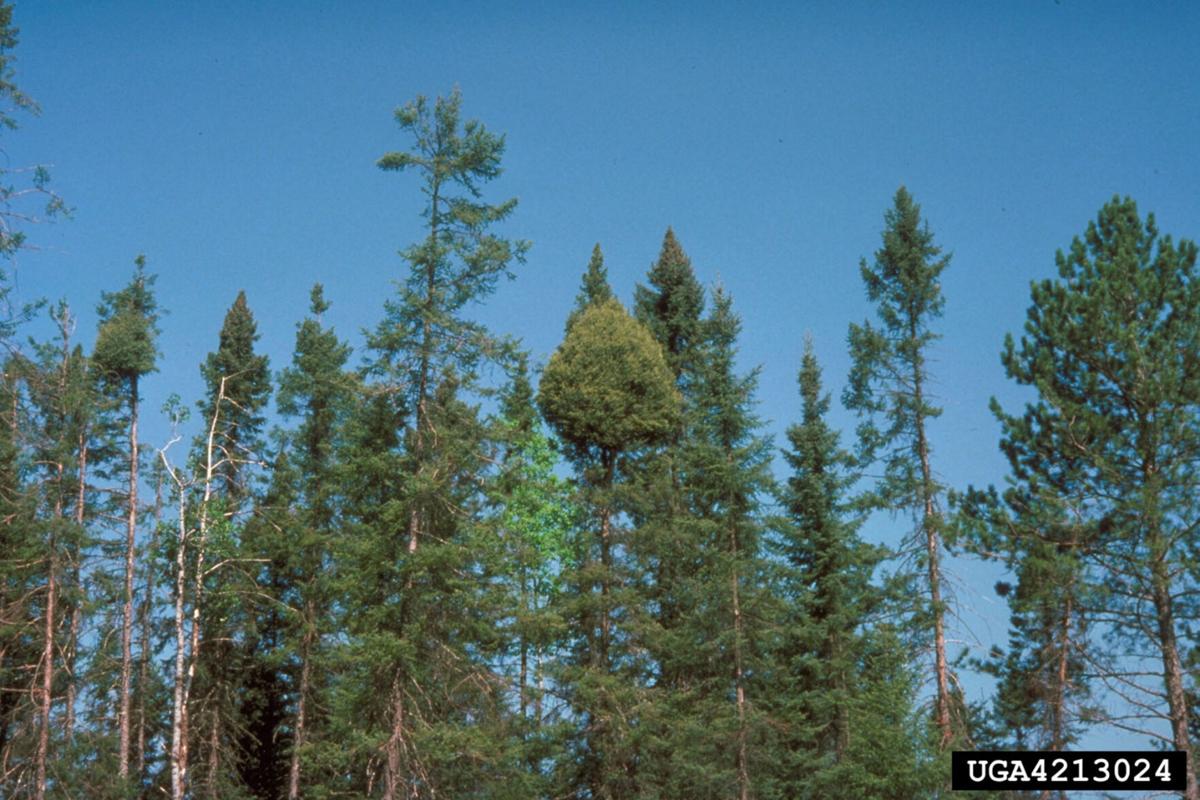 A mistletoe is a flowering plant (angiosperm) which, although capable of growing independently, is almost always parasitic or, more specifically, partially or hemi-parasitic. Mistletoes grow on the branches of host trees and shrubs, sending out roots that tap into their hosts’ vascular systems, which they then rely on for uptake of water, mineral nutrients and, to some extent, carbohydrates. It’s interesting to note that the word mistletoe translates from its Anglo-Saxon origin as dung on a twig; derived from the ancient belief that the plants grew from bird droppings. Actually, they grow from seeds found in the bird droppings.

In the wild, the two varieties of mistletoe most often hung at Christmas both parasitize deciduous trees. The plant originally named mistletoe, Viscum album, or common mistletoe, is a green shrub, native to much of Europe and parts of Asia, that produces small, yellow flowers and white, sticky berries, which are considered poisonous. Phoradendron flavescens or P. leucarpum, often referred to as leafy mistletoe, is a North American native, which is very similar in appearance to its European cousin. It ranges across much of the Eastern U.S., but can also be found in some midwestern and southwestern states. It does not grow as far north as New York.

There is a mistletoe that does grow in our region, however, Arceuthobiumpusillum. Known commonly as eastern dwarf mistletoe because of its lack of leaves and reduced visible growth habit, it’s a plant parasite of spruce and larch (tamarack) trees.

Considered a potentially serious pest, especially in stands of black spruce, dwarf mistletoe is capable of producing and forcibly ejecting seeds coated with an extremely sticky substance called viscin, which acts like glue, allowing seeds projected onto nearby trees to stick to the limbs, where they germinate, producing radicles (rootlets) that easily penetrate the bark and wood tissue of younger branches. The growing mistletoe is then able to consume water and nutrients taken up by the host tree, while altering hormone production within the infected host. Although it may take several years, swelling eventually occurs at the point of infection, leading to the formation of compact masses of brush-like branches, called brooms or witches brooms. Several mistletoe plants may grow on a single broom, causing decline and ultimately killing the host.

How did Mistletoe Become Associated with Christmas?

Believing it to be sacred, the Celtic Druids used mistletoe ritualistically, to ensure fertility and as an offered sign of peace, friendship, and goodwill. They also used it in medicine, believing it to be a cure for many illnesses and an antidote to poisons.

Mistletoe was also accepted as protection against dark witchcraft and evil spirits and, as such, gathered and worn around the neck or hung in a decorative fashion on and/or in homes. It may very well be that the modern traditions of hanging mistletoe at Christmas and kissing beneath it stem from these early pagan practices.

Or are these traditions rooted in Norse Mythology; to the story of Baldur the Good, perhaps the most beloved of all the Norse gods; the son of Odin, god of war and magic and the half-brother of Thor, god of thunder, lightning, agriculture, and craftsmanship?

Tormented by visions of her son’s death, Baldur’s mother, Frigga, goddess of love, beauty, and destiny, exacted an oath of allegiance from all things; plants, trees, beasts, birds, metals, fire, water; to protect and never harm her son. But, she overlooked mistletoe; a small shrub, which grew only on the branches of trees on the eastern slopes of Valhalla.

Upon learning this, the demonic trickster, Loki, contriver of mischief, thievery, fraud, lies, revenge, dark magic, and natural disasters, extracted a poison from the mistletoe and devised a heinous plan. He fashioned a dart out of mistletoe root and soaked it in the poison.

Loki had often watched as the young gods, knowing that Baldur could not be hurt by stones or sticks, or anything hewn from them or forged from metal, would amuse themselves by throwing rocks, limbs, swords, axes, and the like at Baldur, knowing that none would find their mark. It was considered an honor to participate in such games. He sought out Hodur, the blind and slow; god of winter, darkness, and night. “Surely you would like to be part of this merriment?” Loki tempted. “Come! Throw this dart at Baldur. I will guide your hand.” Hodur agreed and excitedly released the dart. It pierced Baldur’s flesh and, in just a few moments, Baldur lay dead.

The entire world was overcome with sadness. Every living thing wept. Frigga prayed relentlessly that her son might be released from death and, eventually Hel, the goddess of death, did allow Baldur to return to the land of the living. Frigga was so grateful that she commanded the mistletoe to produce white berries, as a reminder of her tears. And she promised a kiss to all who passed under it.

Perhaps this is how mistletoe became a symbol of birth, death, peace, love, and resurrection. Perhaps this is from where the modern traditions of hanging mistletoe at Christmas and kissing beneath it stem. Whatever the origin, as Christianity spread across Europe, the customs and traditions having to do with mistletoe were assimilated into the celebration of Christmas.

One last thought. If you decorate with mistletoe this season, bear in mind that the berries are potentially poisonous and that mistletoe used as a Christmas decoration should be kept out of the reach of children and pets.