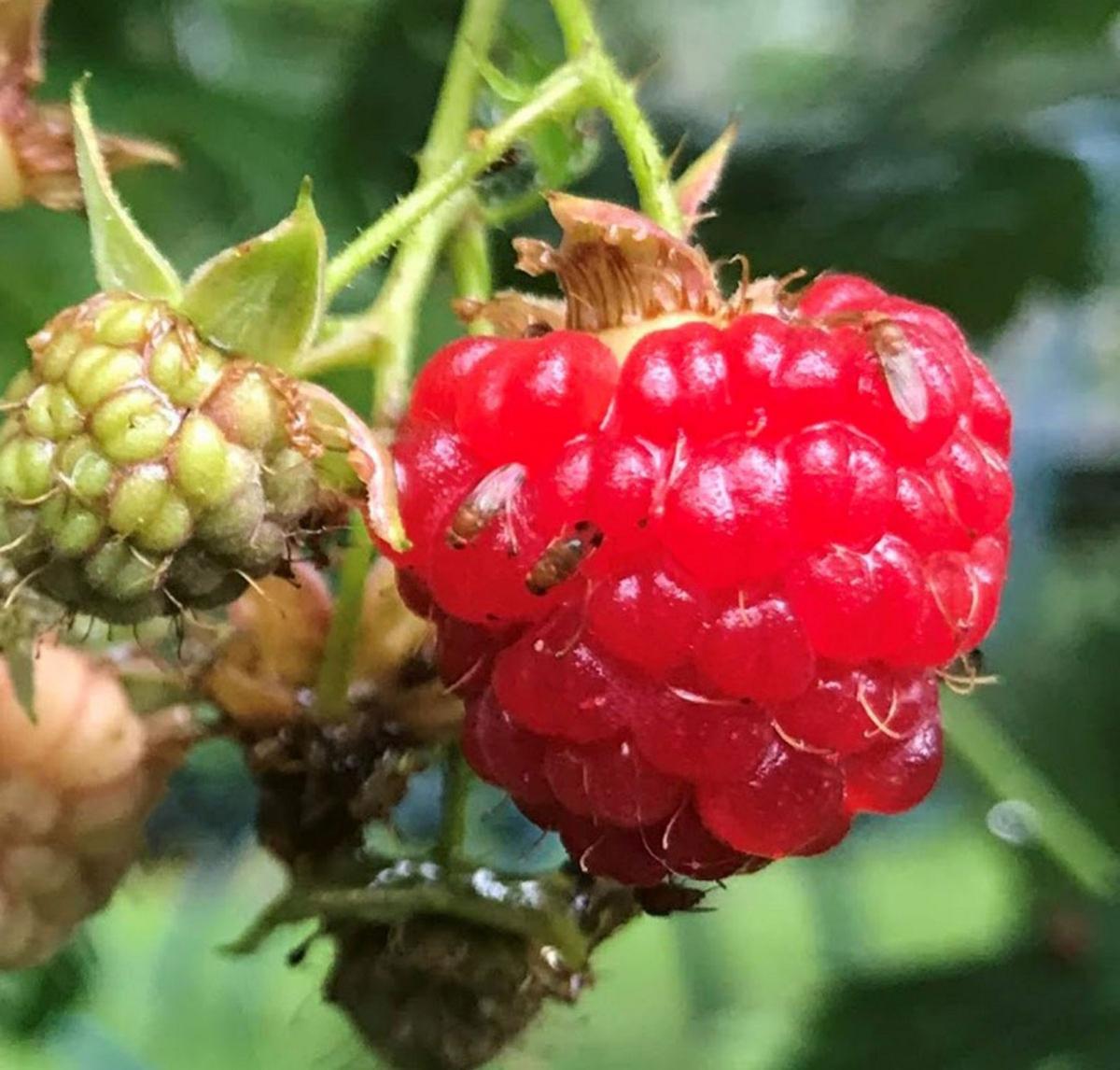 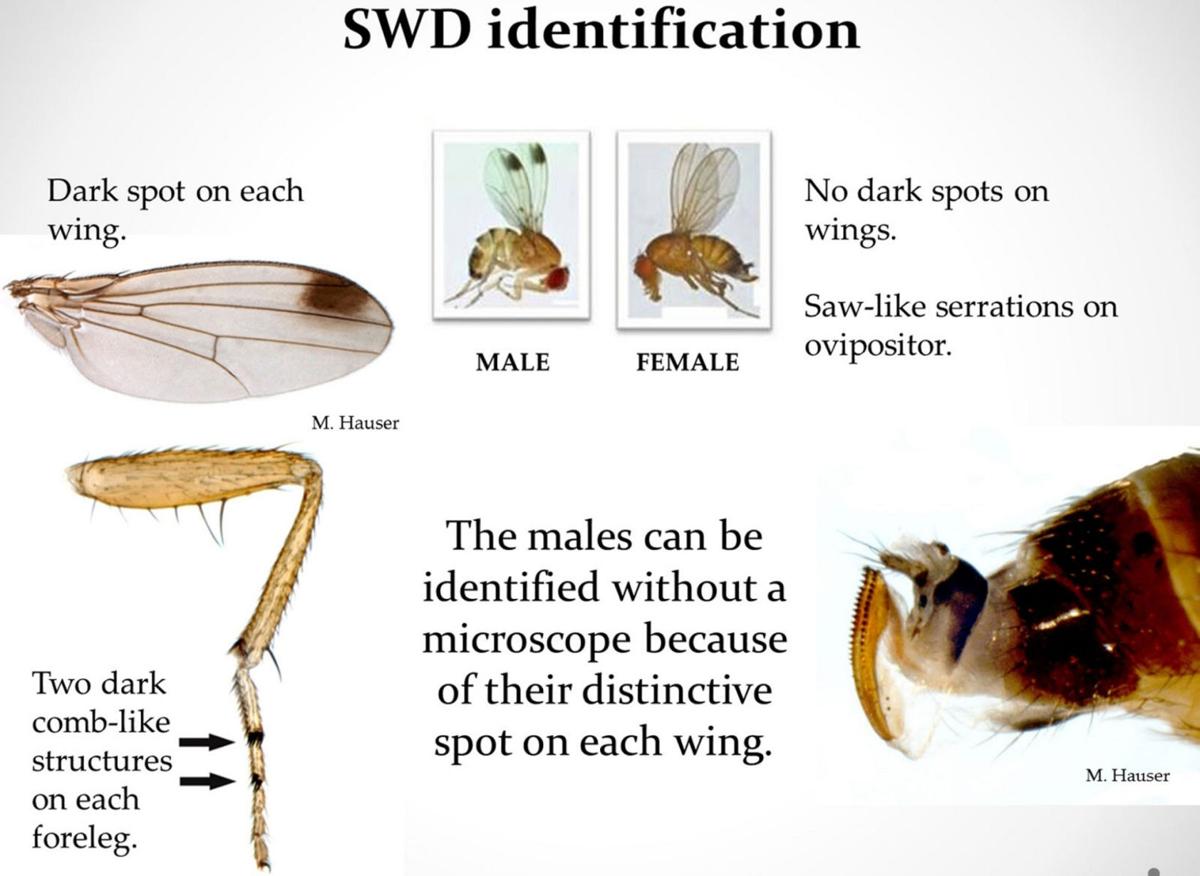 The spotted wing drosophila (SWD), Drosophila suzukii, is a vinegar or fruit fly native to Southeast Asia. It’s been in Hawaii since the 1980s and was first detected in North America in 2008 in California. In 2010, it was discovered in Florida, the Carolinas, Michigan and Utah; eventually turning up in the Hudson River Valley of New York in 2011. Its range now includes the entire continental United States, with the exception of Arizona, Nevada, New Mexico, and South Dakota, as well as several provinces across Canada (British Columbia, Ontario, Quebec, New Brunswick, Nova Scotia and Prince Edward Island). Its many hosts include raspberries, blueberries, strawberries, grapes, cherries, peaches, plums and other late-season, soft-flesh fruits.

Unlike other fruit flies, which lay eggs on over-ripe or rotting fruit, SWD lay their eggs inside fresh fruit, causing it to become pulpy and unmarketable. Female SWD have a unique ovipositor (the tube through which a female insect deposits eggs) with a saw-like end that allows them to cut into the fruit and insert their eggs. Both larvae and adults feed on the fruit, causing billions of dollars in global crop-damage. In recent years, some growers have reported late-season crop-losses exceeding 80%.

SWD is now seasonally active in our region. The Eastern Spotted Wing Drosophila Volunteer Monitoring Network; a group of Cooperative Extension specialists, County Extension agents, State Department of Agriculture personnel, fruit growers and other stakeholders reported their first SWD catch in Clinton County –– five females and one male caught in two traps set on the edge of a blueberry planting –– on June 15. A single female was found in a trap set on the edge of a raspberry planting in Essex County on June 15, as well. The traps were checked and continue to be monitored by Andy Galimberti; a Cornell Cooperative Extension field technician, and Elisabeth Hodgdon; a CCE regional vegetable specialist. Galimberti and Hodgdon are part of CCE’s Eastern NY Commercial Horticulture Program (enych.cce.cornell.edu).

Gardeners growing strawberries, raspberries, blueberries, grapes, and other soft fruits should be aware that SWD populations are only going to increase as the season progresses. Strawberry, summer-bearing raspberry and blueberry growers should be monitoring particularly closely at this time, as those crops are either already in-season, or will be soon.

n refrigerating harvested berries without delay to prevent the fruit from breaking down.

n removing and destroying infested or dropped fruit, which stops the eggs and larvae from growing into adult flies.

Another cultural control method that can be used to manage SWD is exclusion, through the use of netting.

Berry production is a $20 million industry in New York. The Cornell Berry Team; a task force of fruit growers and researchers from Cornell University’s College of Agriculture and Life Sciences with expertise in horticulture, entomology, plant pathology, agricultural economics, plant breeding and management practices have, for several years now, been studying the effectiveness of exclusion netting structures for both home and commercial berry fruit production.

According to Greg Loeb, a Cornell University professor of entomology and research specialist with expertise in biological control and Integrated Pest Management based at Cornell AgriTech (formerly the New York State Agricultural Experiment Station), New York berry farmers lost about $5 million to SWD in 2012. That summer, Dale-Ila Riggs and her husband, Don Miles, owners of the Berry Patch, a 230-acre berry, vegetable and cut-flower farm in Rensselaer County, lost roughly 40% of their half-acre blueberry crop and about 25% of their high-tunnel-grown fall raspberry crop to SWD. Riggs, a former Cornell Cooperative Extension educator and professional IPM field scout, has said that the only reason they didn’t lose all of their fall raspberries that year was because they were spraying regularly, every three to four days. They’d never had to spray before.

They had very good results with the 80-gram netting; experiencing only a very small late-season infestation. In fact, under 80-gram netting, they were able to attain a 0.67% infestation rate during their first-year 10-week harvest period. And they have continually been able to maintain near-zero levels of infestation under such fine-mesh exclusion netting without using any insecticides. By comparison, the treated control had a 60% infestation rate.

On Jan. 21, 2016, Riggs received an Excellence in IPM award from the New York State IPM Program at Cornell University. She was serving as president of the New York Berry Growers Association at the time. Her research and testing have led to the development of the fine-mesh exclusion-netting-material that the Berry Patch currently uses to protect their crops from potentially devastating damage and loss. She and her husband have since formed a new company, Berry Protection Solutions, which teaches farmers about healthy options for crop protection and markets the netting.