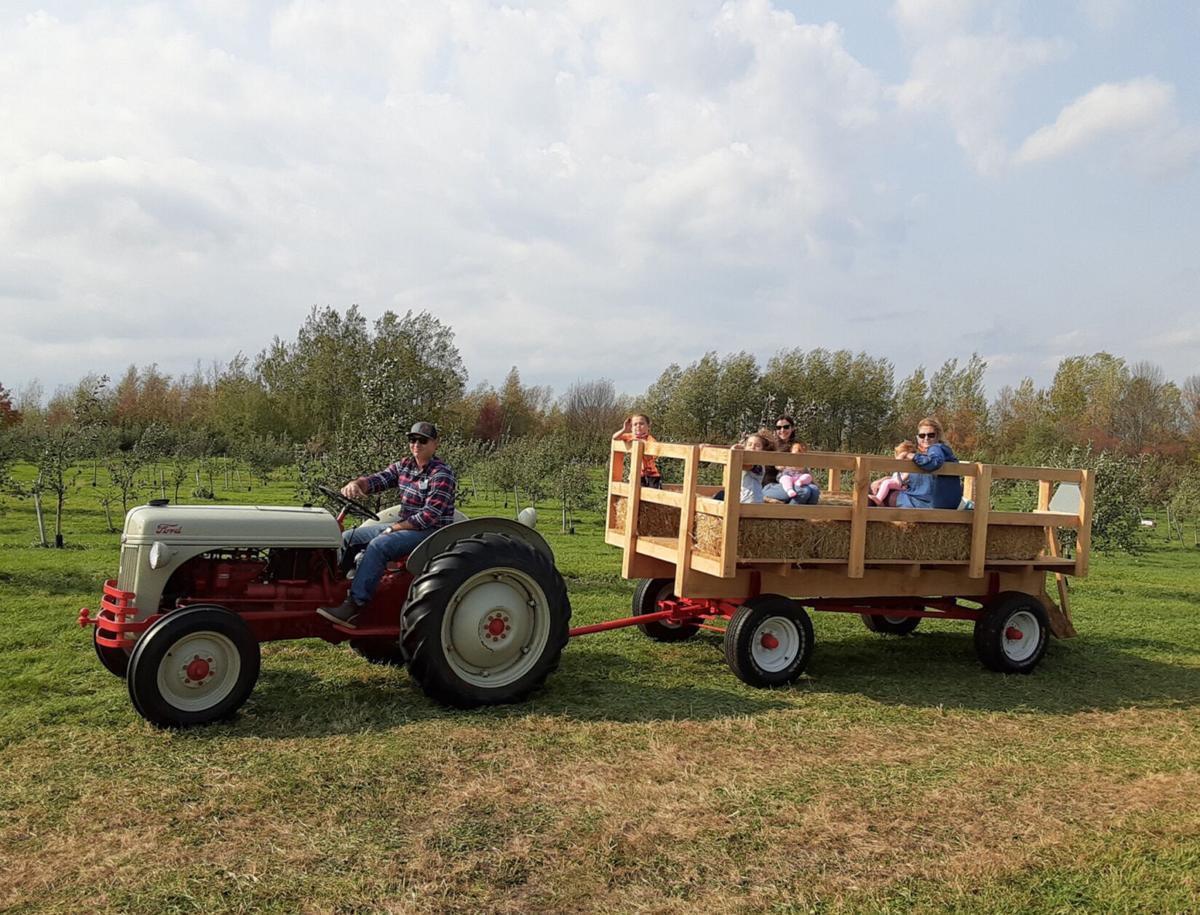 Visitors to Prairie’s Orchard, just east of Malone, enjoy a tractor-pulled hay-wagon ride through the orchard on a recent weekend. Photo provided 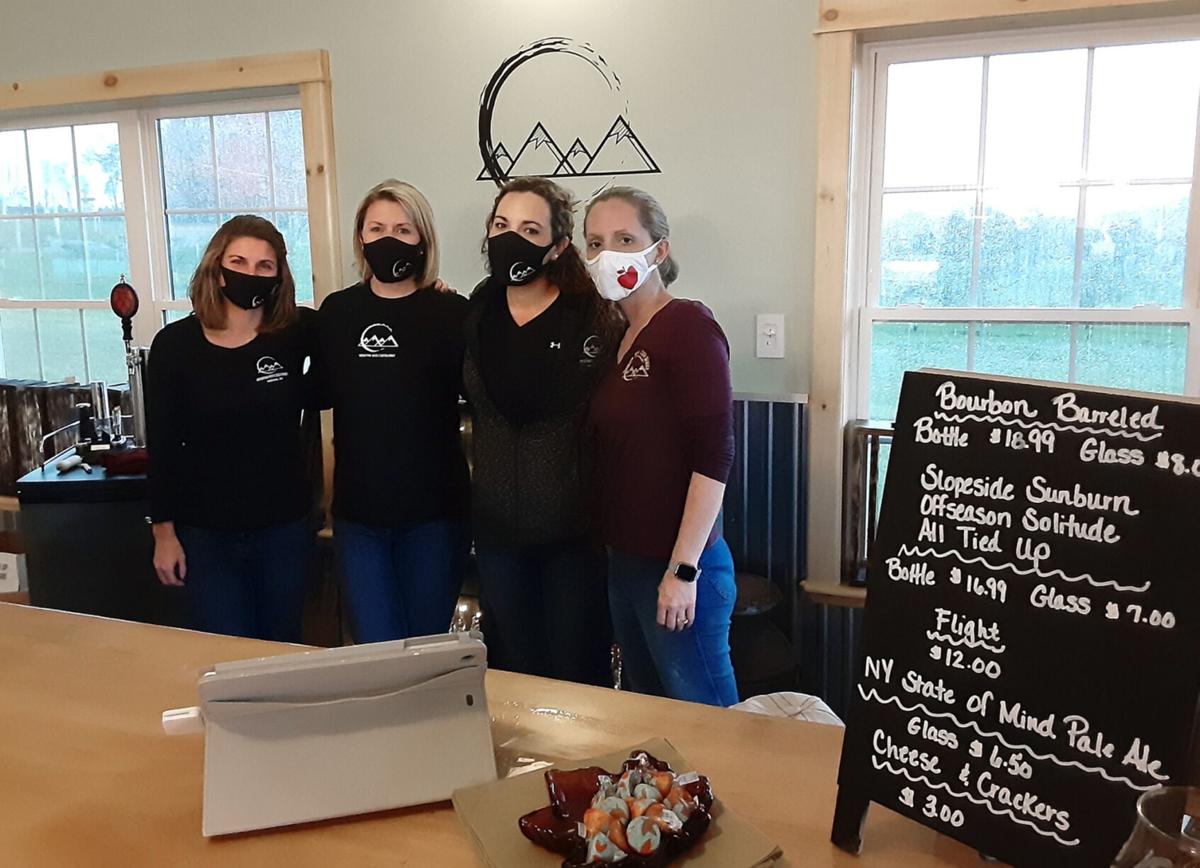 Sixty Honeycrisp trees were planted by Dan and Brandyn Prairie in 2014. Photo provided

Visitors to Prairie’s Orchard, just east of Malone, enjoy a tractor-pulled hay-wagon ride through the orchard on a recent weekend. Photo provided

Sixty Honeycrisp trees were planted by Dan and Brandyn Prairie in 2014. Photo provided

New York is the nation’s second-largest apple producing state. With more than 10 million trees, our roughly 600 commercial apple growers produce, on average, 29.5 million bushels of apples annually. And they grow more varieties than producers in any other state –– among them: McIntosh (the national apple of Canada), Empire, Cortland, Rome, Gala and many others.

Our apple industry provides about 10,000 direct agricultural jobs (e.g. growing, packing), as well as roughly 7,500 indirect jobs (e.g. marketing, distribution). In 1976, New York’s policymakers designated the apple as the official state fruit. In 1987, they approved the apple muffin as a state symbol.

Northern New York is apple-growing country. And many of the orchards in our region are popular fall attractions. This past weekend, with leaf-peeping season near its peak, I was able to take in some truly spectacular foliage on my way to one of the area’s newest, Prairie’s Orchard –– a picturesque countryside farmstead located at the edge of the rolling Adirondack foothills, just east of Malone.

It was beautiful; early afternoon. The parking area was full. People of all ages were sitting at picnic tables in the yard or in Adirondack chairs on the front porch enjoying freshly baked donuts, tasty apples and cold drinks. Some were bringing pies, donuts, bottled drinks, and artisan cheese back to their cars. Others strolled around the grounds, enjoyed tractor-pulled hay-wagon rides through the orchard, played bean-bag toss games in the yard, or picked pumpkins from the pumpkin patch; then carted them back to the store and cider house (more about that later) in little red pull-behind wagons.

Dan Prairie, who with his wife, Brandyn, purchased their property on Franklin County Route 24 in 2013, somehow found the time to visit with me to convey how they started the orchard by planting 120 trees; 60 Macintosh and 60 Honeycrisp; in 2014. They’ve planted an additional 200–300 trees every year since, including several new and traditional varieties.

At first, they selected only semi-dwarf varieties but, more recently, they’ve taken to planting dwarf varieties using a trellis system. Trellising simplifies training, promotes uniformity, reduces labor, and increases the fruit-bearing area of the trees. And, because of the evenly spaced limbs and short tree stature, the fruit is easier to reach for when picking.

For Brandyn Prairie and three friends –– Tara West, Kelly Walfield, and Tiffany Richards –– what began as an experiment quickly morphed into a small business idea. They had a talent for making great hard cider from the fresh, wholesome apples grown in the orchard and, before long, were committed to the craft. And to maybe becoming apple cider tycoons.

Earlier this month, Mountain Miss CiderWorks, the first and only craft cider house in the North Country (at least as far as I can tell) and a woman-owned business, began offering four varieties of sparkling, slightly carbonated, craft cider to the public; cranberry, semi-dry, sweet, and bourbon-barrel aged.

I tried their bourbon-barrel aged cider and it was fabulous! Crisp. Refreshing. Easy to drink. A delicious, appealing alternative to either beer or wine that would, without doubt, compliment salmon, shrimp, oysters, steak, roasted turkey, grilled vegetables, aged cheeses, nuts, bittersweet chocolate --- I could go on.

As a whole, the hard cider industry is relatively small, especially when compared to wine and beer markets. But it wasn’t always that way.

The early English settlers planted apple seeds and cuttings they’d brought with them from Europe, perhaps as early as 1607. The apples that they eventually harvested weren’t eaten, however. They were used to make hard cider, which was often safer to drink than the water. Even children drank it in a diluted form. It could be made into vinegar as well, and used to preserve fresh foods. And it was accepted as payment for wages, taxes, and tithes.

By the late 1800s, with the arrival of large numbers of immigrants from Ireland and Germany, and the availability of cheap Midwestern grain, beer began to replace cider in urban marketplaces. Still, hard cider remained popular until prohibition was established, in 1920, at which time apple growers replaced their preferred cider-variety apple trees with dessert varieties; many of which are still popular today. When prohibition ended, and beer, wine and spirits became readily available, hard cider all but disappeared as a commercially available beverage.

Until now. In recent years there has been a resurgent interest in cider. And today it’s one of the fastest-growing segments of the alcoholic beverage industry.