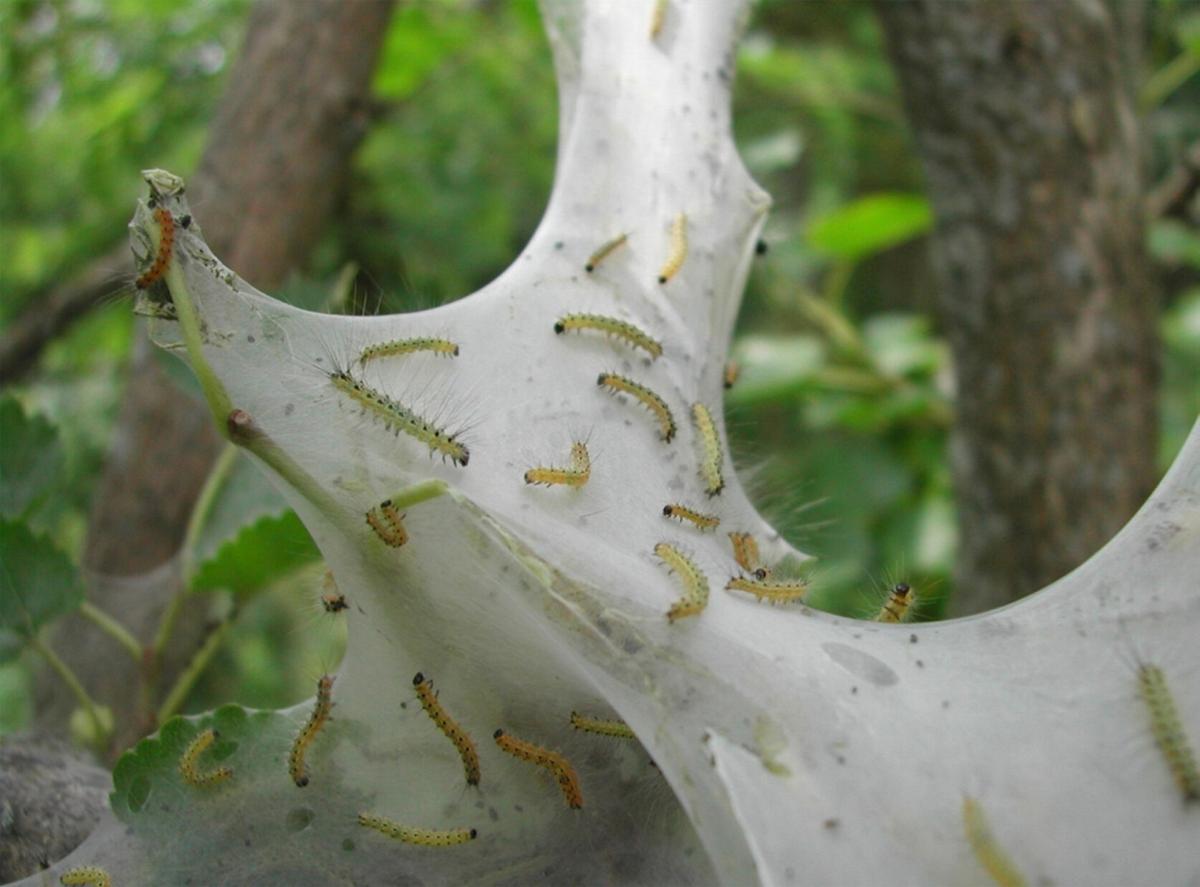 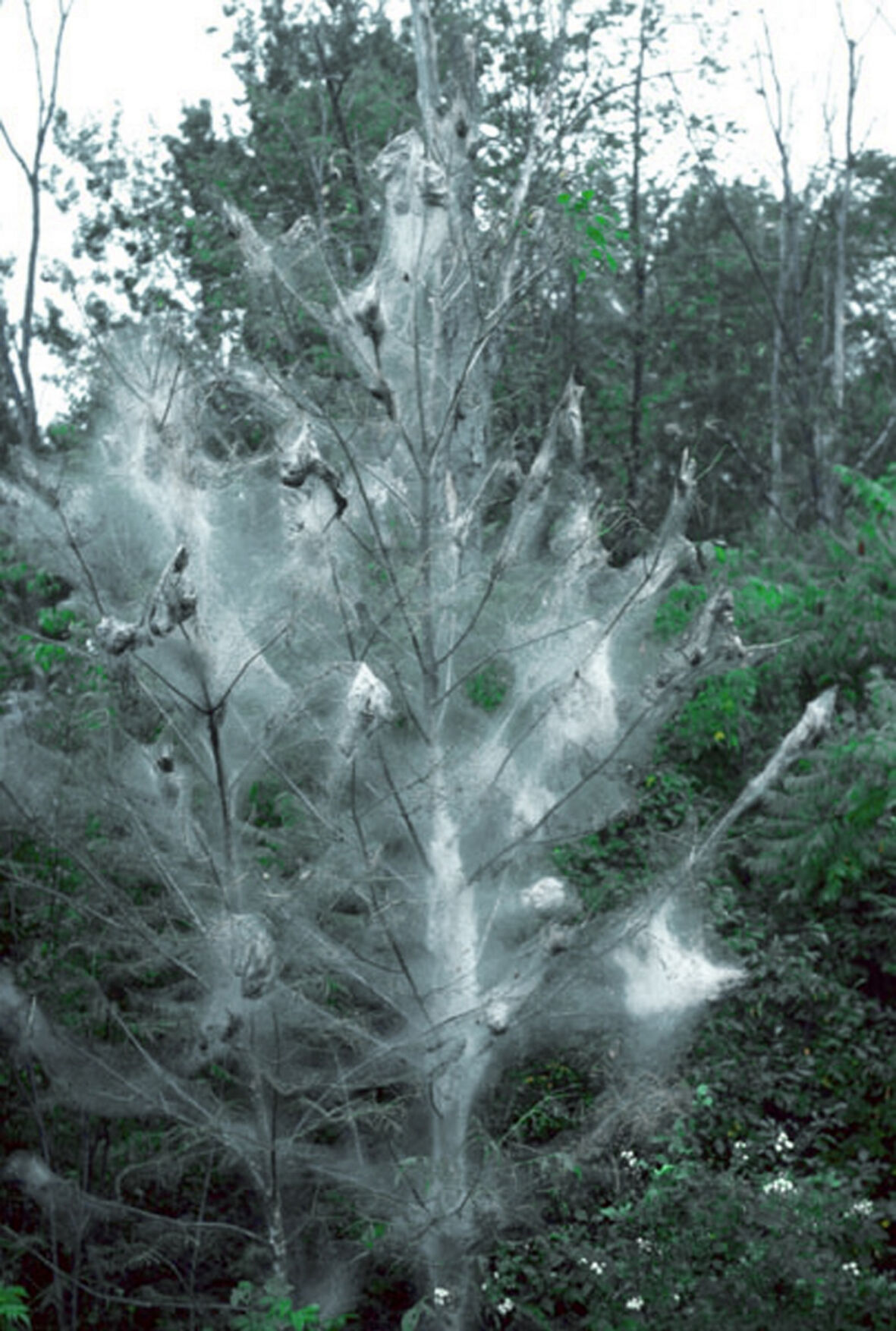 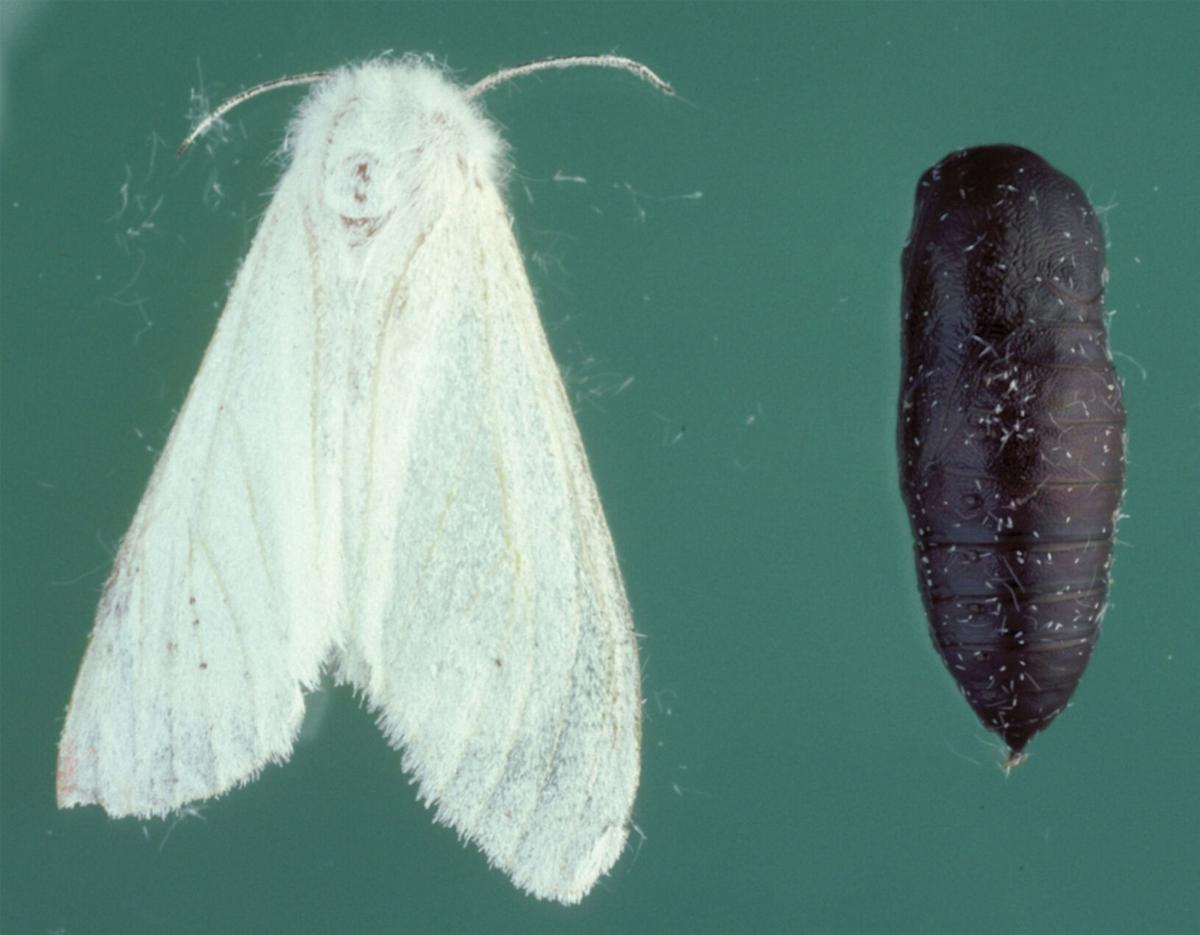 It’s starting to feel very much like fall around here. Days are getting shorter, leaves are changing color, temperatures are cooler (some of us have already seen a frost or two; even a freeze), air conditioners are silent, pumpkin-spiced food and beverages are available at several coffee shops and fast food establishments, schools have reopened (sort of), and fall webworms are here en masse in places all across the North County.

Several localities have seen major hatches over the past three weeks. And people have been asking me about them after discovering a favorite ornamental or shade tree covered with, as one person described them, cobwebs; looking more look like something that should be alongside a spooky old haunted house in a creepy horror movie about menacing giant spiders than in a well-kept yard-and-garden landscape.

Fall webworm caterpillars spin webs that envelop entire branches or groups of branches and feed on many varieties of deciduous trees. They feed inside their webs, completely consuming the foliage; leaving only the mid-veins. Skins cast off by the caterpillars when they molt, fecal pellets, and dead leaf debris accumulate within the web, giving it an even messier appearance.

Even when the caterpillars are present in numbers so great that they enshroud nearly every limb in nests and completely defoliate a host tree or shrub, the damage is, with few exceptions, a lot less serious than it appears. The one exception to this may be in young trees that have yet to become established.

As summer winds down, plant growth slows. Trees are already preparing for winter dormancy and have stored up enough nutrient reserves to survive. Since the leaves have already performed their service, the loss of them generally has little effect on the health of the host. The empty webbing may persist well-into the winter before falling part however, although unsightly, it won’t cause any further damage. Infestations tend to be episodic in nature, with back to back bad-webworm-infestation years rarely occurring.

The fall webworm is a native moth that occurs across almost all of the continental United States, southern Canada, and northern Mexico. They were accidently introduced into the former country of Yugoslavia in the 1940s, and since then have expanded their range to include most of Europe, as well as parts of China, North Korea, and Japan.

Given its wide geographical range, it’s not surprising that there is variability in the appearance of both the adults and the larvae, which are divided into two genotypes; each named for the color of their head capsules; black-headed or red-headed. Pure white adults and black-headed larvae predominate in northern regions, whereas spotted adults and red-headed larvae predominate in southern regions.

Although there may be two broods of fall webworms annually in some areas of New York state, and southern populations may complete as many as four generations in a single year, the insect has only one generation per year in our region.

The life cycle begins when the not-often-noticed white, adult female moths lay as many as 1,500 eggs in a single mass on the underside of a host plant’s foliage leaf. She will then cover the eggs with bristles from the underside of her abdomen to protect them. The eggs hatch into tiny larvae and immediately start building a web, which protects them from predators. At first, the web encircles only a few leaves at the growing tip of the limb. But as the caterpillars grow, they expand the web down the limb, covering more and more foliage and devouring more and more leaves.

Larvae stay in the colony until their last molt, after which they are about an inch and a half long. They then crawl down the tree trunk or descend to the ground on a strand of webbing and seek out a protected place to spin a somewhat-fragile cocoon and pupate in the debris at or just below the soil surface, where they will overwinter. They emerge as adult moths in the spring, mate, and the cycle begins again.

As with all pests, it’s easiest to get rid of fall webworm caterpillars when they first start appearing in your trees. So keep a close eye out starting in late summer. Webs are always on branch ends.

You can easily poke holes in the nests to break them apart using a long stick. Once the webs are broken open, the nests can be easily raided by predators.

Although fall webworm damage is rarely severe, keeping your trees healthy is always important. Water trees in your yard during dry periods, and avoid wounding trees or compacting the soil within the dripline. Maintaining tree health will help your trees recover from defoliation and other stresses and keep them looking good year-round.