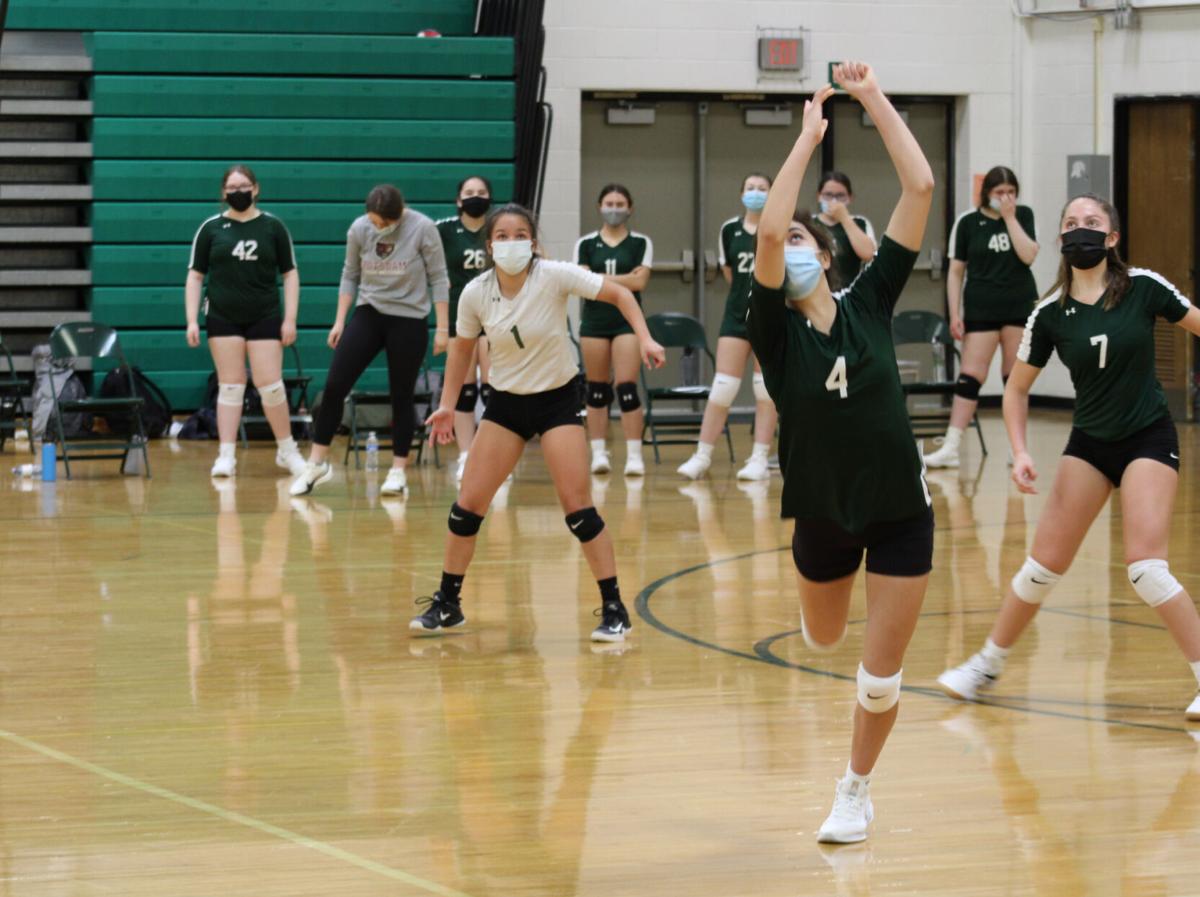 Wynter Jock lunges for the ball, in a game against Franklin Academy volleyball. Salmon River lost its first game of the season to the Huskies, after winning its previous three contests in straight sets. Vin Gallo/Malone Telegram 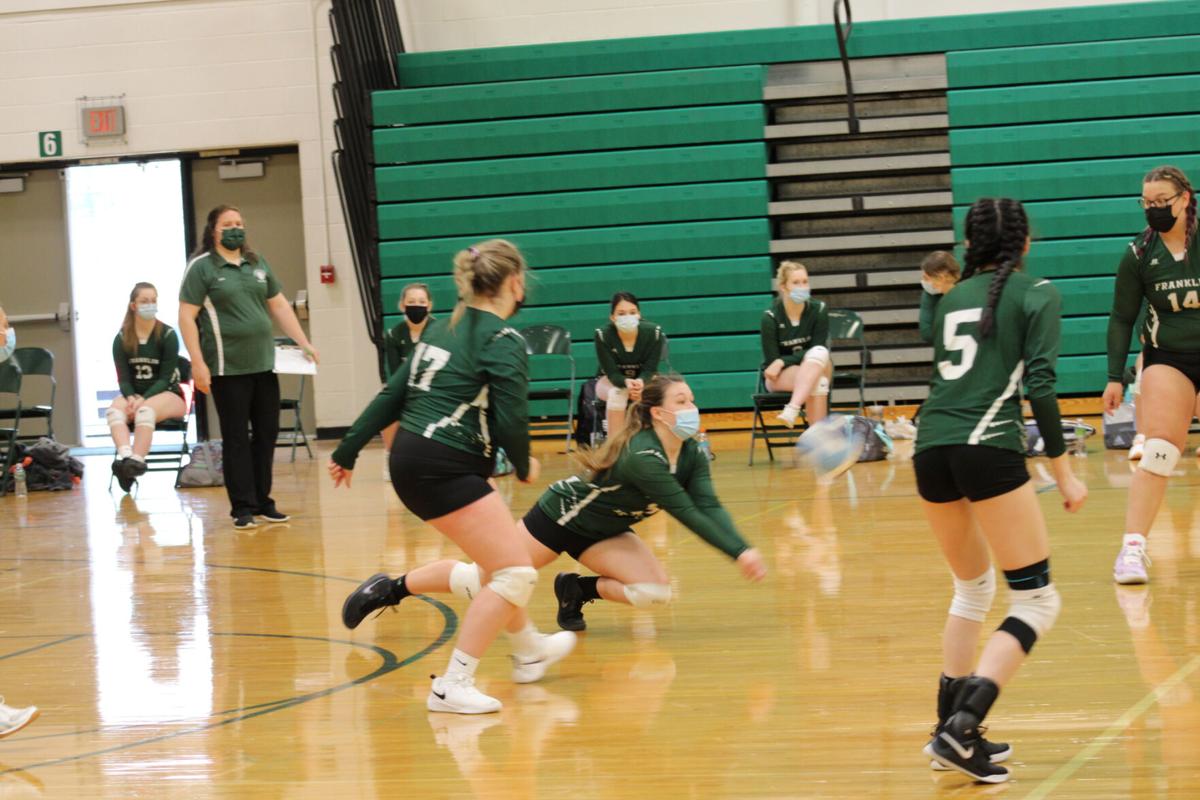 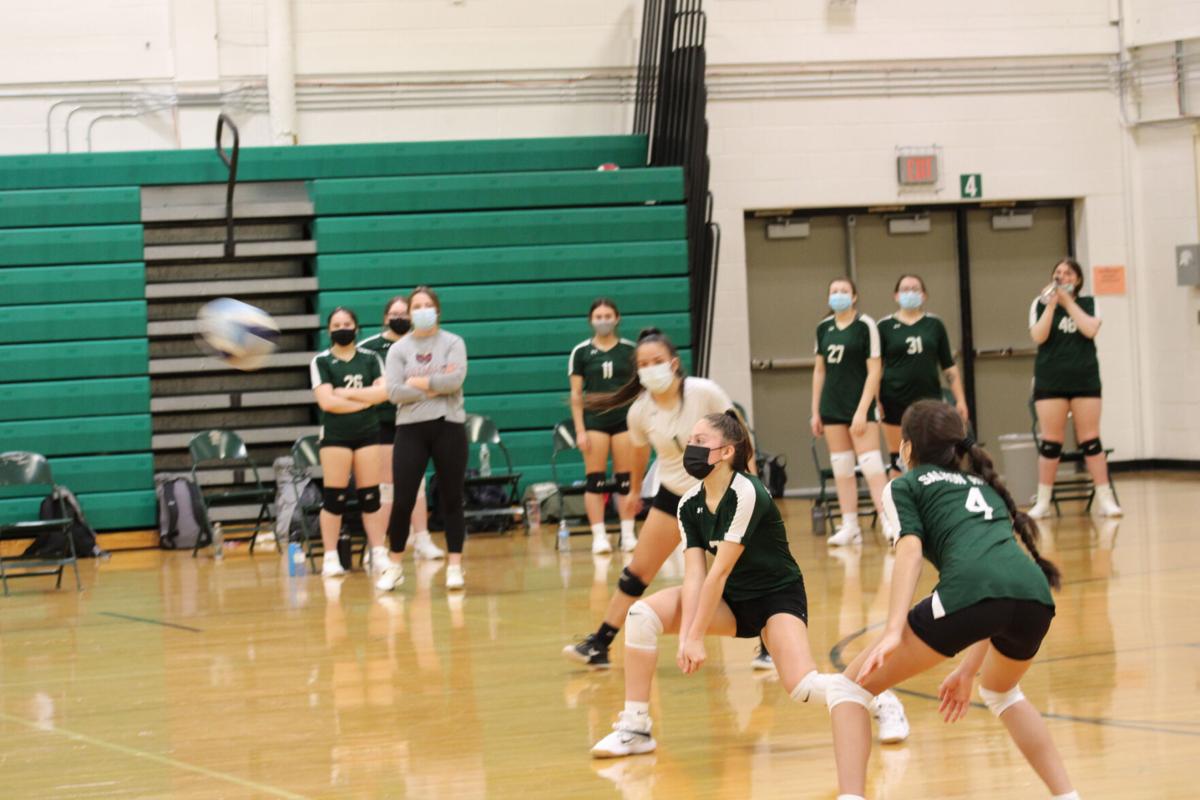 Kendall Jock records a dig, in a game against Franklin Academy volleyball. Salmon River lost its first game of the season on Sunday, falling to the Huskies, in five sets. Vin Gallo/Malone Telegram

Wynter Jock lunges for the ball, in a game against Franklin Academy volleyball. Salmon River lost its first game of the season to the Huskies, after winning its previous three contests in straight sets. Vin Gallo/Malone Telegram

Kendall Jock records a dig, in a game against Franklin Academy volleyball. Salmon River lost its first game of the season on Sunday, falling to the Huskies, in five sets. Vin Gallo/Malone Telegram

MALONE — Before breaking for their sideline at the start of each timeout, in their match against undefeated Salmon River volleyball, the Franklin Academy Huskies made a point to let out a small, short, “woo.”

It wasn’t much, in hindsight. The exclamations ricocheted throughout the empty gym — echoing off the folded bleachers.

But it was something. A flicker of passionate embers. A spark.

The self-generated enthusiasm helped carry Franklin Academy (3-1), to a five-set victory over Salmon River (3-1) — a team that, prior to Sunday, had not lost a single set in the abbreviated Fall II season.

“It was a matter of Malone having some really great confidence in the beginning,” Shamrocks head coach Cashlynn Colbert said. “They were really positive, they were really loud and it kind of got into our girls’ heads a little bit.

“And I think (Franklin Academy) started to pick it up, as they realized their own skill level.”

But a flurry of mistakes for Salmon River opened the door for Franklin Academy to close the contest out, 25-19, in five.

Huskies head coach Amanda Gadway said it was crucial for her team to both mentally and physically prepare for Sunday’s game, following a four-set loss to Chateaugay, Saturday.

The Shamrocks come back from 2-0 down in the match to force a fifth set. They take the fourth frame, 25-22. pic.twitter.com/VzjKCtdlWd

“We knew today was going to be a harder game, coming from a loss yesterday … the girls were a little bit on the downside,” Gadway said.

“So, we definitely wanted to come in with a positive mentality, right from the start.”

Franklin Academy, to begin the final set of the match, needed to smooth out some knots, as Husky miscues helped Salmon River to a 4-0 advantage.

Each team would go on to tie the other once, before Maddie Major (three kills, three aces), pinned a kill within the Shamrocks’ left back line. This made it 8-5, in favor of the Huskies, who seized crucial momentum on the play.

Salmon River’s Kendall Jock would record a couple kills and an ace, after Major’s strike, leading the Shamrocks to a 13-10 lead. But an ace from Major and a 4-0 run by the Huskies afterward, erased Salmon River’s final lead of the day.

The Huskies would go on to outscore the Shamrocks, 11-5, the rest of the way.

Salmon River leads 16-15, in set 4. Kendall Jock with a kill early in the set to keep momentum for the ‘rocks. pic.twitter.com/p5PnZMO5Uo

“We were moving to the ball a lot better than yesterday — getting low, reading the hit off of the set and getting right there to that first pass off from the serve,” Gadway said.

Although late game mistakes washed away their chances for a fourth straight, 2-0 comeback victory, Salmon River still proved a tough out for its opponent, after falling under a fog that cost it its second set.

Franklin Academy is up 13-2 on the Shamrocks to begin the 2nd set. The Huskies have jumped right out of the timeout and taken all the energy from Salmon River. pic.twitter.com/wdCkhvuCl6

A kill and an ace from Genesis Reyes in the first set helped the Huskies put together an 8-0 run in the opening set — which gave Franklin Academy enough momentum to pull out the initial 25-18 win.

“After the second set I just told them, they’re much better players than (how) they’re playing,” Colbert said. “They have much better skill levels than what they were demonstrating and they needed to build their confidence, start talking — talk about what’s happening with the ball, where it’s going to be, start making the empty gym sound a bit louder…”

A kill by Alanna Dumas puts the Huskies up 3-1 early in the third but the ‘rocks respond and lead the set 7-4. pic.twitter.com/m99ahc3n6C

Following an ace from Savannah Swamp, to tie the third set, 11-11, Salmon River pulled away in the frame, never trailing again in the set.

“They definitely had a couple more hits than they had those first two sets and they caught us off guard,” Gadway said. “One thing I had mentioned going into the fifth set id that we had to cover the ball, especially with those gaps that they were hitting — we weren’t getting to, in time.”

Franklin Academy would recover, however, and just outpace Salmon River, 50-41, the rest of the way, following the third set.

“Volleyball is such a (mental) game and I tell my girls that constantly. You, seriously, fake it ‘till you make it. I said that a million times today,” Colbert said.

“It’s really all about showing confidence, whether you have it or not — being positive, being loud on the court and that will get in the other team’s head.”