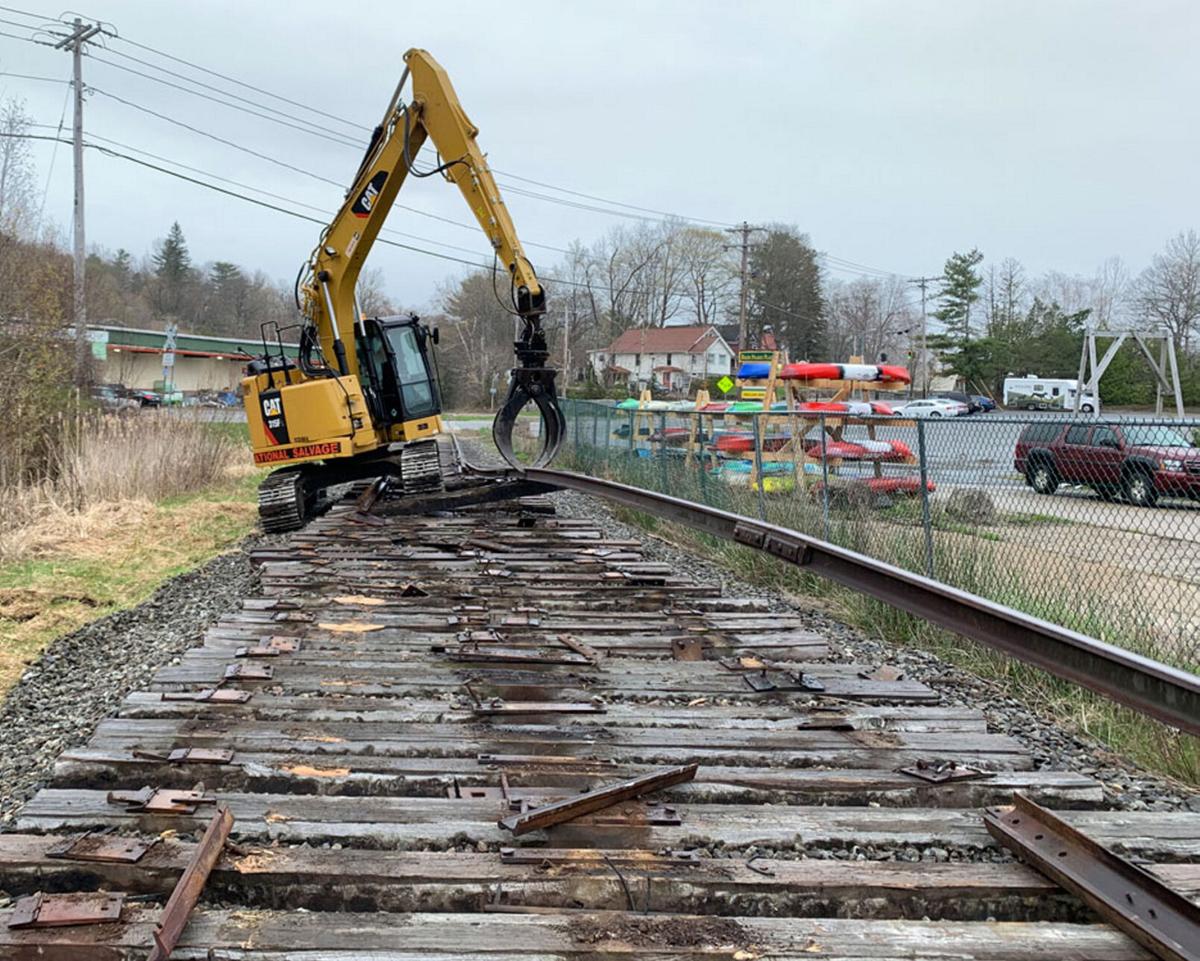 A National Salvage excavator pulls out a rail on the former train tracks near the Broadway crossing in Saranac Lake on Tuesday morning. Peter Crowley/Adirondack Daily Enterprise 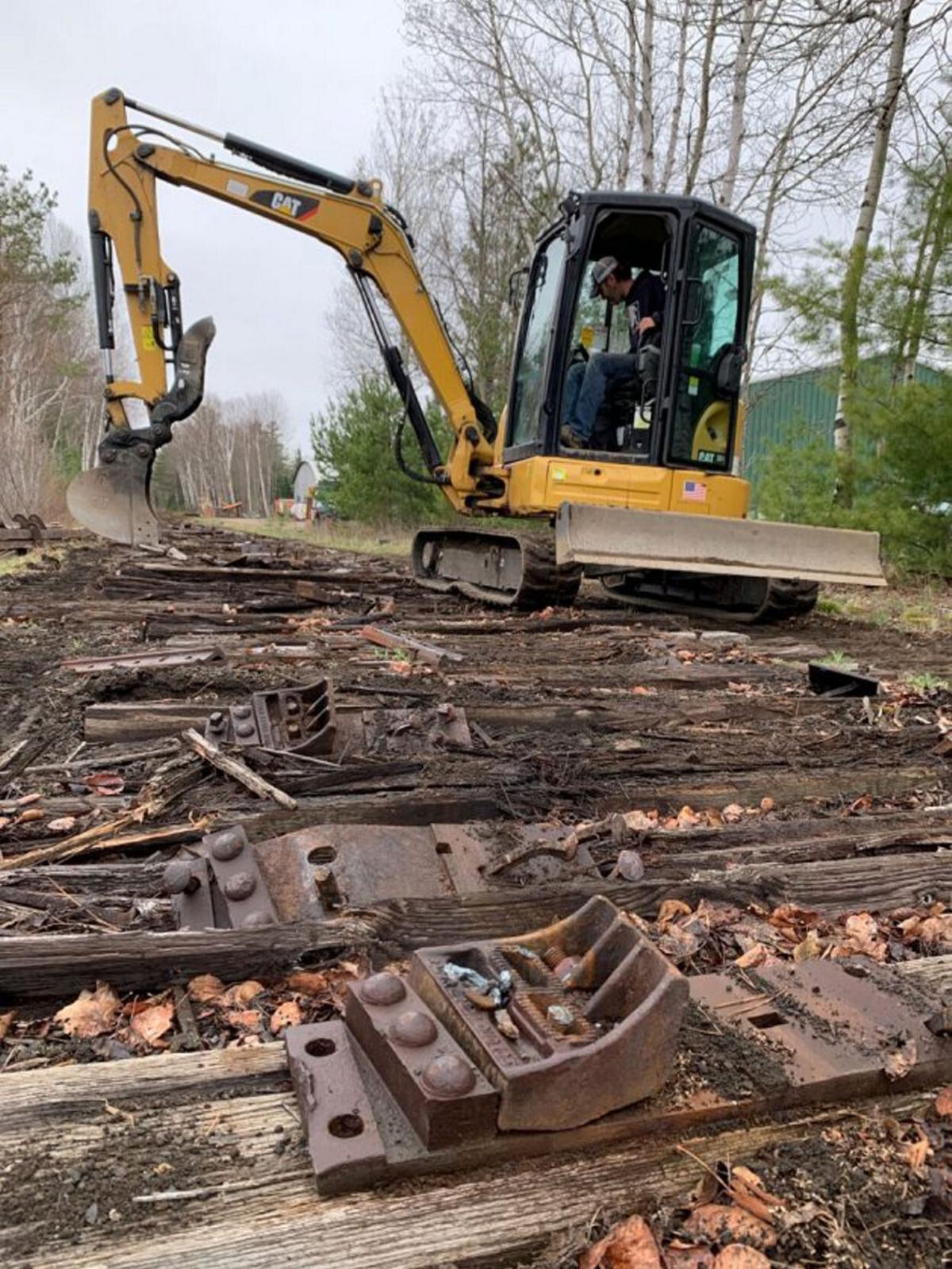 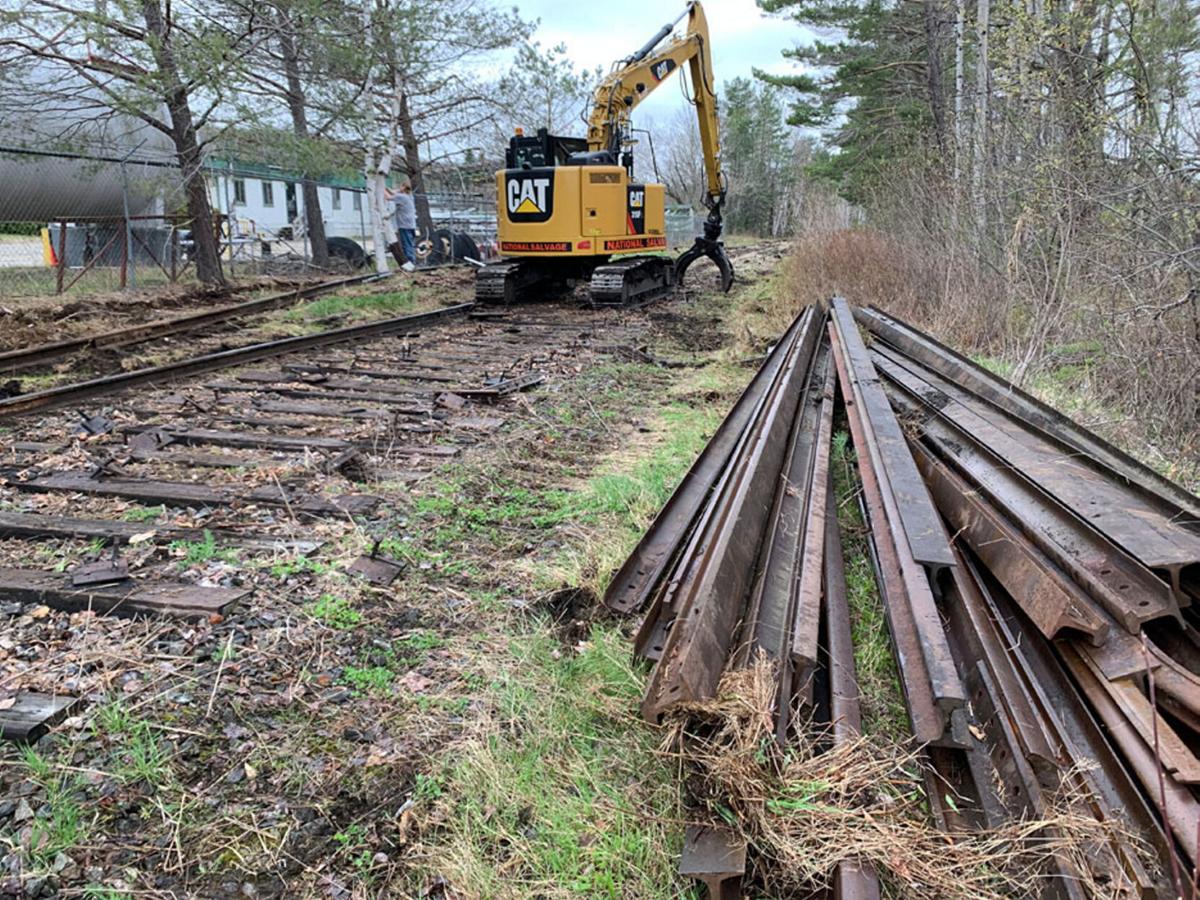 A National Salvage excavator pulls out a rail on the former train tracks near the Broadway crossing in Saranac Lake on Tuesday morning. Peter Crowley/Adirondack Daily Enterprise

SARANAC LAKE — Advance crews had already unbolted the steel rails and cut them with a blowtorch on either side of road crossings. That set the stage for another crew to pull out the train tracks — which is now happening in Saranac Lake.

A Virginian with a thick Southern accent worked a Caterpillar excavator Tuesday morning near the Broadway crossing beside Kinney Drugs. After maneuvering the vehicle’s tracks into the right position, he manipulated its claw to pinch each rail and lift it with a clang — pulling also the big railroad nails and other hardware out of the wooden ties, many of which were rotted.

Once pulled, the rails were stacked in a pile beside the tracks, to be collected later by a crew with a giant magnet and a dump truck.

This railroad-removal job started last summer in Tupper Lake. It moved slowly and steadily through the fall and winter, and now it’s hitting Saranac Lake this spring. It’s being done by National Salvage, a company hired by the state of New York, which owns the tracks. National Salvage will try to resell the steel for scrap, along with whatever ties are salvageable.

Debate over what to do with the corridor had been raging for years before 2014, when the state made a split proposal: Renovate 45 miles of tracks south of Tupper Lake for train use, connecting to Utica, and remove 34 miles of tracks between Tupper Lake and Lake Placid, turning that section into a trail for biking, snowmobiling, running and other recreational uses. The idea was controversial, but it held up through public hearings, Adirondack Park Agency reviews and a lawsuit by a nonprofit corporation that ran tourist trains. The Adirondack Scenic Railroad operated between Saranac Lake and Lake Placid from 2000 until 2016, when the state made it stop. The train that left here that October was perhaps the last ever.

Not far behind the rail puller Tuesday morning, Heath Desmarais of Tupper Lake used a mini-excavator to pop the remaining metal plates off the ties. Desmarais said he has been on this job since late last summer (except for March, which the company took off), working his way east from his hometown.

Desmarais said ties and everything have been removed from Tupper Lake to around Floodwood Road, and that the steel has been removed from the side of the tracks all the way to the state fish hatchery in Lake Clear.

On a stretch of open corridor, Desmarais said Mike can pull a mile-and-a-half to 2 miles of track in a day, and he can cover half to three-quarters of a mile a day pulling plates. He said their progress will be slowed in the village of Saranac Lake, with all the road crossings and finding spots to fit the steel.

Desmarais said the railroad was in rough shape. He has pulled plates from Hoel Pond to Saranac Lake, and he estimated that only 5 to 8% of the railroad ties were reusable in that stretch (between 12 and 15 miles). Most ties have some rot, and many are rotted through. He also said the ballast — the stone placed between the ties to help hold the railroad in place — had largely deteriorated into sand and dirt.

“If you were to want to run anything on there, the way it was, you’d have to replace everything,” he said. “It would have to be completely ripped up, re-substructured, then everything new on top. … They were completely useless in the condition they were in.”

As a local, he said he is looking forward to the trail.

“I grew up on the tracks, so it’s like now we’re going to see some action,” he said. “It’s just always been a dead zone for kids to play. Now it’s actually going to do something.”

People who use it will get some nice views, he added.

“There are some swamps back there that are pretty nice,” he said. “Me being the only one out there early in the morning, it’s pretty vast.”

He mentioned a swamp near Lead Pond Road, east of Tupper Lake, and the Lake Colby causeway approaching Saranac Lake as favorite spots.

Some Saranac Lakers have complained that the metal debris being left for pickup could be unsafe. Asked about this, Desmarais said, “It’s kind of the nature of the beast, I guess. … It would kind of cost more and be a little more inefficient to move it out of the way and pick it up — it’s more times to handle it. The slower it goes, the more it costs to do. But them guys coming behind us, it’s only in that condition for a couple days.”