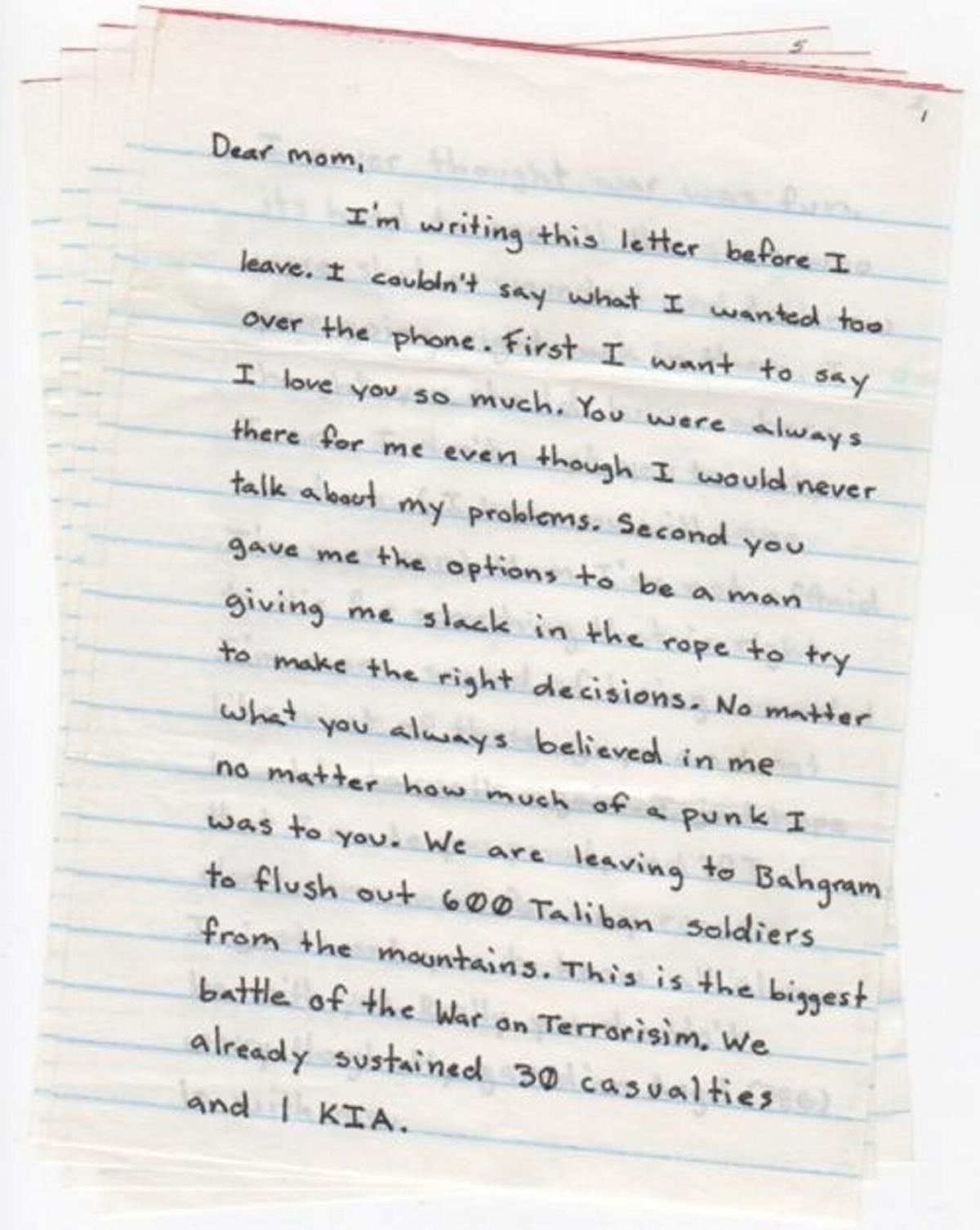 Sgt. Joshua M. Harapko, a soldier with the 10th Mountain Division at Fort Drum, wrote this handwritten letter to his mother, Pat Moran, before the battle of Tora Bora in Afghanistan in 2001. Harapko survived the battle and came home alive, but he then died in a routine training exercise at Fort Drum in 2003. Provided photo 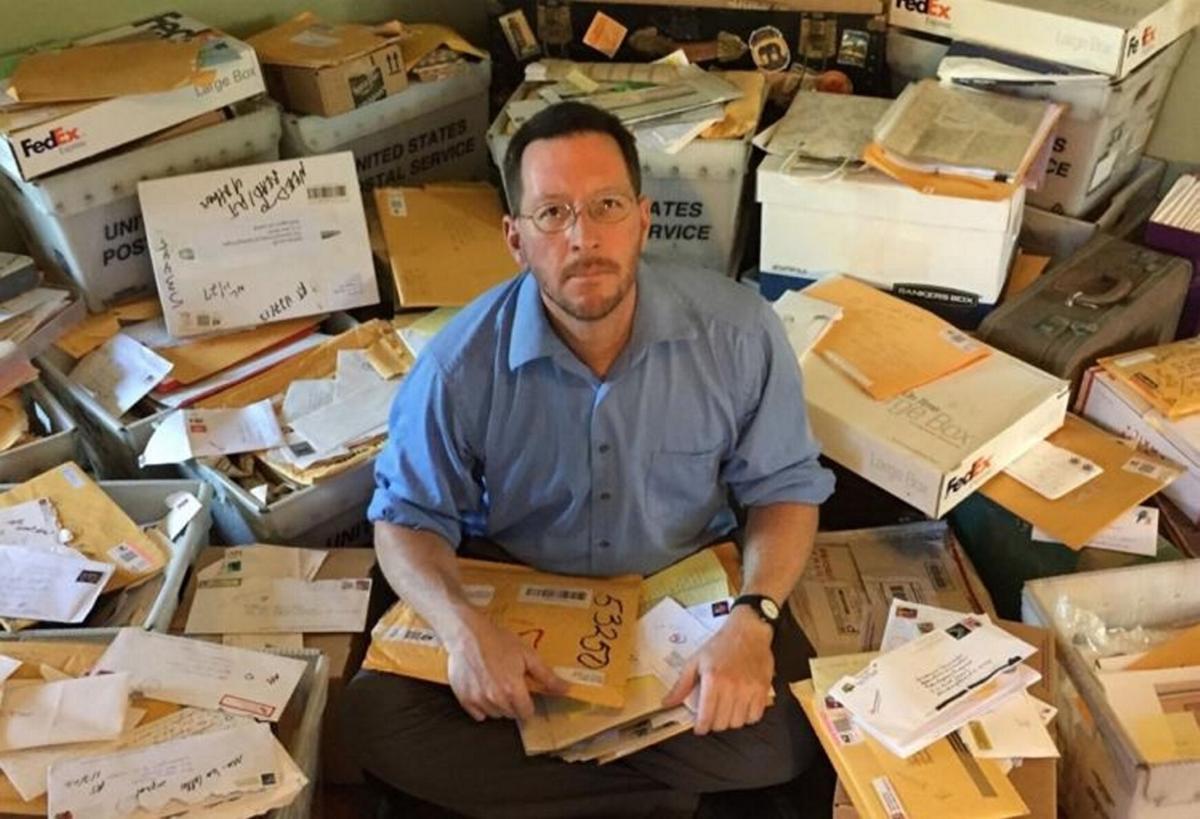 Sgt. Joshua M. Harapko, a soldier with the 10th Mountain Division at Fort Drum, wrote this handwritten letter to his mother, Pat Moran, before the battle of Tora Bora in Afghanistan in 2001. Harapko survived the battle and came home alive, but he then died in a routine training exercise at Fort Drum in 2003. Provided photo

Many important details of armed conflicts are contained in letters sent by those on the front lines.

These letters chronicle daily life during wartime. They express sentiments brought on by separation from family members.

They list items needed that aren’t in ample supply. And they highlight the bravery of comrades in arms, particularly those who have died.

These letters usually become cherished possessions for those on the receiving end. Tragically, many of them record the last words communicated by military personnel to loved ones.

The Center for American War Letters — based at Chapman University in Orange, Calif. — is an online presentation of correspondences from every U.S. war. The letters offer an extraordinary glimpse into what troops endure during the conflicts in which they’re engaged.

“The Center for American War Letters is a unique and extensive manuscript collection of war letters from every American conflict, beginning with handwritten missives composed during the Revolutionary War and continuing up to emails sent from Iraq and Afghanistan. These personal war-related correspondences are a vital record of the collective memory of the American people, as witnessed and articulated by service members, veterans, and their loved ones, who experienced these wars firsthand,” according to the museum’s website. “Tucked away in attics, closets and basements throughout this country are millions of letters written by men and women who have served in the U.S. armed forces. There are also countless emails being written by active duty troops who have been deployed to Iraq, Afghanistan and other countries around the world. These letters and emails are an irreplaceable record of the sacrifices made by military personnel and their families, and they need to be preserved. Many of these letters (and emails) are also extremely significant from a historical perspective, offering eyewitness accounts of famous battles, major world events, and encounters with prominent military leaders. But even the more personal messages, such as heartfelt expressions of affection or words of support and encouragement between separated loved ones, offer valuable insight into the wartime experience.”

Author and historian Andrew Carroll began the Legacy Project in 1998 to encourage people to preserve war letters they possessed. Many Americans shared their letters with him, and he eventually donated them to Chapman University. He serves as director of the Center for American War Letters.

“The overall mission of the campaign is to encourage anyone associated with the 10th Mountain Division to see if they have any war-related correspondences that can be used to honor and remember the sacrifices made by the division as well as allow them to be preserved and displayed,” according to a story published Saturday by the Watertown Daily Times. “The letters and emails that are collected will be shared with the public through educational programs for students, the Museum of American War Letters, the ‘Behind the Lines Podcast’ and will possibly be featured at local events in the future for guests to read.”

The Climb to Glory/War Letters Campaign was announced Saturday, the 78th anniversary of the 10th Mountain Division’s founding. This project will be a wonderful tribute to the sacrifices made by these service members and their loved ones. People wishing to donate letters may communicate with Carroll by sending emails to WarLetterProject@aol.com.