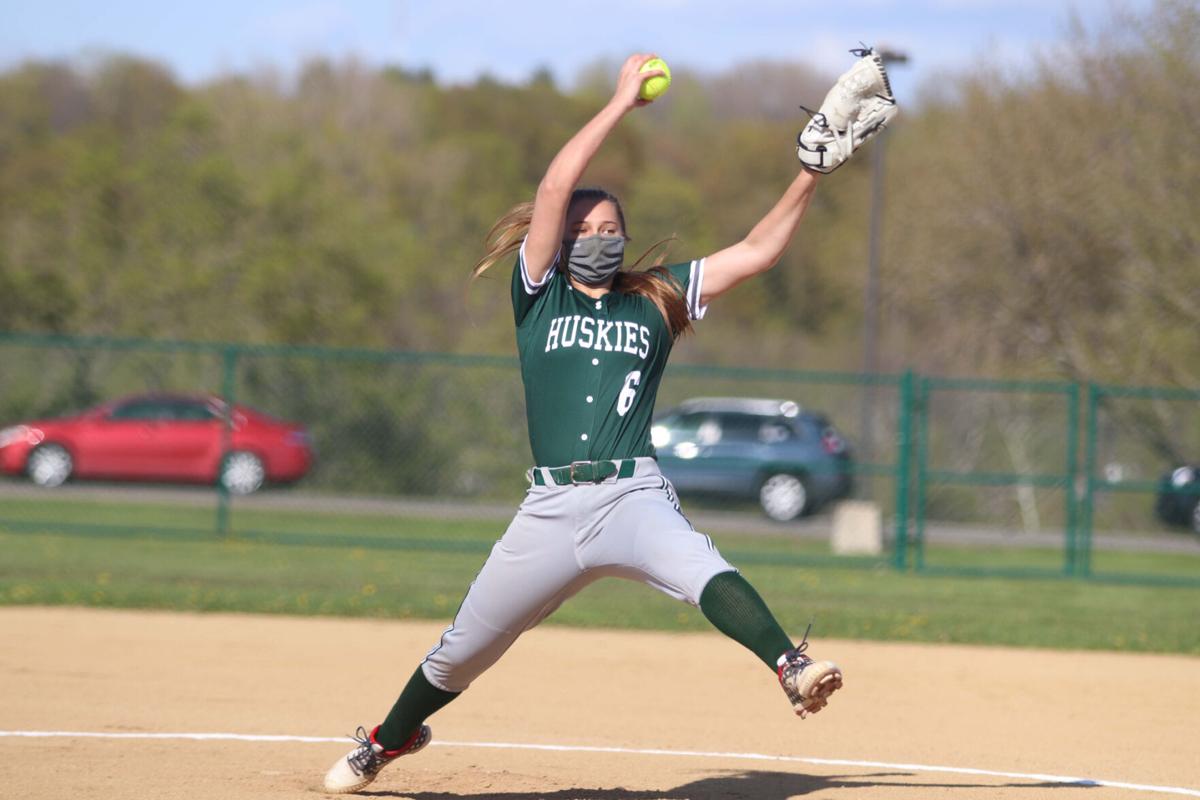 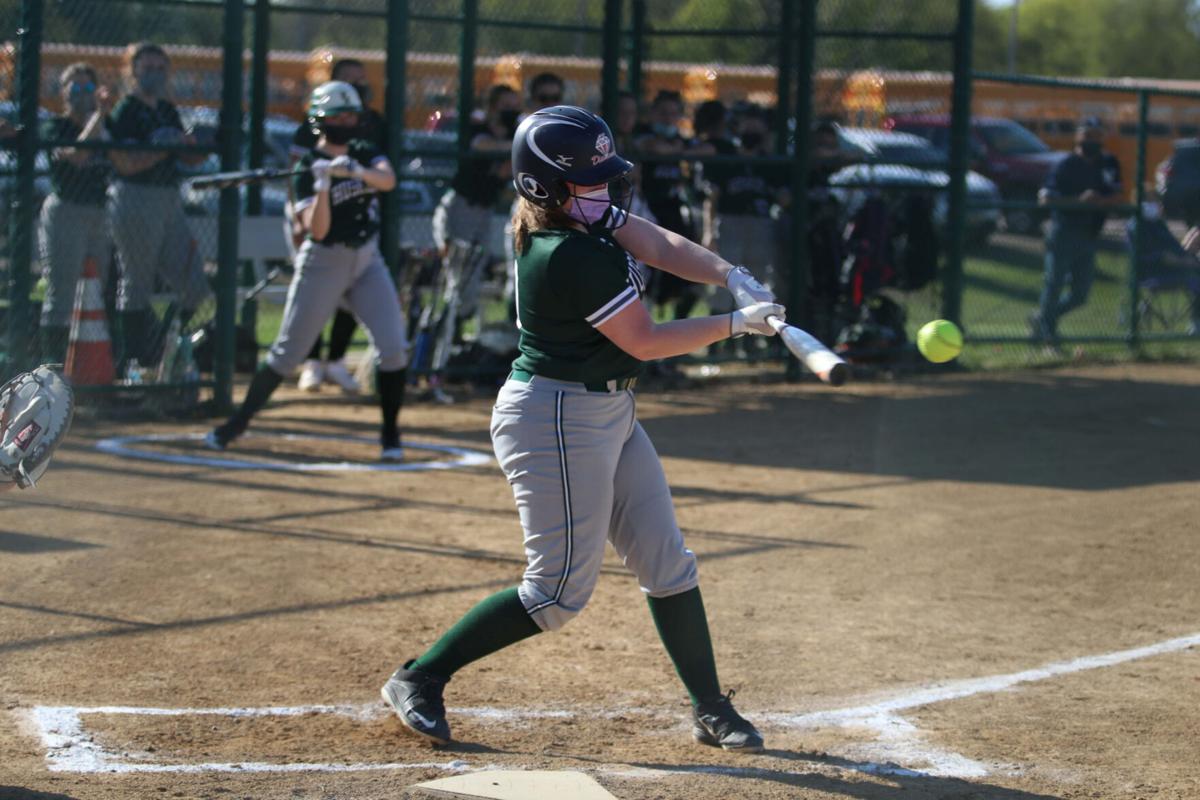 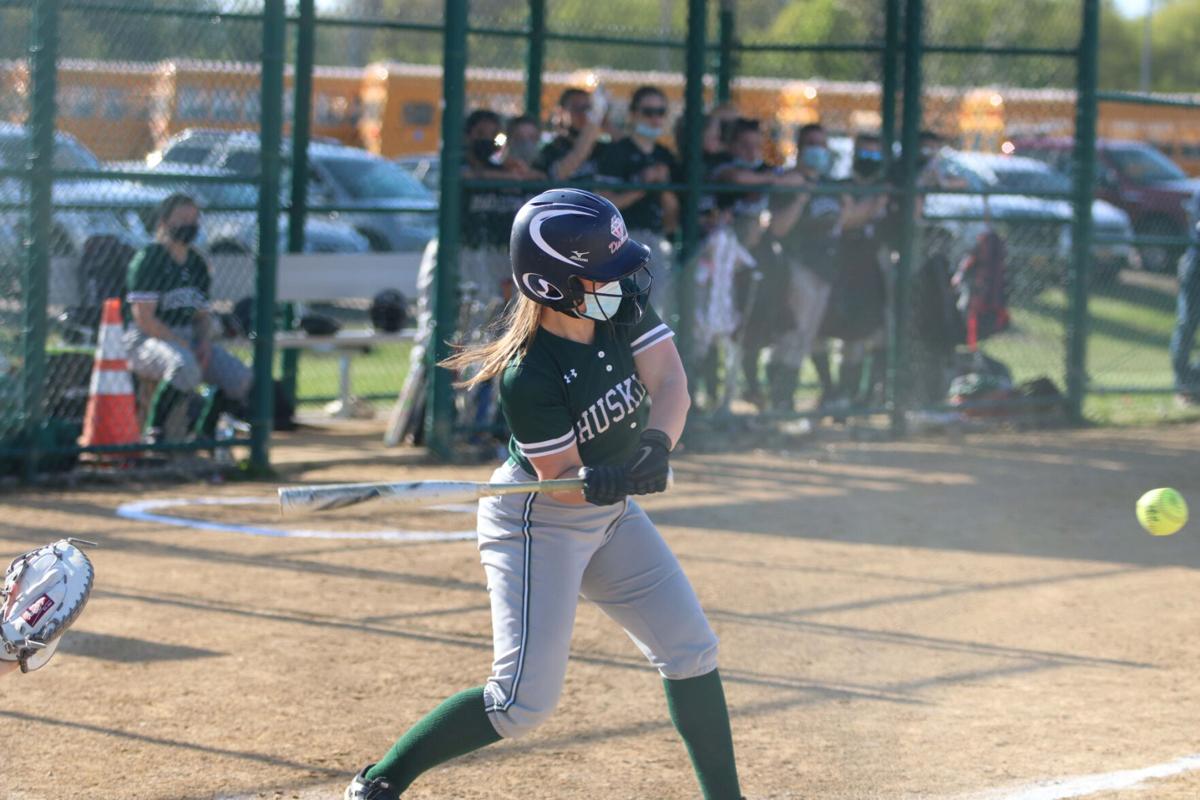 Alanna Dumas swings at a pitch. Dumas had a would-be run for Franklin Academy called back on an obstruction call in the fourth inning. Evan Wheaton/Malone Telegram

Alanna Dumas swings at a pitch. Dumas had a would-be run for Franklin Academy called back on an obstruction call in the fourth inning. Evan Wheaton/Malone Telegram

MALONE – Franklin Academy softball needed a spark at the plate in the bottom of the fifth.

Stepping up to bat, the senior pitcher slammed the ball out at center and over the fence. The home run brought in Breigh Nelson after she was on from a base hit. The play cut into the Huskies’ five-run deficit.

“It felt really good to get the game going,” McCauley said. “I was not hitting very well before that.”

Huskies are on the board. McCauley hit a two-run home run to cut Franklin Academy’s deficit, 5-2. We now enter the top of the sixth. pic.twitter.com/TbwsyMniG8

That is, until McCauley’s homer, of course.

“That was my goal for this season, was to hit one over the fence,” McCauley said. “That was pretty awesome.”

In a battle for control of the Northern Athletic Conference Central Division, Canton ultimately came out on top, 6-2 in Malone.

Before two of the top Section 10 softball teams battled it out, there was a last second change for the Golden Bears’ field. According to Canton coach Michael Wentworth, star pitcher Emily Wentworth was switched to first base after tweaking her knee during warmups.

Alguire came off pitching a perfect game on Wednesday while Wentworth was dealing with a minor wrist injury. The Huskies (5-1) knew they weren’t just facing the top team in the NAC Central – they were facing the field with the most depth.

“We knew that (Alguire) was a really good pitcher, and that we had to be ready to hit the ball,” Franklin Academy coach Terry Collins said. “Heads up, they play a lot of small game. We had to work on both infield and the outfield. A few miscues cost us I think, but I think now that we played them, we’ll be ready for them next time.”

Lexis Huiatt ran home on a wild pitch at the top of the first for Canton. Natalie Warner then hit a triple off McCauley the following inning and slid home soon after to take a 2-0 lead. McCauley retired the sides with three strikeouts in the second frame.

Wentworth the third out to retire the sides.Lexis Huiatt ran home on a wild pitch to give Canton a 1-0 lead heading into the bottom of the first. pic.twitter.com/cOSiuPcIbS

After Alguire scored a run in the third, the Huskies had a run of their own by third baseman Alanna Dumas negated from an obstruction call.

“I didn’t really see that, because she didn’t actually have the ball, but they were calling obstruction between second and third and not home plate,” Collins said of the call on the field. “But I honestly feel if he was going to call it, that he should have called it first and not another coach to be honest with you. But it is what it is.”

Obstruction call in the field negates a would-be run for Alanna Dumas. We now enter the top of the fifth, score remains 3-0 Canton. pic.twitter.com/8lgFfiUixZ

After a scoreless fourth inning, Brooke Larrabee hit a double on a 1-2 pitch for two RBIs. Alguire was batted in for the final run of the game at the top of the seventh.

McCauley knew what she wanted to bring to the cage ahead of the divisional duel.

“No fastballs. Mechanics win. All spins, because they’re all good hitters,” McCauley said. “I don’t want to give them anything easy.”

McCauley threw 12 strikeouts. She had one objective in mind on the mound.

“Know where I am and line up spins,” McCauley said. ”There’s a lot of lefties, I know they switch a lot.”

Sitting at second place in the NAC Central, Franklin Academy has the once hyped up battle with the Golden Bears in the rear view.

“Hopefully it will give them a different mindset to work harder and we’ll be more prepared to play Canton, since they’re one of the best teams,” Collins said. “They are, all around, a great team. There’s no doubt about it.”