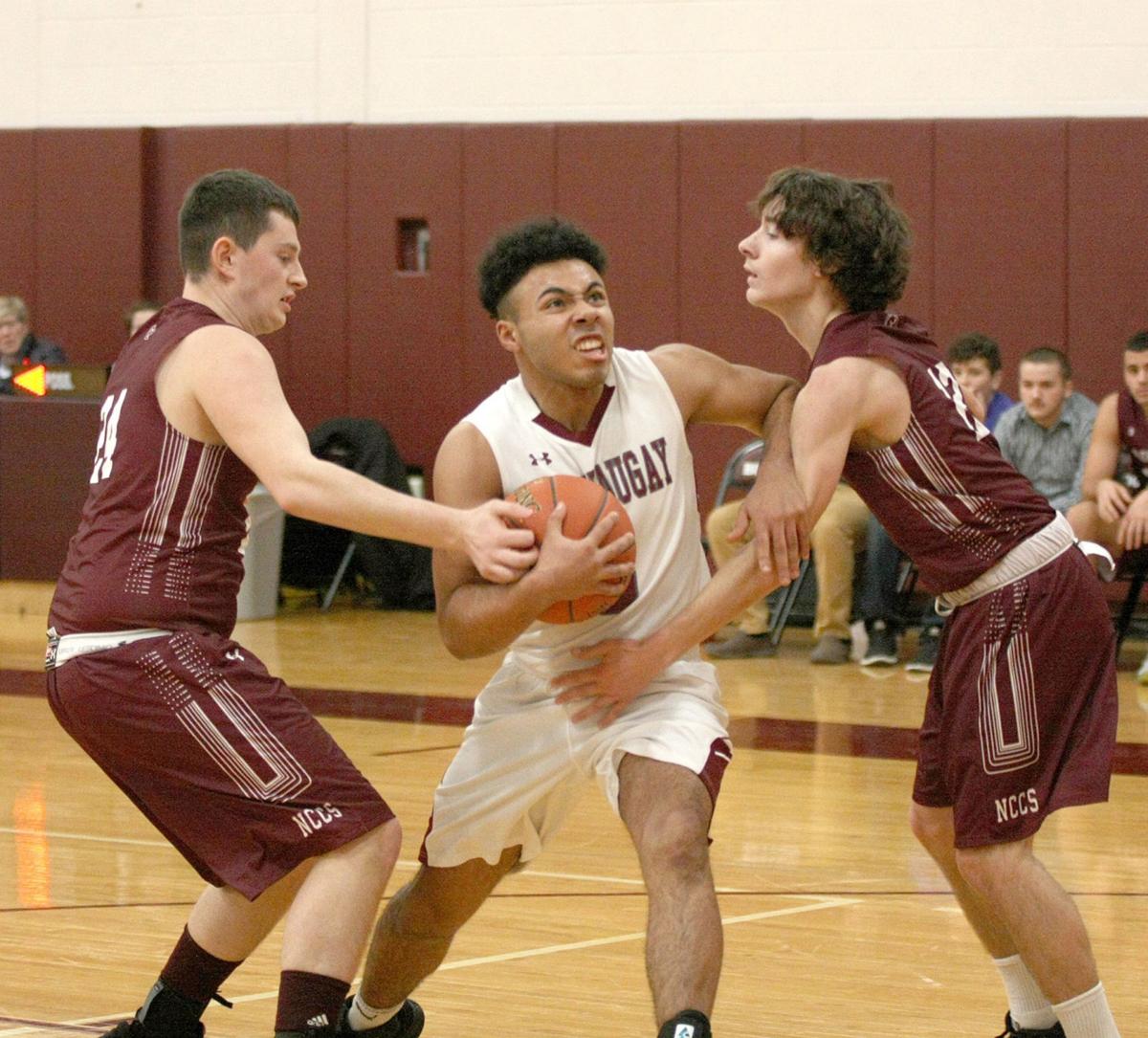 John Gokey, The TelegramChateaugay’s Silas Lewis gets grabbed and clawed by NCCS Cougars Spencer Trudo (left) and Mason Supernaw on his drive through the lane during the nonconference boys basketball game in Chateaugay on Monday. 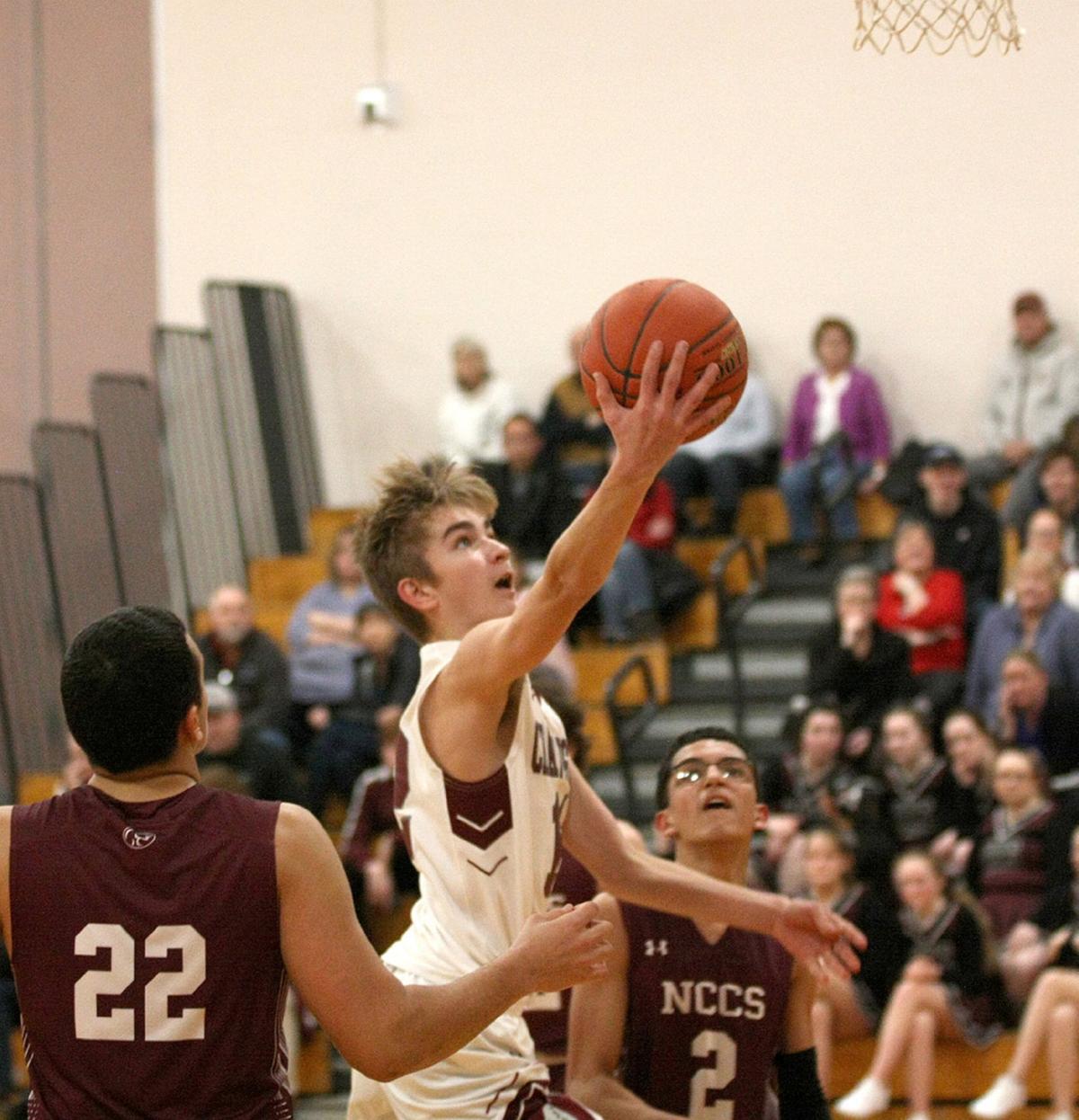 John Gokey, The TelegramChateaugay freshman Walker Martin slips in between the Northeastern Clinton defense of Stephen Garrow (22) and Bryan Claudio (2) and scores two of his 15 points during the second half of the nonleague game in Chateaugay on Monday.

John Gokey, The TelegramChateaugay’s Silas Lewis gets grabbed and clawed by NCCS Cougars Spencer Trudo (left) and Mason Supernaw on his drive through the lane during the nonconference boys basketball game in Chateaugay on Monday.

John Gokey, The TelegramChateaugay freshman Walker Martin slips in between the Northeastern Clinton defense of Stephen Garrow (22) and Bryan Claudio (2) and scores two of his 15 points during the second half of the nonleague game in Chateaugay on Monday.

CHATEAUGAY – There comes a point in each team’s schedule where a game crops up – despite the opposition’s record – and winds up as a wake-up call.

Such was the case for the Chateaugay boys varsity basketball team on Monday, as the Bulldogs continued their unbeaten season with a hard-fought, 54-38 nonconference victory against the visiting Northeastern Clinton Cougars (4-7).

“We really had to grind this one out,” stated Chateaugay coach Mike Martin. “Northeastern made it hard for us to get to the rim and we were ice cold from the outside.

“Sometimes you have to win ugly, and that’s what we did tonight,” said the CCS coach.

The Bulldogs struggled on their drives to the bucket, were off the mark (for them) from the outside and had to work hard for every point they scored, but still managed to improve to 10-0 on the season with the 16-point victory.

The Cougars made it tough all over the court for the Bulldogs, held their own on the boards against an aggressive-rebounding CCS squad, made it a struggle just to get the ball over the mid-court stripe and contested nearly every shot that CCS put up. The biggest factor that hurt NCCS in its upset bid was the Cougars’ own inability to score.

After both teams had multiple empty trips up the court, Chateaugay finally put the game’s first points on the board – a 3-pointer by Jonah McDonald – with 5:49 left in the opening quarter. The Bulldogs seemingly found their scoring touch the remainder of the stanza and led 13-4 after the opening eight minutes of play.

But, the shooting woes continued for Chateaugay, thanks, in part, to the NCCS defense, as the Cougars closed the gap to six points, 16-10, with six minutes left in the first half. After a triple by Walker Martin put Chateaugay back in front by nine, the Bulldogs went on a 12-2 run to close out the half for a 32-15 halftime lead.

Northeastern Clinton came out of the break and quickly cut into the Chateaugay lead, trimming its deficit back down to six points, 36-30 with just under two minutes left in the third. Chateaugay regrouped and close out the stanza with a quick six-point burst on back-to-back treys by McDonald and led 46-34 entering the final eight minutes of play.

The Bulldogs scored only eight points during the final quarter, but limited the Cougars to just four points as CCS held on for the win.

Despite struggling from the field, McDonald still managed to connect for a game-high 29 points, tossing in seven of the team’s 11 three-point baskets – an off night as far as the Bulldogs were concerned.

“Logan and Chase had nice games tonight and they did a lot of the little things that we need to get wins of this nature. Walker had a nice game and had some big baskets in the third quarter,” recalled the CCS coach. “I am proud of how we dug down in the fourth quarter.

“We will take this and build on it,” added the elder Martin.

Chateaugay is right back on the court for a 7:15 p.m. start today, hosting NAC East Division foe Parishville-Hopkinton.

In the only other boys basketball game on Monday, Franklin Academy defeated host Gouverneur 71-48 in an NAC Central Division contest.

The Huskies also had their own scoring issues in the opening stanza and trailed 11-9 after the first eight minutes of play. But, unlike Chateaugay, the FA boys found their offensive touch rather quickly and tossed in 22 points during the second quarter and led 31-21 at the half. The Huskies (8-3 overall) increased their lead by three points after three quarters of play and salted away their road win with a 24-point outburst during the final quarter to up their Central Division record to 6-1.

The loss leaves the Wildcats still searching for their first divisional win of the season (0-6) and drop to 2-9 overall.

Aiden Decillis, Payton Poirier and Keegan Monette paced the Huskies offensively and all three finished in double figures. Decillis tossed in a game-high 16 points while Poirier and Monette both finished with 14.

Franklin Academy is right back in action at 7:15 p.m. today, traveling to Central Division rival Salmon River for an NAC Central Division contest. Today’s Gouverneur game against St. Lawrence was postponed to Feb. 10.