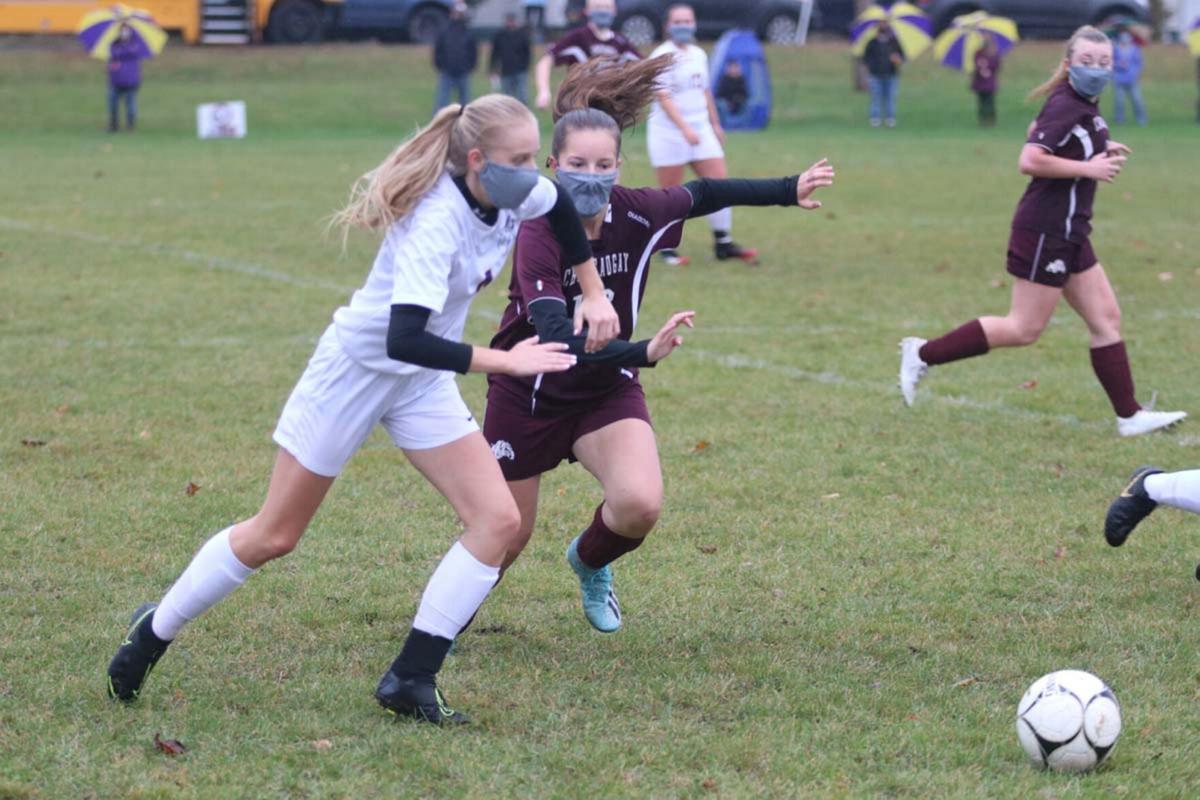 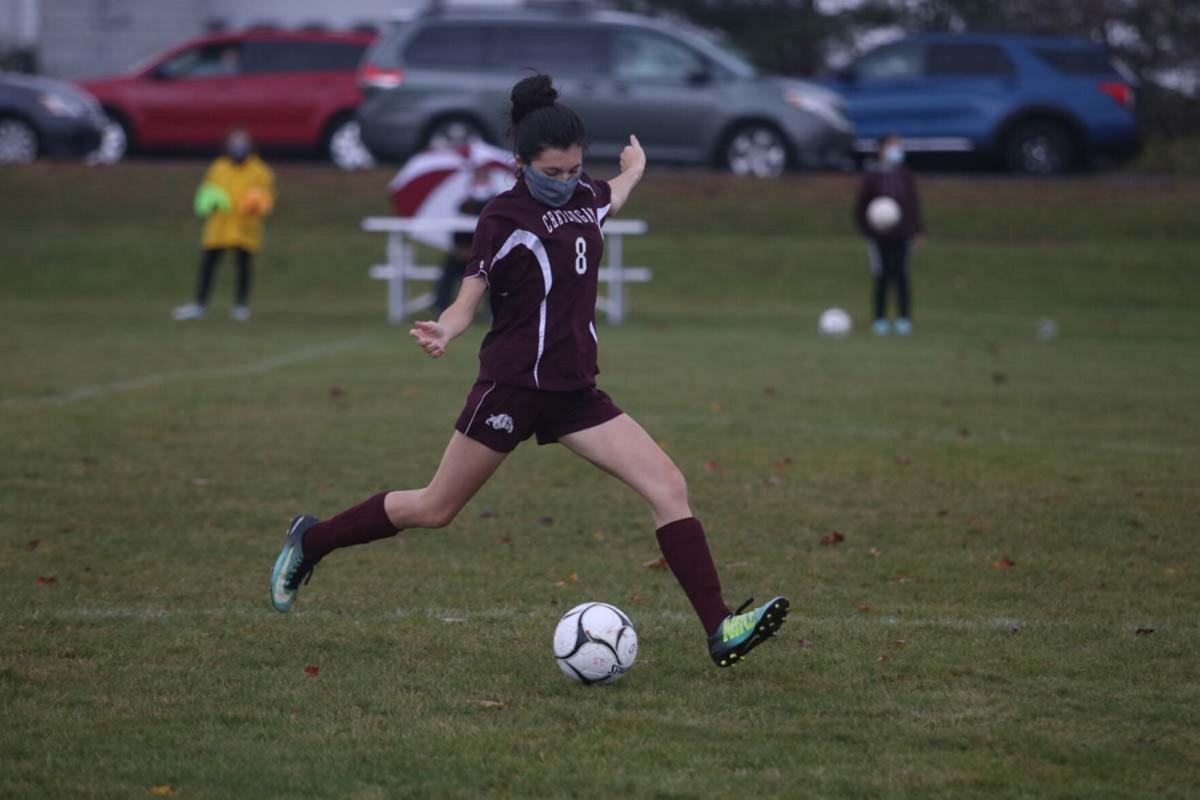 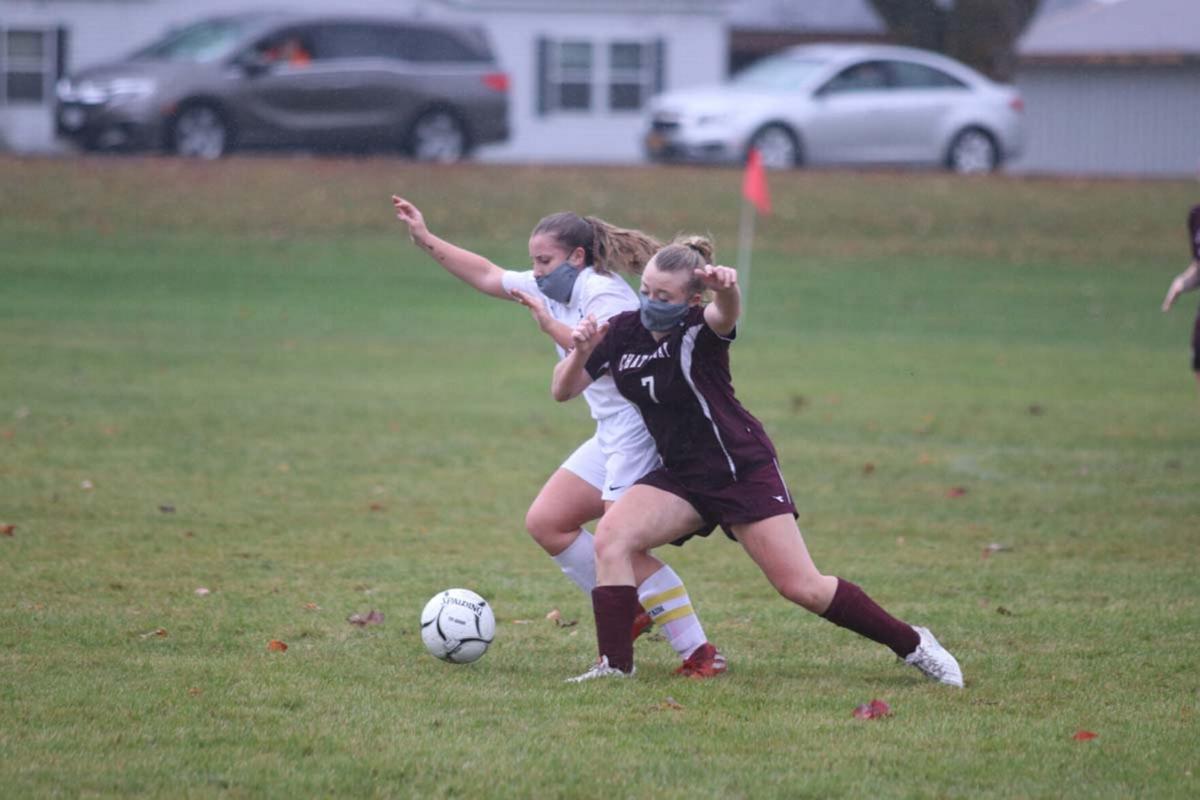 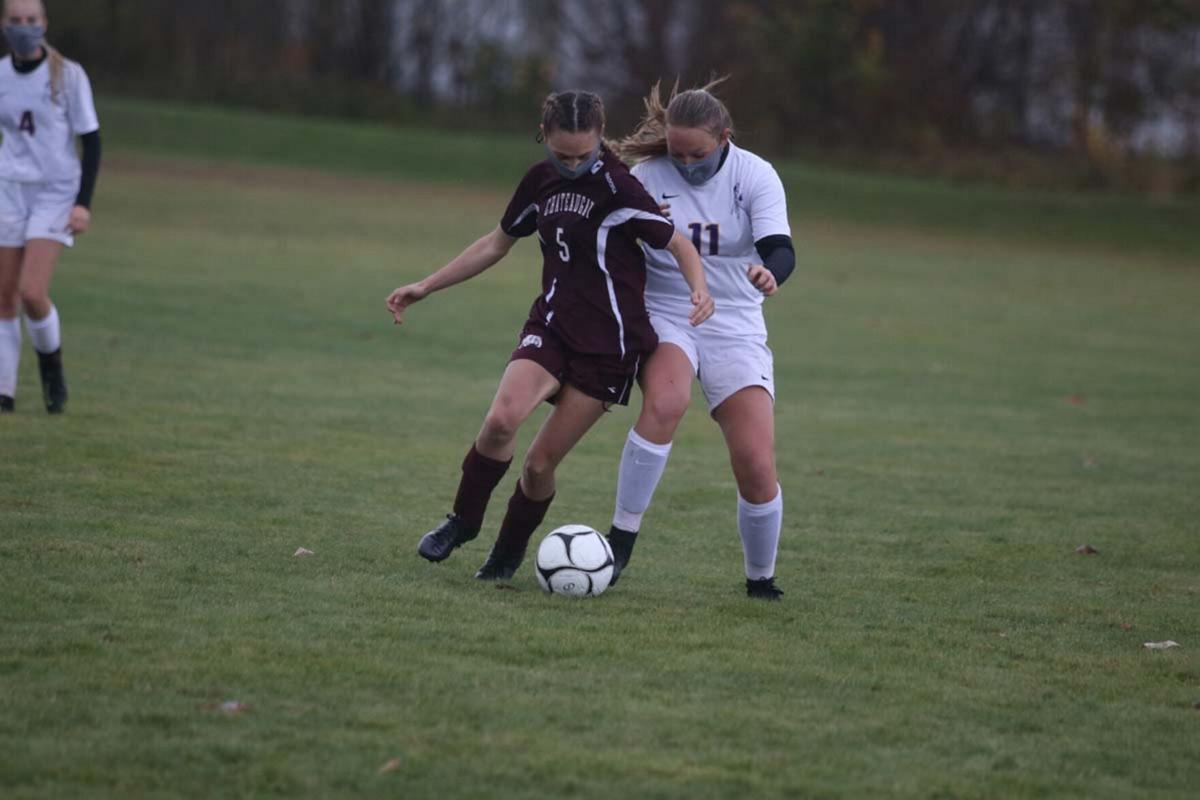 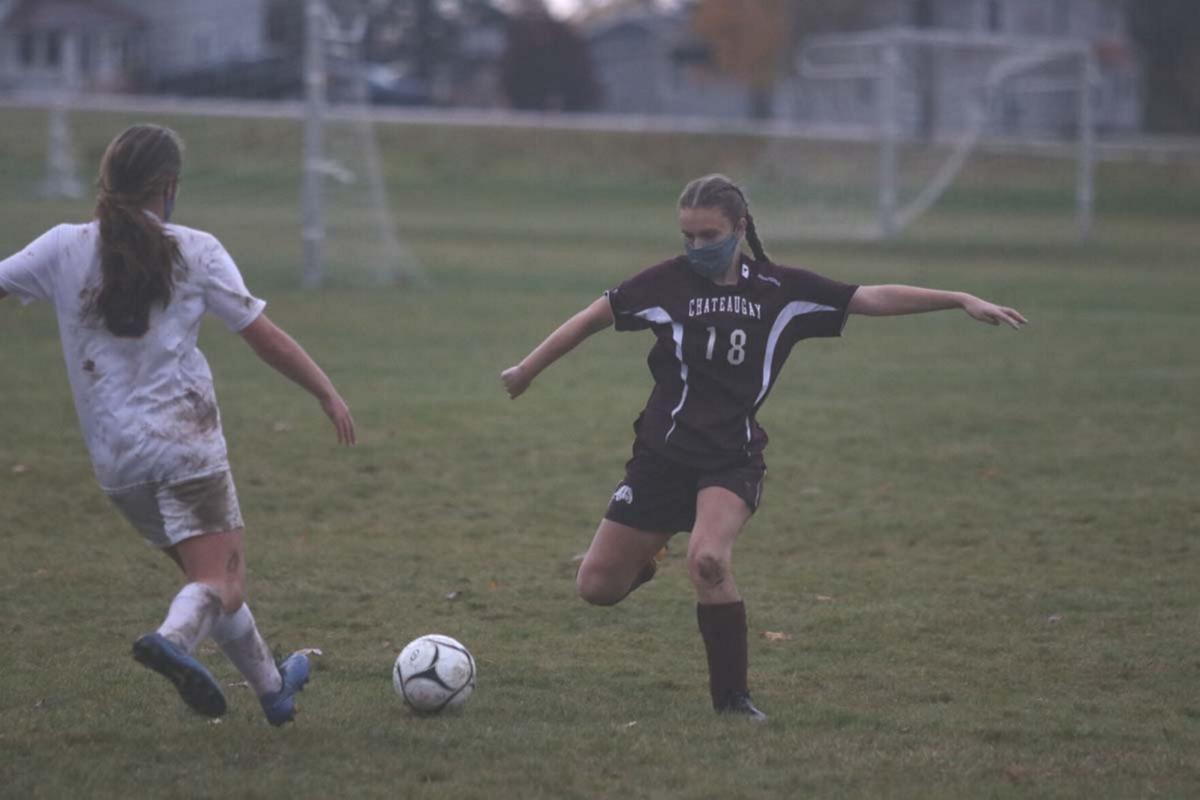 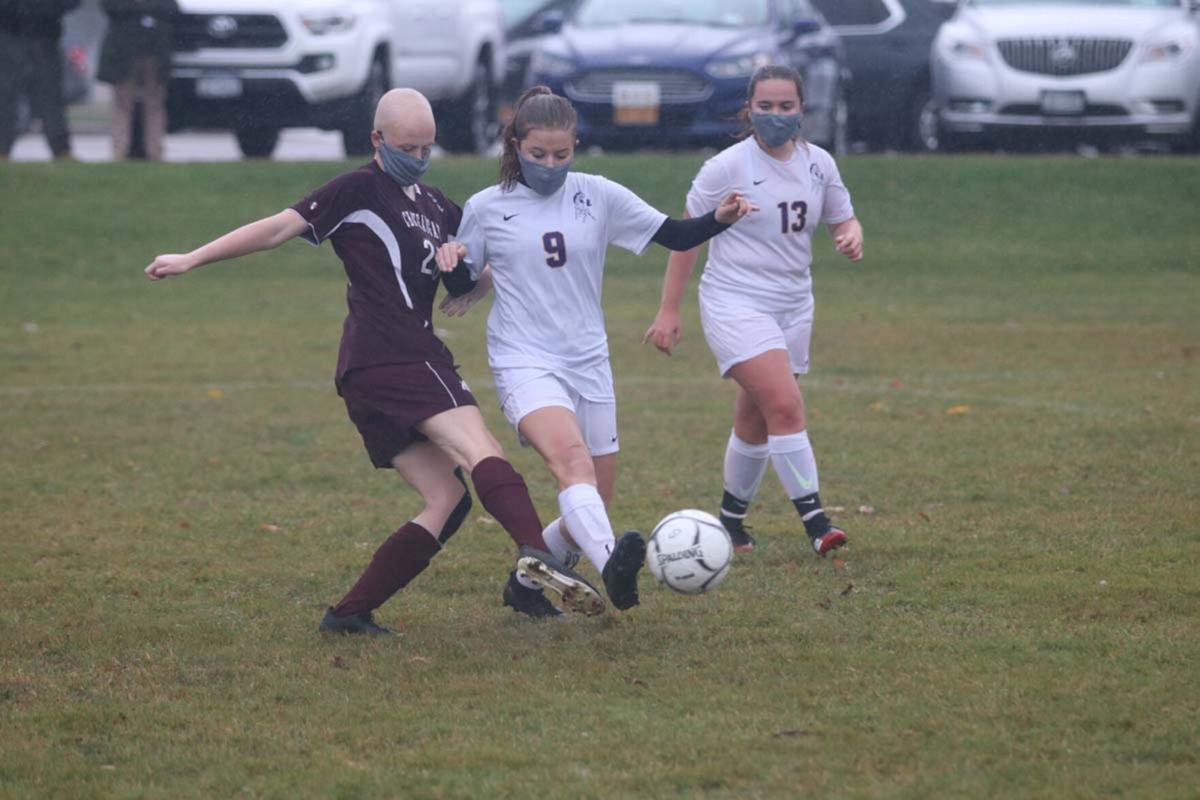 The Colts doubling up on Olivia Cook. Evan Wheaton/Malone Telegram 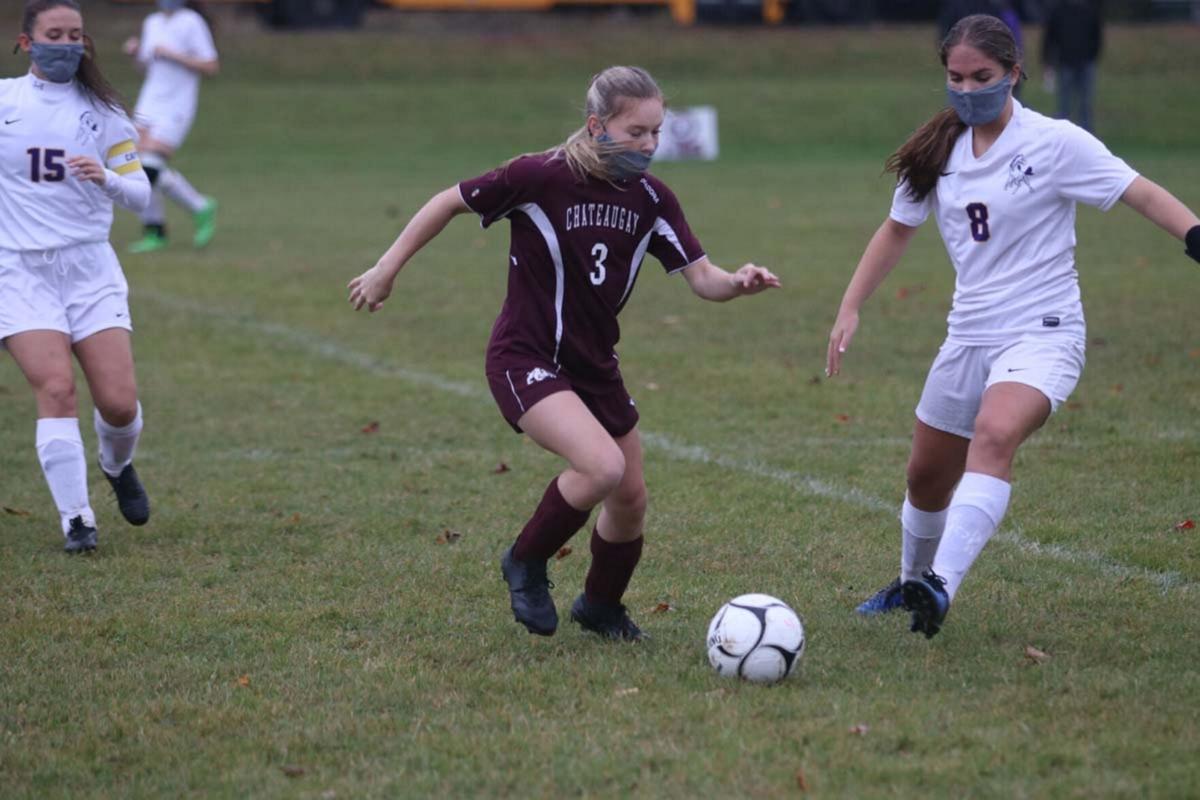 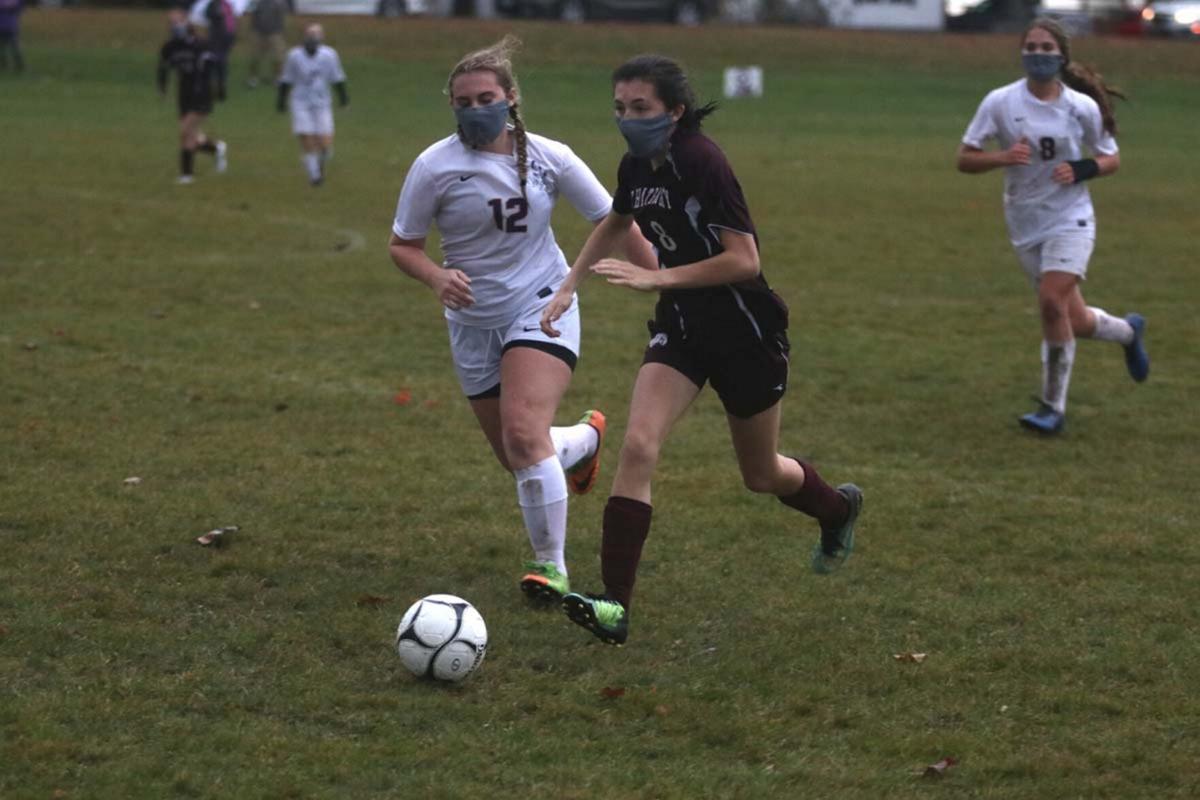 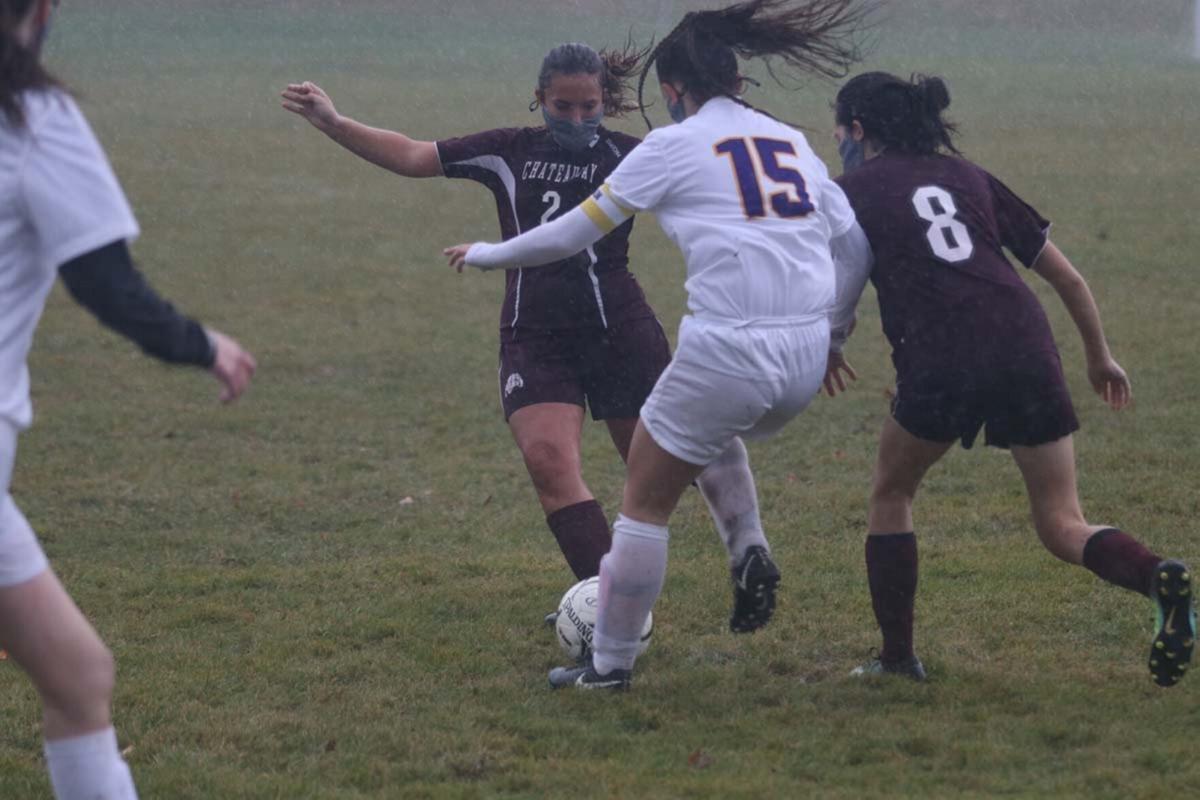 Jordyn Holbrook attempting to get a shot off. Evan Wheaton/Malone Telegram 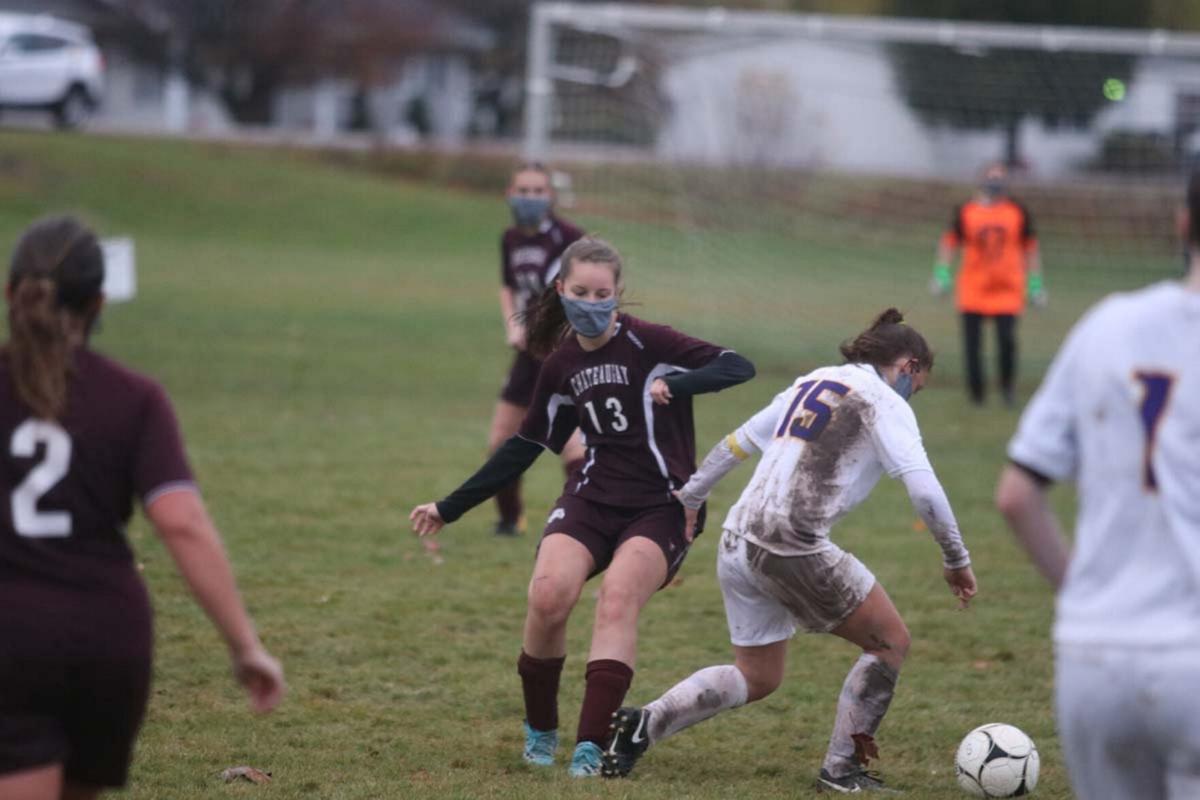 The loss was Chateaugay's first of the season. Evan Wheaton/Malone Telegram

The Colts doubling up on Olivia Cook. Evan Wheaton/Malone Telegram

Jordyn Holbrook attempting to get a shot off. Evan Wheaton/Malone Telegram

The loss was Chateaugay's first of the season. Evan Wheaton/Malone Telegram

CHATEAUGAY – A pair of goals from Colton-Pierrepont’s Alexus Cuthbert 30 seconds apart from one another lifted the Colts over the Chateaugay girls soccer team in double overtime on Wednesday.

“Obviously disappointing to lose a heartbreaker like that in double overtime when you’re battling for first place, but not disappointed in how we played. We gave it everything we have.”

Colton-Pierrepont entered the league matchup against an undefeated Chateaugay team after the Colts suffered their first loss of the season. Both teams battled for control of the Northern Athletic Conference East Division.

After generating four goals during Tuesday’s win over St. Regis Falls, Olivia Cook kept her momentum going for Chateaugay’s offense. She had a plethora of breakaway opportunities and outworked the Colts back line a number of times.

“She put pressure on them,” LaPlante said on Cook’s performance. “She missed a couple and put on lots of pressure, and you can tell their defense sort of keyed on it.”

Colton-Pierrepont began doubling up on Cook in an effort to slow her down.

Good offensive looks for days for the @CCSBulldogs. Working up the middle and almost netted their first goal. Game still scoreless in the first. pic.twitter.com/RZcoM5TEas

The Bulldogs came out in the second half firing on all cylinders, despite narrowly missing their shots. Ali Johnston found separation in the box and had room to position herself for a shot at close range. The ball went just over the Colton-Pierrepont net, and the Colts began to respond.

Staples defended the net from a flurry of shots on goal in the second frame, and the Bulldogs back line saw more action.

“We had plenty of chances to put them in. That’s the game of soccer.”

The Bulldogs have a tight turnaround in games over the weekend. Chateaugay will host Brushton-Moira at 10 a.m. on Saturday before hitting the road to face Madrid-Waddington at 1 p.m. the following Sunday.

The game against the Yellowjackets was rescheduled, as dates and times continue to be hit and miss in the COVID-19 era.

“It’s an adjustment, but at this point, we’re just really appreciative that we’re playing. If we have to play four games in a row, we don’t care because we’re just happy the kids get to have some normalcy in their lives,” LaPlante said.

“You just have to do it, it is what it is this year and we’re never going to be upset we’re playing three, four in a row because we’re playing. And that’s the important part.”

The Brushton-Moira girls soccer game against Parishville-Hopkinton also reached double overtime, with the latter winning 1-0 after a goal from Kaitlyn Kirk with minutes left. Natalie Palmer made 12 saves for the Panthers.