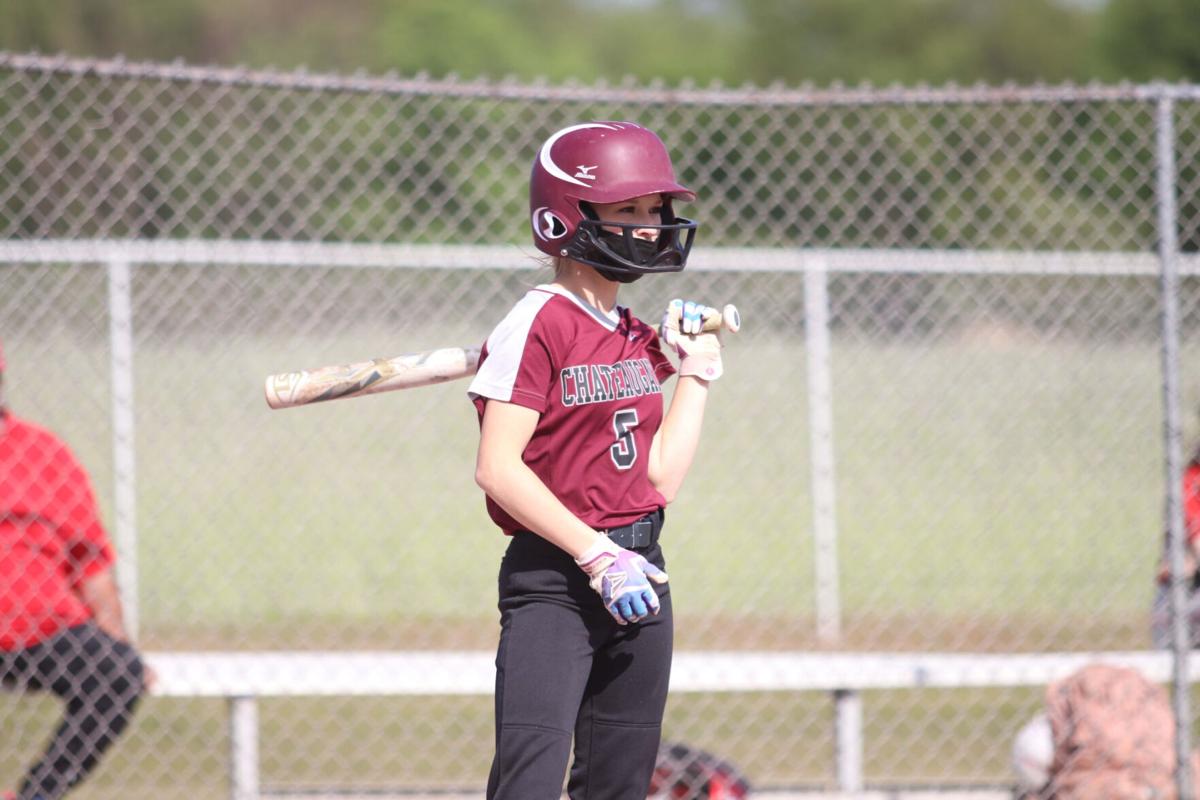 Chateaugay's Chloe Champagne steps up at bat. The senior shortstop scored a three-run home run to give the Bulldogs a 9-1 lead in the third inning. Evan Wheaton/Malone Telegram 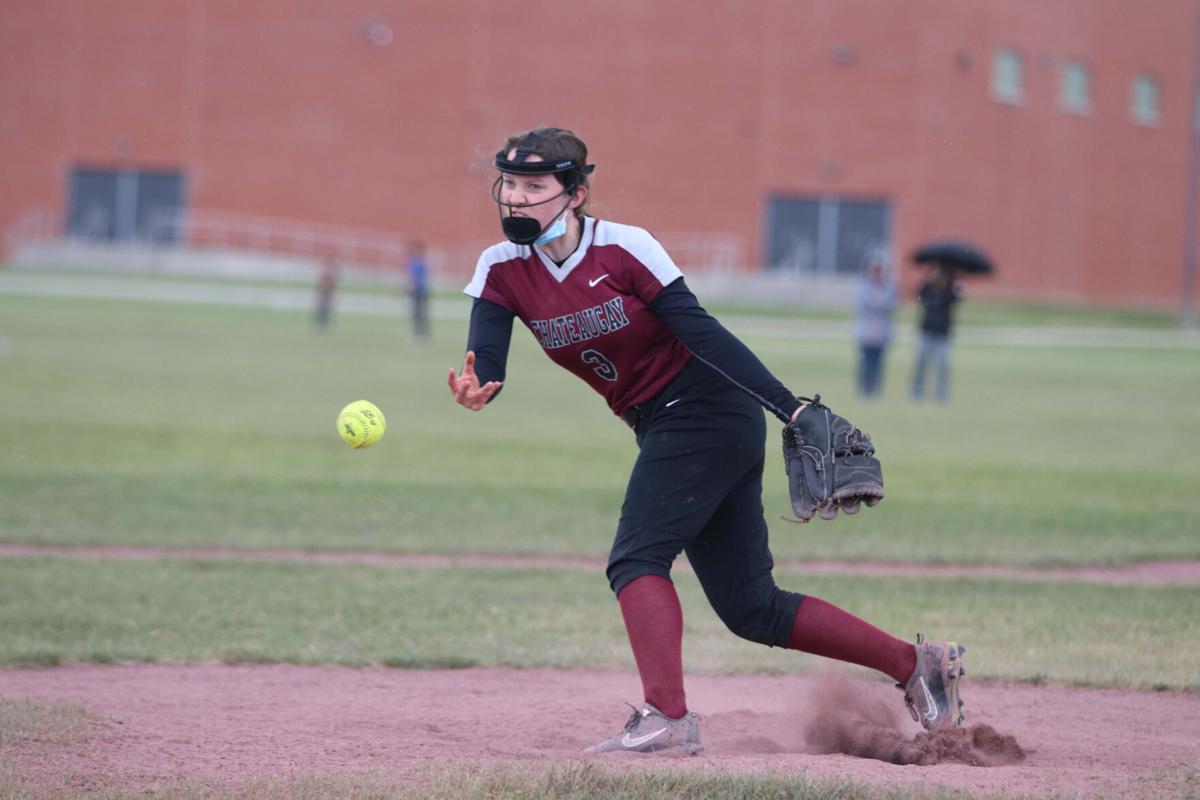 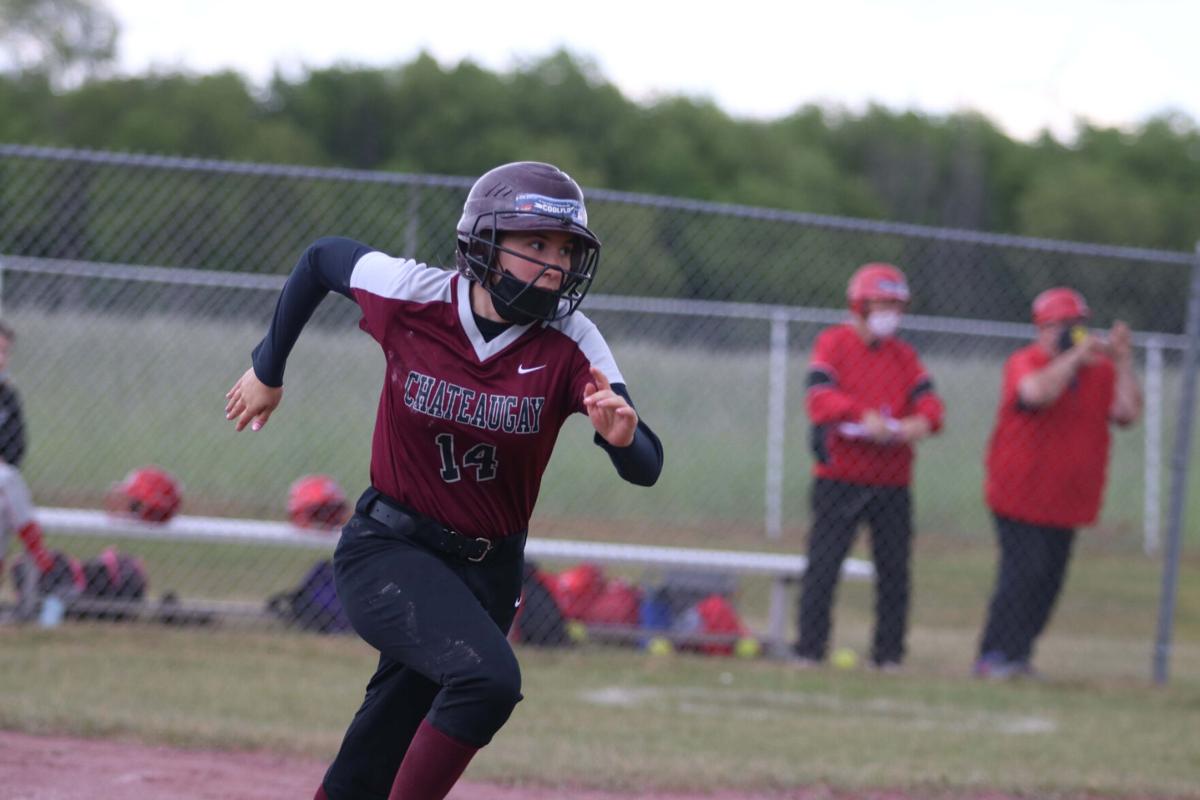 Chateaugay's Rachael Jarvis runs to first base after making a base hit. Evan Wheaton/Malone Telegram 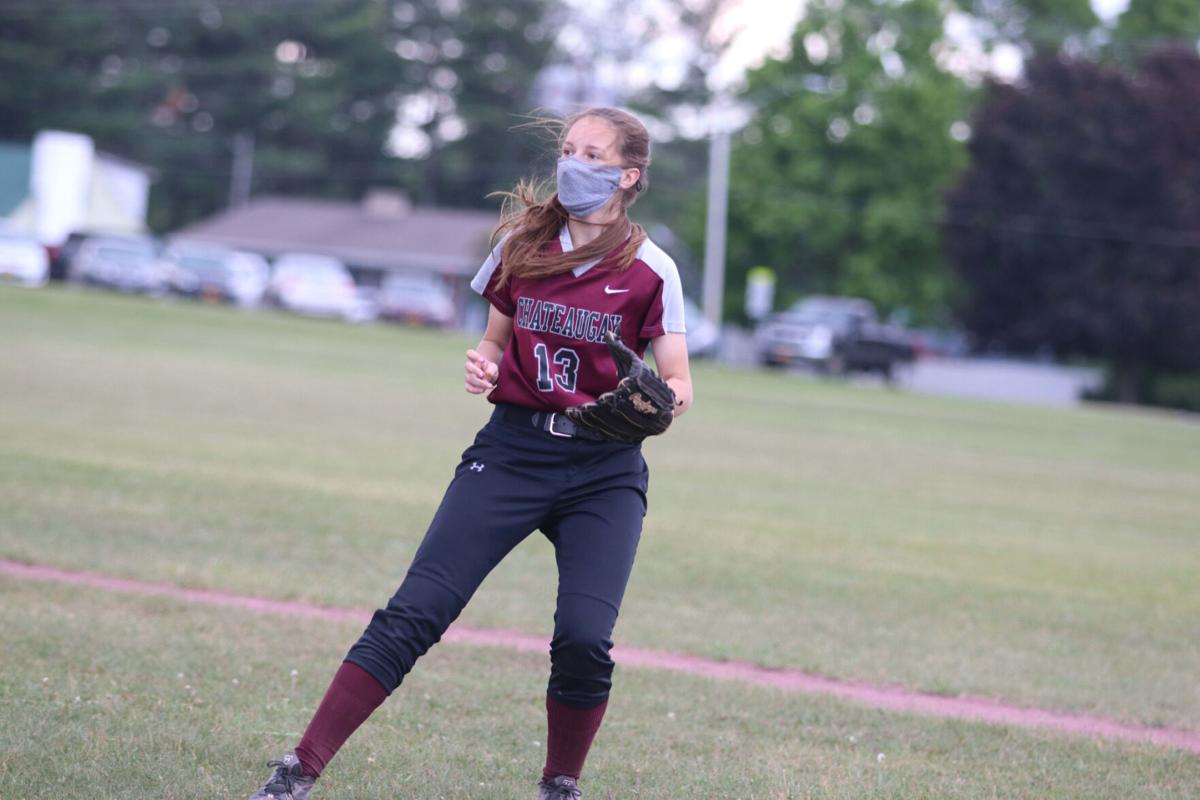 Chateaugay first baseman Cammi Champagne prepares to catch a ball off a teammate to make an out. the Bulldogs' field made three 1-2-3 innings. Evan Wheaton/Malone Telegram 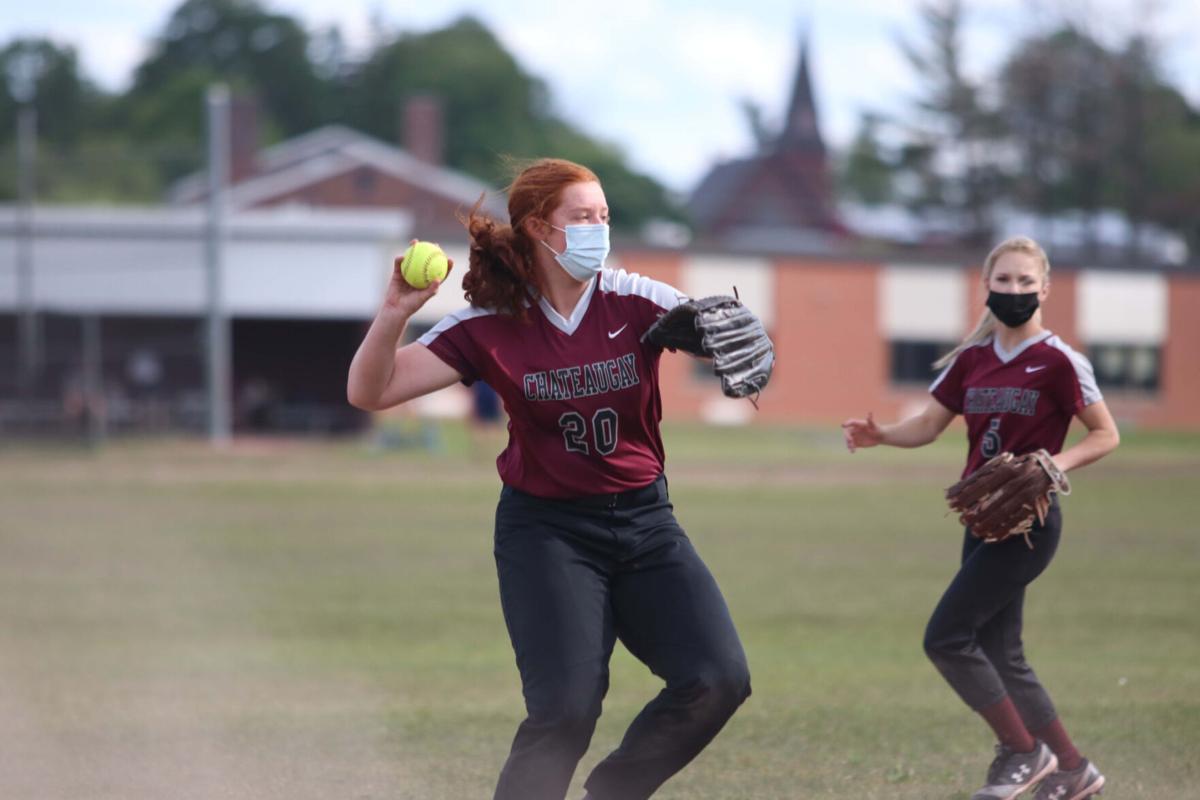 Chateaugay third baseman Kaelyn Morgan throws the ball to first base for an out. Evan Wheaton/Malone Telegram

Chateaugay's Chloe Champagne steps up at bat. The senior shortstop scored a three-run home run to give the Bulldogs a 9-1 lead in the third inning. Evan Wheaton/Malone Telegram

Chateaugay's Rachael Jarvis runs to first base after making a base hit. Evan Wheaton/Malone Telegram

Chateaugay first baseman Cammi Champagne prepares to catch a ball off a teammate to make an out. the Bulldogs' field made three 1-2-3 innings. Evan Wheaton/Malone Telegram

Chateaugay third baseman Kaelyn Morgan throws the ball to first base for an out. Evan Wheaton/Malone Telegram

CHATEAUGAY – Chateaugay softball had no problem getting the hits. They kept coming through four innings, and the Bulldogs quickly loaded the bases in the bottom of the fifth.

Then, there was a change of pace.

With a commanding 12-1 lead over Parishville-Hopkinton, the Bulldogs took six consecutive walks, scoring four runs to cap off a 16-1 home win through five frames on Tuesday.

“Those kids went up and took some pitches, trying to make them throw strikes,” Chateaugay coach Jason LaPlante said of the late walks. “They took some pitches and they were patient, getting the right thing. Not trying to do too much.

“I’m really happy with the way we’re playing right now. We’ve won four in a row, we’re really getting where we want to be and improving every day. This was our most complete game I’d say.”

B5 | Back-to-back walks for Chateaugay while the bases are loaded. Bulldogs now lead 14-1, Coach Harper heads to the Parishville mound. pic.twitter.com/dNqeYrpGV3

Prior to the fifth inning – in which Natalie Snell relieved Cassidy Phippen on the Panthers’ mound – the Bulldogs (7-3) were awarded just one walk, and their batters were challenged at the plate to make contact.

LaPlante credited the consistent production at bat for Chateaugay with even more consistent pitching from Parishville-Hopkinton (2-8).

A little speed to steal bases and force mistakes in the field goes a long way as well.

“They throw strikes, and we just put the bat on the ball. We don’t strike out often,” LaPlante said. “(We) put the ball in play and we’re fast. That speed can cause defenses to panic a lot. They made some really nice plays today as well and our speed probably just made them go a little faster than they wanted to. It makes a difference.”

The Panthers’ lone run was the first of the game, and it came from senior outfielder Emma Bloom off a wild pitch. From there, Avery McDonald brought home Chloe Champagne with a base hit to tie it 1-1 in the bottom of the first.

Mid 1 | Emma Bloom in on a wild pitch to put the Panthers up 1-0. pic.twitter.com/VyxHEWw4ya

The Bulldogs piled on three more runs to close out the first frame with a 4-1 cushion. Alison Johnston doubled in Rebekah Miller and Champagne in the following inning to extend Chateaugay’s lead, 6-1.

Champagne drove in a three-run home run in the third inning to pull away further. The senior shortstop then made a diving catch for the third out in the top of the fourth, stranding a runner on third for the Panthers.

“We work on that. We have some strong fielders, they’re confident and they’re under control, they don’t panic and make some plays,” LaPlante said.

CHLOE CHAMPAGNE!Three-run home run for the senior. Chateaugay extends its lead, 9-1 in the bottom of the third. pic.twitter.com/HeNTQmXlcM

A Champagne double play and Kaelyn Morgan catch on a line drive by third base were some of the defensive highlights for a Bulldogs field that saw three 1-2-3 innings. The first two – in the second and third frames – mirrored one another with a strikeout thrown from McDonald in between plays to first base.

McDonald pitched all five innings, striking out six batters and walking three, while allowing just one hit – a double from Bloom on the first pitch of the game. After Victoria Titus tripled in Racheal Jarvis, Chateaugay found two more runs in the fourth before the walk-off.

As the regular season winds down, the Bulldogs face a tight turnaround with Tupper Lake on Wednesday as well as a rematch against Brushton-Moira on Friday. Chateaugay hopes to win out and take the no. 2 seed in the Section 10 tournament.

“If we can finish with those two strong, we can look at some home games here in the playoffs and see what we can do,” LaPlante said. “It’s been a good year so far. They started out sluggish. Now we really turned it on here, so we’ll continue to roll come Section 10. This is when you want to be playing your best.”