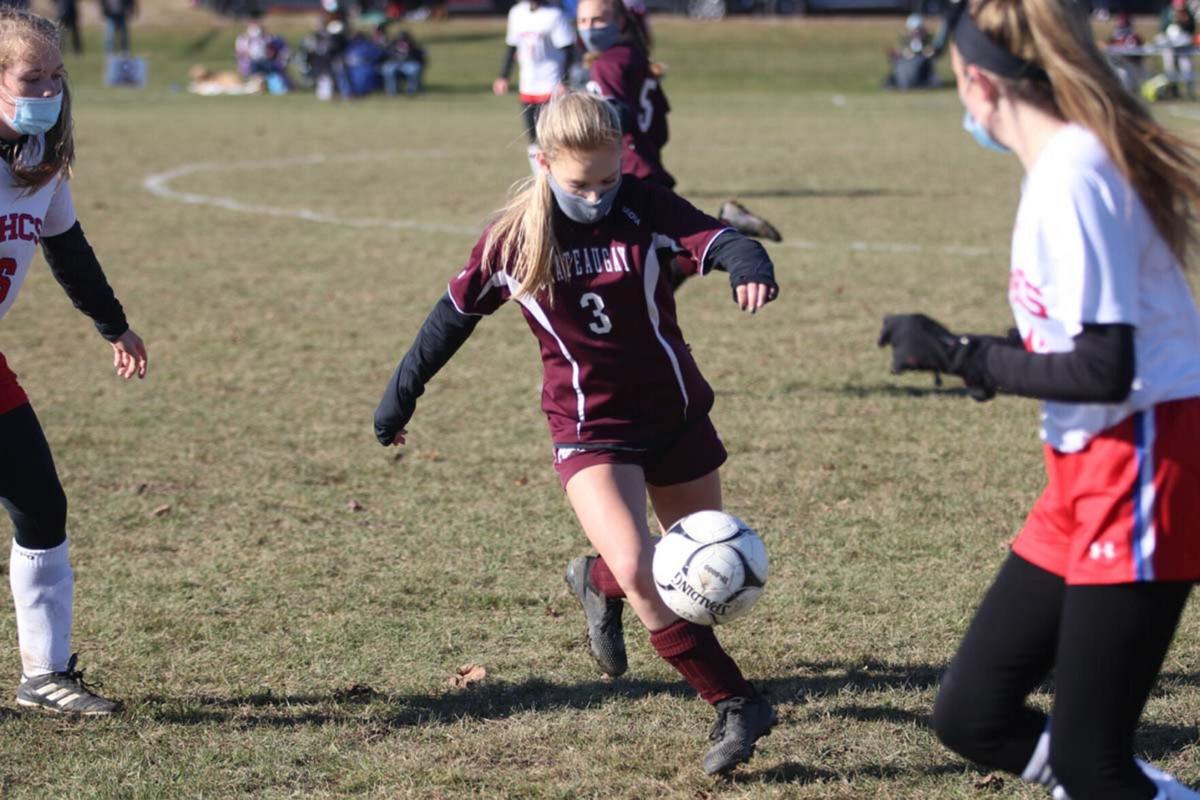 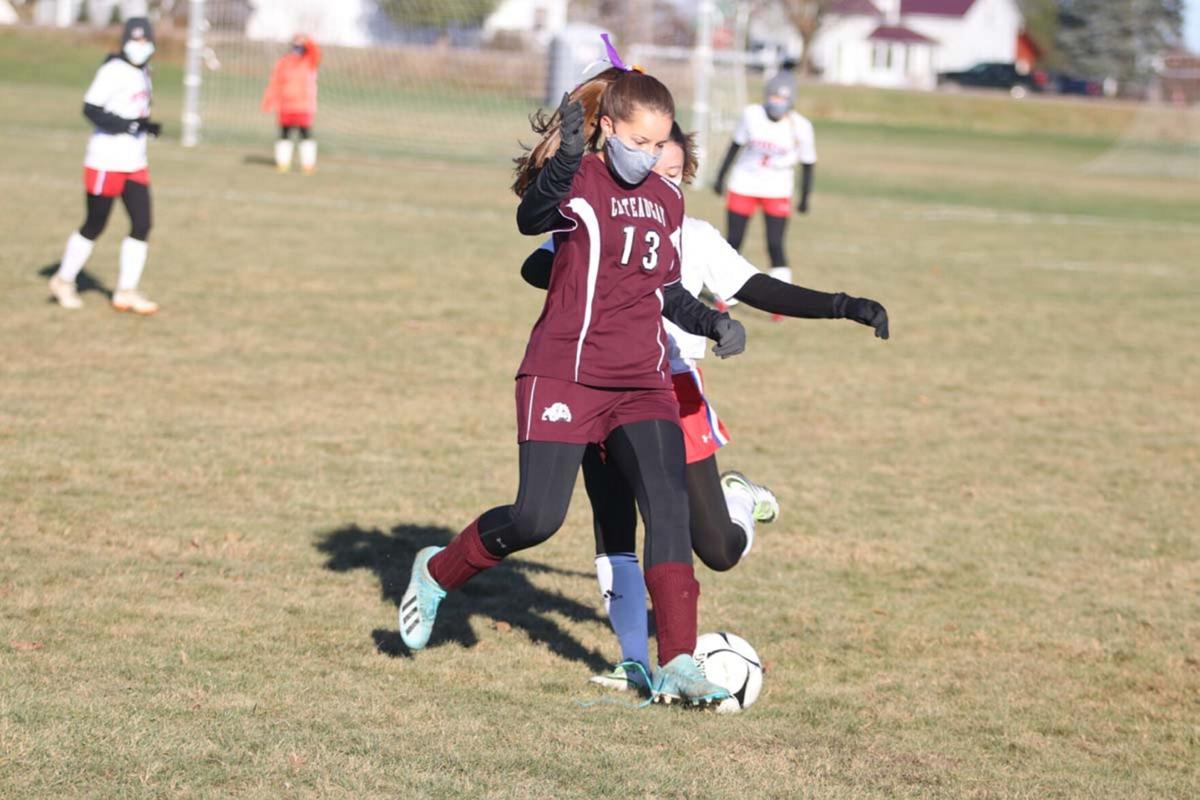 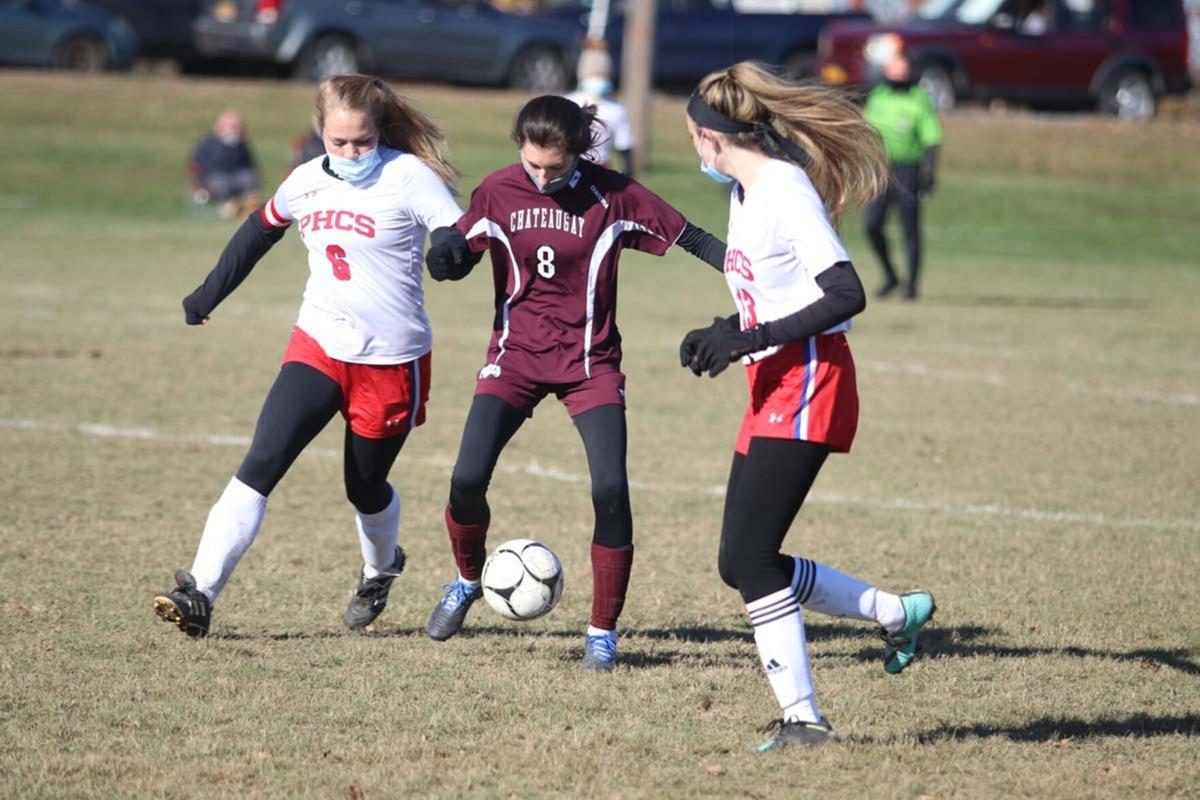 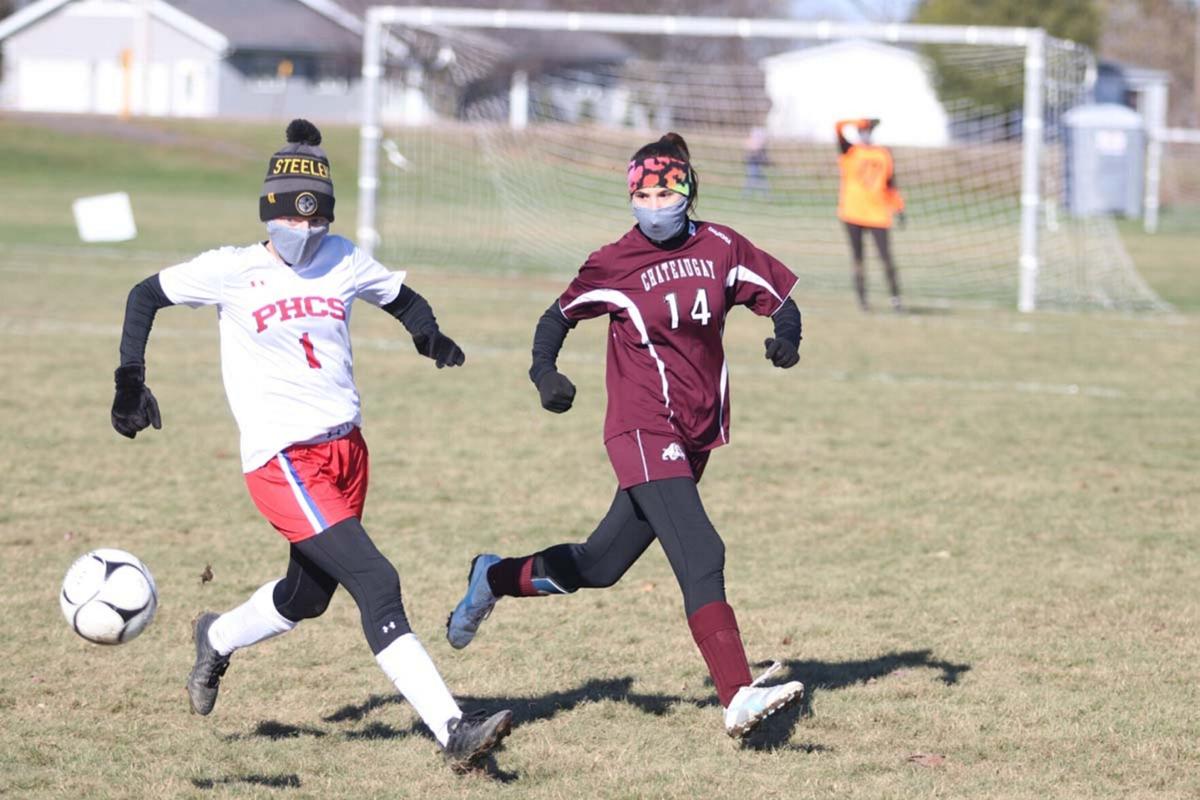 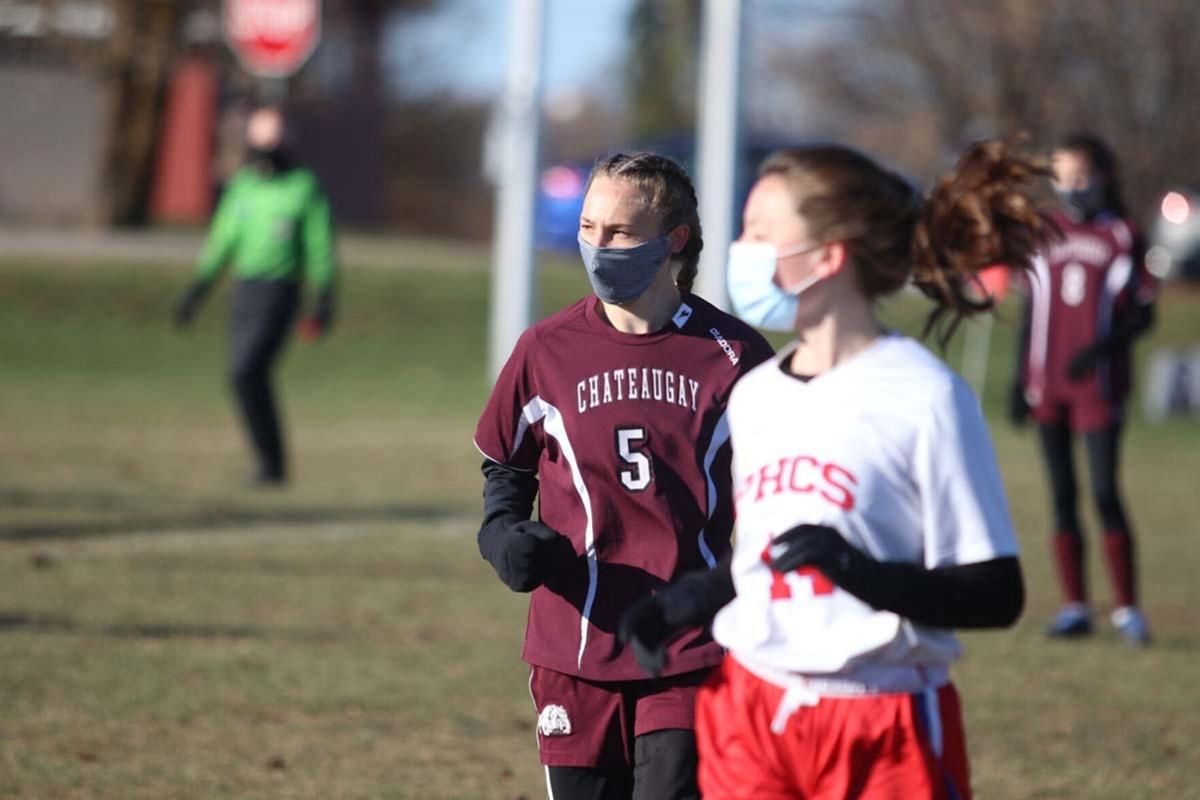 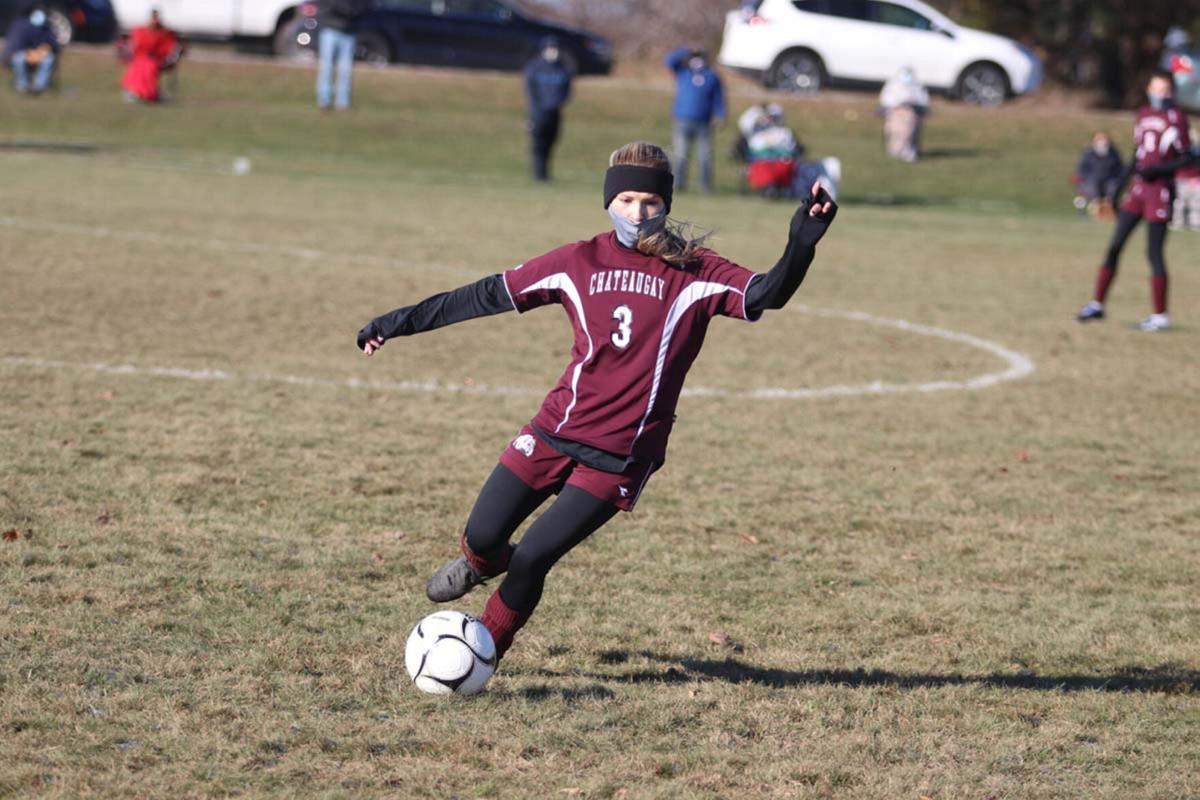 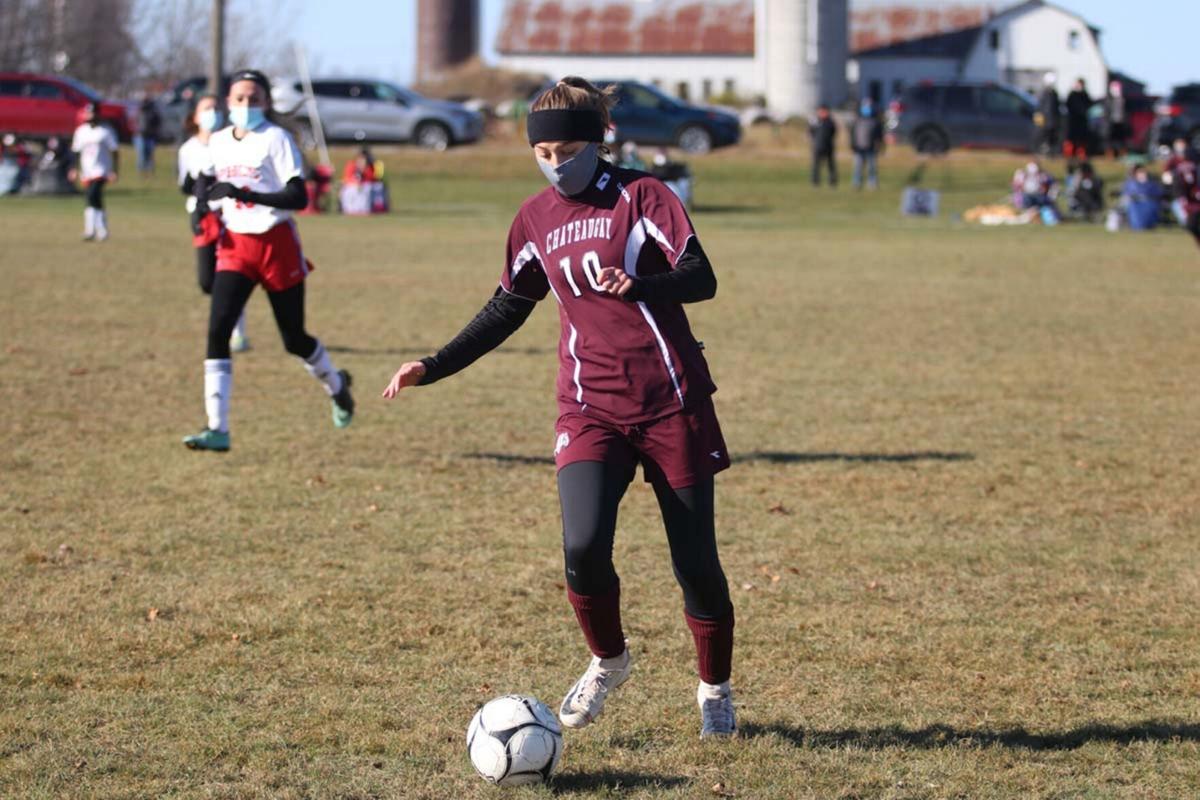 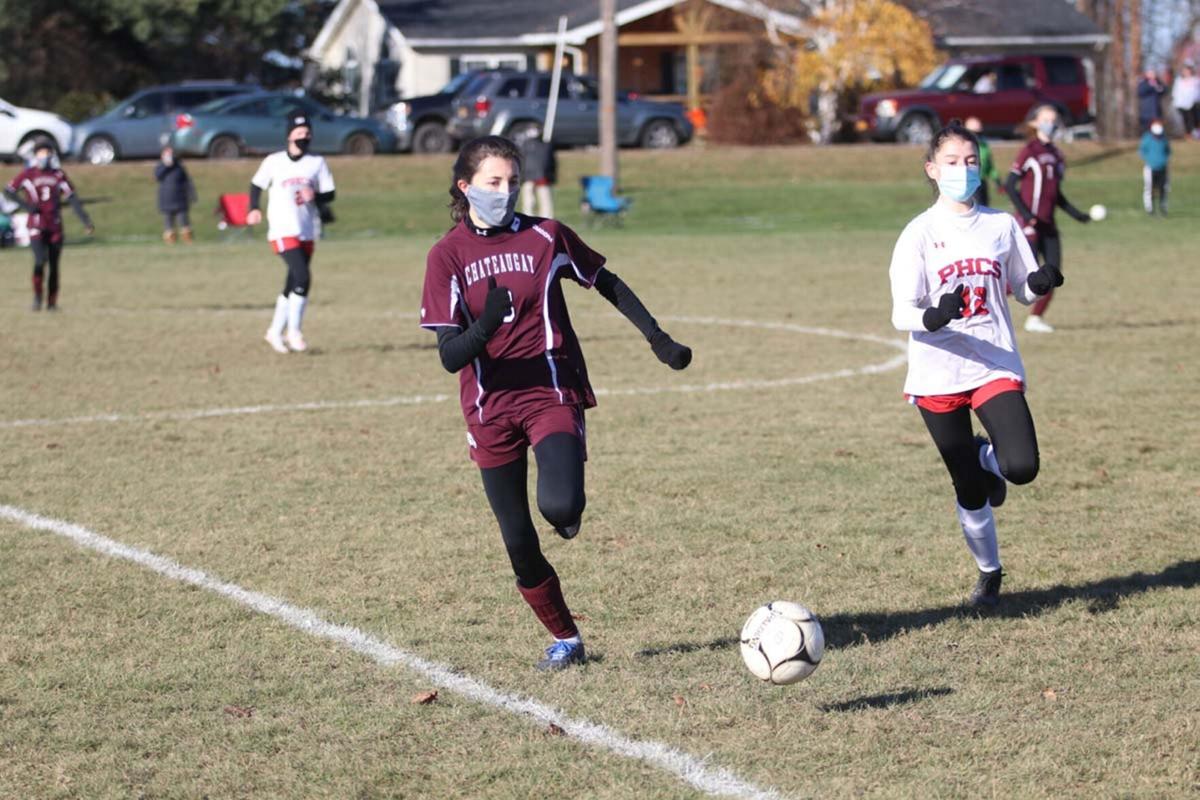 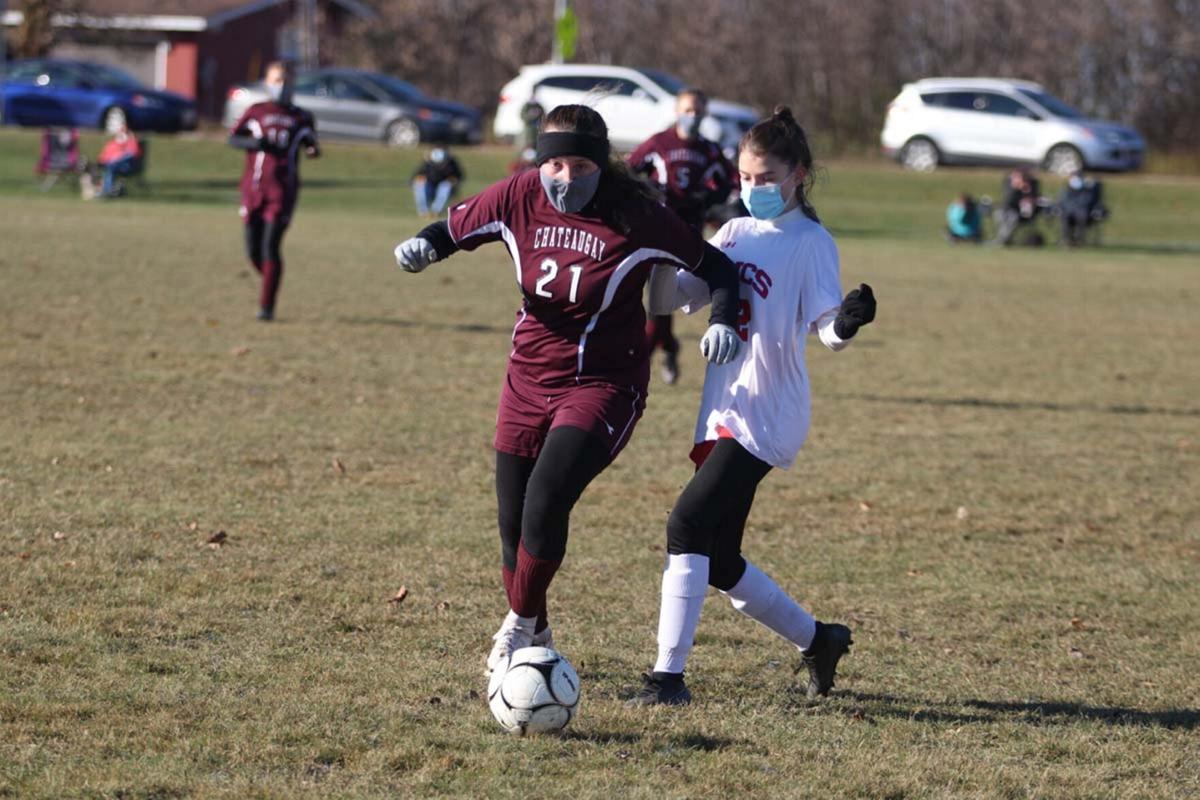 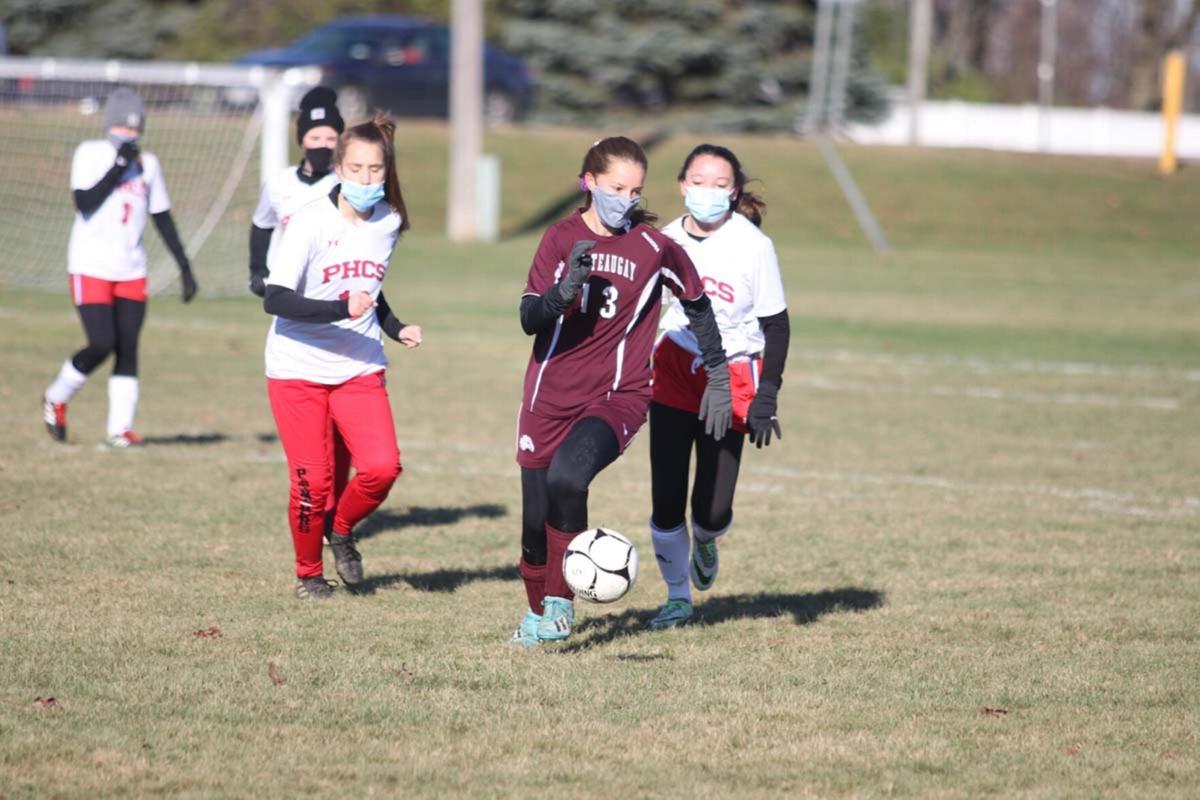 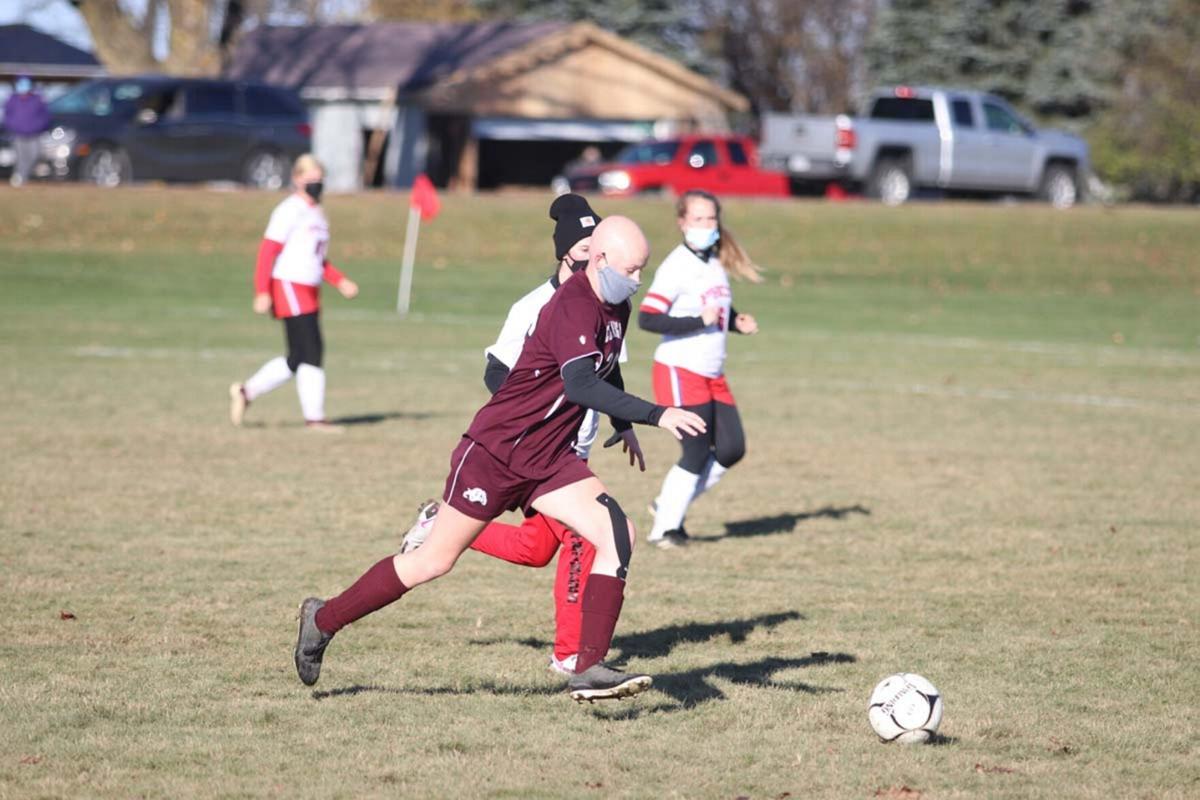 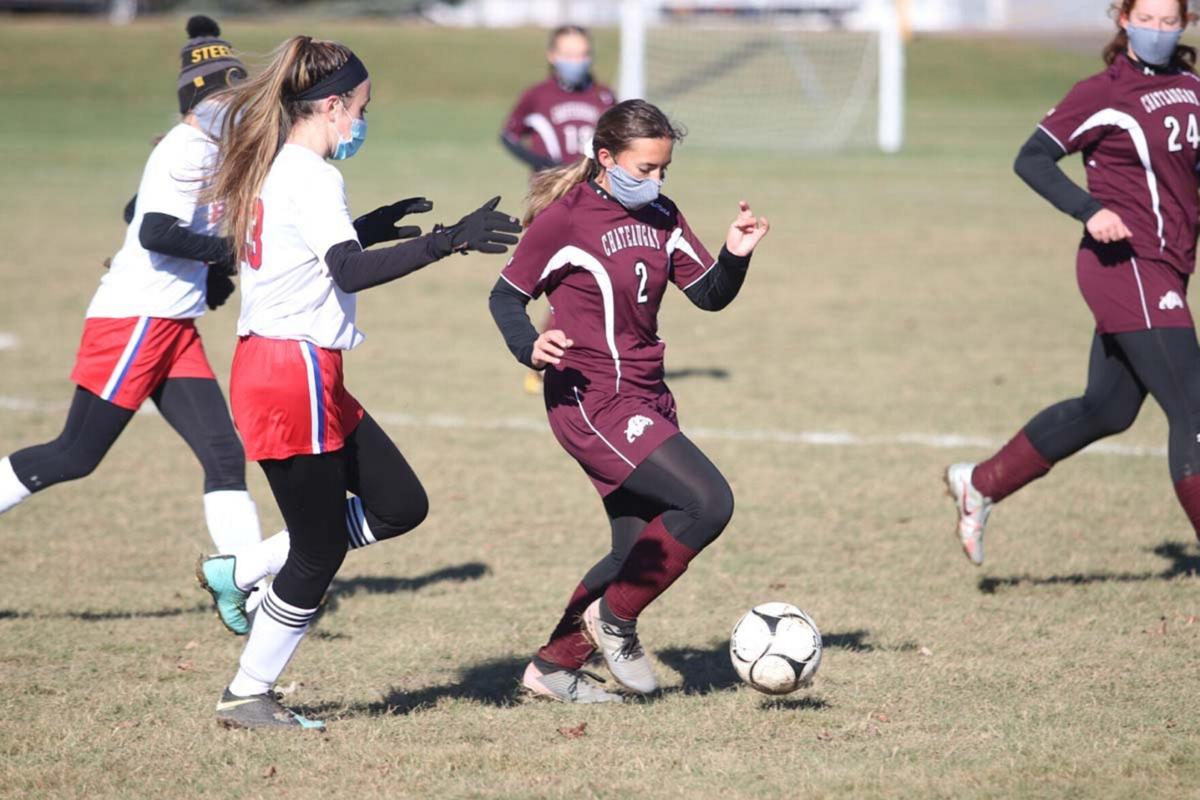 Both offenses had great looks in the first half, though the first goal wasn’t scored until the 39th minute. Evan Wheaton/Malone Telegram 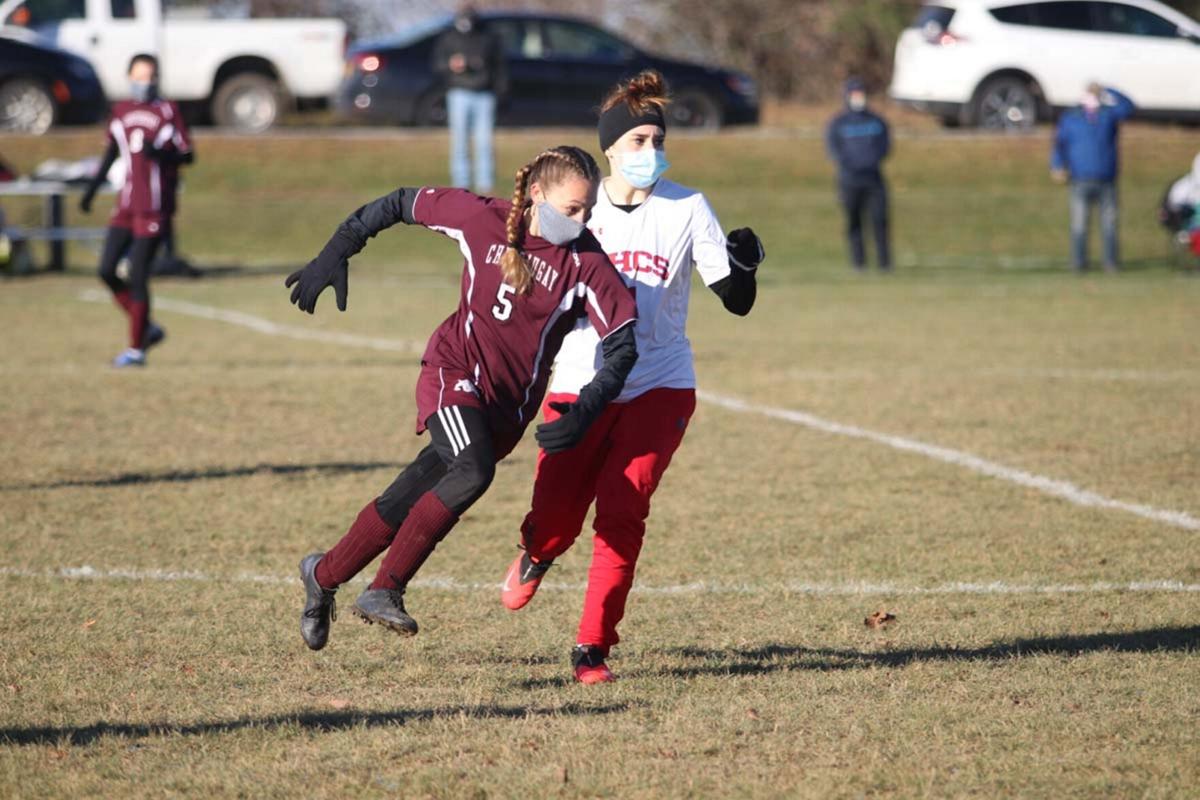 Both offenses had great looks in the first half, though the first goal wasn’t scored until the 39th minute. Evan Wheaton/Malone Telegram

CHATEAUGAY – If there was any fatigue after the tight turnaround from Tupper Lake, the Chateaugay girls soccer team didn’t show it in a 4-0 statement win against Parishville-Hopkinton on Saturday.

The Panthers and Bulldogs entered the league matchup vying for control of the Northern Athletic Conference East Division, and the latter had an offensive explosion in the second half with three goals between Chloe Champagne and Olivia Cook.

“We work really hard together, we trust each other,” Champagne said on her chemistry with Cook. “We just have a connection.”

Four minutes after the break, Kylee Peterson fed Champagne a pass toward the left post, who then curved the ball into the net.

Champaign kept attacking the post, and Cook set up her next goal from outside the box during the 63rd minute.

Cook found the net herself off a pass from Champagne with just 16 seconds left on the clock.

“We got the ball up there, and once we get it, we just go,” Champagne said. “We’re faster than everyone else pretty much. We just dominate up there.”

Chateaugay coach Jason LaPlante added, “Chloe (Champagne) and Liv (Cook), they just put it on people up there. They’re a scary duo.”

The first half wasn’t too far a contrast for the Bulldogs.

With just one minute and 45 seconds remaining in the first half, Alison Johnston broke the stalemate between two offenses that were getting plenty of great looks between them.

Johnston found separation in the box after receiving a pass from Cook, and she poked it through the legs of Parishville-Hopkinton goalkeeper Kelsey Farmsworth (11 saves).

“Once we saw that goal, I thought, ‘We’re going to fly now,’” LaPlante said.

Even on several drives that didn’t result in a goal, the Bulldogs found great opportunities in different ways. Peterson was a threat in the box with crossover moves, while Avery Tam had swings on the right wing where the Panthers’ back line struggled to contain her.

Emma Staples made eight saves in net for Chateaugay.

The Bulldogs will have a break on Sunday before hosting St. Lawrence, and are in a position to close out the NAC East as the end of the season draws near. But with schools like Gouverneur and Harrisville switching to remote learning after positive COVID-19 tests, there remains uncertainty for the immediate future.

“We have four games left. We just hope we can get all four of them in,” LaPlante said. “They (Parishville-Hopkinton) have two losses now and Colton has two losses, and we have one, so we control our destiny right now. We keep playing like this and win out the division title, that’s our goal. That’s all we can do.

“We sure hope we can get all four games in, because this team deserves it.”

“Seven goals against really stings when you are on a run of good play,” Chateaguay boys soccer coach Ted Martin said. “Our transition game was in the toilet. Turnovers at midfield against an offensive powerhouse like Parishville are deadly. Kudos to the kids for continuing to play hard while staring defeat in the eyes.”

Brushton-Moira girls soccer shutout Madrid-Waddington, 1-0. Emma Russell sent a pass on the right wing to Kyla Phelan, who punched it into the left side of the net in the 46th minute.

“I was very happy with how we responded to getting beat for much of the first half,” Brushton-Moira girls soccer coach Bryan Phelan said. “The defense pushed up and I was very impressed with the distribution from the back line. Lauren Schack and Megan Ashley had great speed on defense and were able to recover on anything over their head.”

The Yellowjackets started strong by controlling the ball and gaining first touches throughout the first frame. The Panthers carried momentum into the second half by gaining more possessions, most of which took place in Madrid-Waddington’s defensive third.

“Alyssa Poirier reacted well to the ball and was able to put the ball back in to our middies and forwards, and Bailey Traynor did an excellent job winning balls and distributing from the defense forward,” Phelan said. “Natalie Palmer (four saves) was aggressive in goal and helped clear any long attacks they attempted with our back line pushed up high.”

St. Regis Falls girls soccer picked up its first win over Tupper Lake, 1-0 behind a goal from Kendra Richardson with 29:42 remaining in the second half.

Brushton-Moira’s dual meet with Gouvernuer was cancelled after the latter switched to remote learning.