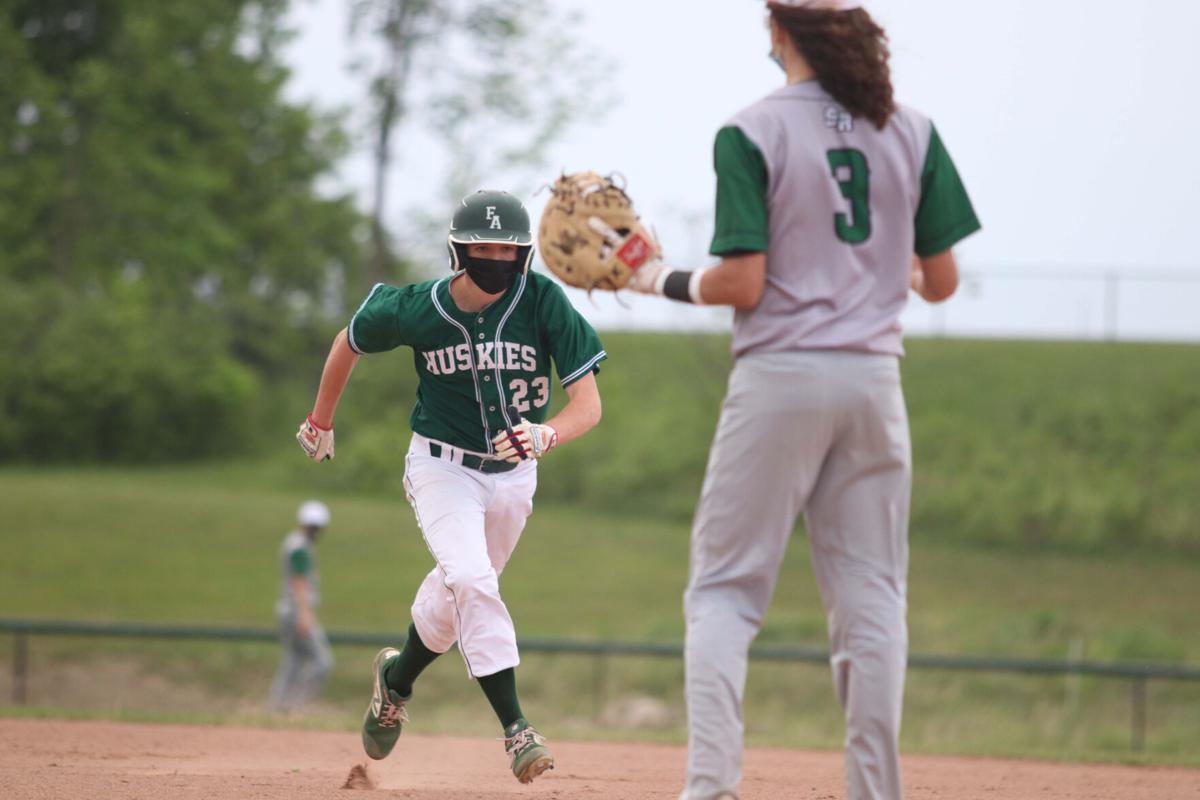 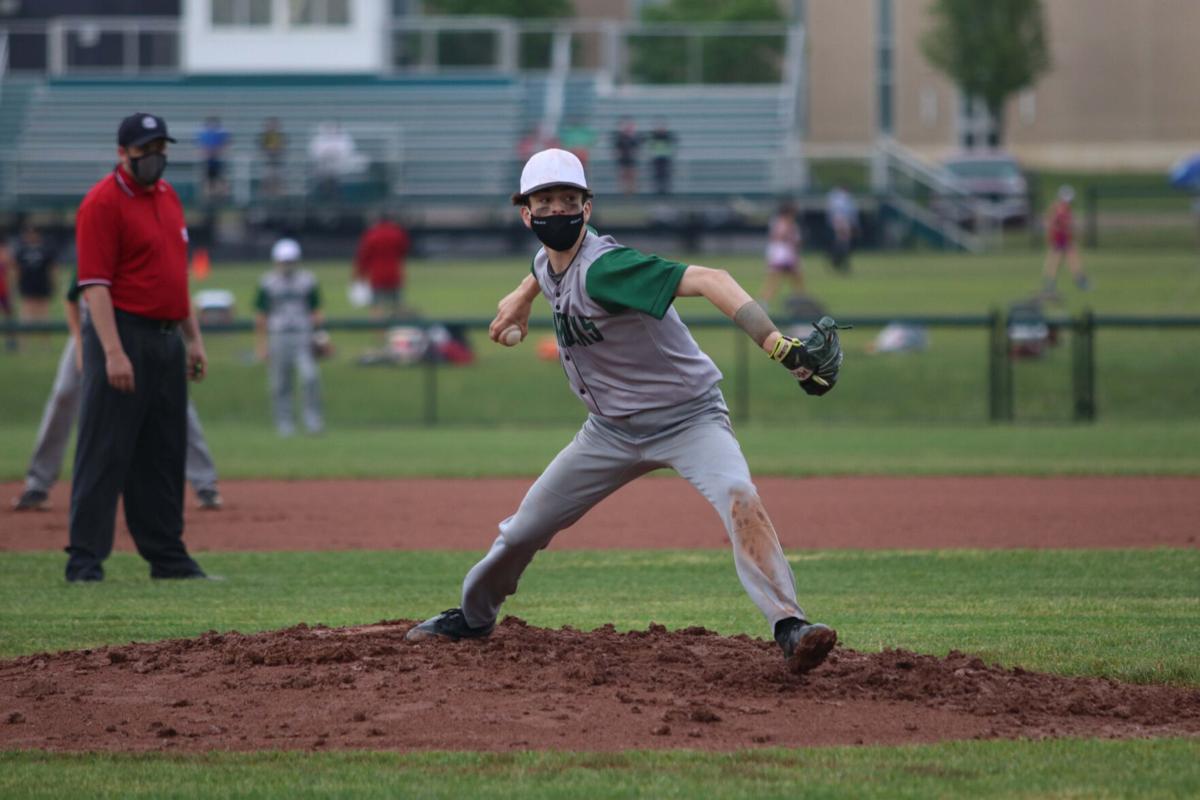 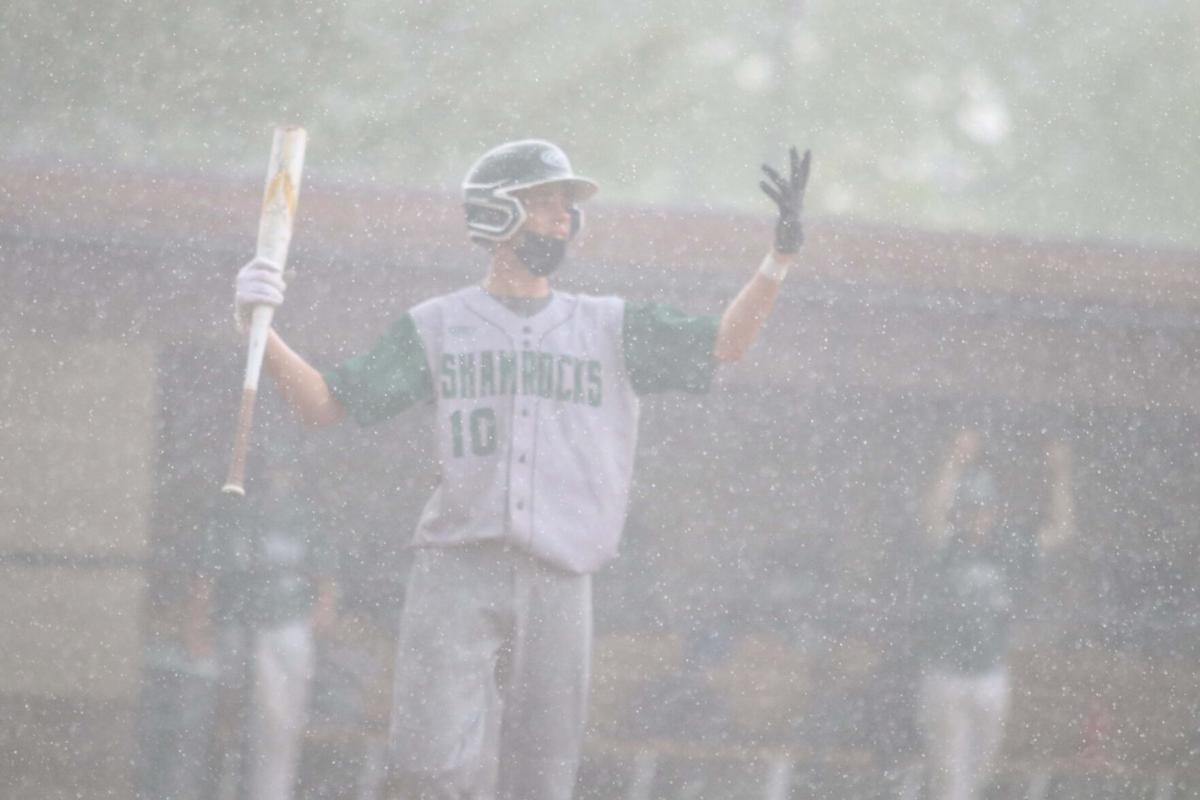 Salmon River's Rick Chatland throws his hands up as the umpires bring the game into a rain delay. Evan Wheaton/Malone Telegram 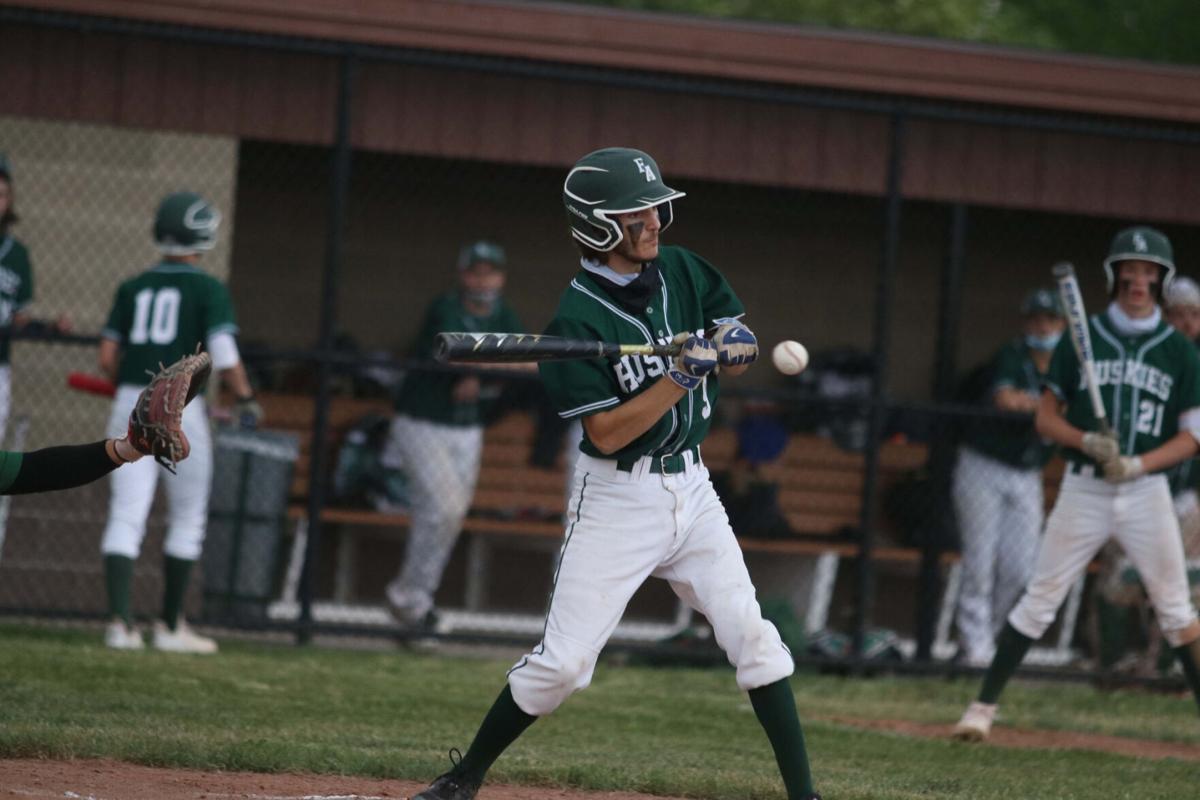 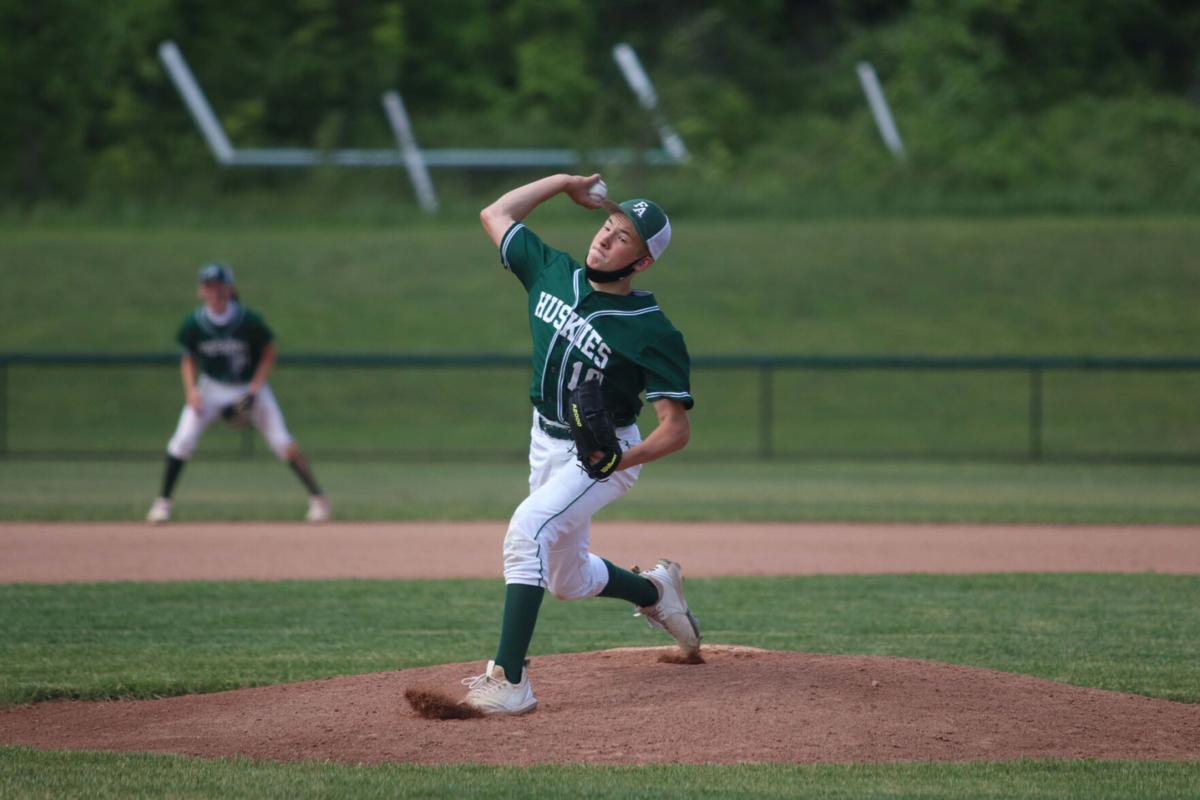 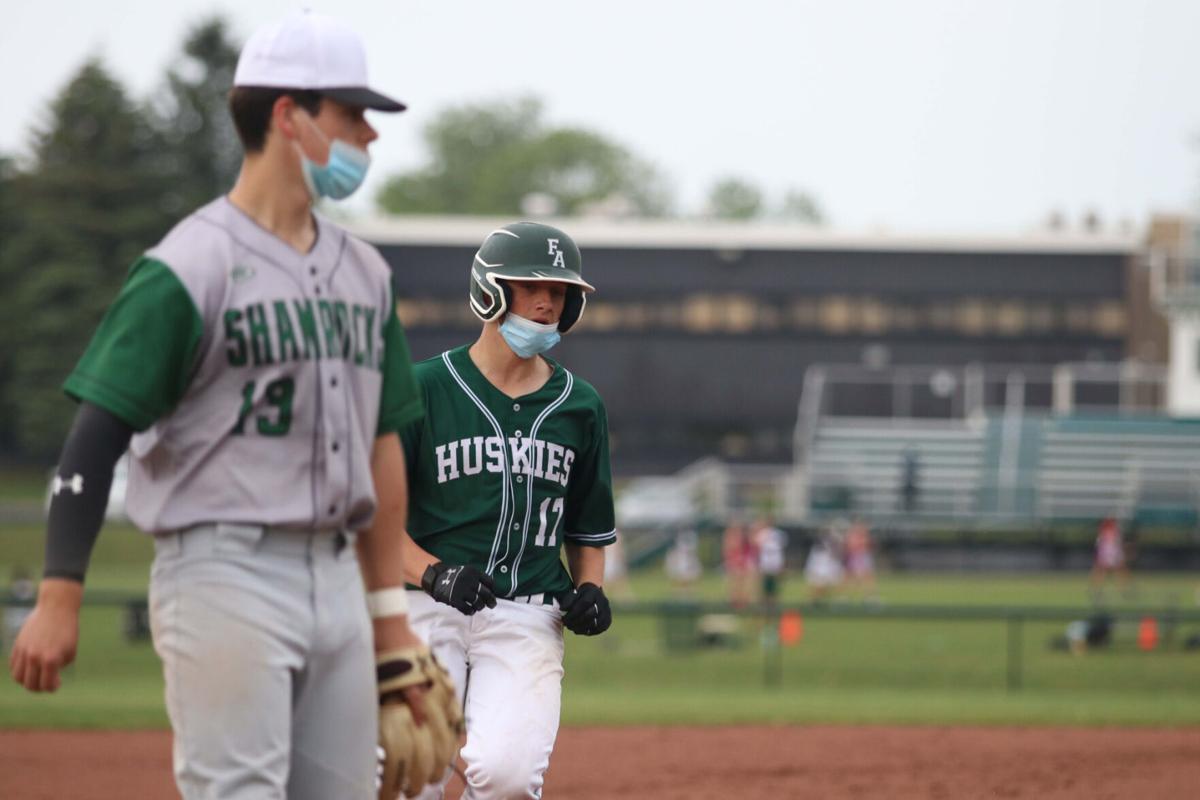 Salmon River's Rick Chatland throws his hands up as the umpires bring the game into a rain delay. Evan Wheaton/Malone Telegram

Down 2-1 with the bases loaded in the top of the fourth inning, Hungerford singled in Eli Race on a pitch from Salmon River’s Chase Lewis to tie it and put Keegan McArdle on third.

“Honestly, it was just hard getting off the bat. During the rain, it was kind of hard to even bat or run because the mound was just terrible,” Hungerford said. “We held our heads high and played as a team.”

Logan Spaulding hit a pop that brought home McArdle – and confusion sprouted on the field like flowers after the shower. The play was ruled an infield fly, giving the Huskies an out, though the run was good for a 3-2 lead.

“I didn’t hear the call, if he did make the call. In my opinion, he shouldn’t have made the call because it’s not a routine where the kid was underneath it,” Franklin Academy coach Tim Lamay said. “But it just changed the whole inning, and it took us out of that inning. An infield fly is when the infielder is camped underneath it, and he was not.”

Shamrocks coach Nicholas Yachetta had his own account of what happened.

“I was trying to find the ball, tell him where to go in case something happened. I heard, ‘Infield fly,’ I’m telling him to throw the ball to second because as a coach, you always have to throw it in front of the runner,” Yachetta said. “He calls so-and-so out, and he was confused as to what happened. I heard it, so I went out and stopped him and addressed it because otherwise, it would’ve been even worse of a situation.

“My opinion, infield fly – the ball is dead, you can’t advance. Whether that changed the outcome of the game, I doubt it. We weren’t really hitting the ball that well in between the first and seventh innings.”

Salmon River was held scoreless between the first and seventh innings, and the Huskies pulled ahead for a 6-4 finish in Fort Covington.

Jordan Perry struck out four Salmon River batters, walked five and allowed one hit in four innings on the mound. Hungerford relieved Perry in the fifth, allowing three hits and no walks.

The Shamrocks (4-3) jumped out to a 2-0 lead to close out the first inning with a two RBI double from Rick Chatland. Franklin Academy (4-5, 4-4) cut its deficit in half in the top of the third when Perry batted in Brady Hopkinson just before the rain picked up.

END 1: Salmon River 2, Franklin Academy 0Rick Chatland hits a two RBI double to put the Shamrocks up on the board first. pic.twitter.com/Us3L0bW1MR

Mid 3 | Jordan Perry bats in Brady Hopkinson to cut it 2-1. The rain is picking up, and so is the Huskies offense. pic.twitter.com/1You3FJsyt

The Shamrocks, however, weren’t done. Before the first pitch for Salmon River’s final batting order, Yachetta told Chase Lewis – the leadoff hitter – that if he got on base, more hits would come.

“And that’s what we did,” Yachetta said.

Lewis got on with a base hit, and Luke Miller brought him home with no outs. Salmon River then couldn’t find the gaps, as Connor Lewis drove one deep left for an out.

“Probably should’ve turned into a run, but left a man on second,” Yachetta said. “That kind of shifted the momentum a little bit. If it hit that left-center gap, it would’ve been a whole other ball game in the end.”

Miller was brought home on a double for the final score as the second out was made. After dropping three of their previous four games, the Huskies pulled out a gritty road win and now face a tight divisional turnaround with Ogdensburg.

“It’s something to build on,” Lamay said. “We’ve got another one tomorrow, it’s always tough playing Ogdensburg and hopefully we build upon this and get some momentum going.”