Sign Up
Log In
Purchase a Subscription
You are the owner of this article.
Edit Article Add New Article
You have permission to edit this article.
Edit
Home
News
Sports
Obituaries
Local Living
Society
Opinion
Calendar
Archives
Ads
More
Share This
1 of 14 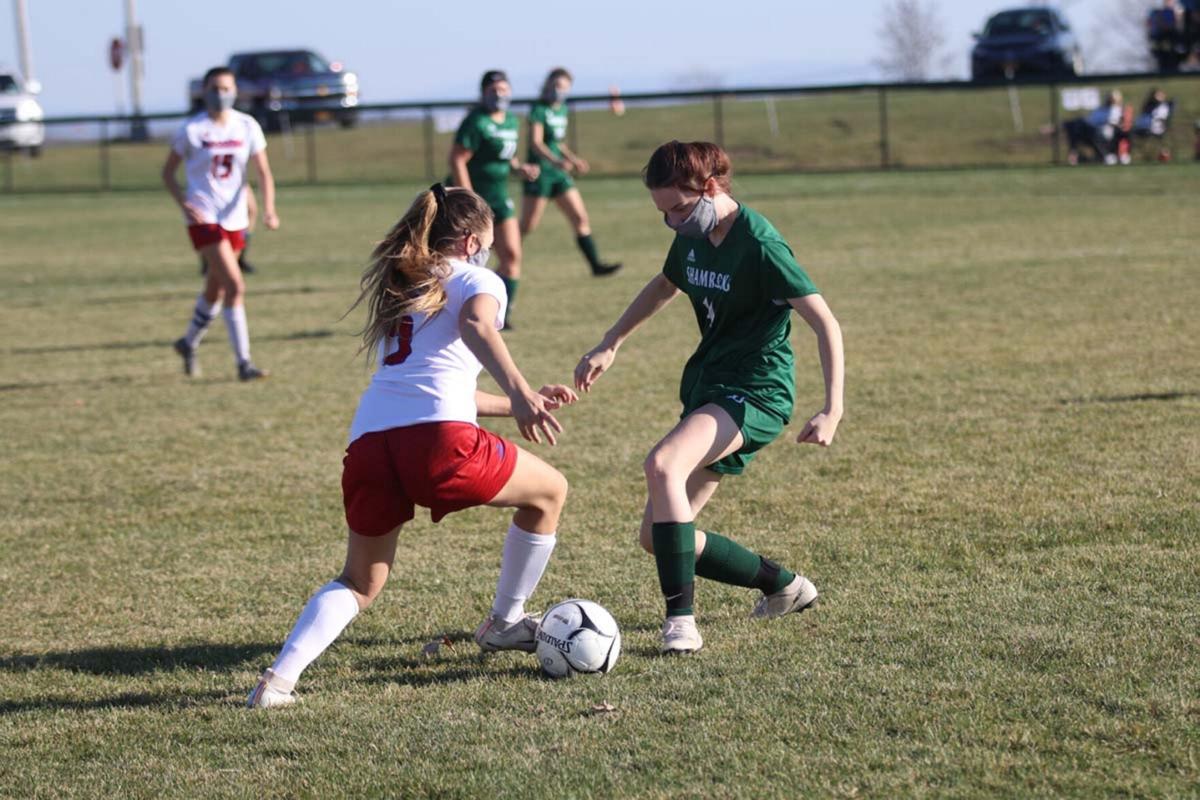 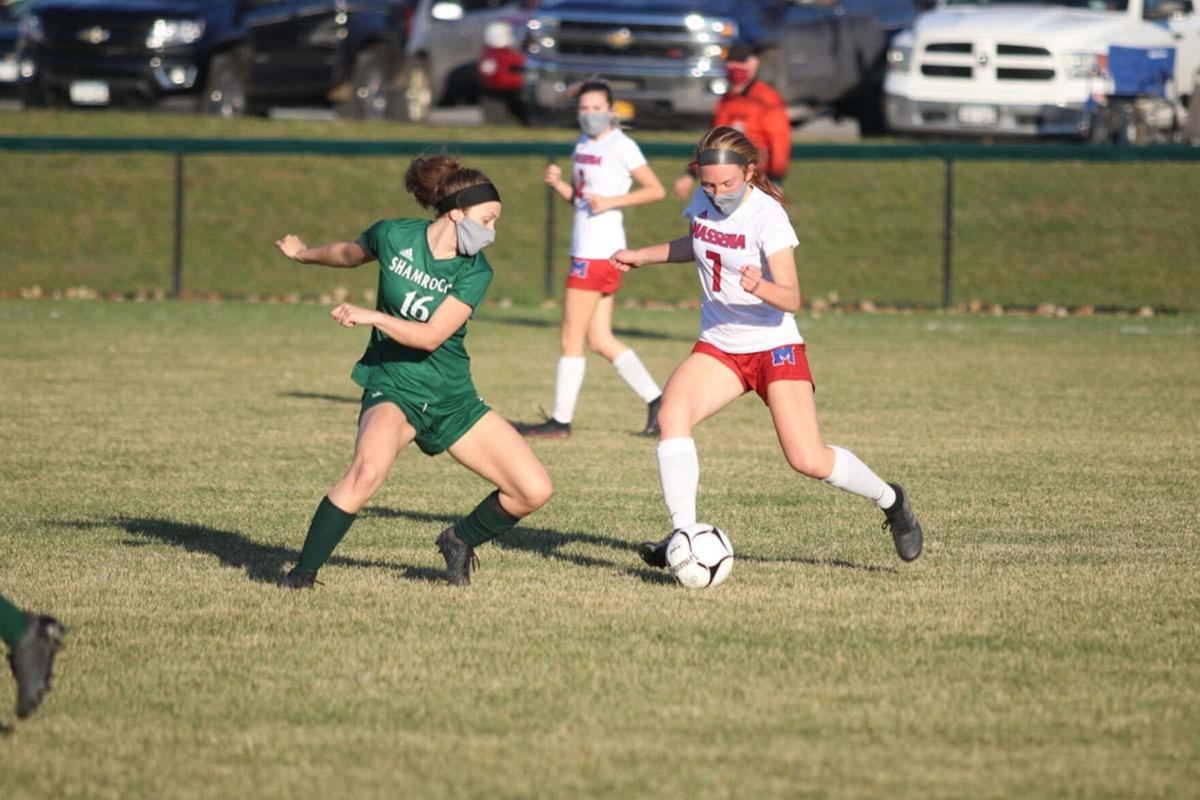 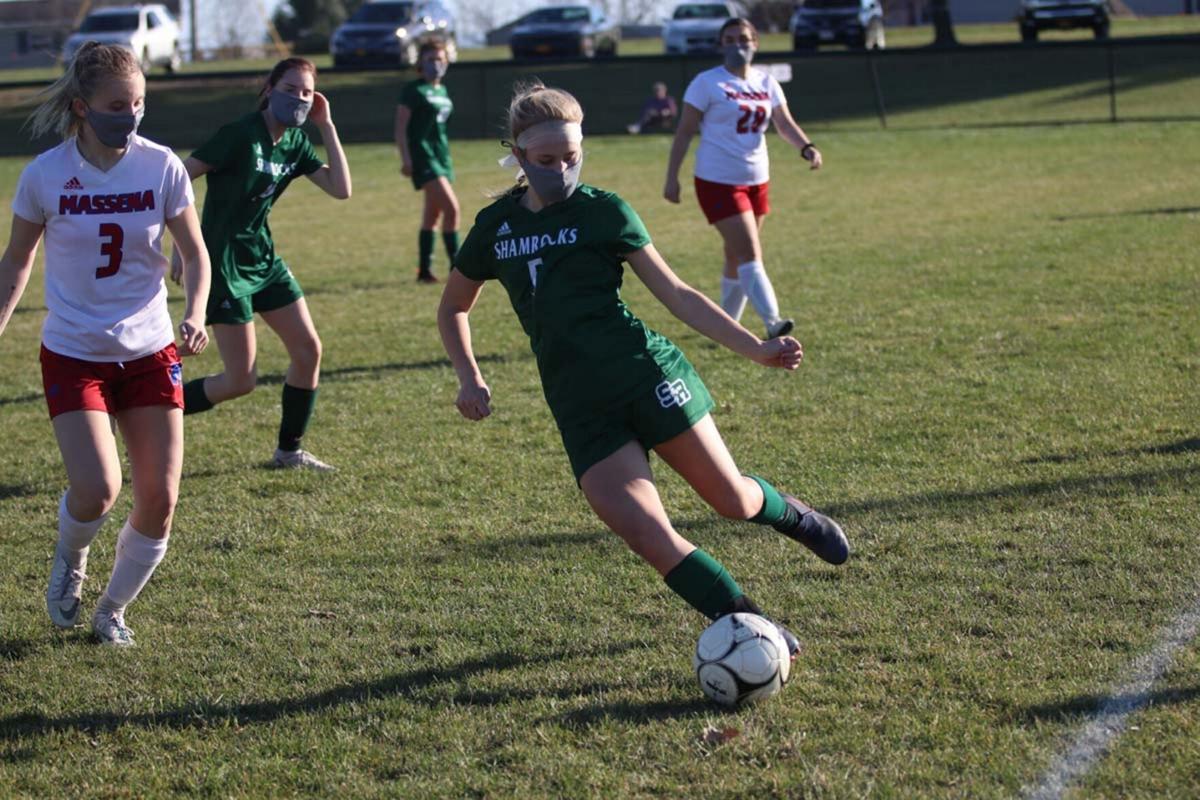 Myranda Collette keeping the ball in play along the sideline. Evan Wheaton/Malone Telegram 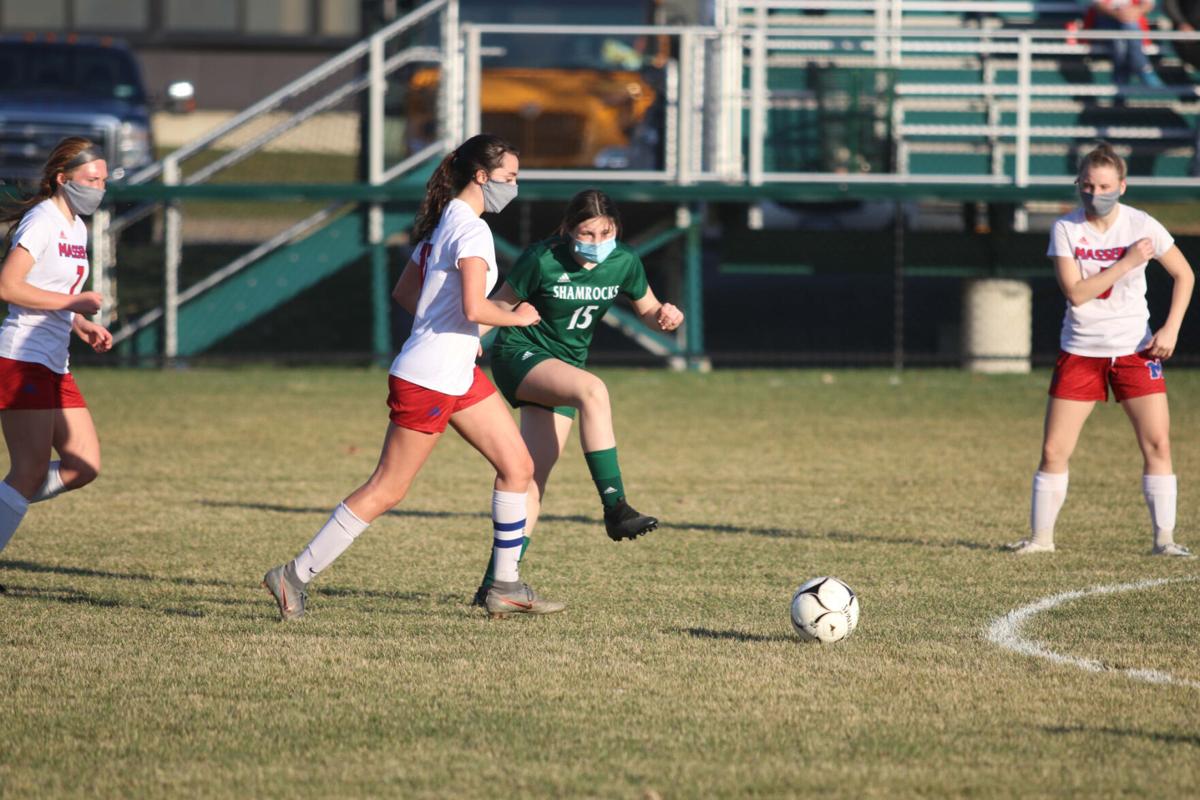 Makenna Manson in a footrace at midfield. Evan Wheaton/Malone Telegram 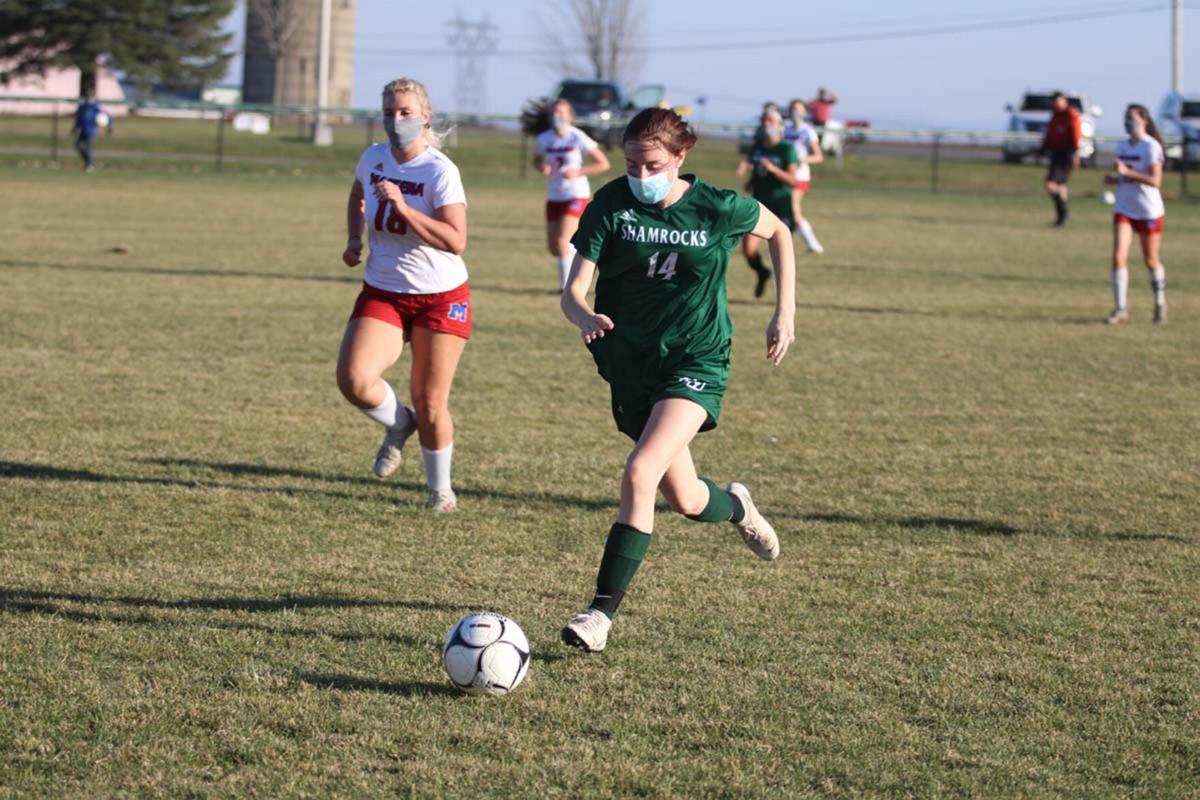 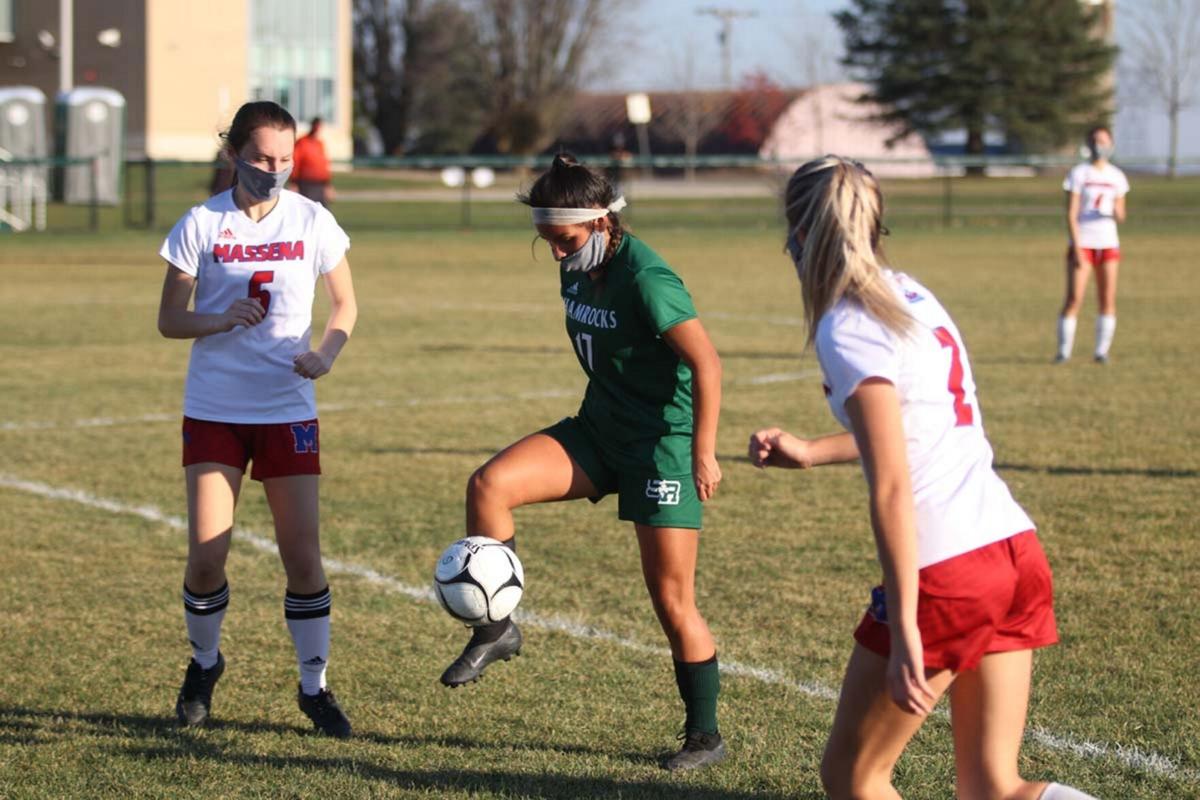 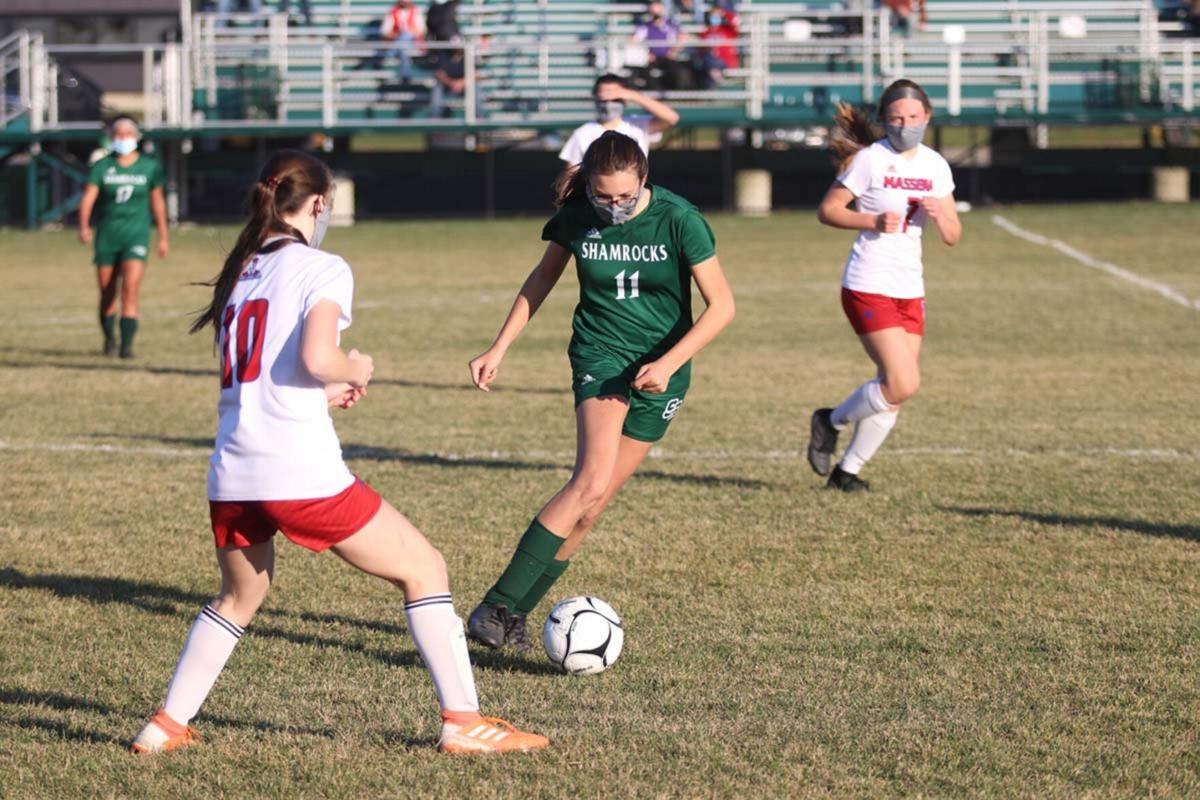 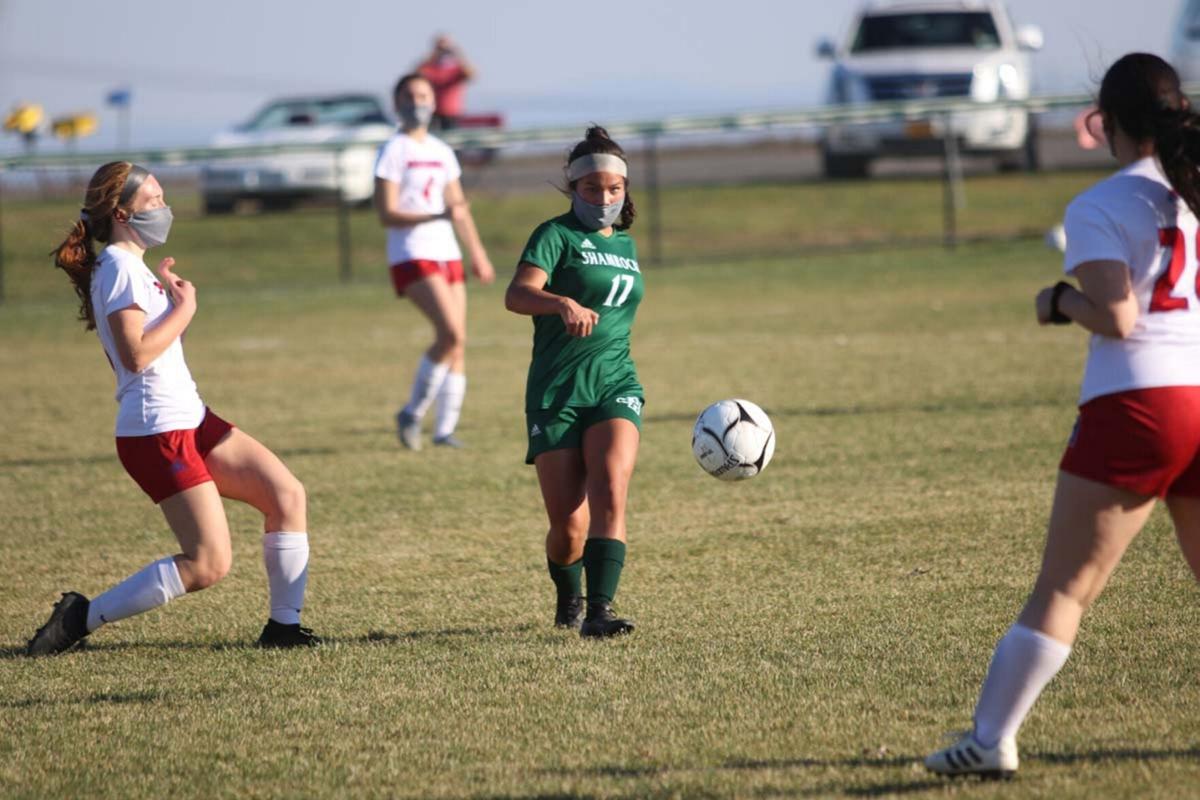 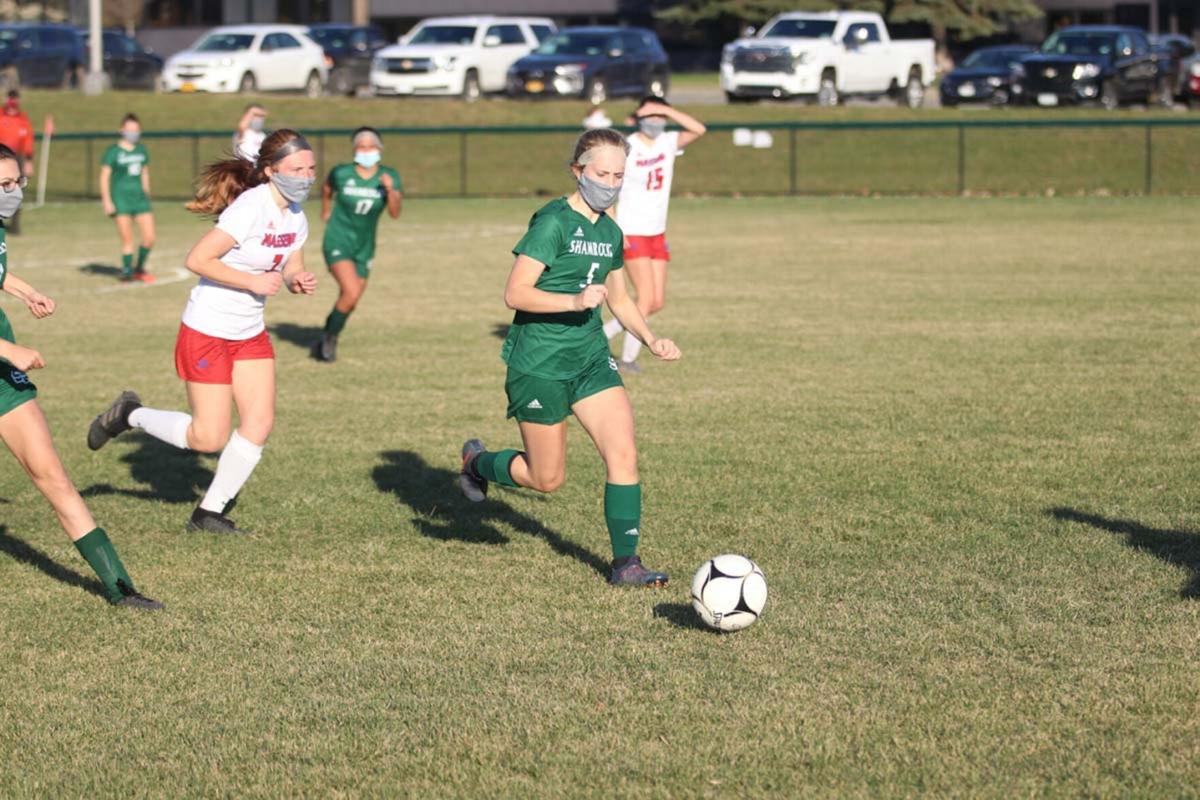 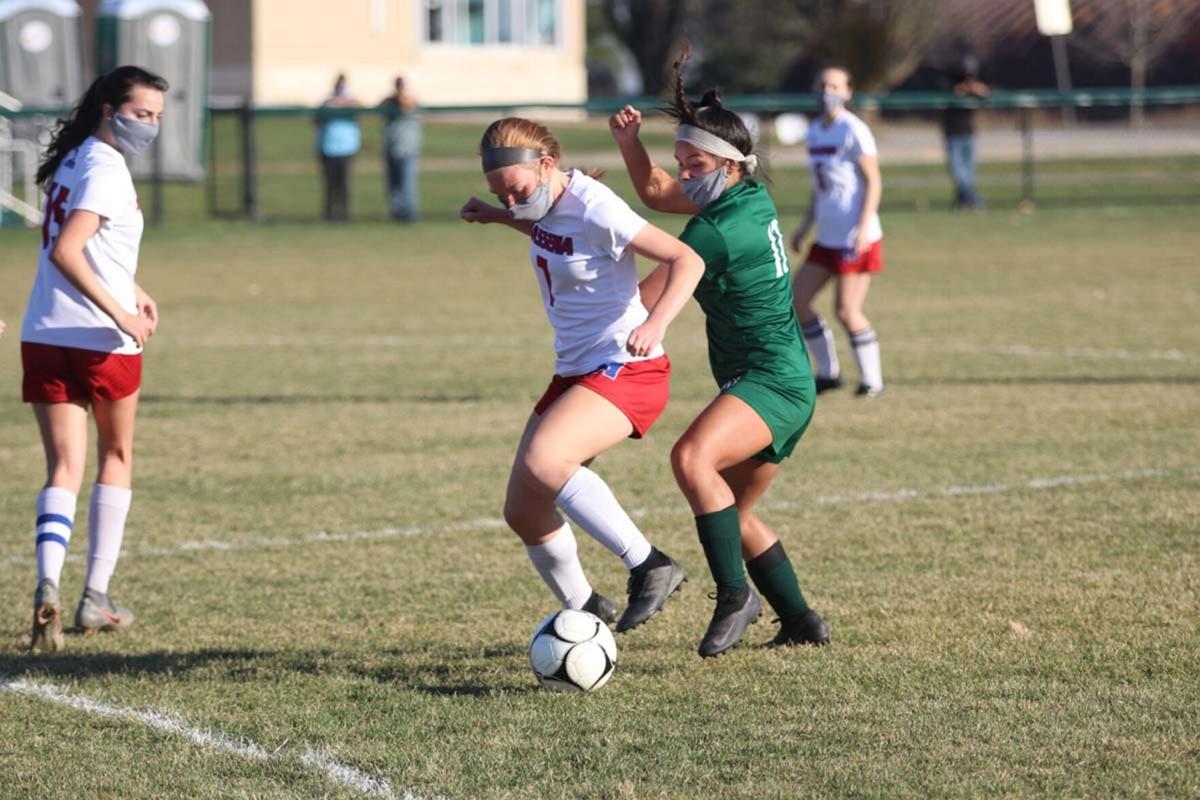 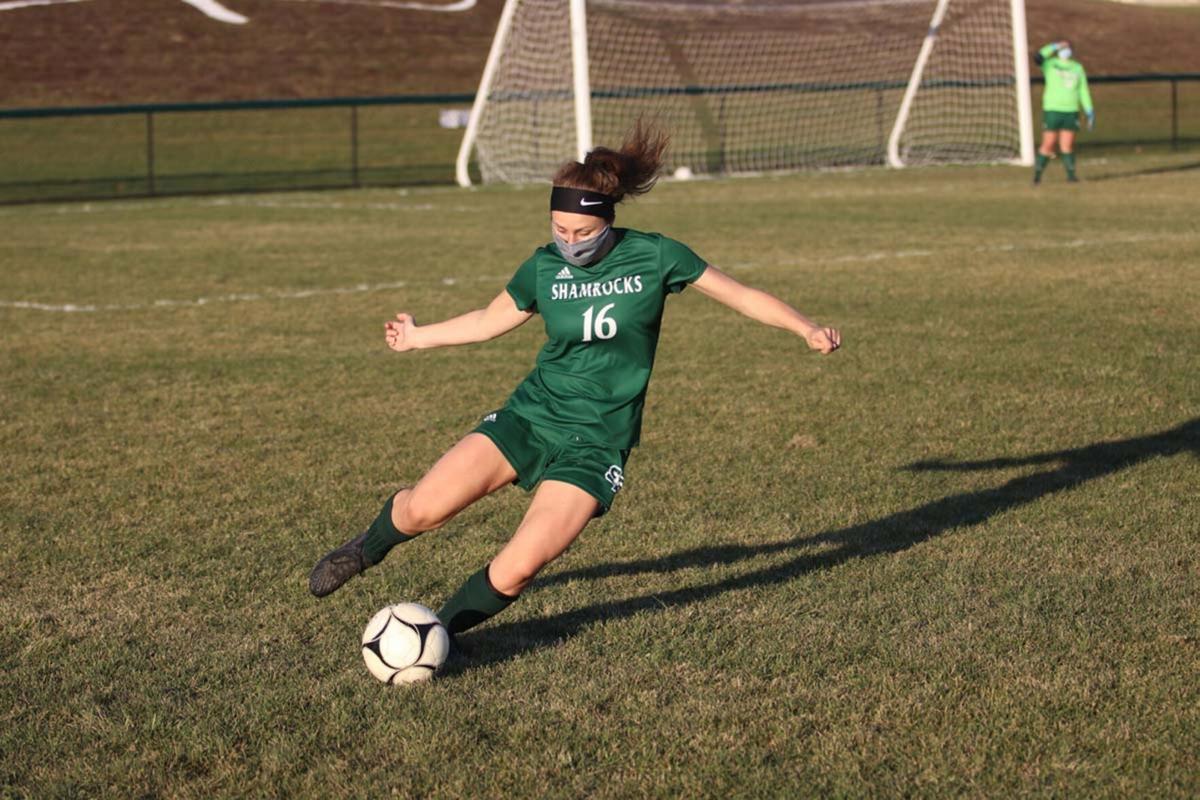 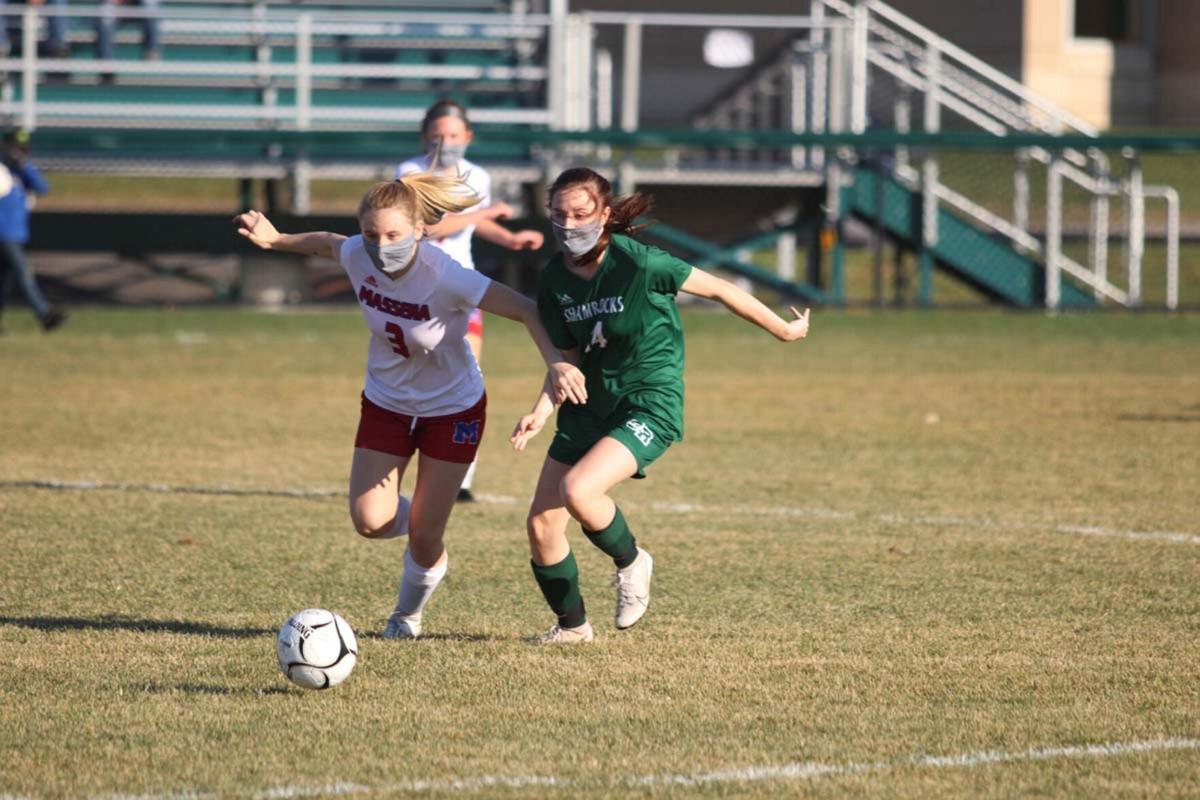 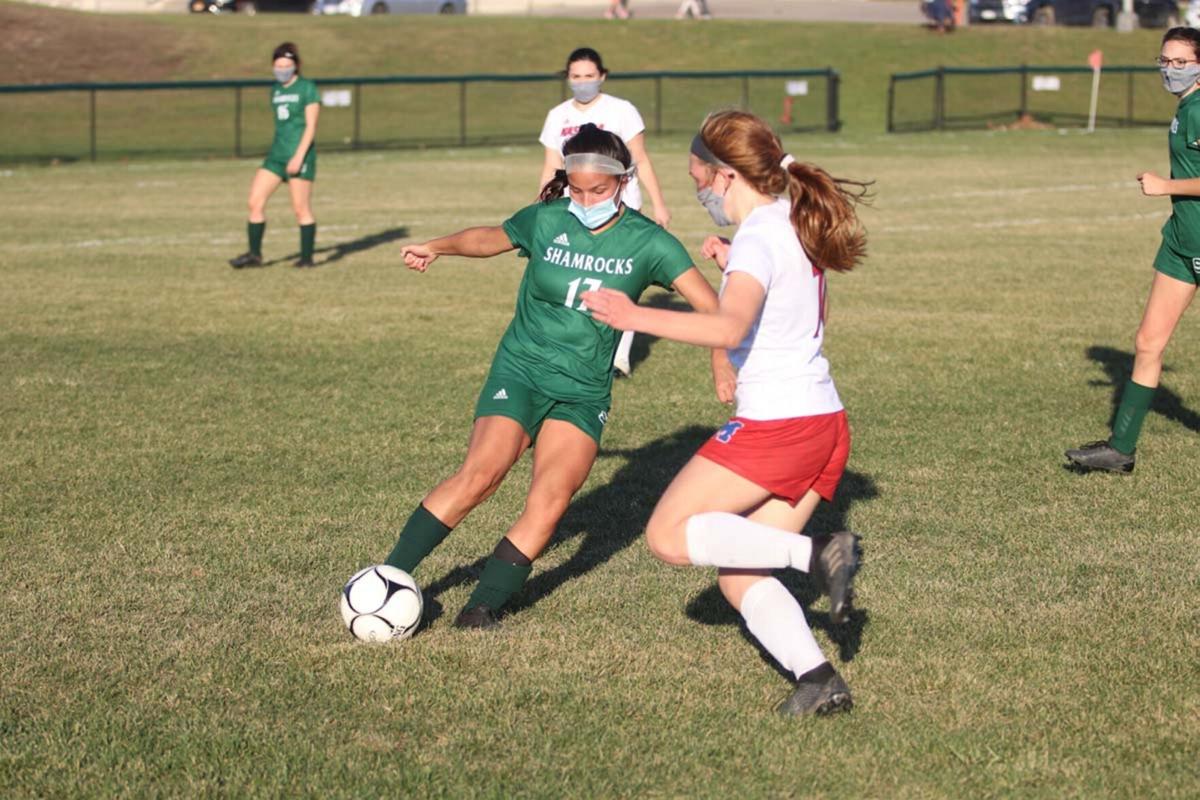 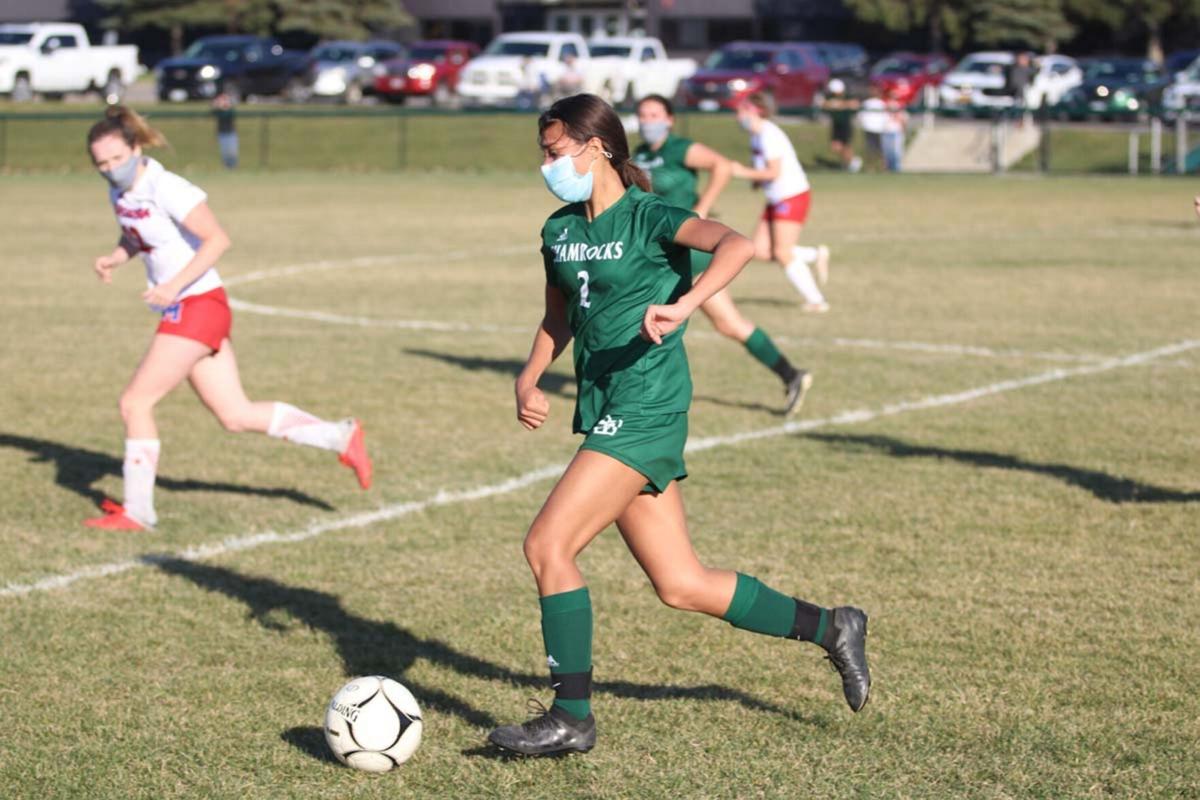 Myranda Collette keeping the ball in play along the sideline. Evan Wheaton/Malone Telegram

Makenna Manson in a footrace at midfield. Evan Wheaton/Malone Telegram

After a Shamrocks own-goal during the second minute, Massena’s Elizabeth Rogers scored a hat trick to give the Red Raiders a 4-0 lead with a little under five minutes remaining in the first half.

“She didn’t stop. She made sure she finished her runs,” Shamrocks coach Elizabeth Durfee said. “She was – I don’t want to say right place, right time – her team knew where to service the ball. She didn’t just go crashing in.”

Rogers’ efforts were enough to lift Massena over Salmon River, 6-1 on the road.

Aliyah Bingham assisted Rogers’ first goal by finding her in front of the net from the right post, and the latter poked the ball in with 27:03 on the clock.

The Red Raiders found the net in similar fashion with a pass from Jeanelle Burke after 16 minutes.

“They served the ball away from our keeper so that she could get the touch near the PK or the 18,” Durfee said. “She (Rogers) was willing to pull the trigger in one or two touches.”

Seven minutes later, Rogers drove down the right wing and delivered a shot that curved into the top left of the net to give Massena a commanding 4-0 lead.

Mckenna Laughing often found herself with separation in the offensive zone with opportunities to put goals away.

With two and a half minutes left in the first frame, Emma Ransom sent an indirect kick to Myranda Collette, who headed the ball towards the net. Laughing found the ball and delivered a shot that was muffed to the left.

The junior may not have gotten one in, but has been emerging as a spearhead for Salmon River’s offense to close out scoring drives.

“It’s nice that she’s starting to read the game. You definitely learn as you start progressing,” Durfee said. “We talk a lot about reading off a punt too, is it something that she can sneak behind the defender? Or does she need to step up in front of that defender and play with her back to the goal?

“That’s the best part, you’re seeing these games throughout the season and that’s what you want as a coach. You want to always be learning and it’s going to click for her.”

The Shamrocks experienced a momentum shift in their favor after the 53rd minute.

Makhia Snyder made a short pass to Collette, who was well outside the box near the left wing. Collette struck the ball, and after clearing over Massena’s back line, it landed in the top right of the net.

Upon cutting the deficit to 4-1, Salmon River began winning midfield battles and gaining repossessions. Collette’s goal woke up the Shamrocks.

“Oh it lets them know it can be done. It gets that fire,” Durfee said. “It was nice to see, we stepped up and put one in the back of the net. We had a couple other nice opportunities after that. So it’s there, they have the potential and it’s something we always talk about, just playing that full game.”

That momentum lasted 11 minutes until the Red Raiders capitalized on a corner kick with a goal by Laylah Bingham.

64’— Massena takes another 4-goal lead after the Red Raiders capitalize on a corner kick. Shamrocks down 5-1. pic.twitter.com/VACtgbrRVD

With 30 seconds left on the clock, Massena’s Hayleigh Armstrong connected with Brooke Terry for one last score.

“More or less they always made sure to continue their runs, and we as defenders need to make sure we’re finishing through,” Durfee said. “(Mia) Leroux didn’t really have rebounds, which was a great job on her part.

“(She) held the ball strong, so that didn’t necessarily become a factor. But just always making sure we’re within a step of our mark. Forwards are meant to be dangerous to be able to fire the ball off in less than two touches.”