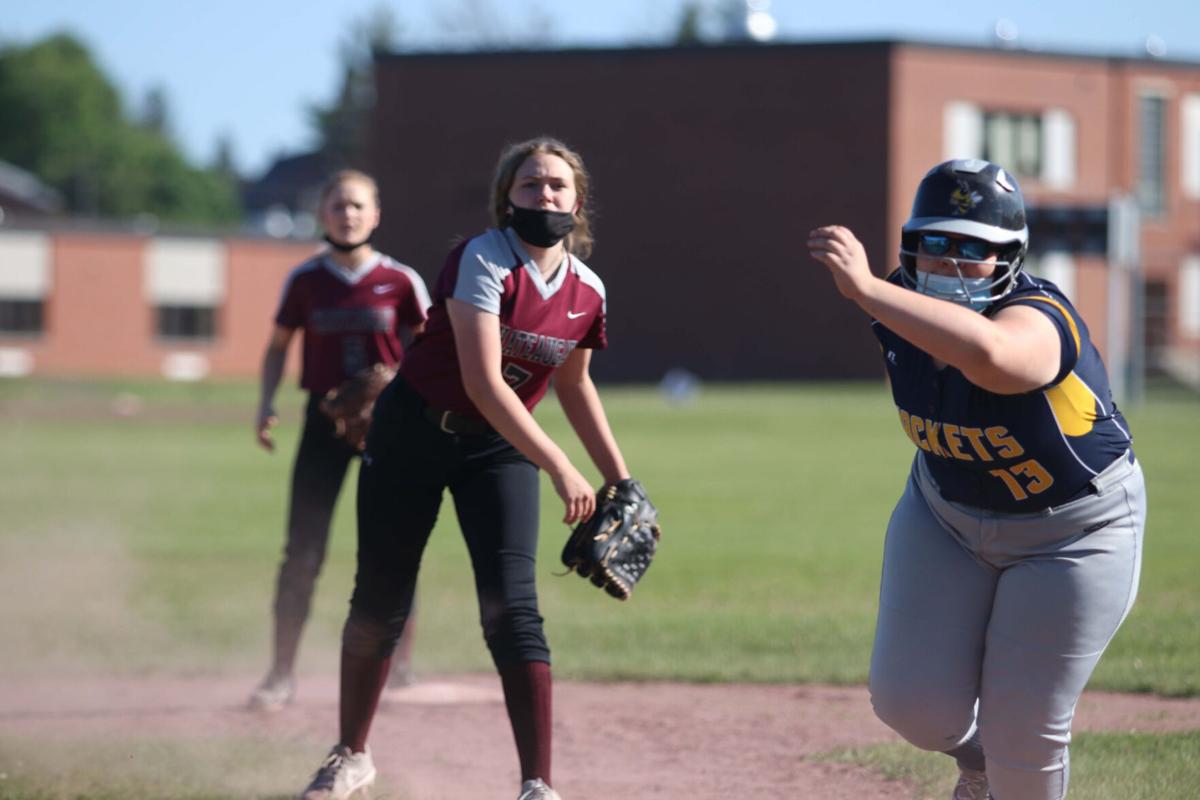 Madrid-Waddington's Adriiauna Willard (right) runs back to first base after an out at second. Chateaugay's Victoria Titus (center) threw the ball to first to make the double play. Evan Wheaton/Malone Telegram 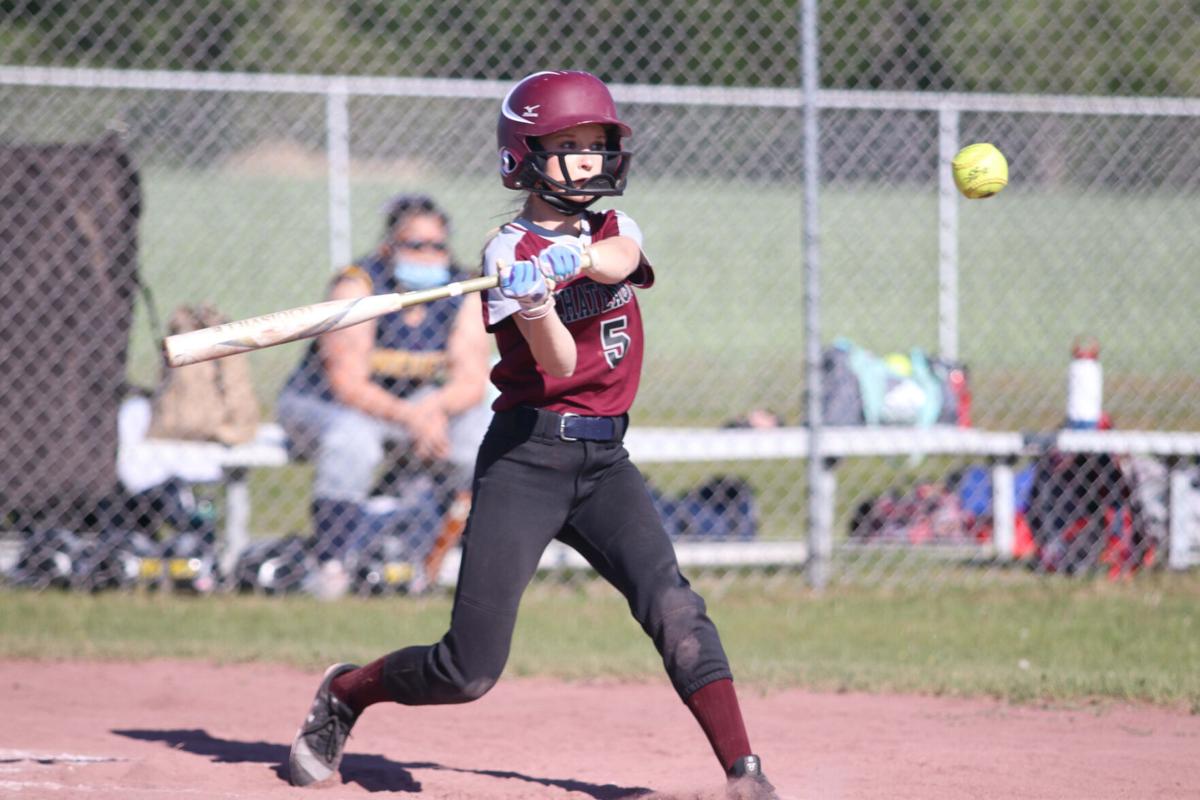 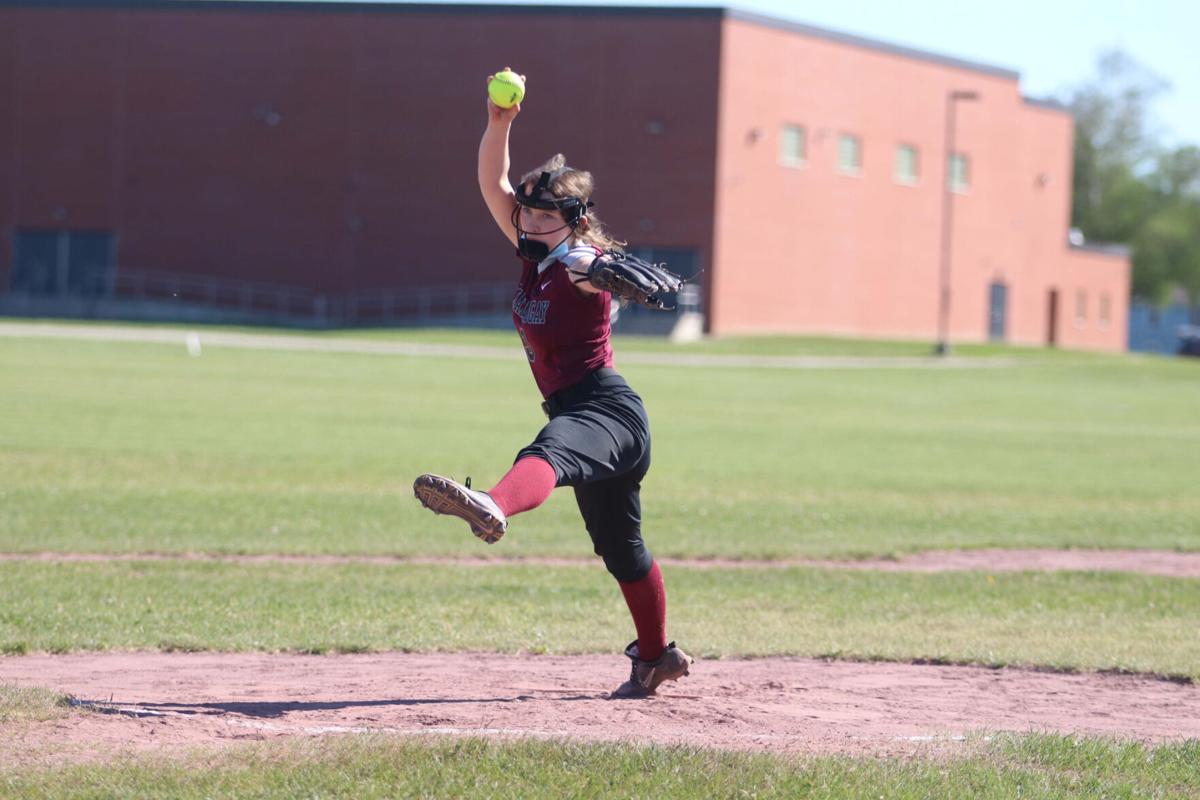 Chateaugay pitcher Avery McDonald pitched six innings for the Bulldogs with seven strikeouts and three walks allowed. At bat, McDonald took a permanent lead for the Bulldogs after making a triple off a bunt and running home after. Evan Wheaton/Malone Telegram 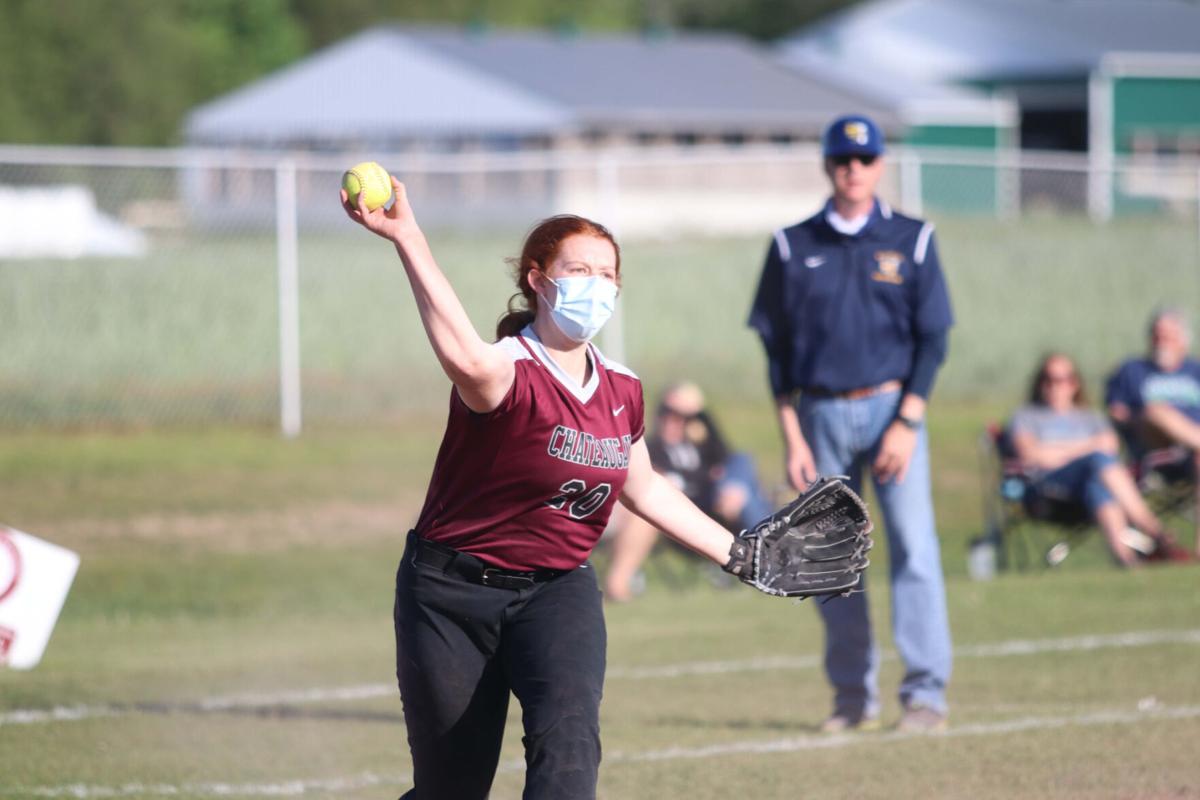 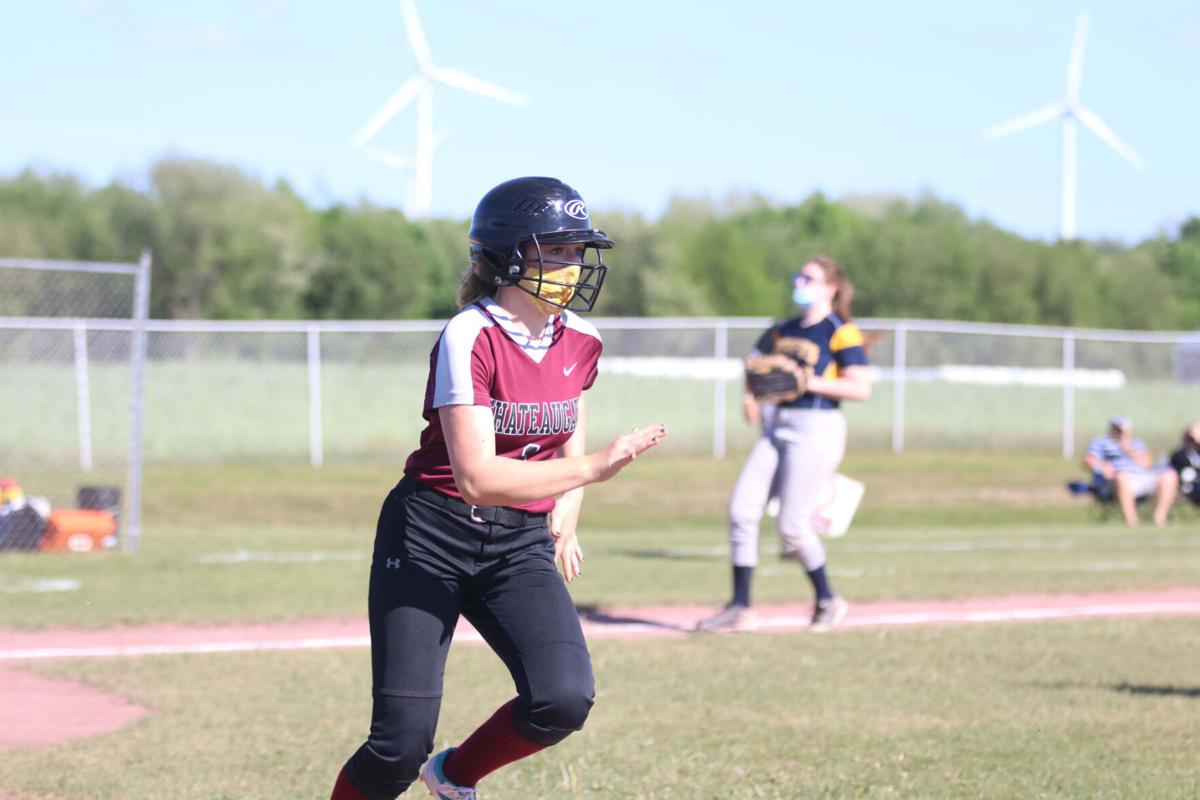 Madrid-Waddington's Adriiauna Willard (right) runs back to first base after an out at second. Chateaugay's Victoria Titus (center) threw the ball to first to make the double play. Evan Wheaton/Malone Telegram

Chateaugay pitcher Avery McDonald pitched six innings for the Bulldogs with seven strikeouts and three walks allowed. At bat, McDonald took a permanent lead for the Bulldogs after making a triple off a bunt and running home after. Evan Wheaton/Malone Telegram

“I just kind of swung and I didn’t really swing correctly,” she said.

Reese Fuller’s pitch met McDonald down the middle, and it was knocked a foot in front of the plate. McDonald bounded to first – when the ball slipped past the first baseman.

Among chants from the Bulldogs’ dugout, McDonald made it to second – when the ball fell in the infield and flew past the second baseman. The gears spun again, and McDonald threw the jets on one more time to take third.

“It was worth it,” McDonald said of her bunt triple.

McDonald ran home shortly after to give Chateaugay a 4-3 lead in the bottom of the third inning. It proved to be a permanent one, as the Bulldogs defeated the Yellowjackets, 12-4 at home on Monday.

Kaelyn Morgan made three base hits and had a game-high three runs for Chateaugay (5-3). Racheal Jarvis and Kylee Peterson had two runs via two walks. McDonald pitched six innings, striking out seven batters and walking three.

Fuller (two strikeouts, 11 walks) pitched the first four innings for Madrid-Waddington (5-6, 5-5), and Caeleigh Burke relieved her midway through the top of the fifth. Burke struck out two batters and walked two.

McDonald delivered three K’s in the top of the first inning, but not before a pair of RBIs from Annie Basford and Burke gave the Yellowjackets an initial 2-0 lead.

Mid 1 | Avery McDonald strikes out three, but a pair of RBIs for Annie Basford and Caeleigh Burke puts the Yellowjackets up 2-0. pic.twitter.com/QscRGBj5H4

The Bulldogs responded with a pair of runs in the bottom of the second when Morgan batted in Jarvis. Morgan came home shortly after, and Chloe Champagne hit a single on a 2-2 pitch to run in Peterson for Chateaugay’s initial lead.

“We just kind of pecked away, slowly, offensively,” Bulldogs coach Jason LaPlante said. “Get a couple here, get a couple there.”

B2 | After stealing third, Morgan comes all the way home.Bulldogs tie it 2-2, one out. pic.twitter.com/S5tgKmbIuc

END 2 | Chateaugay 3, Madrid 2Chloe Champagne hits a single on a 2-2 pitch to bring home Peterson and take the lead for the Bulldogs. pic.twitter.com/nnMy2NpHba

After retiring the sides, it was the Yellowjackets’ turn to tie things up, 3-3 with an RBI double from Lacey Sullivan.

“We made a couple mistakes early and then we kind of showed up on defense and made the plays,” LaPlante said. “Avery pitched one heck of a game, didn’t allow too many hard-hit balls and her defense plays behind her. When they did get on base, we didn’t allow them to advance. We kept them to one base and we were able to hold them scoreless most of the game after that.”

Madrid-Waddington didn’t find another run until Aynsley French singled in Burke in the top of the sixth. By then, the Yellowjackets were down by seven runs.

Madrid-Waddington had numerous wild pitches, and Chateaugay was able to make some of its runs off them.

“We have a lot of speed, and we like to use it to our advantage,” LaPlante said. “They had some wild pitches and we were able to capitalize and score on those pitches, which is important because they pitched a pretty good game.”

B3 | Jarvis home on a wild pitch. Chateaugay extends its lead, 5-3 with no outs. pic.twitter.com/M3pS6RbPxX

Marissa Manning drove the ball deep right to bring home Morgan for the final run of the game. While the Bulldogs didn’t make many hard hits, they used their speed and dexterity in base running to make timely steals throughout the day.

“We didn’t have a lot of hard-hit balls. We hit a few, but not hard-hit balls,” LaPlante said. “Sometimes you have to capitalize on that stuff, and we were able to steal and get those fastballs and score. Speed helps, (having) fast kids really helps.”

The Bulldogs – holding a 6-3 advantage – piled on four runs in the fifth inning to balloon their lead to 11-3. Chateaugay kept riding its momentum from McDonald’s bunt triple and carried it the distance.

“We work better when we’re pumped up,” McDonald said. “Due to us winning, we got fired up more.”