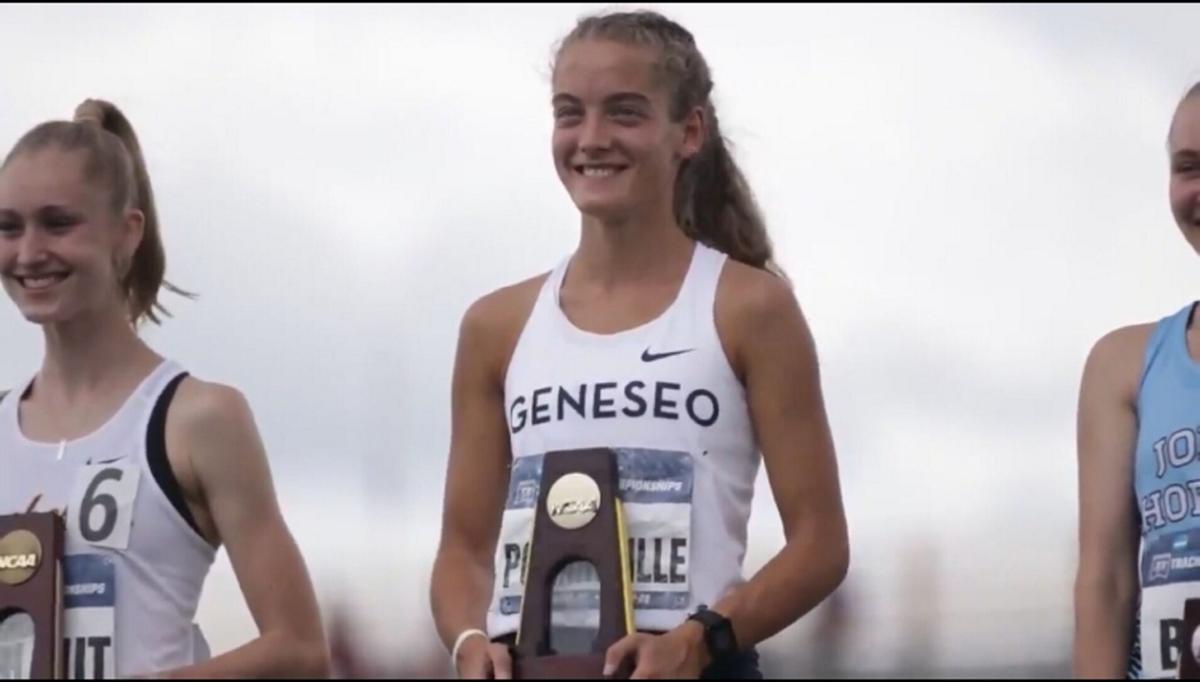 Emily Pomainville (center) holds her national championship trophy after winning the women's outdoor 1,500 meter at the NCAA Division III outdoor track and field championships. The Franklin Academy grad set an NCAA championship meet record as well as an NCAA 1,500 meter record with a time of 4:13.69 in the prelims. Temitope Bajulaiye/Babson College 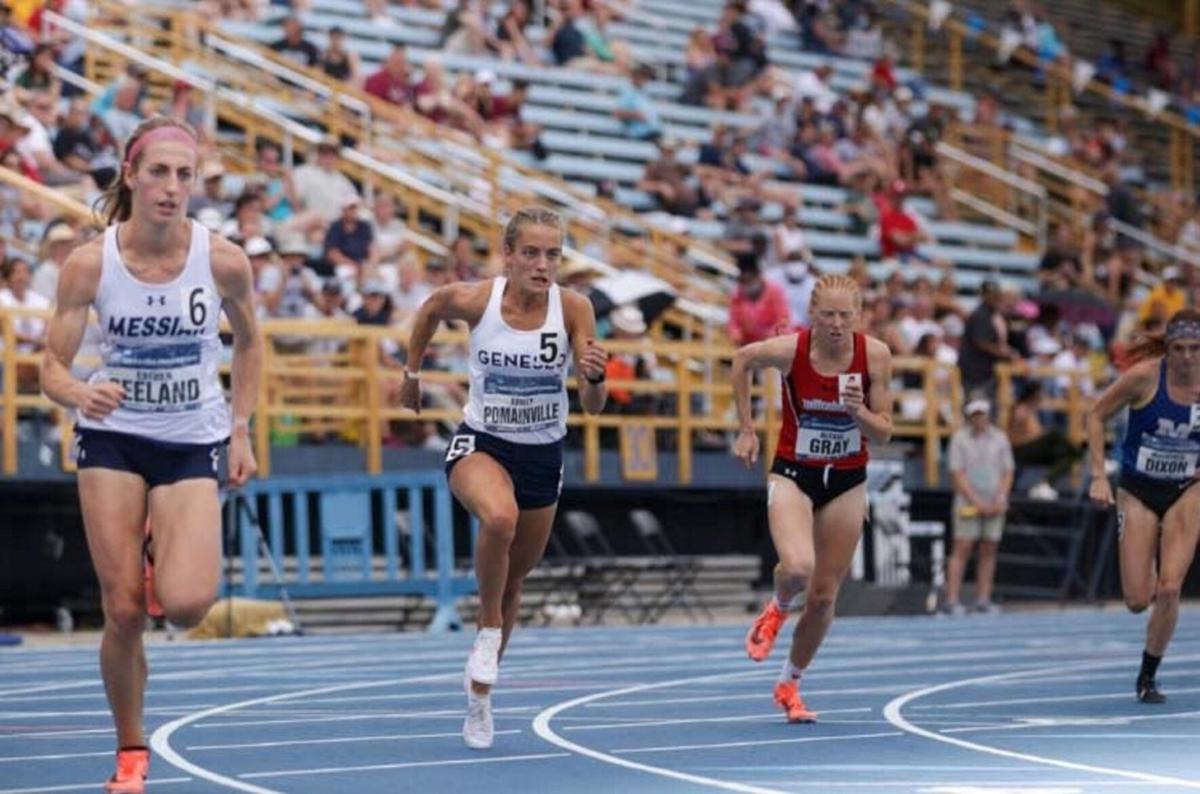 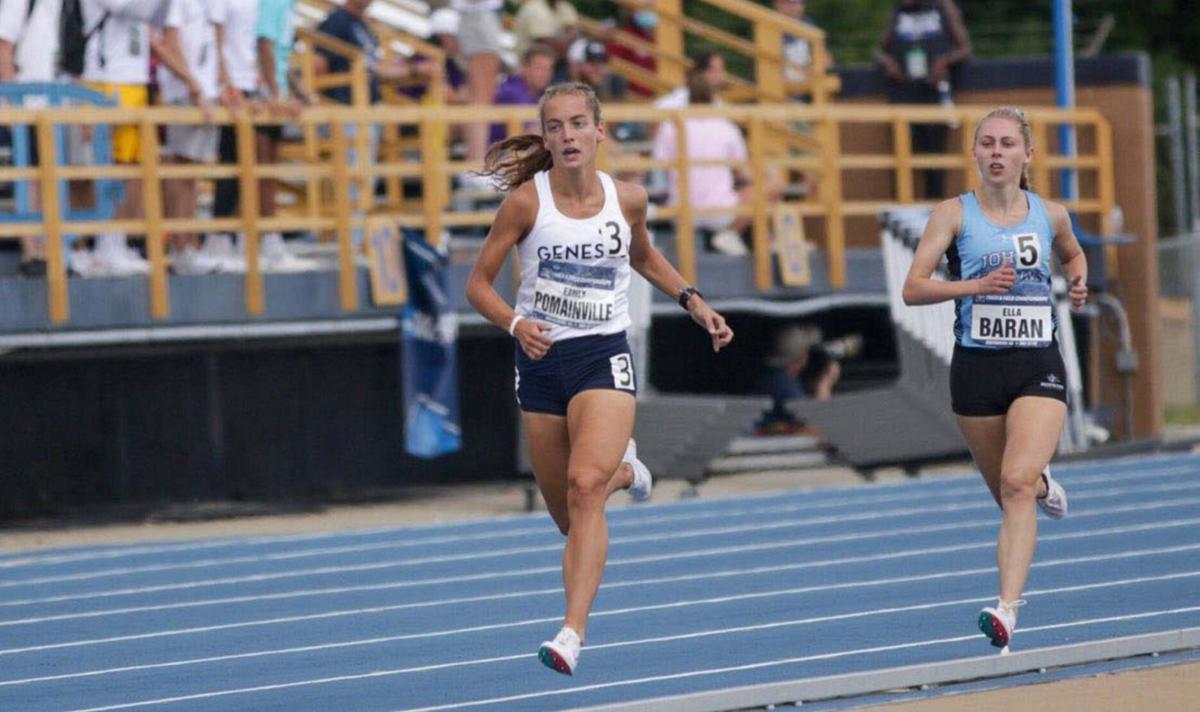 Emily Pomainville (center) holds her national championship trophy after winning the women's outdoor 1,500 meter at the NCAA Division III outdoor track and field championships. The Franklin Academy grad set an NCAA championship meet record as well as an NCAA 1,500 meter record with a time of 4:13.69 in the prelims. Temitope Bajulaiye/Babson College

MALONE – There’s no way around it. It was a fitting end for Emily Pomainville’s undergraduate years at SUNY Geneseo last week.

The senior capped off her sensational season at the national championships in Greensboro, N.C. by setting an NCAA Division III record in the women’s 1,500 meter prelims on Thursday with a time of 4:13.69.

“I think it’s a good end to the past four years, just because so much has been taken away with COVID,” Pomainville said. “To finally take something back that I’ve been working for, for a year now, it feels really good to achieve something like that.”

Over the course of the season, Pomainville has been named PrestoSports Women’s Track Athlete of the Week multiple times, and has shattered NCAA records en route to helping lift the Knights to a third place team finish at nationals – the highest in school history.

On Wednesday, Pomainville was named National Women’s Track Athlete of the Year by the USTFCCAA.

So, what’s next for the Franklin Academy grad?

One last meet on Sunday, right before the U.S. Olympic Track and Field Trials qualifier deadline on June 6. Pomainville will fly out to Nashville, Tenn. On Friday where she will compete in 1,500 meter at the Music City Track Carnival.

Pomainville – who’s plan at the beginning of the year was to run her best by the end of it – already far exceeded her own expectations. She plans to keep things simple ahead of the meet.

“My goal at the beginning of the season was to run as fast as I could in the 1,500 by the end of the year. Time-wise, that doesn’t really mean much,” Pomainville said. “I do think my 4:13 is way above what I thought I could achieve over the course of the season. I do think I could take off another second or two – depending on the day – how I’m feeling on Sunday.”

For SUNY Geneseo coach Daniel Moore, Pomainville’s ability to not only accomplish what she sets out to, but to do so by large margin, has been most impressive for him.

“We talk about a goal. She digests it and accomplishes it. I haven’t seen an athlete that can do that,” Moore said. “It’s not like we’re talking just a few seconds faster. She’s just taking chunks of time off. It’s absolutely remarkable and unprecedented. I’ve never seen anything like this.”

Having just completed his sixth year at the helm of SUNY Geneseo women’s track and field, Moore described Pomainville as a generational talent.

“The meditation and the thought process to go in just really dive in physically, mentally and emotionally to do this is the most resounding, impressive thing that I’ve seen out of a runner since I’ve been coaching,” Moore said.

Due to the COVID-19 pandemic taking away a full season, Pomainville – like all spring athletes – retains a full year of eligibility for NCAA competition. She plans to take a gap year to figure out whether she’ll be back for the Knights or not.

“I’m not going back to school in the fall just because of how everything went with the pandemic,” Pomainville said. “I’m kind of drained from academics right now.”