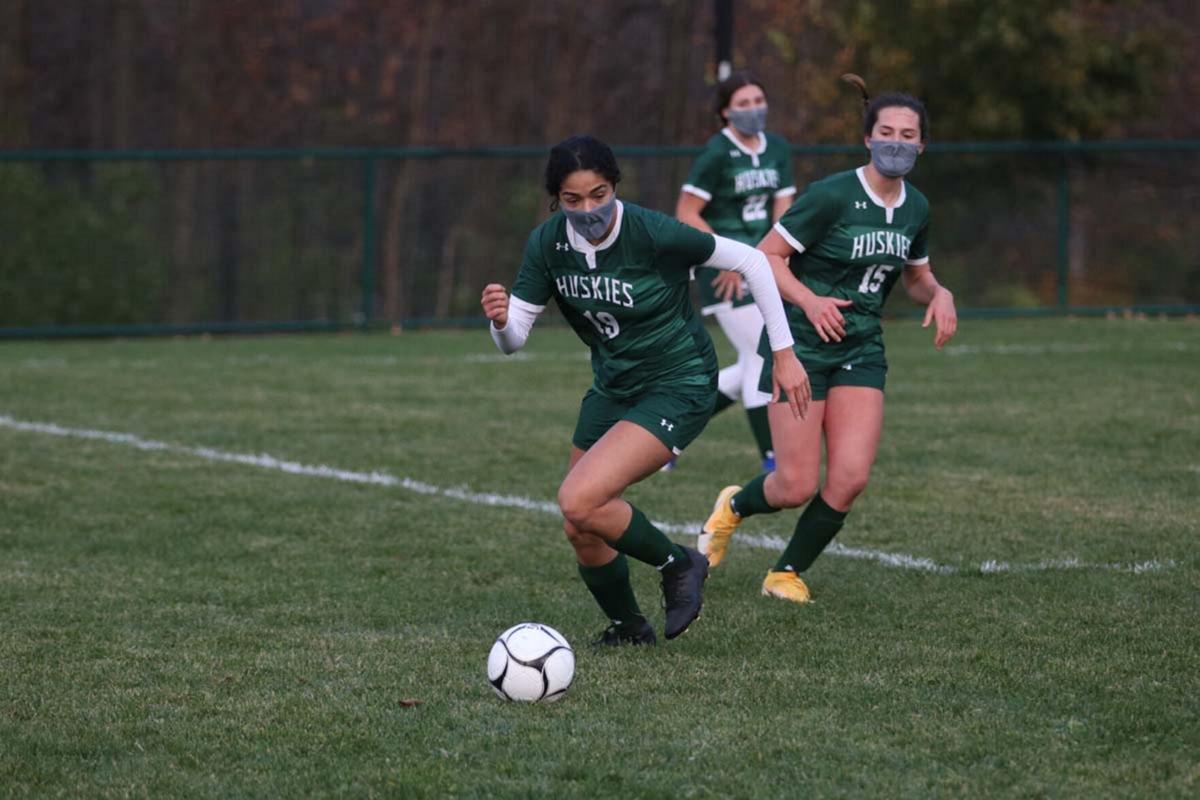 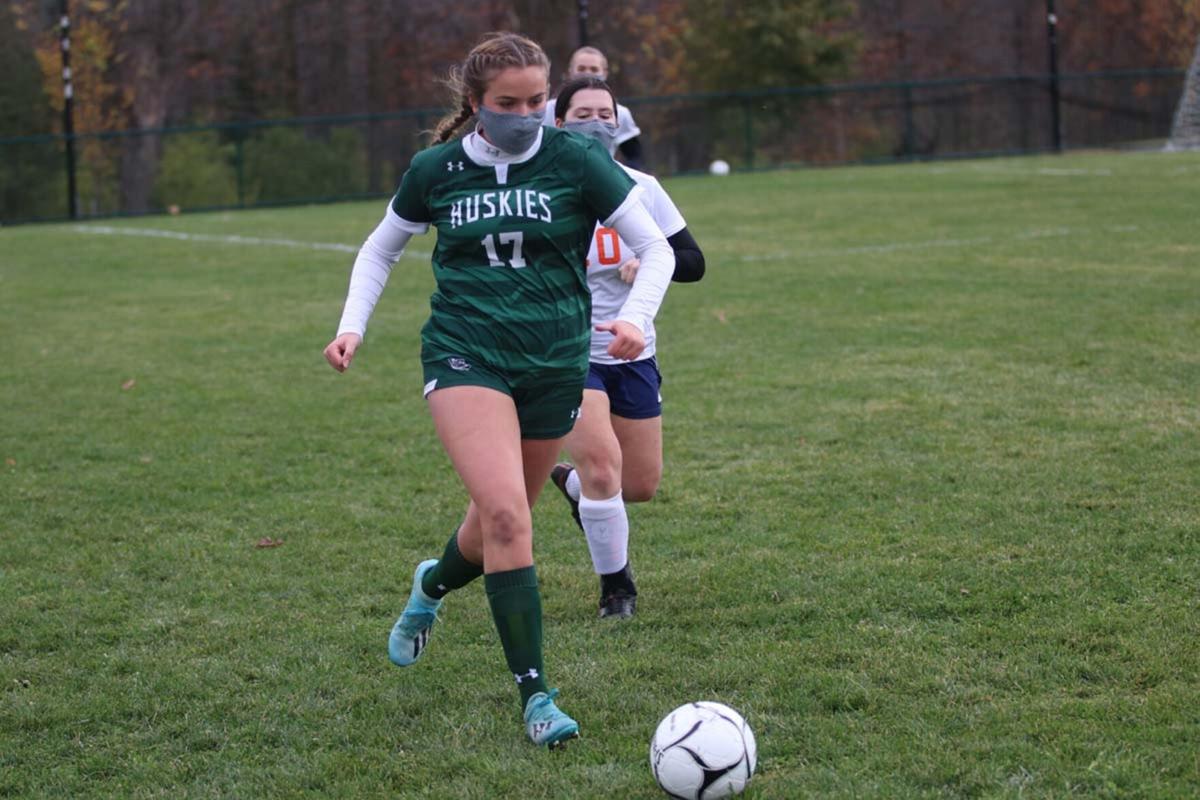 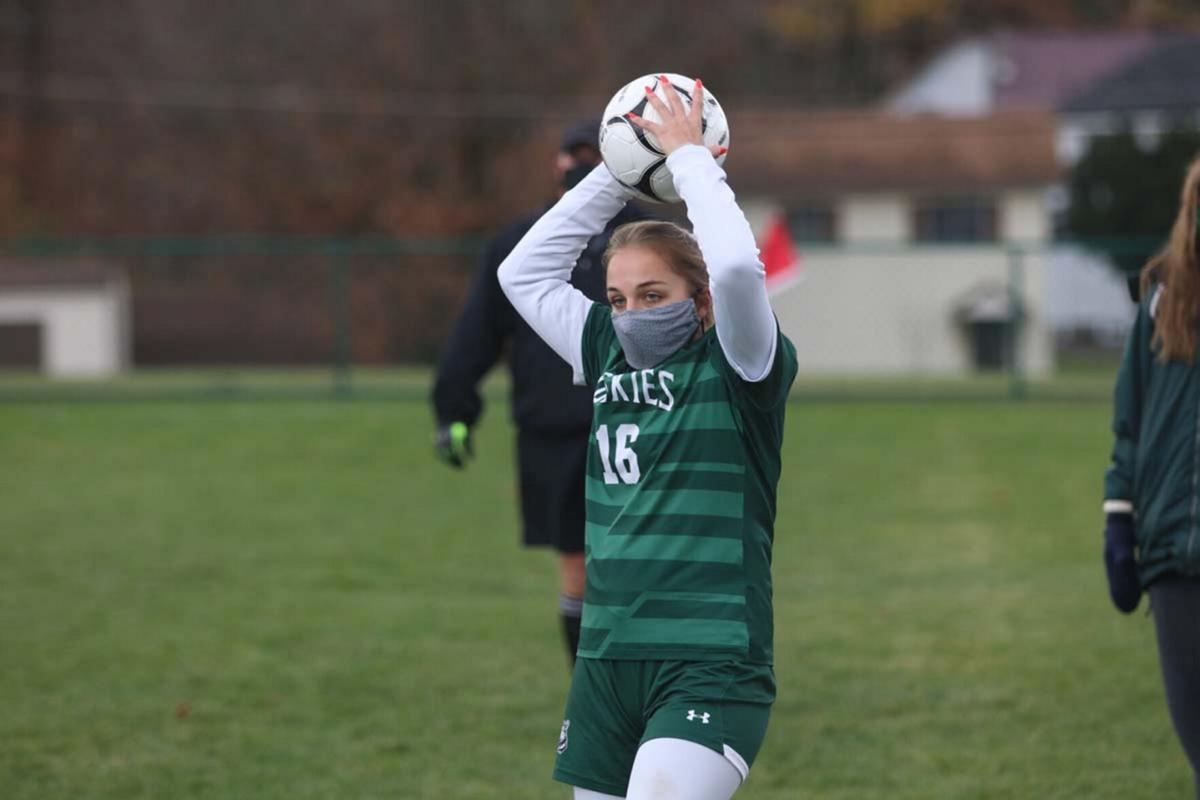 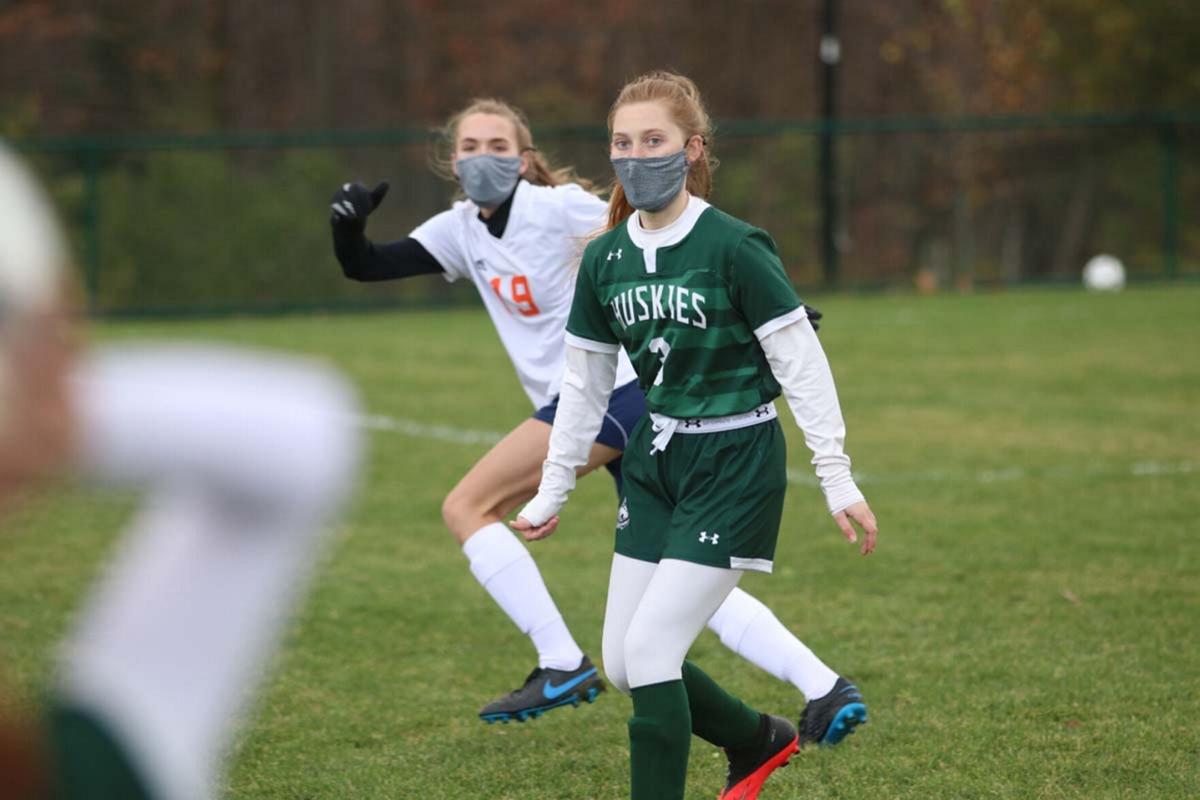 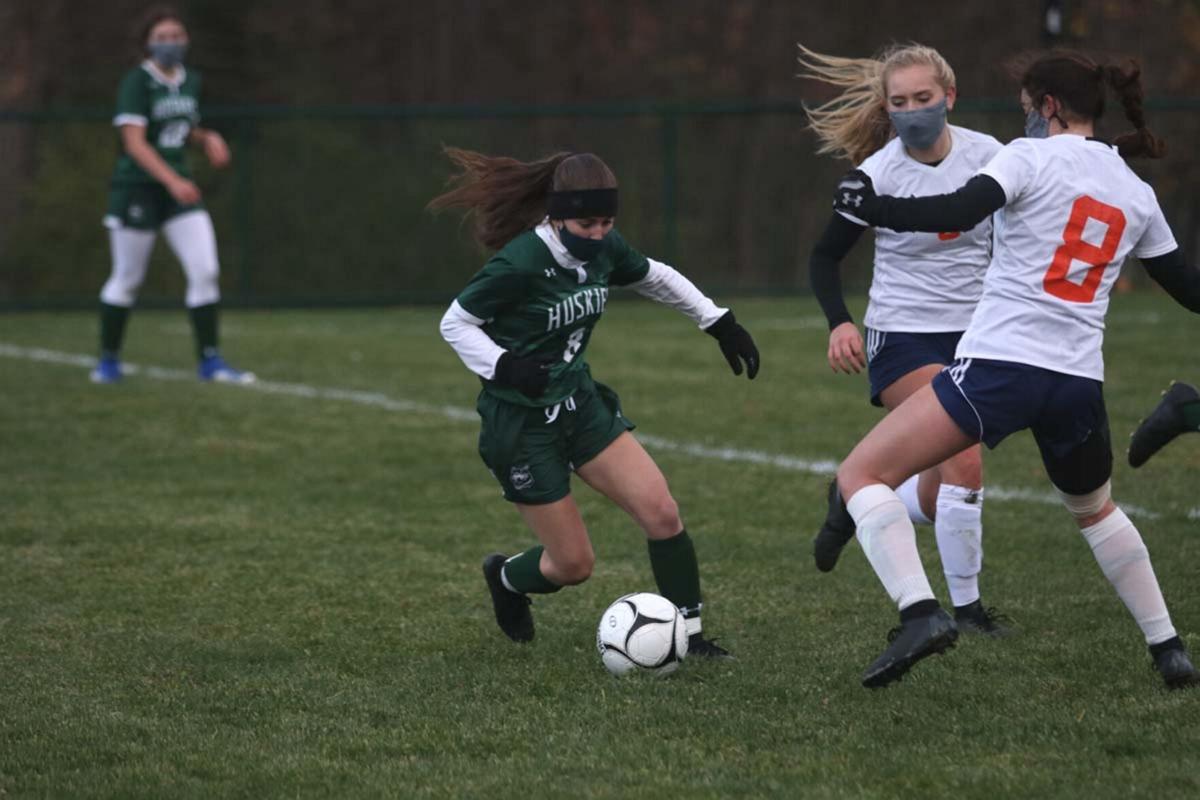 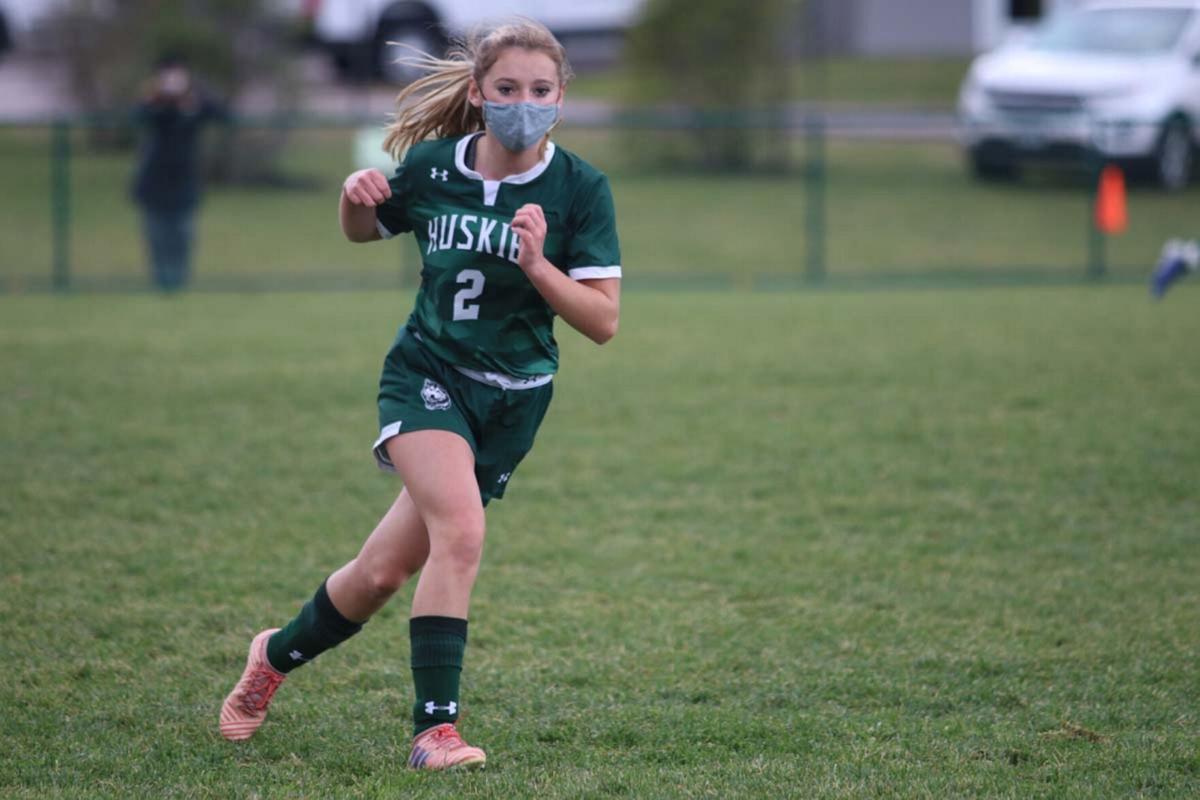 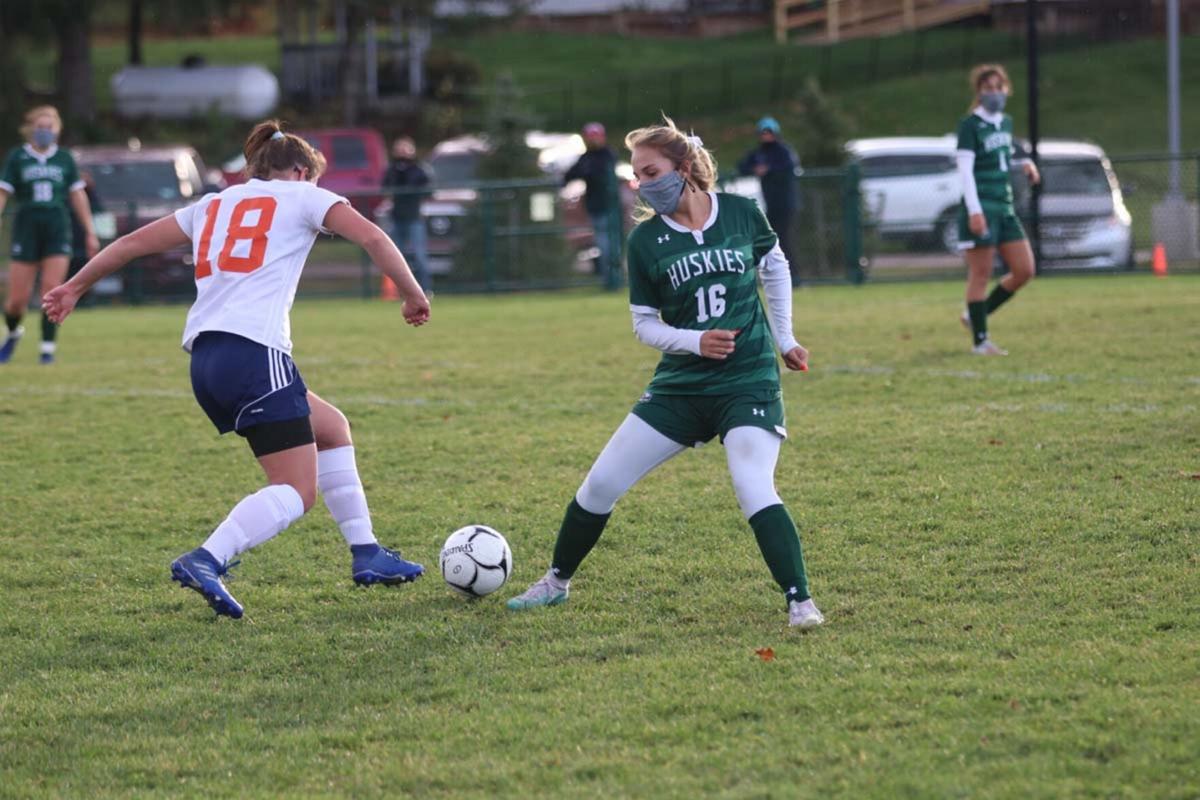 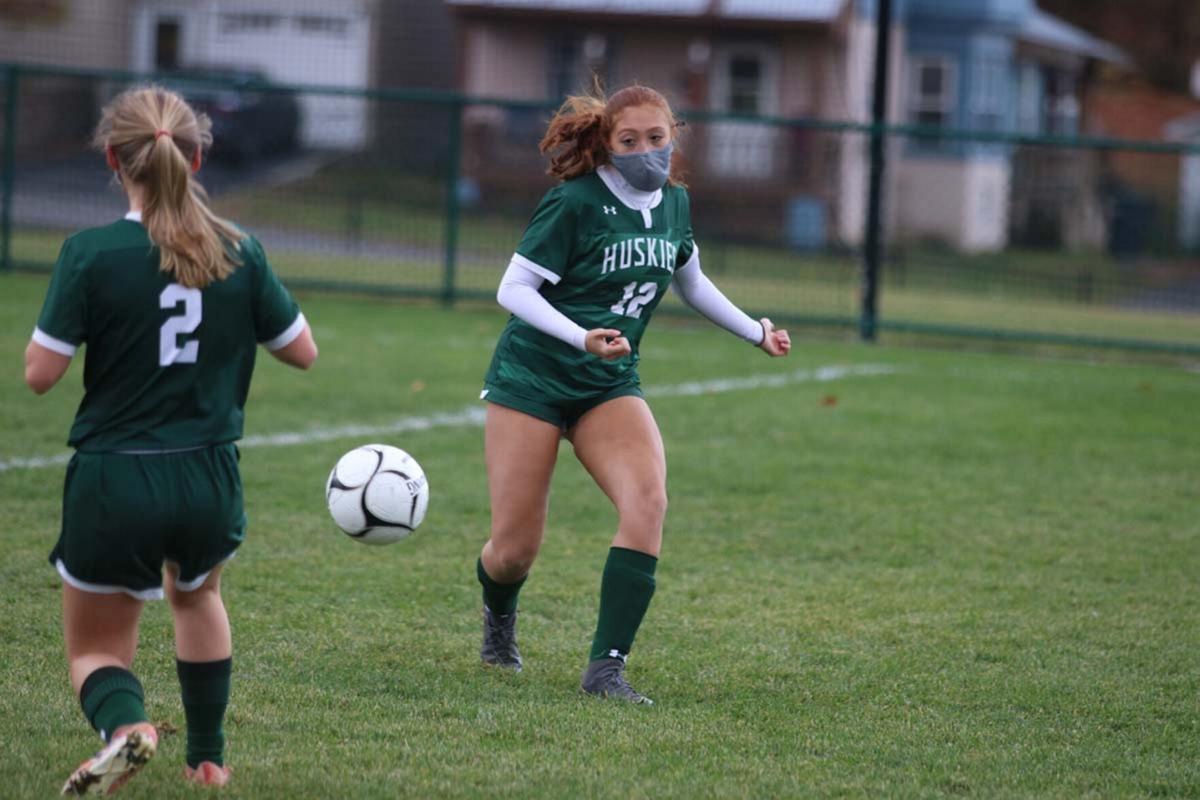 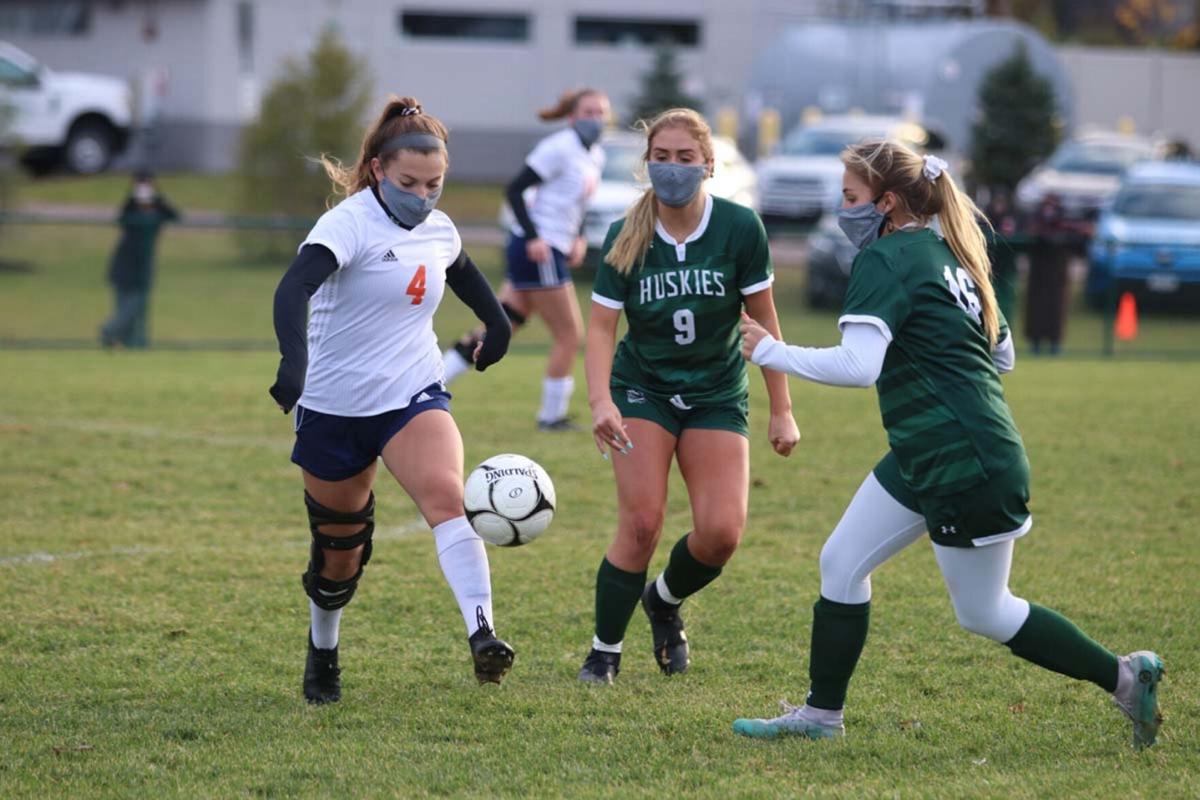 The Huskies began crafting a comeback in the second half that ultimately fell short. Evan Wheaton/Malone Telegram 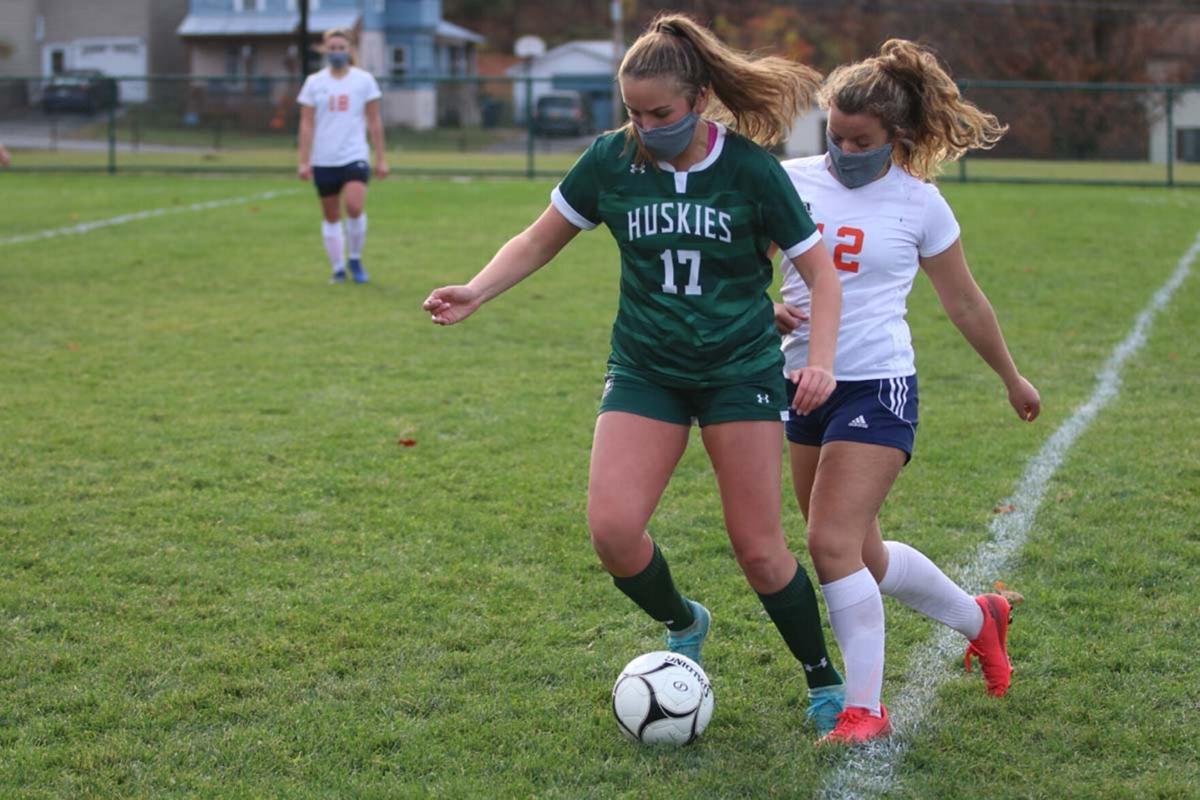 The Huskies began crafting a comeback in the second half that ultimately fell short. Evan Wheaton/Malone Telegram

MALONE – Madison Ansari and Taylor Covey took charge of the Franklin Academy girls soccer team when the Huskies found themselves down 2-0 against Potsdam at the half.

After registering four saves at the net, Ansari went out on the offensive while Covey played the final 40 minutes at goal.

The adjustment gave life to Franklin Academy’s efforts, though the Huskies fell to the Sandstoners 2-1 at home Wednesday.

“We had a few adjustments,” Franklin Academy coach Terry Collins said. “We had a few injuries, so we’ve had to adjust and learning the new people that came on and where their strengths and weaknesses are. But I think the second half we played much better.”

The Huskies are without Brooke Pritchard and Julia Perras due to injuries, so the program has been shifting roles to make things work.

The two seniors aren’t new to adapting to different positions, as they’ve done so throughout their high school varsity careers. After halftime, it was another day at the office.

“I think I communicate well and I brought more communication to the field,” Ansari said. “Taylor did great in goal so that helped us as well.”

Covey finished with eight saves and didn’t let up a goal as she encountered 15 shots in the second frame. Ansari faced seven shots and took command of the offense afterward.

“I don’t think they can hear me that well from the goal, so being on the field helps a lot,” Ansari said with a laugh.

32’— Quite a series. Ansari makes a save on a direct kick. She then tips another shot over the net. Potsdam then makes a corner kick that goes out of bounds. pic.twitter.com/swDqe8vx8z

Potsdam’s Kennedy Emerson and Katharine Cowen netted the two goals in the 15th and 22nd minutes respectively. Emerson had a great look from Cowen with hers, while Cowen sent a shot from roughly 30 yards out that was placed just over Ansari’s reach below the crossbar.

Franklin Academy wasn’t without its offensive looks in the first frame.

Ryleigh McCauley made some shots and was a force at midfield, stealing and driving balls into the offensive zone. But the forwards became too enclosed to make use of the space around them, leaving the Sandstoners back line plenty of room to counter.

“They started spacing out more and adjusting and working better together,” Collins said on Franklin Academy’s halftime adjustments.

Ansari helped with situational awareness on the field while Covey locked it down at the net. As the Huskies’ offense began to take shape, McCauley attacked the box in the 48th minute. The Potsdam back line collapsed on her as she made a pass on the outside to Madison Klepfer.

Klepfer poked the ball in to cut the deficit in half, leaving much time on the clock to make a comeback.

“It was good. I think we were able to move the ball around more on the field helped us a lot,” Ansari said.

Both offenses had momentum shifts all throughout, though Franklin Academy’s communication, spacing and execution were a far cry in the first frame from what the Huskies were able to accomplish in the second.

“Being able to spread out the field and passing more helped us both, but our middies pushed farther up and I think that’s what left the gap for them to get at the ball,” Ansari said.

In the end, Franklin Academy’s comeback came just short. The silver lining for the Huskies is their ability to adapt.

“Potsdam is a good team,” Collins said. “I think they definitely dominated play in the first half.”

Franklin Academy boys soccer had quite a different narrative against Potsdam on the road.

The Huskies routed the Sandstoners 6-0 behind a hat trick from Trent King. Hans Schumacher netted two goals himself, and Evan Miller made the final score of the night.