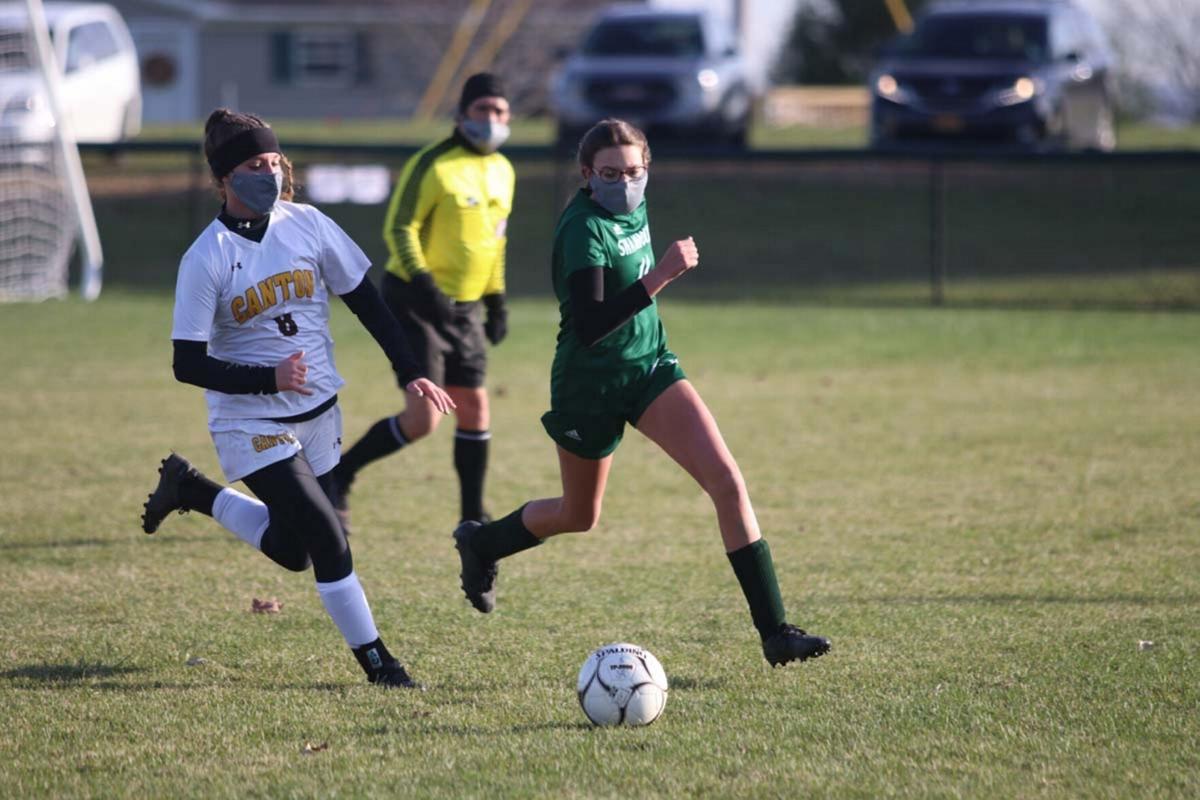 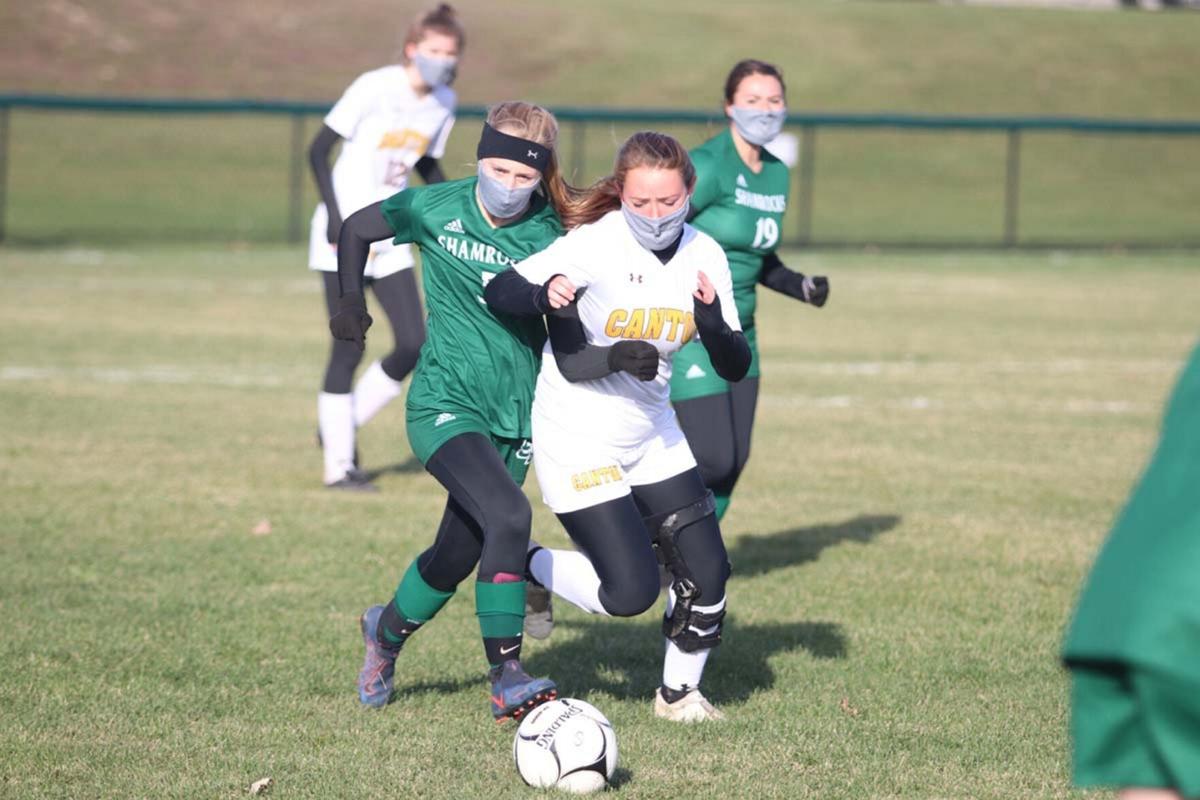 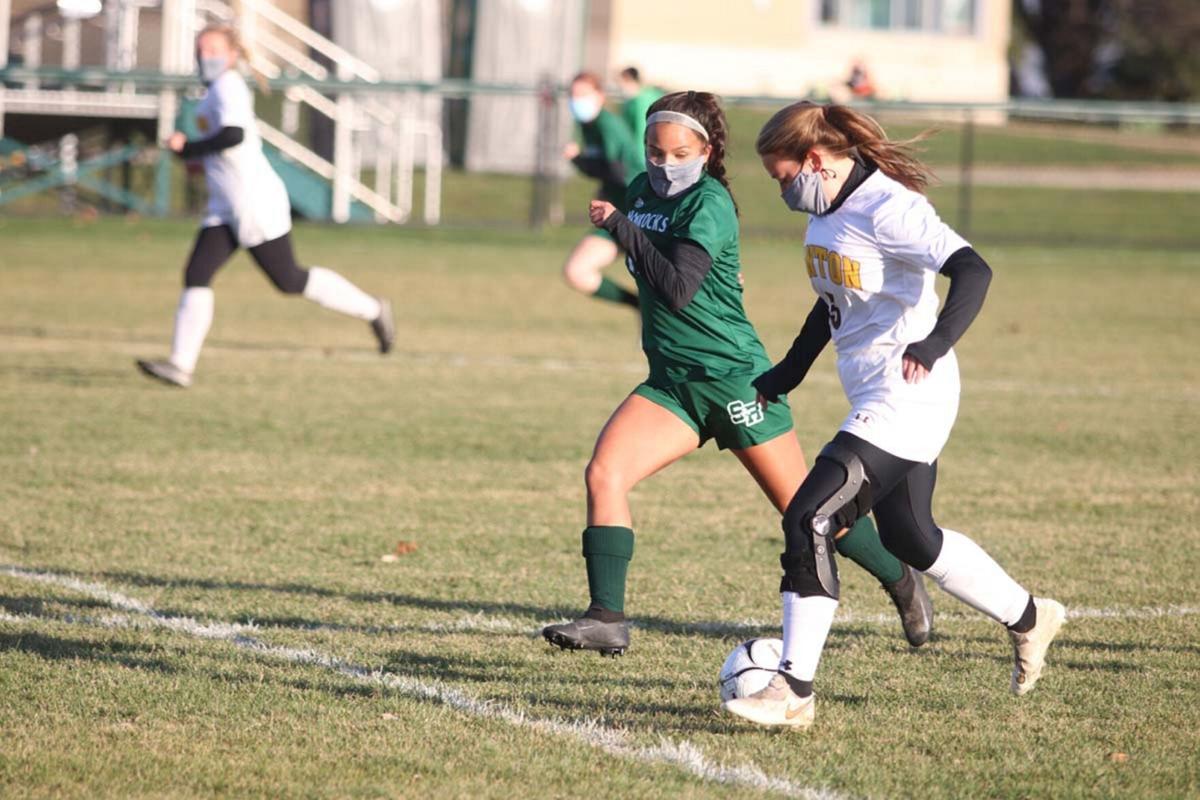 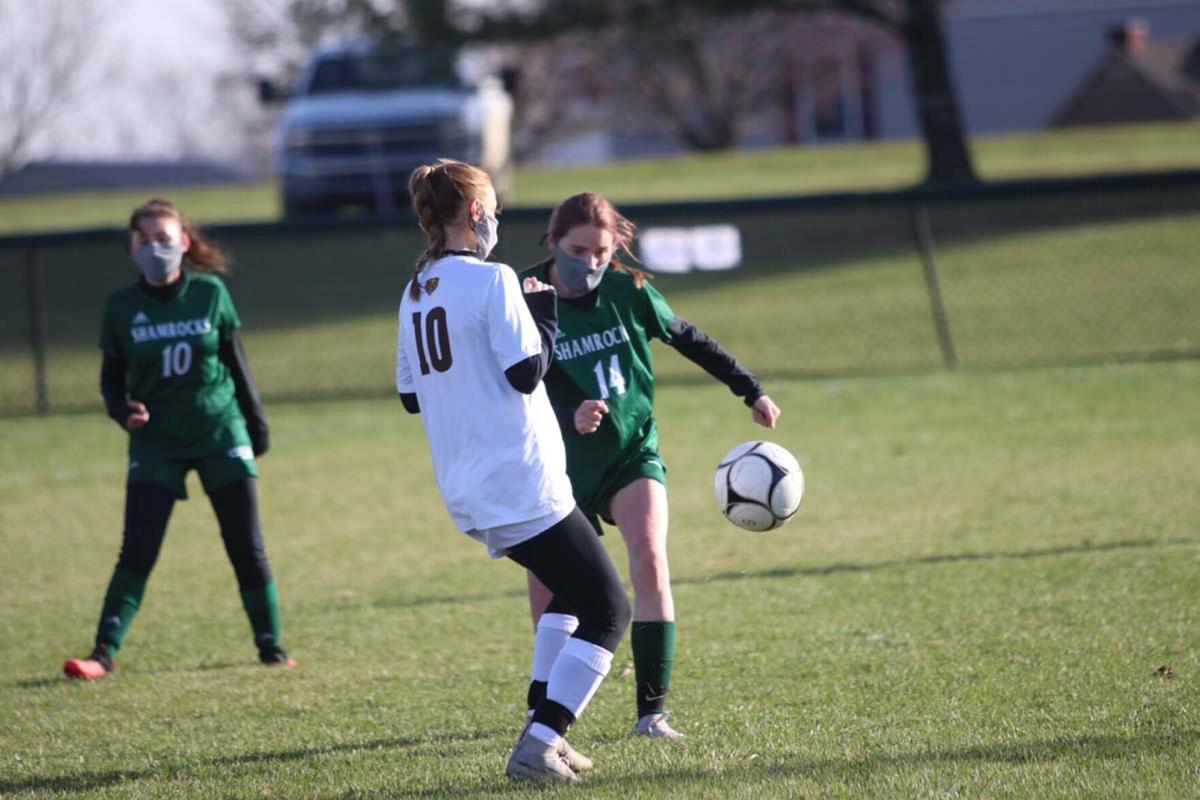 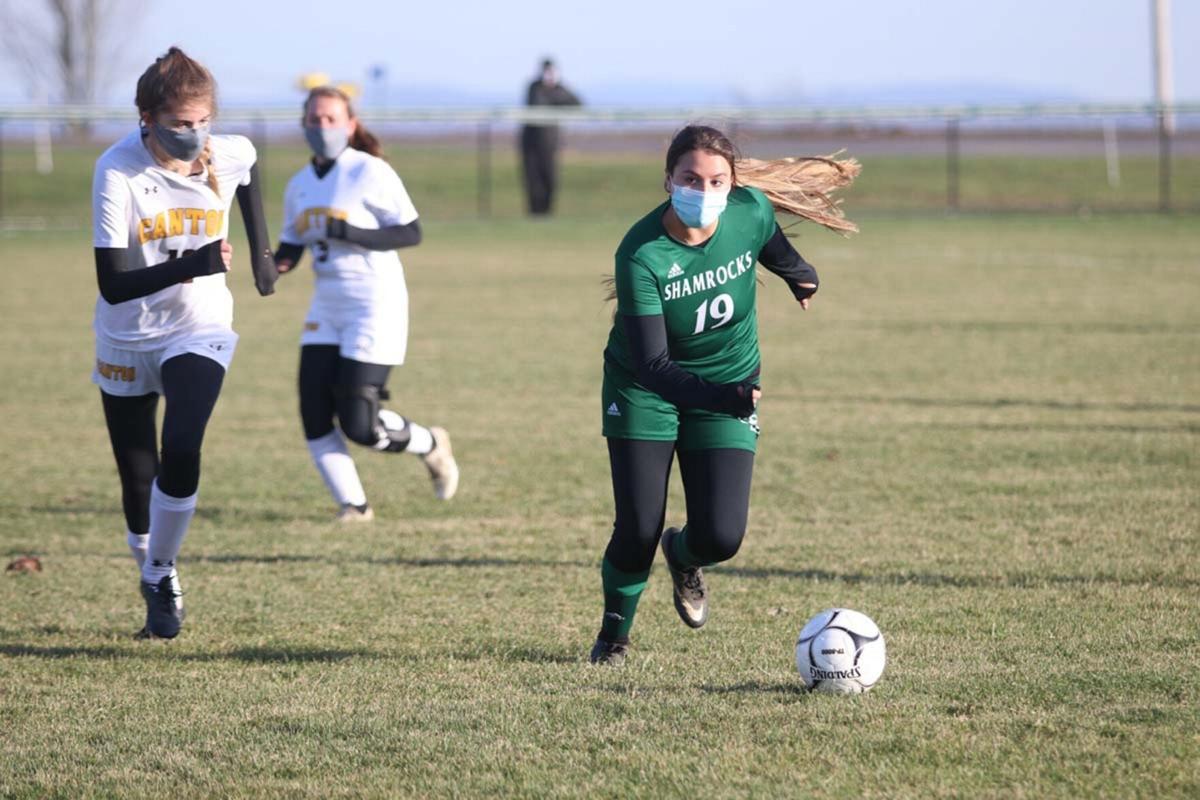 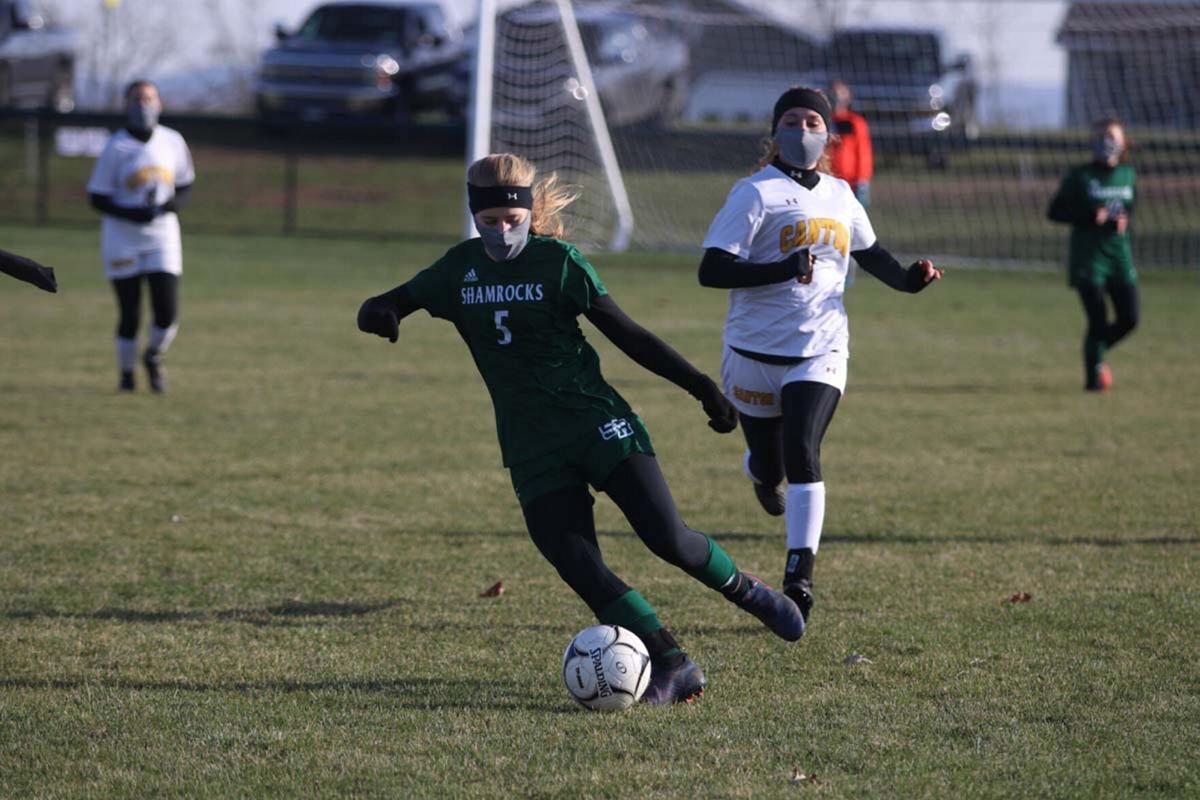 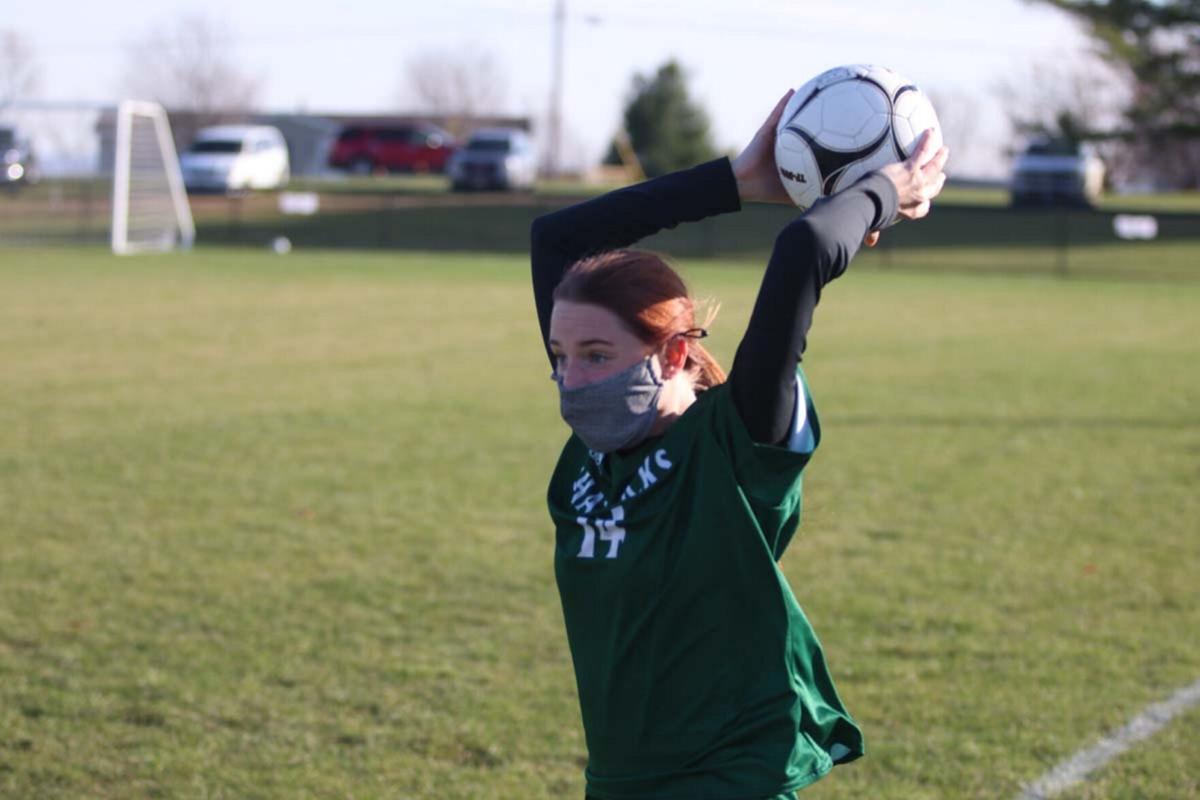 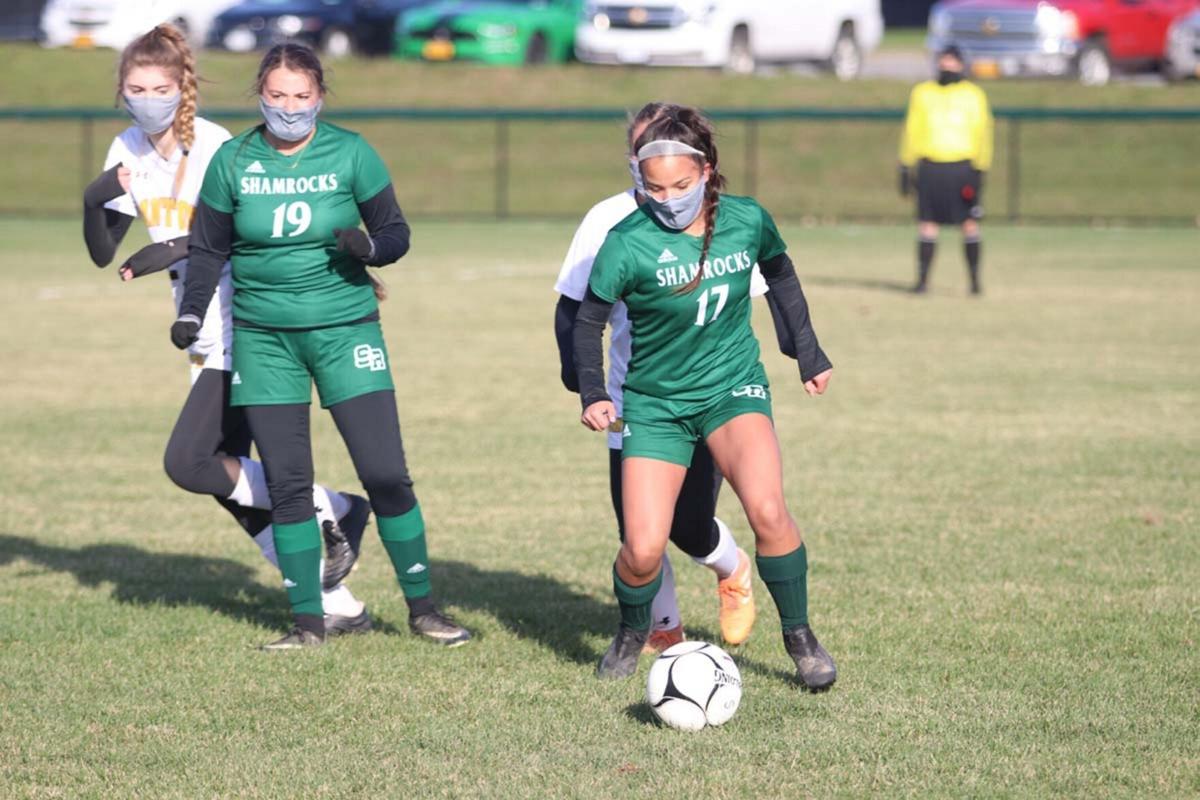 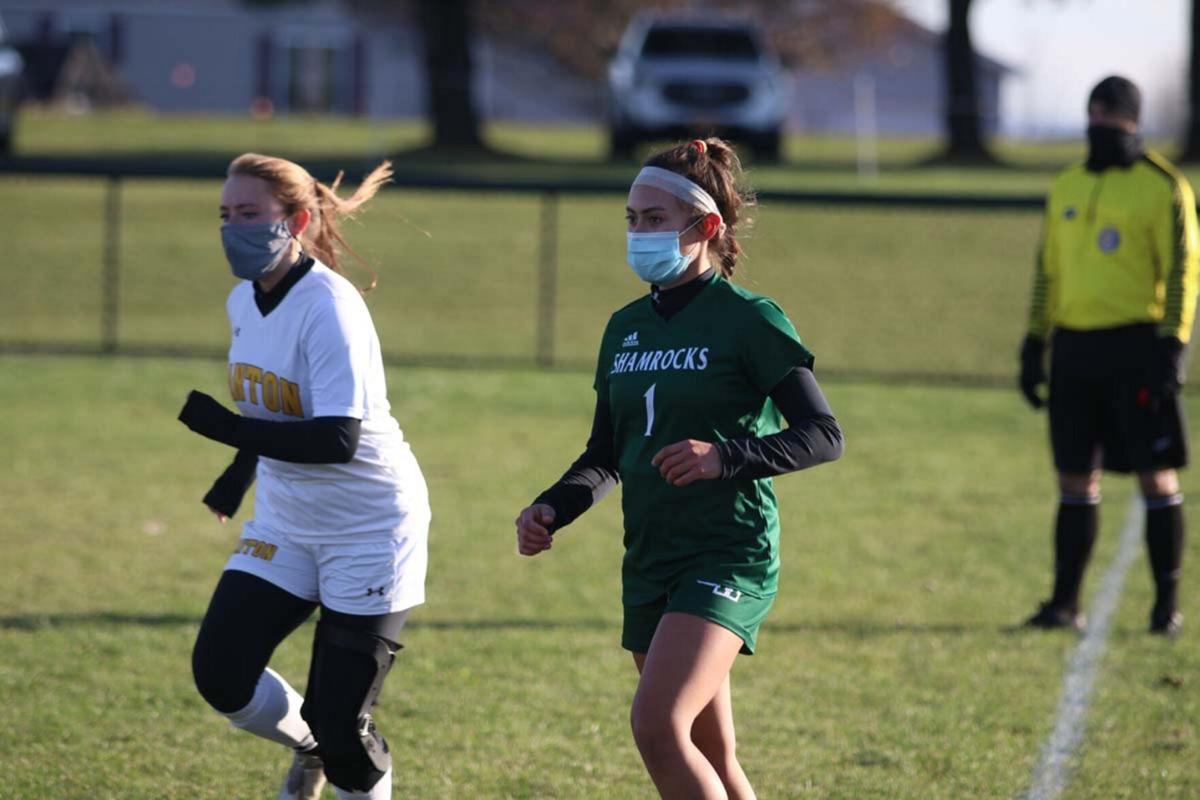 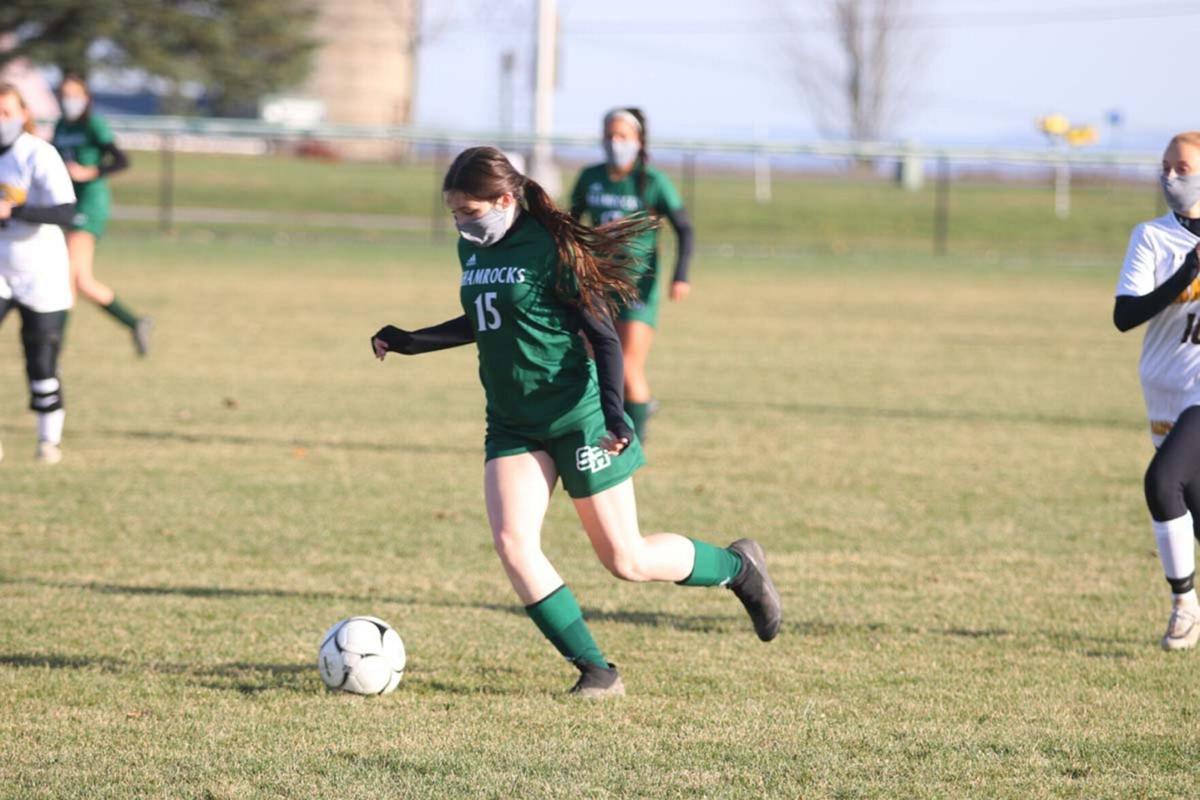 Makenna Manson in motion to make a pass over midfield. Evan Wheaton/Malone Telegram 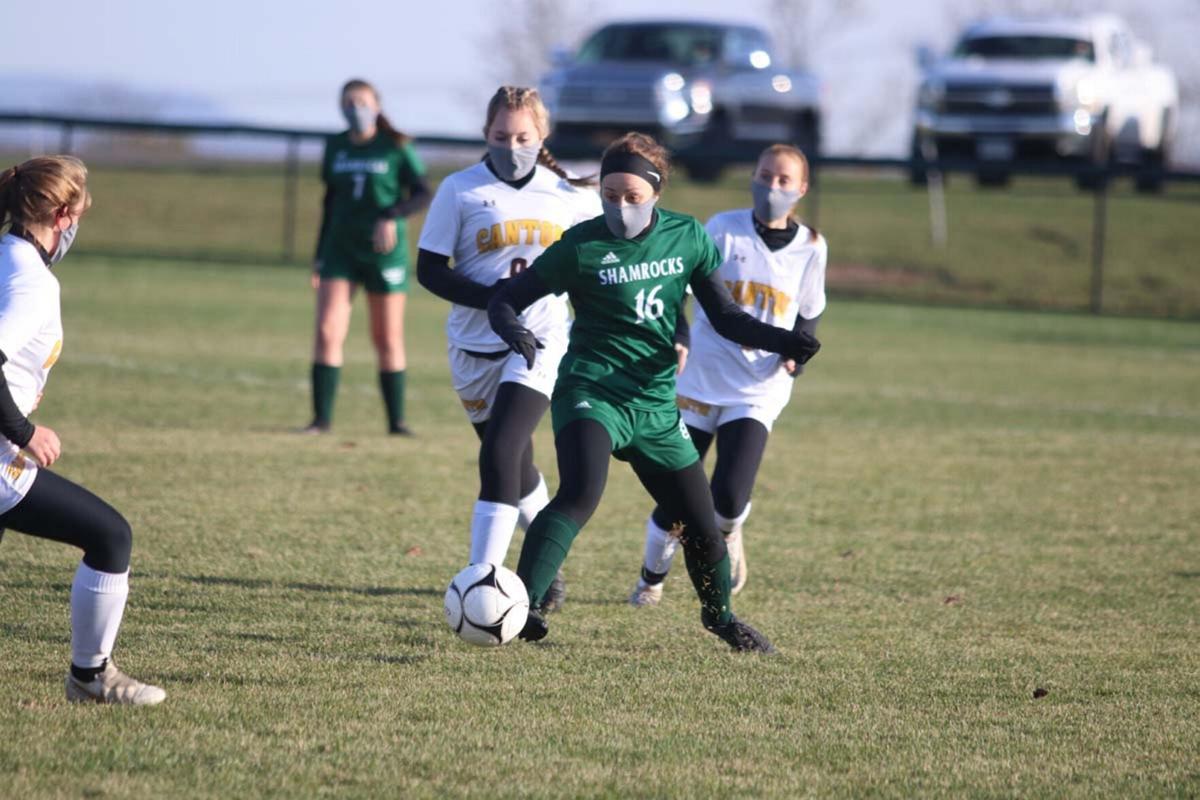 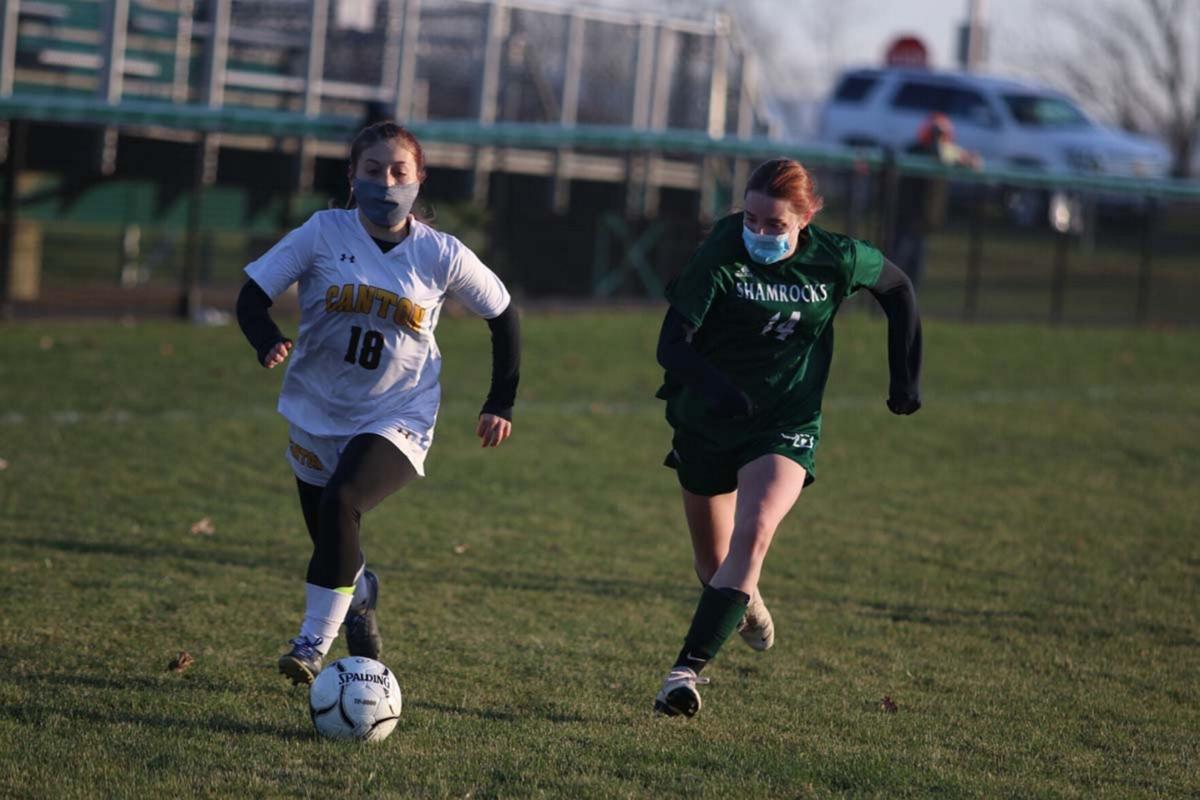 Makhia Snyder in a footrace down the wing. Evan Wheaton/Malone Telegram 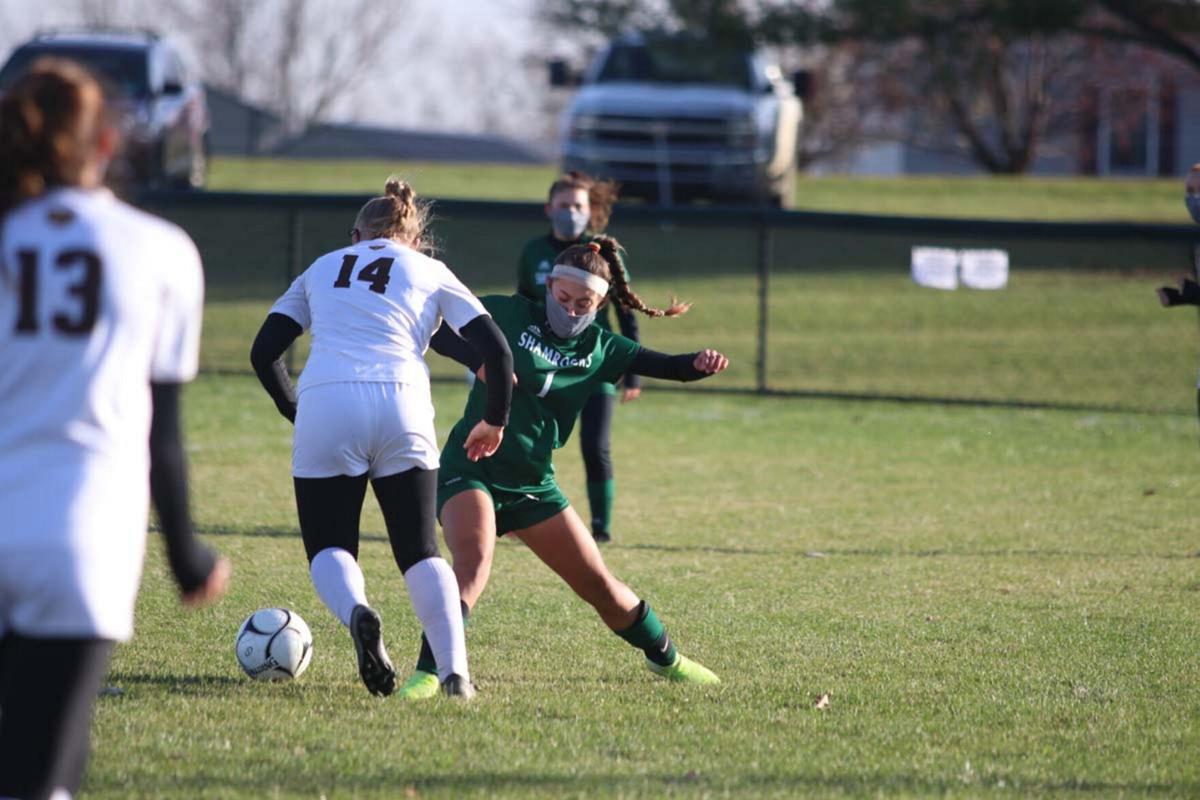 Makenna Manson in motion to make a pass over midfield. Evan Wheaton/Malone Telegram

Makhia Snyder in a footrace down the wing. Evan Wheaton/Malone Telegram

FORT COVINGTON — The new norm for high school soccer games so far in the abbreviated season has been the mask breaks.

Both teams typically get one around roughly the 20-minute mark in each half, but that wasn’t the case during the Salmon River girls soccer matchup against Canton on Friday.

The sole mask break was taken with 19:28 remaining.

“We didn’t have the conversation of we should or shouldn’t (have a mask break) and so we just carried on,” Shamrocks coach Elizabeth Durfee said. “That’s all, so we just had a conversation at halftime and that was it.”

Salmon River has come a long way with practicing and playing while wearing masks since the beginning of the abbreviated season.

Since the initial days of conditioning with face coverings, the Shamrocks have adapted to playing at a high level with masks, and that was illustrated in the 2-0 loss at home to the Golden Bears.

“They’re just used to it. They really are, they just understand that it has to be a part of the game and they just move on,” Durfee said. “They do appreciate having the breather, changing the masks when they get wet. So, overall, I think they’re doing well with them.”

Salmon River came out guns blazing for much of the first half. The back line cleared the ball often whenever Canton forwards pushed toward the net. The midfielders also passed in stride while forwards had a multitude of good looks on the wing.

“I just think the girls came out ready to go. They had some fire and they wanted it,” Durfee said. “They showed a ton of effort, they really wanted to make sure they were taking care of the ball.”

And for the most part, they were.

The Golden Bears found their first goal off a pass from the outside by Claire Craig to Hannah Reed for a quick poke-in during the 30th minute. Reed scored once again with five minutes left in the game off a good look from Sydnee Francis.

Despite the scoreboard, Salmon River found success in the ground game, winning first touches and creating offensive drives in transition.

“I really complimented them on winning the fifty-fifty ball, the punts, the goal kicks – any longer services,” Durfee said. “I thought they were getting a first touch, and a challenge it’s always been to get the first touch and make it a playable second touch. And whether it’s continuing with our offense or countering very quickly on them.”

65’— Golden Bears are getting a lot of corners. Most of the kicks are going wide left, but Sunday came up big on this one. pic.twitter.com/grzliUXLel

Canton compiled three corner kicks late in the second half within a short burst of time. The first and third sailed wide left, but the second was well-defended by Brycelan Sunday (12 saves) at the net.

“Canton’s always been very prominent on the corner so they look for it. We’re fortunate that we hustled back and got in great position,” Durfee said. “That’s something they jumped us on in the first game; we were kind of walking back. But this game we took that time to make sure we were in position and our hips were out, and fortunately they didn’t capitalize on any of them.”

It goes back to conditioning with the masks.

Salmon River is moving more efficiently with the face coverings than they did in the beginning of the abbreviated season. Getting first touches and winning the 50-50 balls, catching passes in stride and winning possession battles at midfield are a testament to the repetition of playing and practicing with masks while having quick turnarounds of games.

Even defending corner kicks exemplifies the fundamentals through the first 60 minutes without a mask break.

“The big thing is making sure our hips as defenders are facing out. You don’t want it to go in the goal, so it’s obviously better to go over the end line,” Durfee said on defending the corners. “But (we’re) just making sure our hips are positioned out so that one the touch it deflects on the sideline or up the field.”

“We came out of the gates quick again today and were able to tuck some goals away early. We passed the ball very well today and were able to control the tempo of the game,” Bulldogs coach Jason LaPlante said. “Again we got valuable minutes from everyone today. Really happy with how we played today. Now we have a quick turnaround to be ready for tomorrow. We have to be ready to play against a great Parishville program. It’s going to be a battle for sure.”

Franklin Academy boys soccer downed Massena, 5-2. The Huskies entered the half with a 4-0 lead, but the Red Raiders gained momentum in the second frame.

“(We) had them shut out 4-0 in the first, but a couple errors gave them some life, but finished it off for a pretty strong win,” Franklin Academy boys soccer coach Chris Yaw said. “Another good team win, rotated everyone through. Hans (Schumacher), Simon Dumas, Owen Eells and Ben Monette had very strong games for us.”