Sign Up
Log In
Purchase a Subscription
You are the owner of this article.
Edit Article Add New Article
You have permission to edit this article.
Edit
Home
News
Sports
Obituaries
Local Living
Society
Opinion
Calendar
Archives
Ads
More
Share This
1 of 6 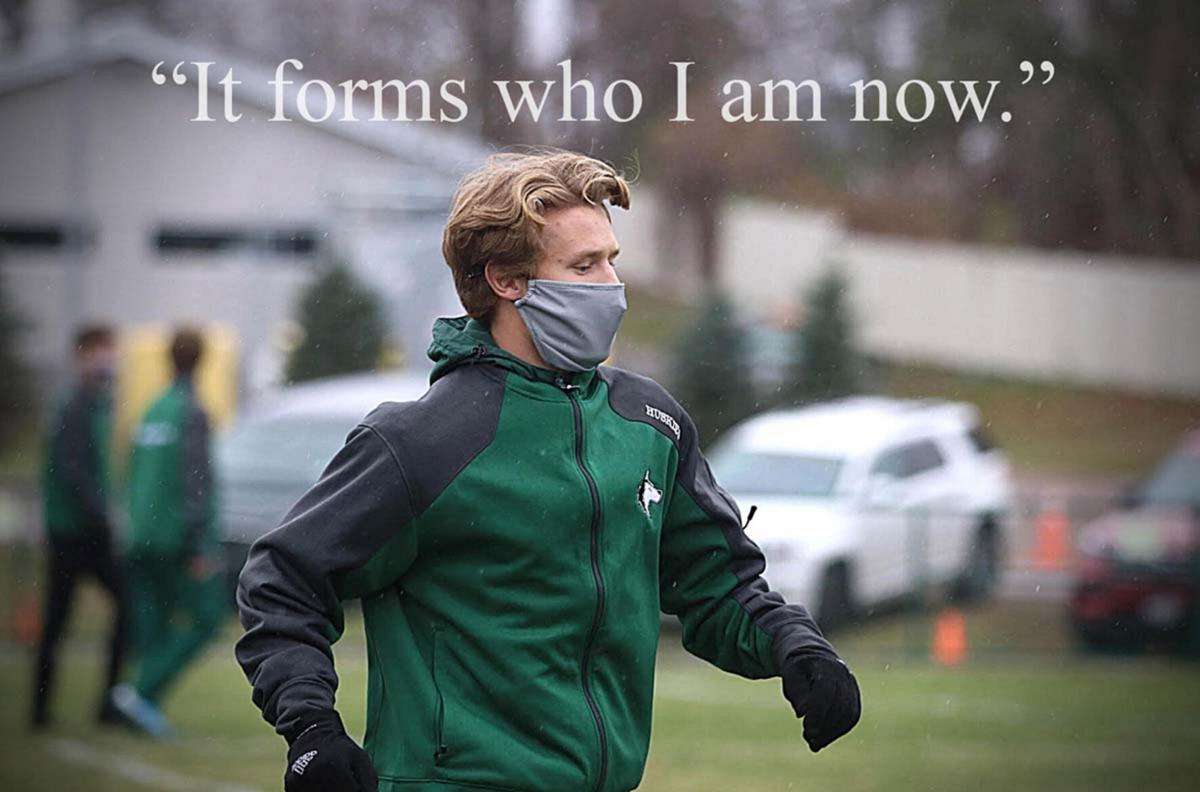 Hans Schumacher taking the field for warmups before a game against Potsdam. Evan Wheaton/Malone Telegram 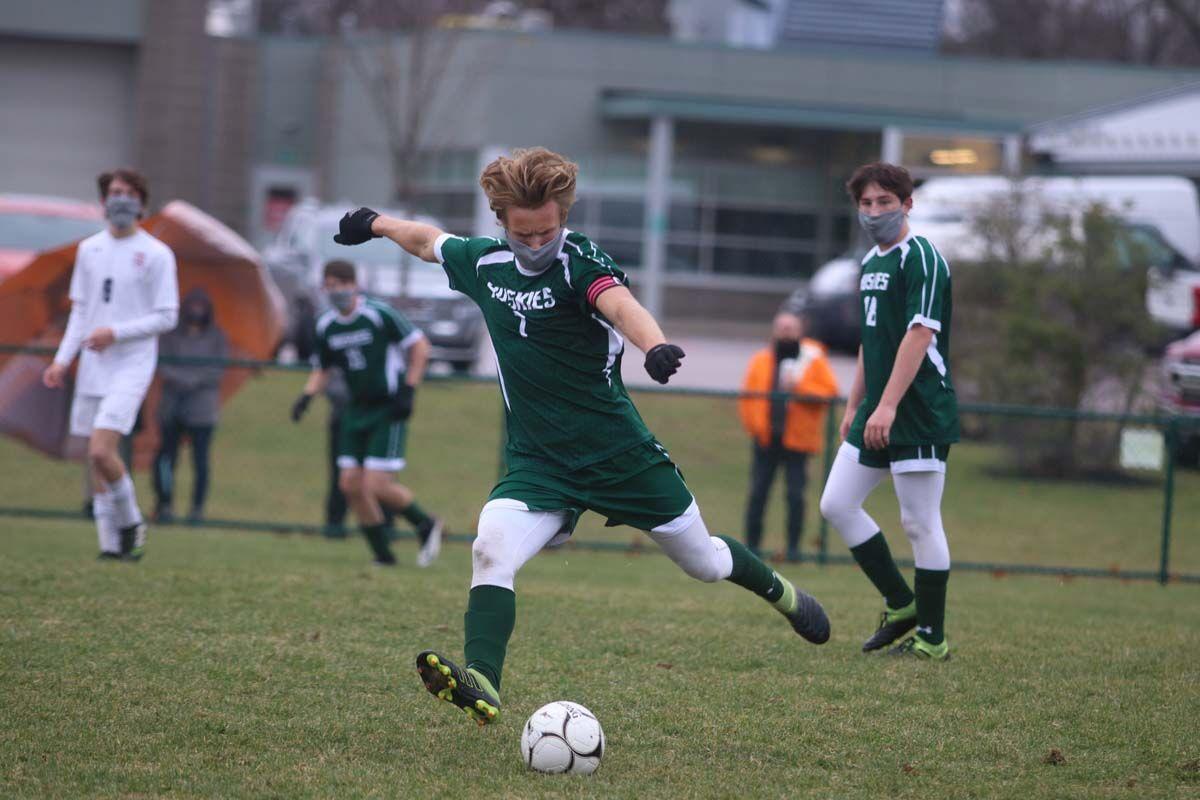 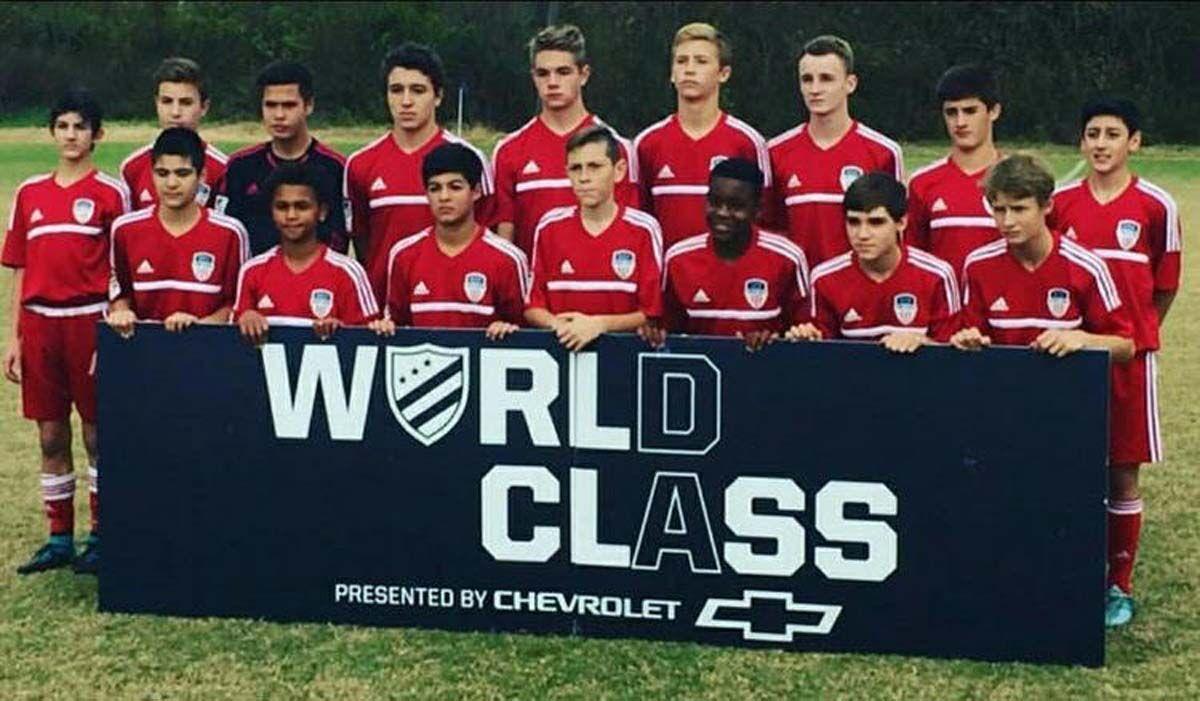 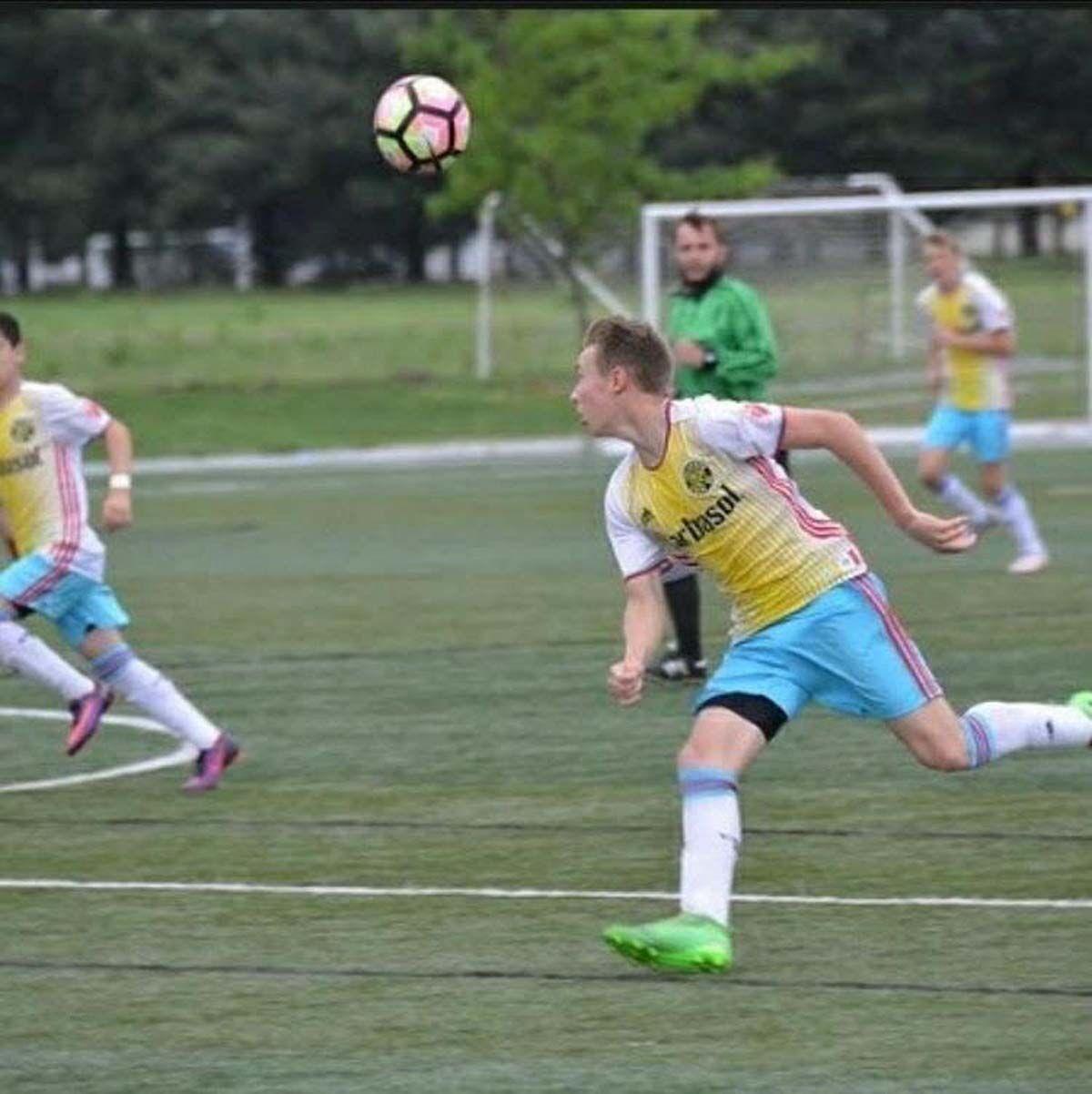 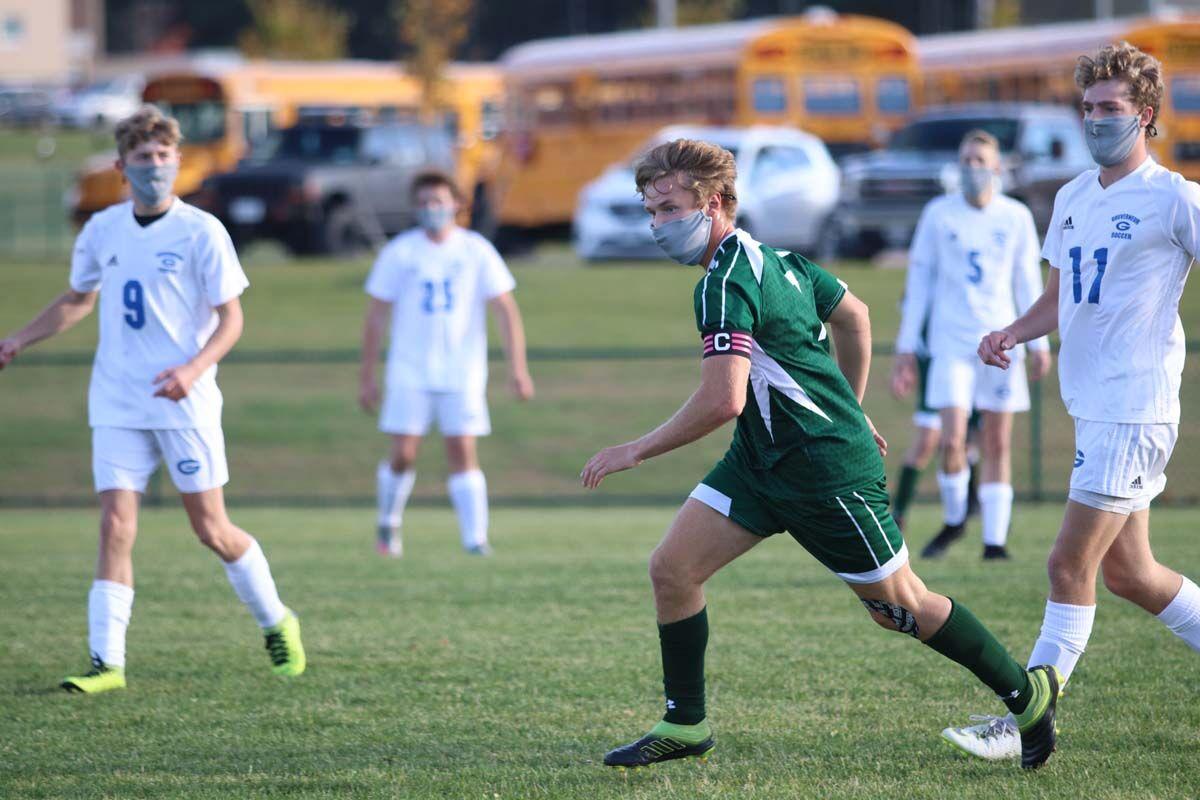 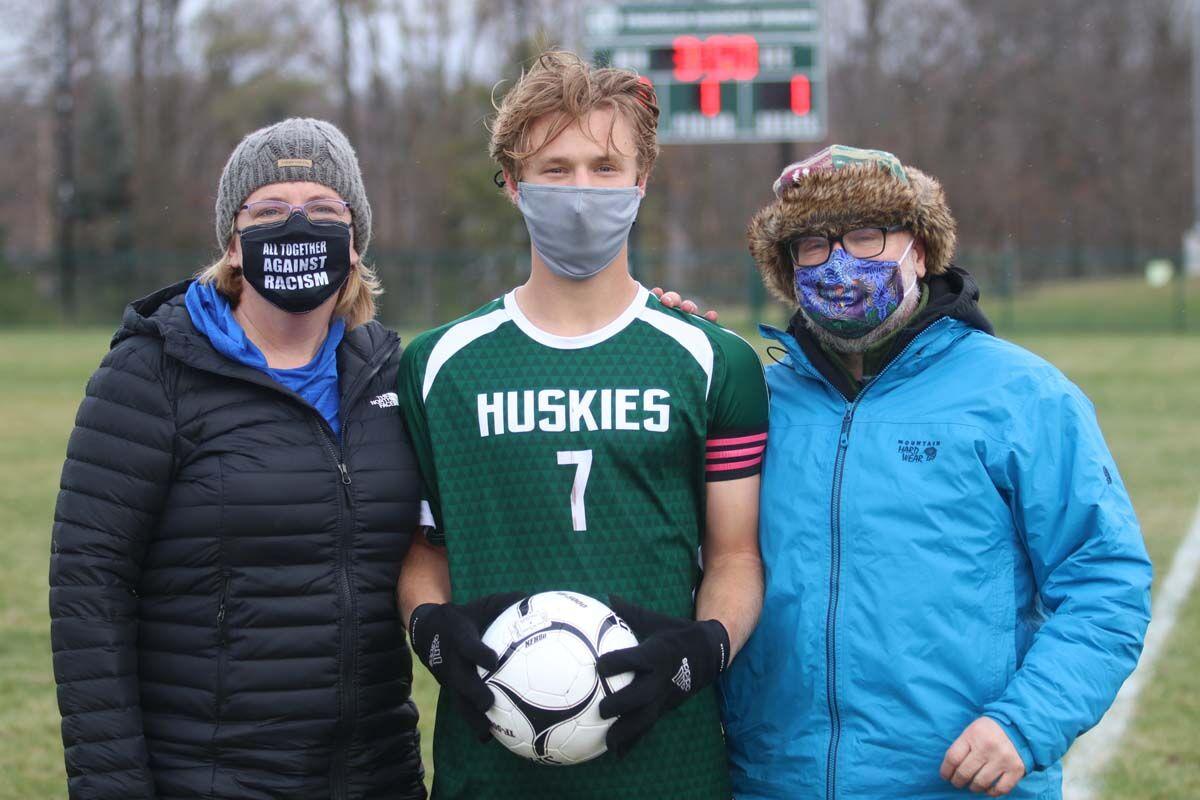 Hans Schumacher (center) with his parents. Schumacher is holding the game ball he scored his record-setting 65th goal with at Franklin Academy. Evan Wheaton/Malone Telegram

MALONE — There are six wooden boards nailed together.

They form a hexagon, laying on its side in Hans Shumacher’s backyard, where he’d spend hours in the center of it. His legs a blur, rocketing a soccer ball around the dirt. Bouncing, banging off the wood.

“I had to really buckle down and train,” he said.

Schumacher would try to hit every panel as fast as he could. Speed, dexterity, precision — he had to work on these things alone. He couldn’t make all the practices four and a half hours away in Rochester, N.Y. where he played for the Empire United Soccer Academy.

He didn’t have one. White paint and black tape on the side of Schumacher’s horse barn made a decent target. Nothing too special or fancy, but for 12 years, this was the workstation.

“His determination and commitment to becoming a better soccer player for me is the biggest thing,” Franklin Academy soccer coach Chris Yaw said.

Much of his craft was mastered in that hexagon. It developed him, sheltered him like a birdhouse. When it came to running through drills at high school varsity practices, Schumacher was just fine-tuning things a little more.

Yaw has been watching Schumacher’s development ever since he played with Calista, Yaw’s daughter, when they were very young.

“To be able to do the things that he does, it’s not something you get by being coached by Chris Yaw, or anybody,” Yaw said. “You get it by years and years and hours of repetition and practice and commitment to improvement.”

For all the time Schumacher spent contained in that enclosed space working on his game, he also found opportunities to do so far and wide outside the wood.

The 18-year-old has played in a bevy of states now through youth development travel teams and camps, but now he’ll do so in another country entirely.

After the COVID-19 pandemic gripped the United States in March, the NCAA created dead periods where athletes couldn’t communicate with coaches. At the time, Schumacher was in talks with Syracuse, Villanova, the University at Albany, UVM and several D-III schools, but couldn’t close the deal.

Instead, Schumacher finds himself heading to Borea Dresden, an international soccer academy in the German state of Saxony. From a young age, he always had the determination to enhance his game.

“The only thing motivating me was the prospect of going pro,” Schumacher said.

And while he’s certainly on his way, that motivation was with him on those travel teams. With him in that wooden hexagon blasting boards until the sun sank.

“I really felt like pro was the bottom line for me,” Schumacher said. “Anything other than that would be a disappointment.”

Like the motion of Schumacher’s legs in the hexagon, the ball as it ricochets from board to board. Like Boreas, the Greek god of the north wind.

Schumacher had a tenure with the New York Red Bulls’ youth program from fifth to seventh grade.They never let up a goal and always won by 10-15 goals.

“We were disgusting,” Schumacher said.

He was too young at the time to live away from home, but flew from the nest to play with the Columbus Crew’s youth team in Ohio the following year.

Staying with his nana in Portsmouth, she drove him two hours, three days a week, every other day to MAPFRE Stadium for practice, and on weekends for games.

“She was pretty clutch for actually signing onto that, especially given her older age,” Schumacher said.

The Crew would pile into the bus and embark on long road trips to various states – Chicago, Minnesota – to play.

And more often than not, Schumacher had an unfamiliar feeling, losing almost every match.

“The experience was not the same as the Red Bulls,” he said.

With just three goals, Schumacher was the leading scorer for the Crew. He was also put off socially as a self-described liberal living in a heavily conservative area.

Day after day. Night after night.

“The sparkle of the whole situation kind of dialed down a month in,” he said.

Upon his return to Malone, that pro dream was in tatters. Schumacher didn’t play club soccer that following freshman year of high school – the only year of his life he didn’t take part.

“I just thought that it was all over for me with club soccer. I’m not going pro,” Schumacher said. “I almost felt defeated.”

After his stints with the MLS, Schumacher was spending the occasional afternoon at ID camps at UVM from 8 a.m. to 3 p.m., once every two to three months. He already had prior experience in Vermont playing for the Far Post Soccer Club.

There was no aim, no purpose. The pro dream already fizzled out. Schumacher was traveling to the neighboring state for different reasons.

Coaches liked what they saw in Schumacher’s 11-on-11 matches. They knew his game was different. He stood out in the crowd.

The gears shifted toward using soccer to better his education. Schumacher could still use his talent to further himself in some capacity.

Traveling took away that spark, but gave it right back.

“Now what really motivates me,” Schumacher said, “is getting the best education so I can really set myself up for life.”

But his senior campaign was up in the air with COVID-19 gripping the world. When the spring sports season was cancelled, Schumacher was hopeful that humanity would have the virus at bay by then. He carried that optimism as the fall progressed.

“I just had no doubt in my mind we were going to really hammer out most of our season,” Schumacher said.

While other schools switched to remote learning and their athletics ended early – Gouvernuer, Harrisville – Franklin Academy’s third to final scheduled game was its last.

And Schumacher spent it scoring a hat trick in the first half against Potsdam, breaking Franklin Academy’s scoring record of 64 goals.

The Huskies won six straight games, but they were a far cry from the beginning of the abbreviated season in which they dropped two of the first three.

“Our defense needed a little more of a calming presence that we lost last year,” Yaw said.

Schumacher is traditionally a central middie – that’s where he can do the most damage, offensively, defensively and side-to-side.

The idea of him in a central defensive role was floated at the beginning of the year, but Schumacher wasn’t thrilled. He knew the record was within his reach. He was hungry. He wanted it, needed it.

“We revisited it and he was in full agreement,” Yaw said on the personnel change.

The Huskies went from a 4-5-1 scheme to a 4-4-2. Already having two strikers up top, Yaw knew Schumacher would move up and bank his goals with the added firepower at the net when he could.

“The best defense is a good offense,” Yaw said.

Schumacher made the system flexible during play. Sometimes he’d be at midfield, creating a 3-5-2 look. To have such a fluid player in the driver’s seat, to have that ability to mold to whatever his teammates were doing in every phase, it’s not common in high school.

“Not every soccer player at the varsity level has the soccer intelligence that Hans does,” Yaw said.

“I’m losing more than a player after he graduates,” Yaw said.

When opponents see no. 7, they see the threat. They see the danger he presents. But what opponents don’t see is how Schumacher elevates those around him on the field.

How he allows his teammates to soar.

Schumacher is to report at Borea Dresden by Jan. 14. He’s preparing for his next team, his next trip.

Whether it be all over New York State, throughout the Midwest or over seas, traveling has been as much of Schumacher’s development as those countless hours in the backyard.

We tend to grow the most when we’re launched outside our comfort zones. Schumacher has done that time and time again.

The confidence, the skills. Schumacher picked up plenty on the road regarding his prowess on the field. But he gained more beyond the game.

The kid growing up in the North Country has seen the country itself, seen the hustle and bustle of the big cities. Other cultures, different people.

“It gave me a better look at life,” Schumacher said.

From a glorious stint with the Red Bulls, to a less than desirable social situation with the Crew, loss after loss, to a future Hall of Fame career at Franklin Academy and a senior season that was constantly up in the air.

Flying high like his 65th varsity goal – a ball, headed by shaggy golden hair, into the net off a corner kick.

“There are a lot of coaches that are happy to see him go,” Yaw said with a laugh.

With Schumacher, Franklin Academy had two coaches on the field. They had the most prolific scorer, the safety net. They had no. 7.

“Filling his shoes on the field – it’s not going to happen,” Yaw said.

Germany holds more than just the education. That pro dream is alive and well, brought back from the ashes like a phoenix. But there’s no bottom line anymore.

“It can all end right now and I wouldn’t have a single regret,” he said. “I’m just going to keep going.”

Nothing is guaranteed. Schumacher will once again have to find his place. His new surroundings.

But that’s what he’s always done.

This isn’t his first flight.