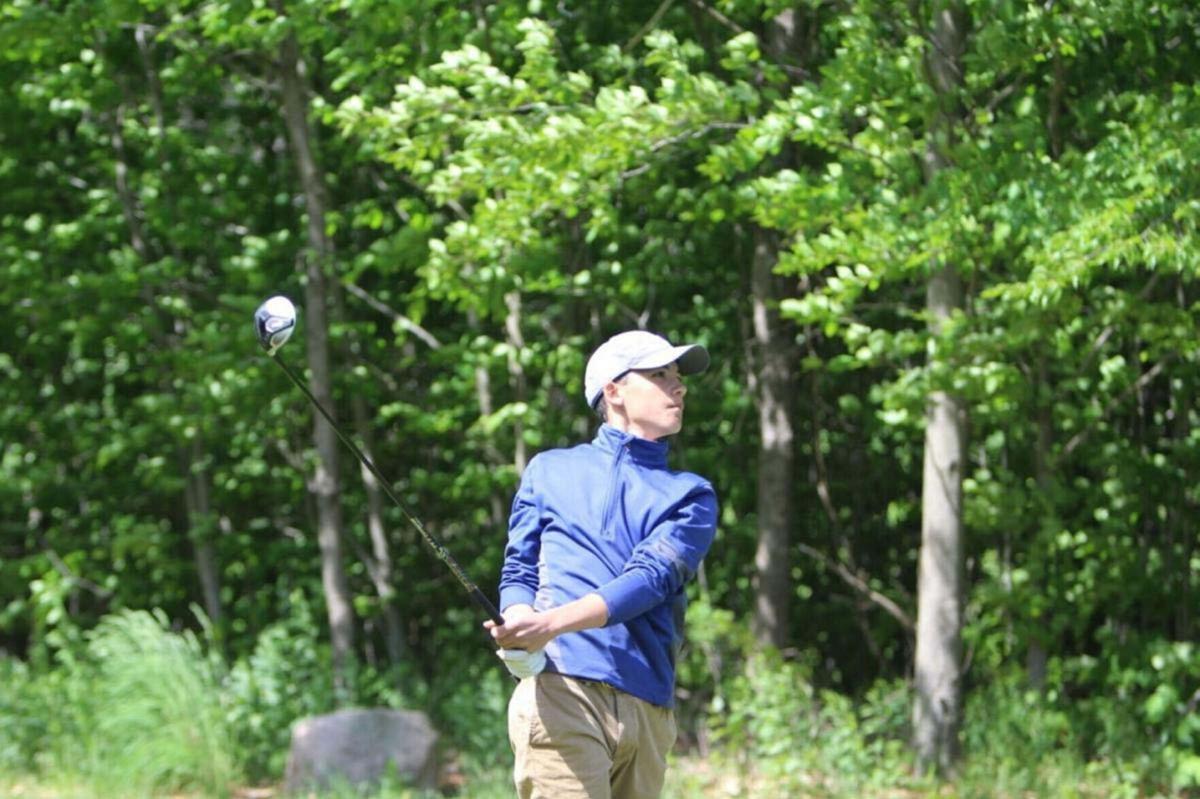 Canton’s Ryan Jones follows through on a tee shot on his way to the Section 10 individual golf championship Saturday. Dave Shae/Journal 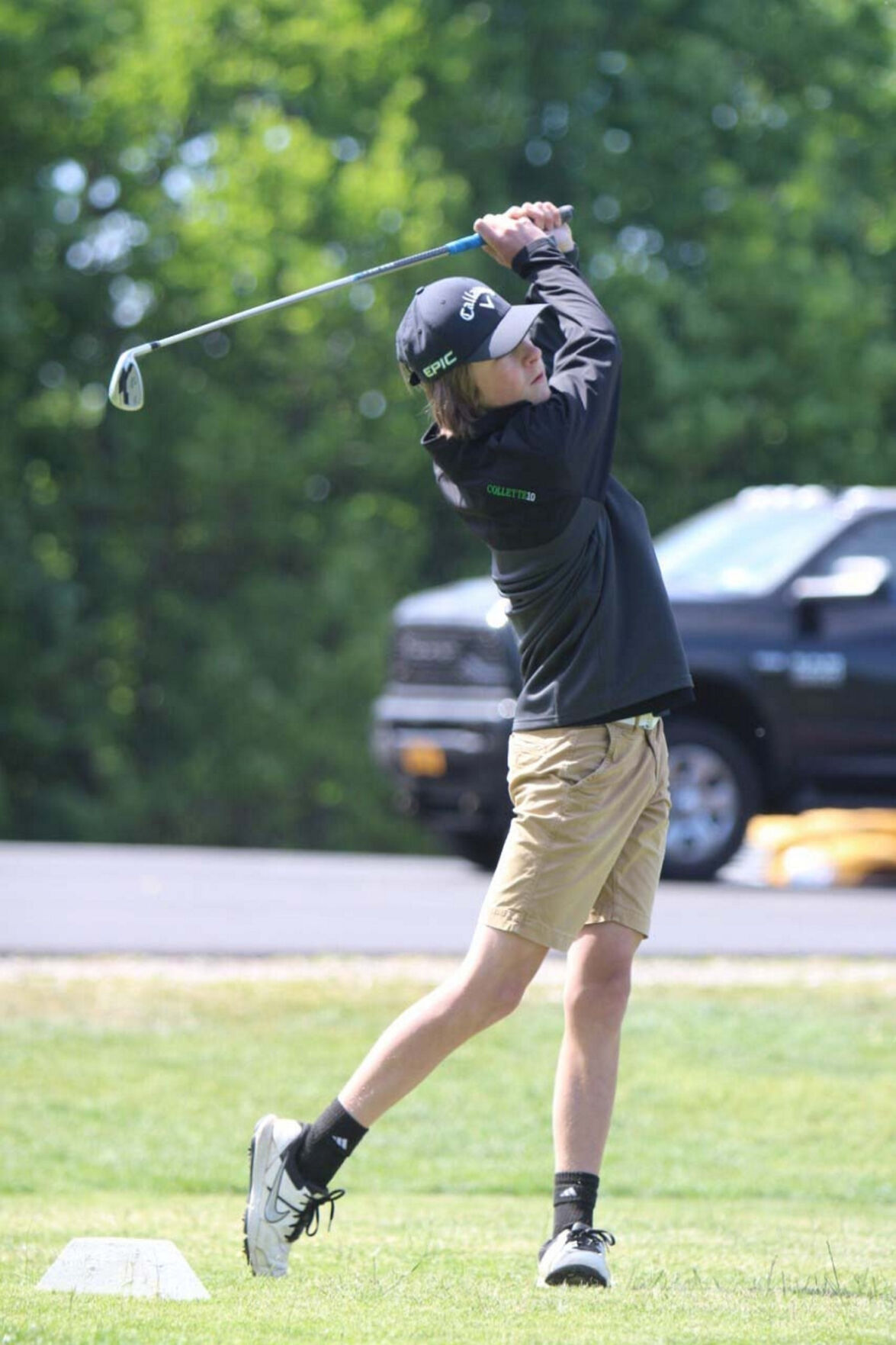 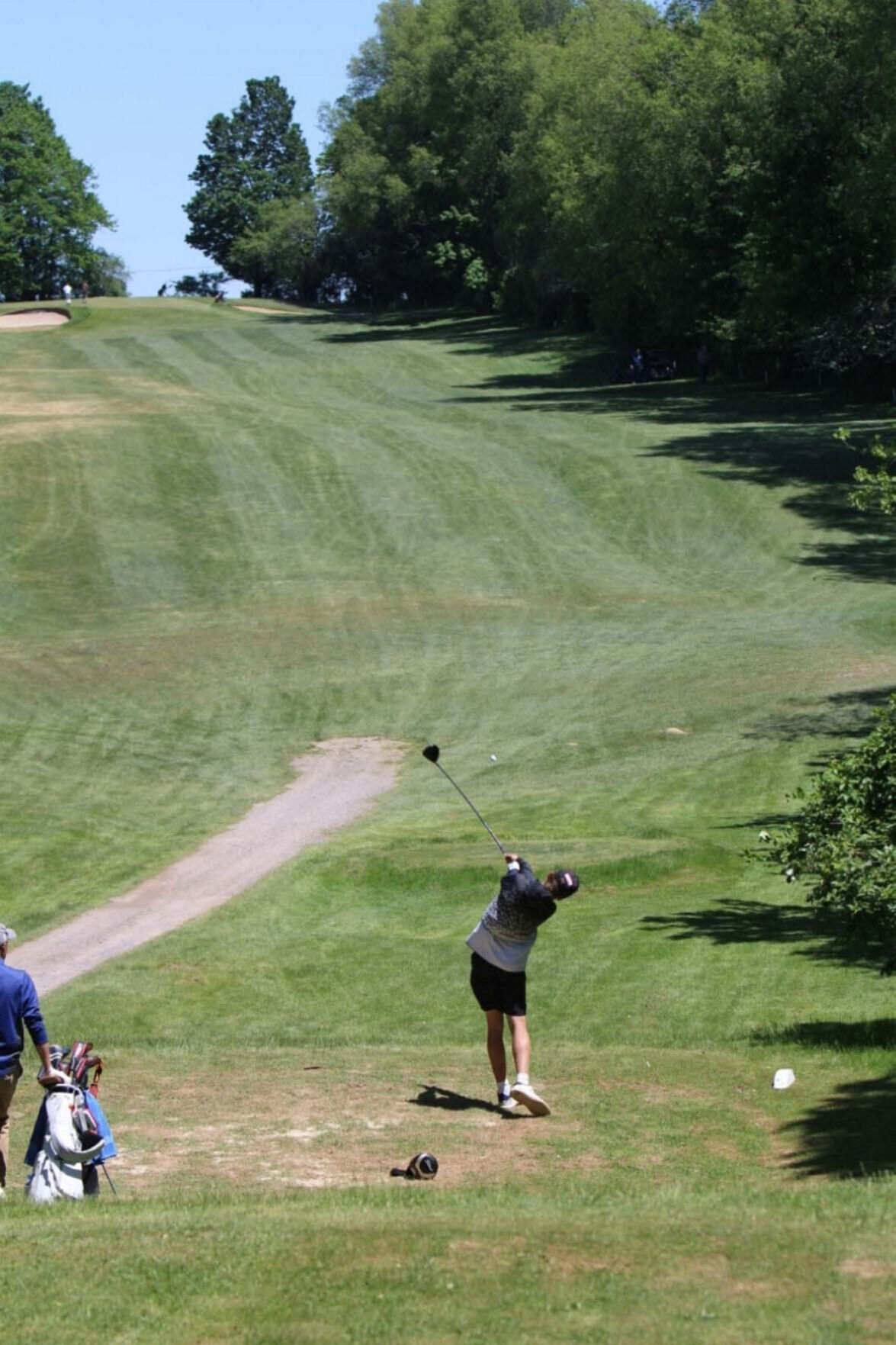 Canton’s Ryan Jones follows through on a tee shot on his way to the Section 10 individual golf championship Saturday. Dave Shae/Journal

POTSDAM — For the second straight day Canton’s Ryan Jones was part of a one-stroke victory, only this time it was his own individual championship.

Jones shot a 10-over-par 82 Saturday at the Potsdam Country Club to win the Section 10 individual championship by one stroke over Gouverneur’s Dylan Farr.

Jones finished with a two-day total of 160 strokes and Farr, who entered round two five strokes back, shot a 78 to finish at 161.

On Friday Jones had the best round of the day, with a 78, and helped Canton edge Massena by one stroke (467-468) as the Golden Bears won their first team title since 1986.

“It feels great,” Jones said. “I’m so glad for the team, too. It was more fun to win the team title than the individual. Our team worked hard. I just had to keep playing my game. Keep playing consistent. There were a lot of tough putts coming in.”

Jones entered the second round with a two-stroke lead over Salmon River’s Evan Collette and a three-shot lead over Massena’s Colin Patterson.

He played in the final group with those two and got off to a strong start while Collette and Patterson struggled.

Jones picked up pars on the first two holes, bogeyed three and four and then made par on five and six. He bogeyed the seventh and eighth holes and then birdied nine to go into the back nine at 10-over-par for the tournament.

“It kept me relaxed,” Jones said of his start. “Those two bogeys hurt, but those pars got me off strong. Then the day went downhill. The wind was strong most of the day, but it didn’t really affect my game. (Bad holes) were my fault.”

By the back nine, the championship chase was down to Jones and Gouverneur’s Farr, who was playing a group ahead. Farr, who plans to play for Clarkson in the fall, shot a two-over-par 38 on the front nine and at the turn trailed Jones by just two strokes.

Jones picked up another birdie on the 10th hole, but then got into trouble.

He bogeyed the 11th hole then suffered a triple-bogey seven on the 12th hole and his lead over Farr was three strokes. A bogey on the 15th hole by Jones cut the lead to two and Farr appeared ready to move into a tie until he ran into trouble on the 16th hole.

Farr wound up three-putting for a double-bogey, falling four shots behind Jones.

“I knew I was pretty close,” Farr said of the tournament. “It’s pretty tough. I knew I needed to play well and try to come back as best I could. (The 16th hole) is what got me. I choked hard there.”

Jones made things exciting as he bogeyed the final two holes, but held on for the one-stroke win after Farr birdied the 18th hole.

Jones comes from a golfing background. His grandfather, Denny, was Canton’s coach for 30 years and his father, Aaron, golfed for Canton, then for NCAA Division I St. Bonaventure. He is now the Madrid-Waddington coach.

“It was fun, but it’s harder than playing the game and it’s harder than coaching the game,” said Aaron Jones of seeing his son play. “It’s hard to watch. He’s keeping his composure and he’s grown a lot over the last two years. He doesn’t explode (after bad holes) like years past. I’m proud of that. He grinded it out. It’s not always easy playing with the lead. Sometimes it’s easier being a few strokes back. He’s a much better player than I ever was at that age.”

There is no state meet this year but Section 10 still honored the nine golfers who would have gone to Cornell for the state tournament. In addition to Jones and Farr, the Section 10 state team consists of Norwood-Norfolk’s Jace Dutch, Canton’s Sam Sieminski, OFA’s Ethan Bouchard, Canton’s John O’Neill, Massena’s Patterson, OFA’s Nick McRoberts and Salmon River’s Collette.