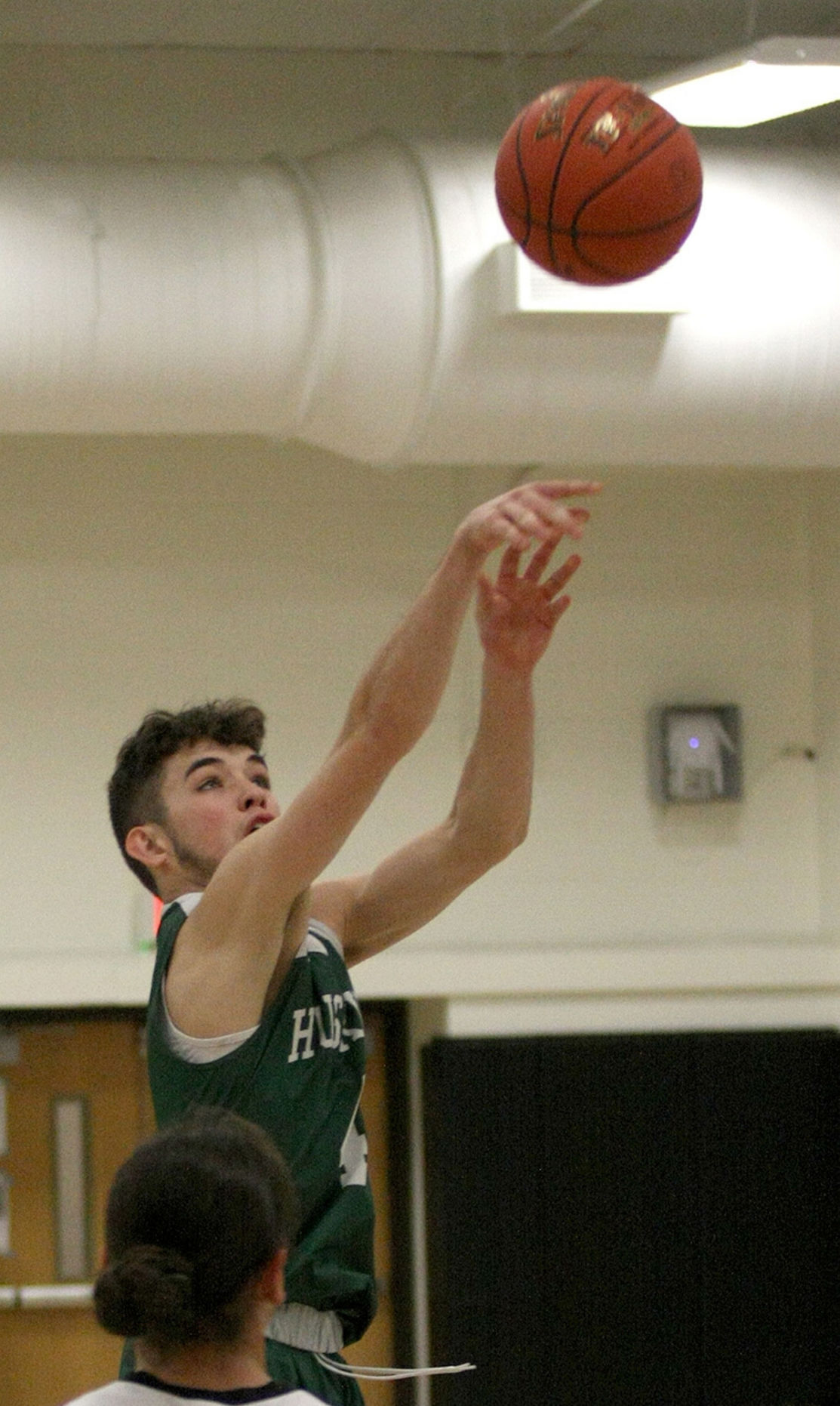 John Gokey, The TelegramFranklin Academy’s Aiden Decillis fires home one of his four three-point baskets during the Huskies’ nine-point road win at Salmon River on Tuesday. 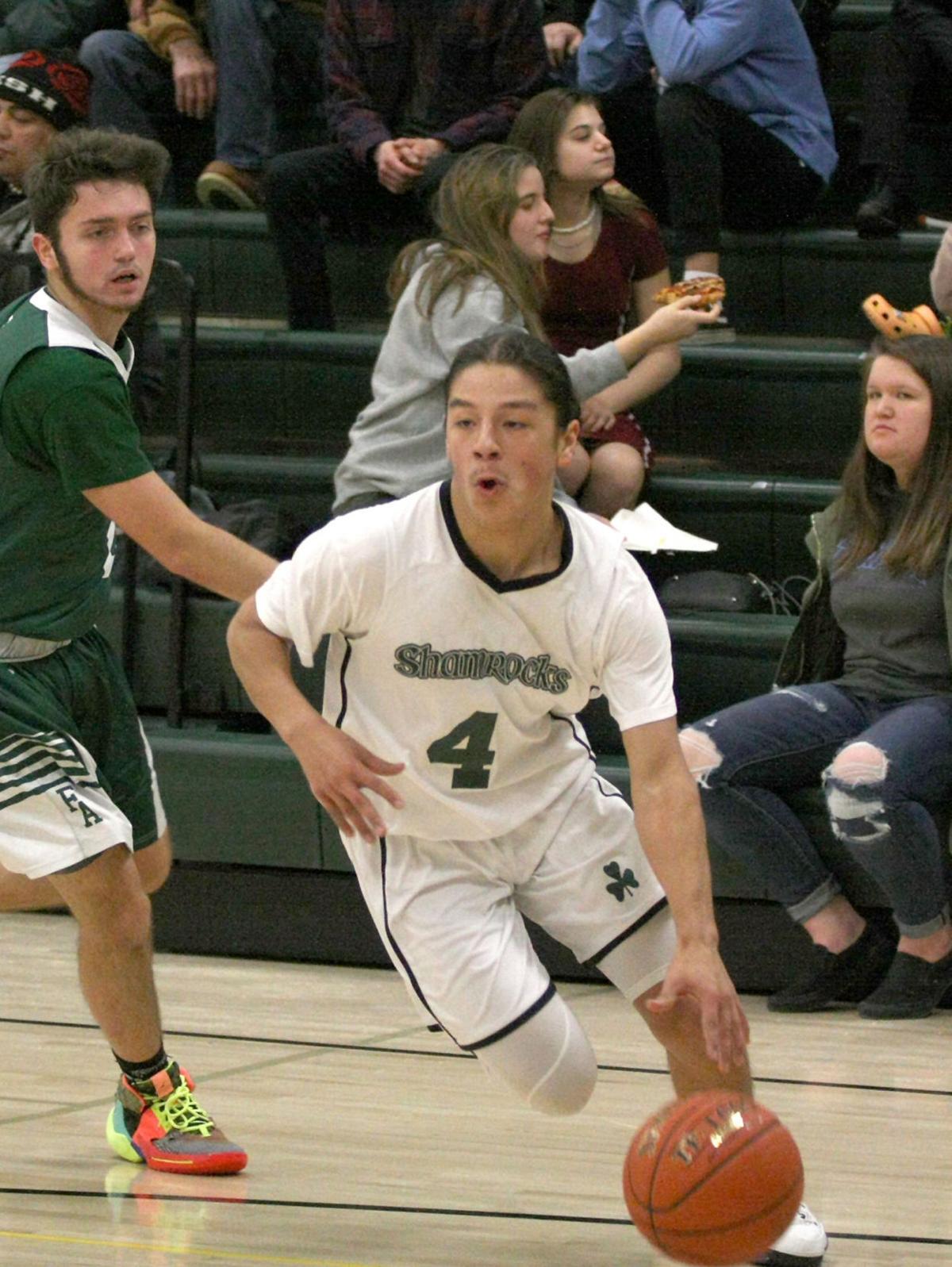 John Gokey, The TelegramSalmon River’s Kyran Skidders drives baseline during the NAC Central Division home game against Franklin Academy on Tuesday. The Shamrocks erased a 22-point deficit during a fourth-quarter run, but fell nine points short in a loss to the Huskies. 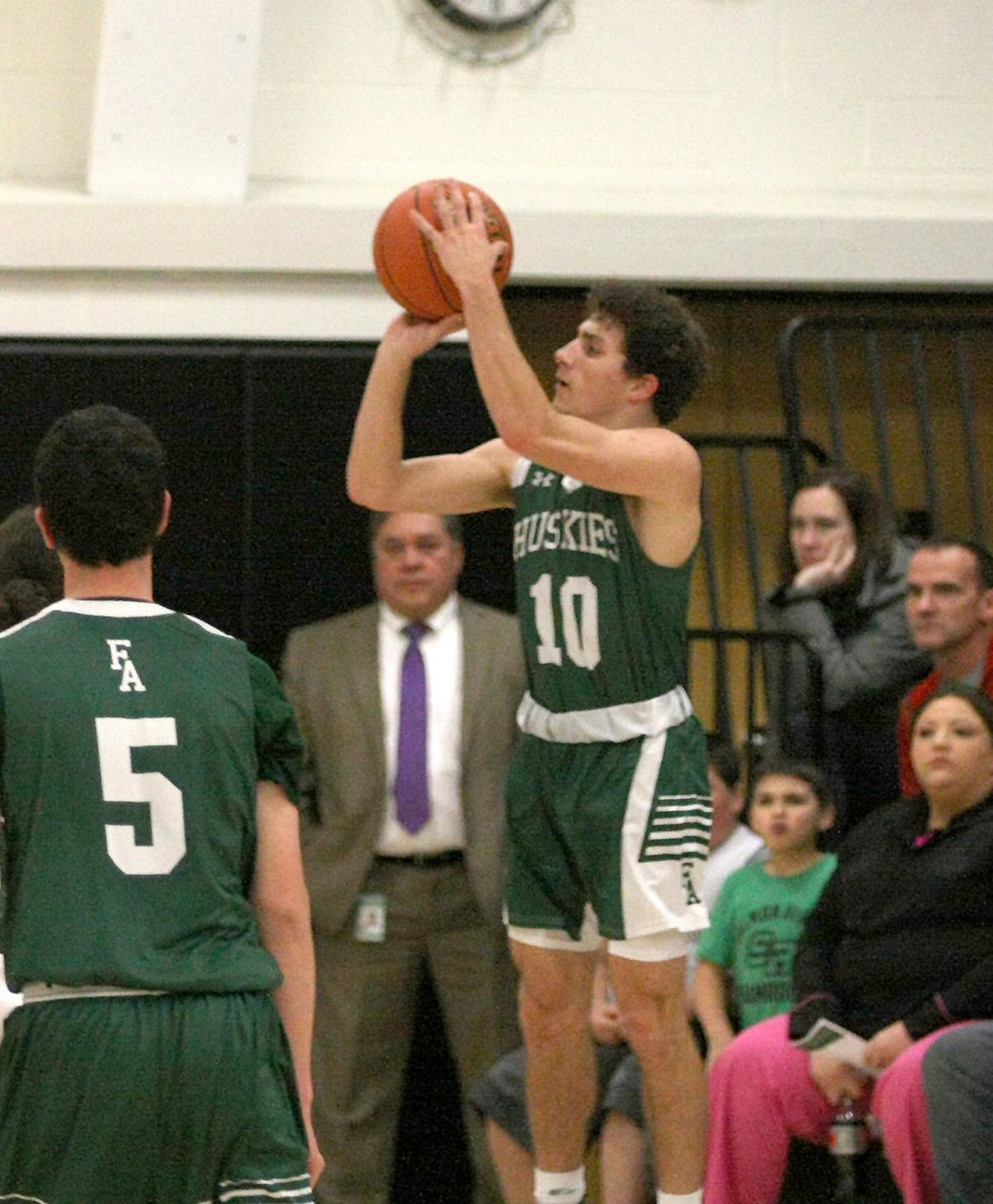 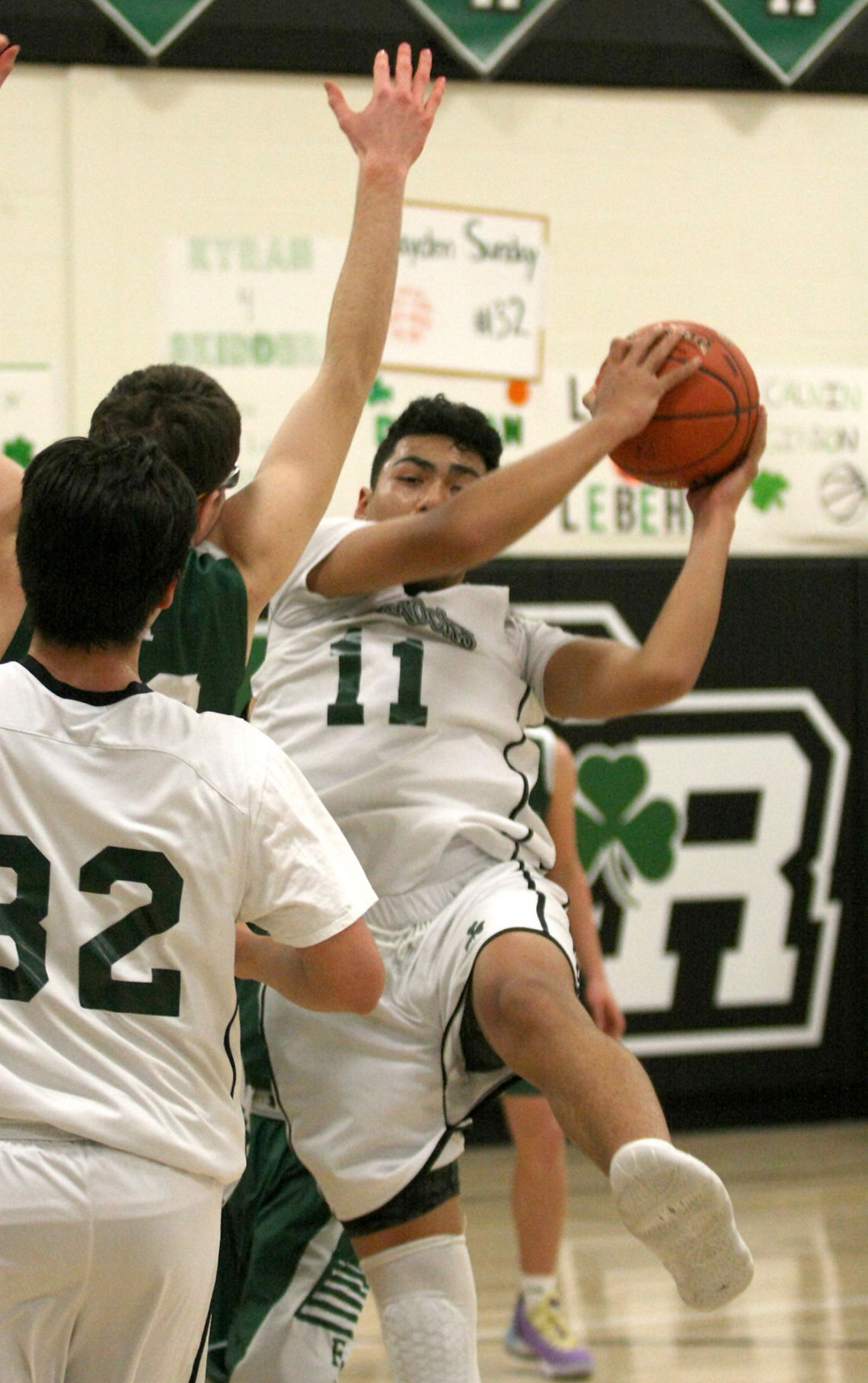 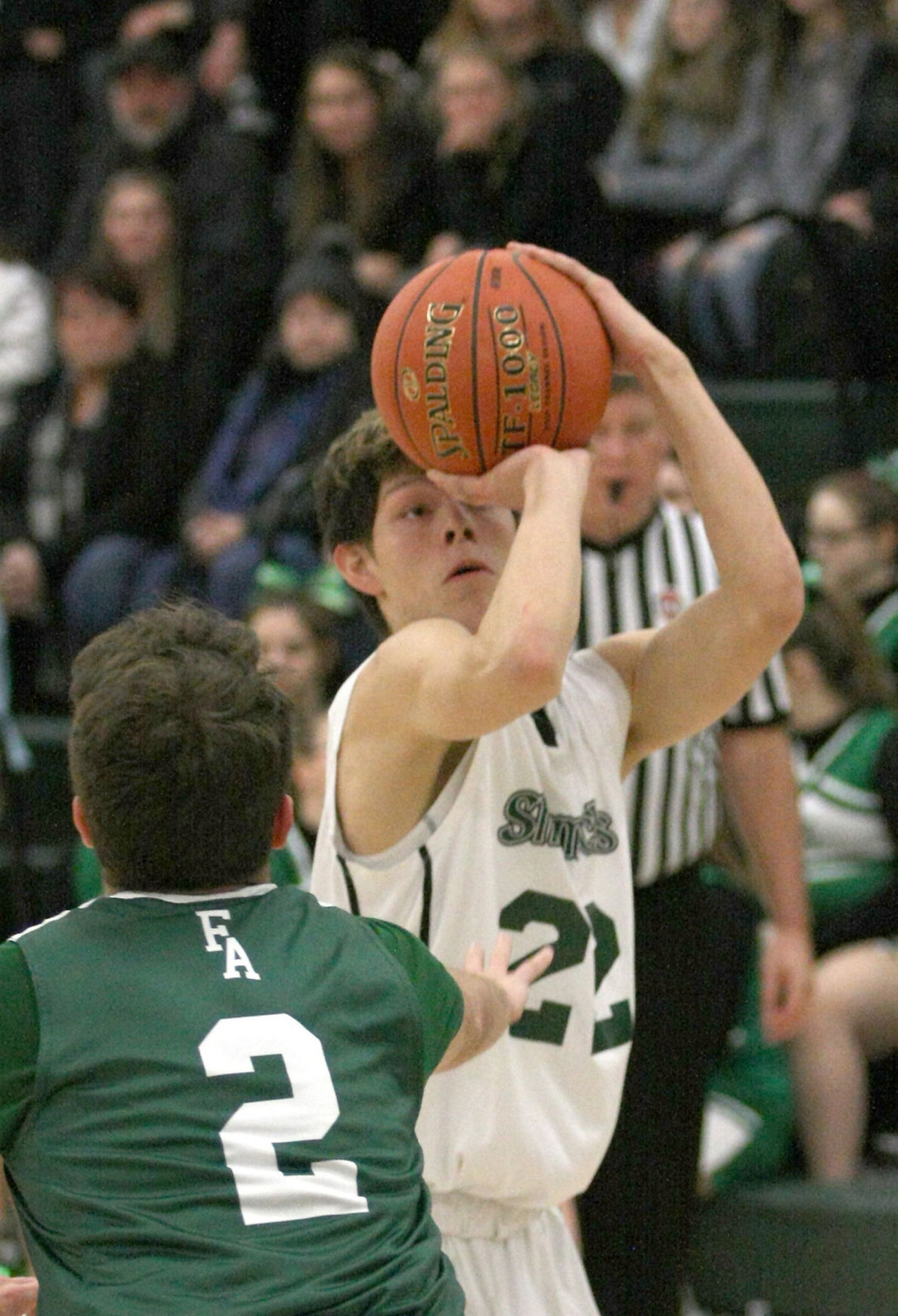 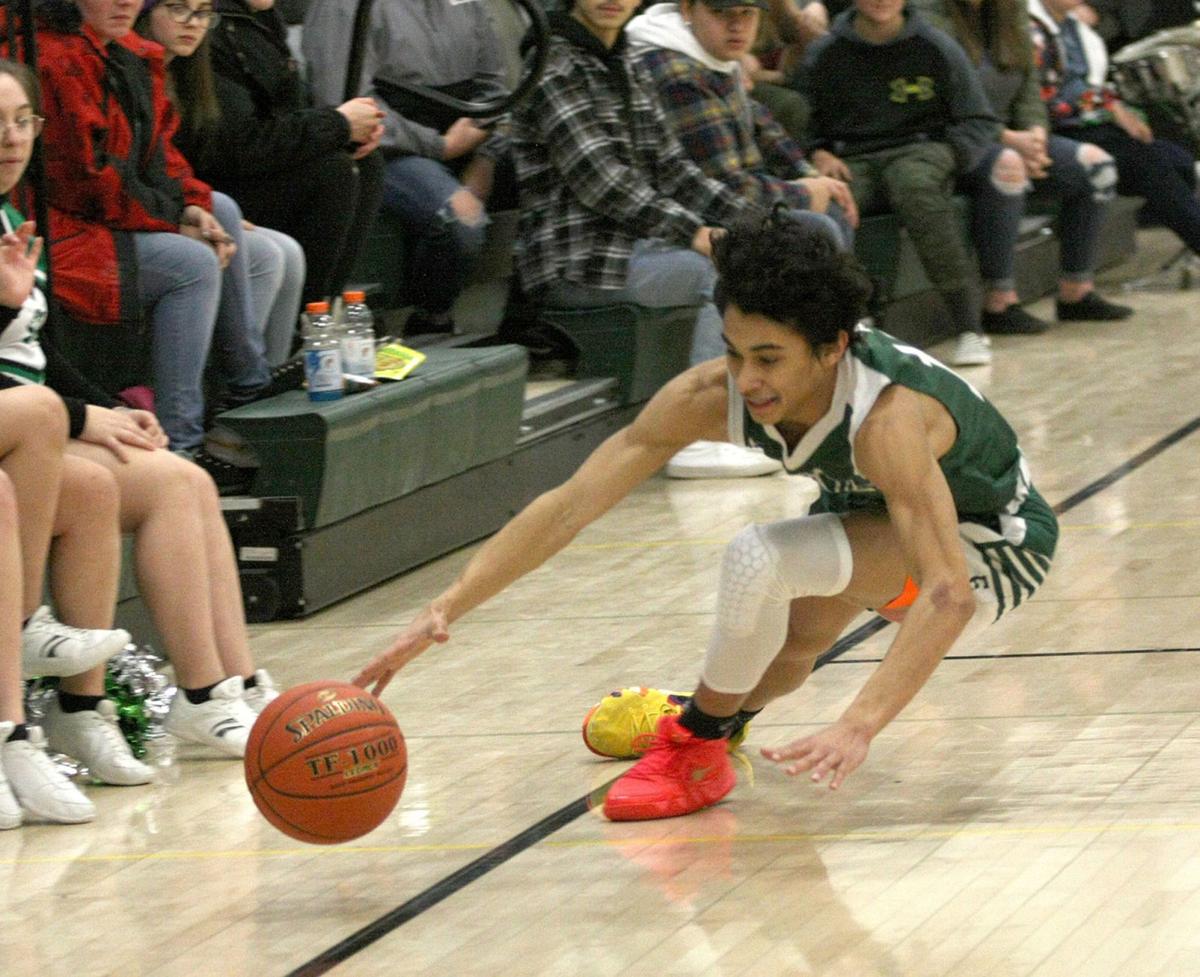 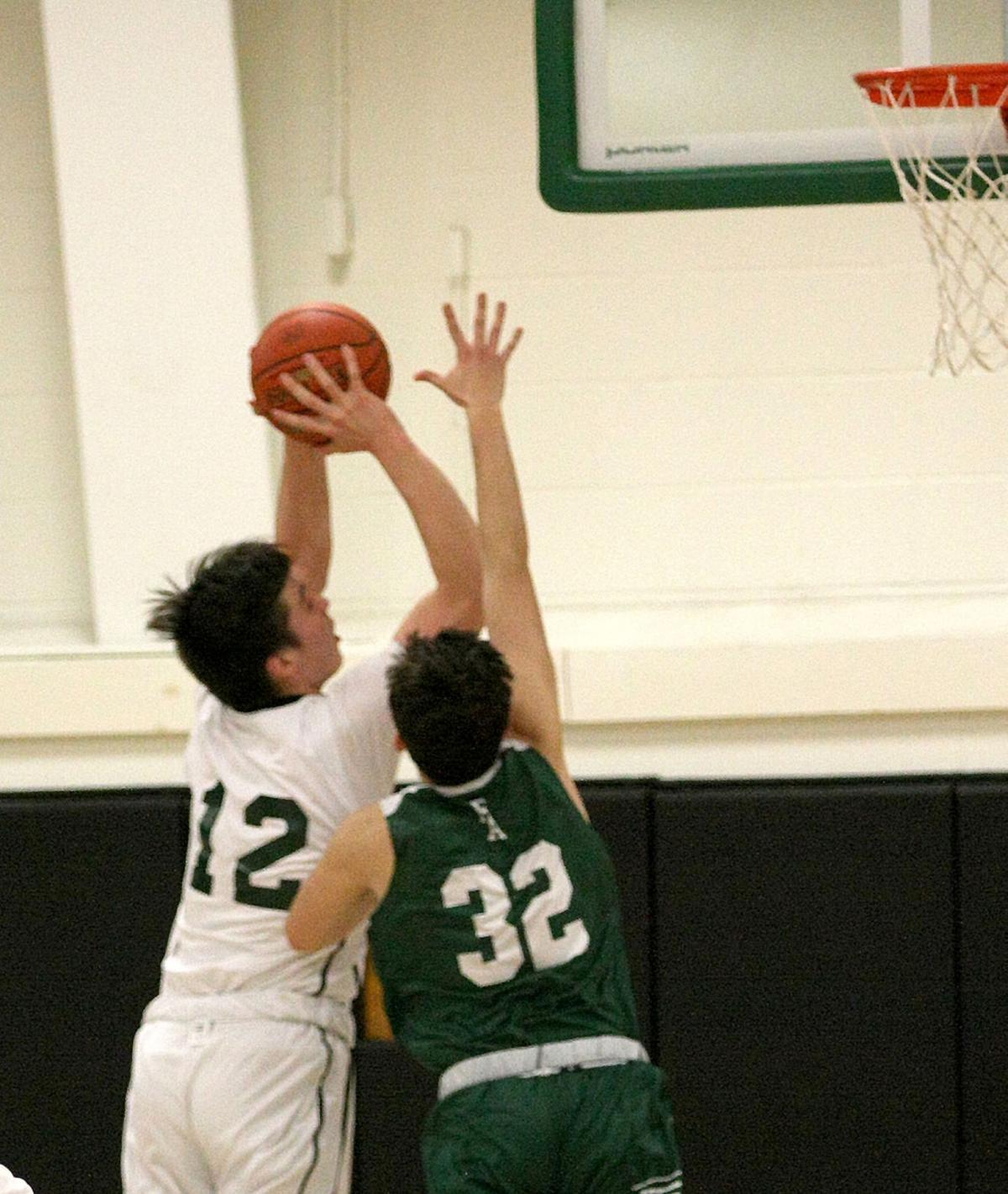 John Gokey, The TelegramFranklin Academy’s Aiden Decillis fires home one of his four three-point baskets during the Huskies’ nine-point road win at Salmon River on Tuesday.

John Gokey, The TelegramSalmon River’s Kyran Skidders drives baseline during the NAC Central Division home game against Franklin Academy on Tuesday. The Shamrocks erased a 22-point deficit during a fourth-quarter run, but fell nine points short in a loss to the Huskies.

Playing on consecutive nights is tough enough for high school players. Playing on road games on back-to-back nights is even tougher, especially when one of those road games involves a nearly two hour bus ride.

The Franklin Academy boys survived both roads games, picking up a Northern Athletic Conference Central Division win in Gouverneur on Monday. The Huskies turned around less than 24 hours later and made the short jaunt to Fort Covington for another Central Division contest and came away with a 64-55 victory against the host Salmon River Shamrocks on Tuesday.

Also recording wins on consecutive days were the Chateaugay boys and Franklin Academy girls, as both teams earned divisional wins on their home courts.

Chateaugay was coming off a gut-check win at home against Section 7’s Northeastern Clinton on Monday. The Bulldogs earned their second win in as many days with a 67-29 NAC East Division rout against the visiting Parishville-Hopkinton Panthers.

Meanwhile in Malone, the Franklin Academy girls rallied from a first-quarter deficit and posted a 51-45 win against Central Division rival Gouverneur for their back-to-back victories after a one-side win against Salmon River on Monday.

Franklin Academy 64, Salmon River 55: In Fort Covington, the Huskies came out of the gates strong and built a 17-6 lead after the opening quarter and increased that advantage to 29-14 at the half. The Huskies upped their lead to 22 points, 45-23, in the third quarter, then had to hold on as the Shamrocks put together a fourth-quarter rally that saw the FA lead shrink to seven points. The Salmon River run was highlighted by a sweet scoop pass from guard PJ Ghostlaw to center Hawi Cook-Francis for a two-handed slam.

After the dunk, the Huskies regained their momentum, increased their lead back to double digits and finally had to settle for the nine-point win, a victory that kept the Huskies in second place in the Central Division standings with a 7-1 divisional record. The victory keeps FA one game behind division-leading Ogdensburg.

Aiden Decillis paced the FA offense with 17 points, including four of the team’s eight 3-pointers, while Payton Poirier followed with a 10-point outing. Keegan Monette (4 rebounds) and Damien Poirier followed with nine and eight points, respectively, as Jake VanSteenburg finished with seven points. Gavin Barse added five points to the win and Patrick Poupore scored four, as Alex Preve and Alejandro Sosa completed the output with two points each. Although he didn’t find his way into the scoring column, senior Keith Shafer contributed three rebounds and two steals to the win.

“You have to give Salmon River a ton of credit. They didn’t quit in the second half and they outplayed us over the last 16 minutes of the game,” Lamay explained.

Ghostlaw added 10 points, including a pair of triples to the Salmon River effort, while Kyran Skidders and Clayton Jones finished with eight and seven points, respectively. Logan Lebehn chipped in with four points, while Quinton Carle connected on a free throw.

“I thought we held our own against them in the second half,” said Salmon River coach Ron LaFrance.

Both teams are back in action on Friday. Salmon River travels to Ogdensburg, while Franklin Academy hosts Gouverneur. Both games are scheduled to begin at 7:15 p.m.

Chateaugay 67, Parishville-Hopkinton 29: After struggling to find its offensive rhythm in a nonconference home win on Monday, the Bulldogs started Tuesday’s game on fire against the visiting Parishville-Hopkinton Panthers. Chateaugay tossed in 25 points during the opening eight minutes and never looked back en route to the win and keep its unbeaten season intact.

Jonah McDonald (7 rebounds) and freshman Walker Martin (5 steals) scored all of the Bulldogs’ points during the first quarter, with McDonald tossing in five 3-pointers, while Martin connected on two from downtown and scored 10 of his 20 points during the stanza. McDonald led the way with a game-high 23 points and finished with seven triple – in only two quarters. Martin ended his outing in the third quarter.

“We came out and knocked down shots in the first quarter. Walker and Jonah combined for all 25 of our points,” recalled Chateaugay coach Mike Martin. “Everyone got in a lot tonight and contributed nicely to this win.

“We definitely shot the ball much better tonight,” added the CCS coach.

The remainder of the Chateaugay offense was spread out quite well, as Logan Secore tossed in seven points and collected seven caroms, while Silas Lewis scored four points and Cameron Tracy finished with three points and grabbed five rebounds.

Jed McDonald was as solid as ever despite scoring just two points. He pulled down six rebounds, handed out five assists, made three steals and blocked three shots. Carson Richards, Aiden Tam, Chase Thomas and Matt Beaudin completed the Chateaugay scoring with two points each.

Chateaugay travels to Norwood-Norfolk, while Parishville-Hopkinton returns home for an East Division contest against Tupper Lake. Both games on Friday are scheduled to begin at 7:15 p.m.

Franklin Academy 51, Gouverneur 45: The visiting Wildcats held a five-point lead, 22-17, after a fast-paced opening eight minutes of Central Division action on the hardwood inside the Eileen M. Kilcullen Sports Facility at Franklin Academy, then the Huskies clamped down defensively and limited the lady Cats to just four points during the second quarter and led 31-26 at the half. The Huskies (7-5, 6-3) tacked on another four points to their halftime lead and carried a 44-35 lead into the final stanza, a quarter that saw the Wildcats (8-6, 5-4) outscore the Huskies 10-7.

“It was a very fast-paced first half with both teams pushing the ball and converting baskets in a see-saw half,” said FA coach Shelley Skelly. “We really picked up the defense to get some turnovers and steals, which put us ahead going into the break.

“We talked about making some adjustments, both offensively and defensively, during halftime and the girls listened and did a great job executing the things we talked about,” added Skelly. “The girls worked hard for this win, and should be proud of their efforts.”

Madison Ansari and Caitlin Douglas paced the Huskies offensively and combined for 30 points. Ansari finished with 18 to go along with eight steals, four assists and four rebounds, while Douglas – who picked up her fourth foul early in the fourth quarter – added 12 points, six rebounds, five assists and three steals to the win.

“Caitlin picked up her fourth foul earlier in the fourth quarter and that seems to spark her. She seemed to be more determined and did an outstanding job creating turnovers,” recalled Skelly.

Leah Gallagher contributed 10 points and eight rebounds to the victory, while Mackenzie Lane finished with eight points, five rebounds and made four steals. Ryleigh McCauley had another solid outing and added to the win with three points, six assists and six rebounds.

Gouverneur hosts General Brown in a nonconference game at 7:15 p.m. on Thursday, while Franklin Academy is off until Friday, Jan. 24, when they travel to Ausable Valley for a nonconference contest.