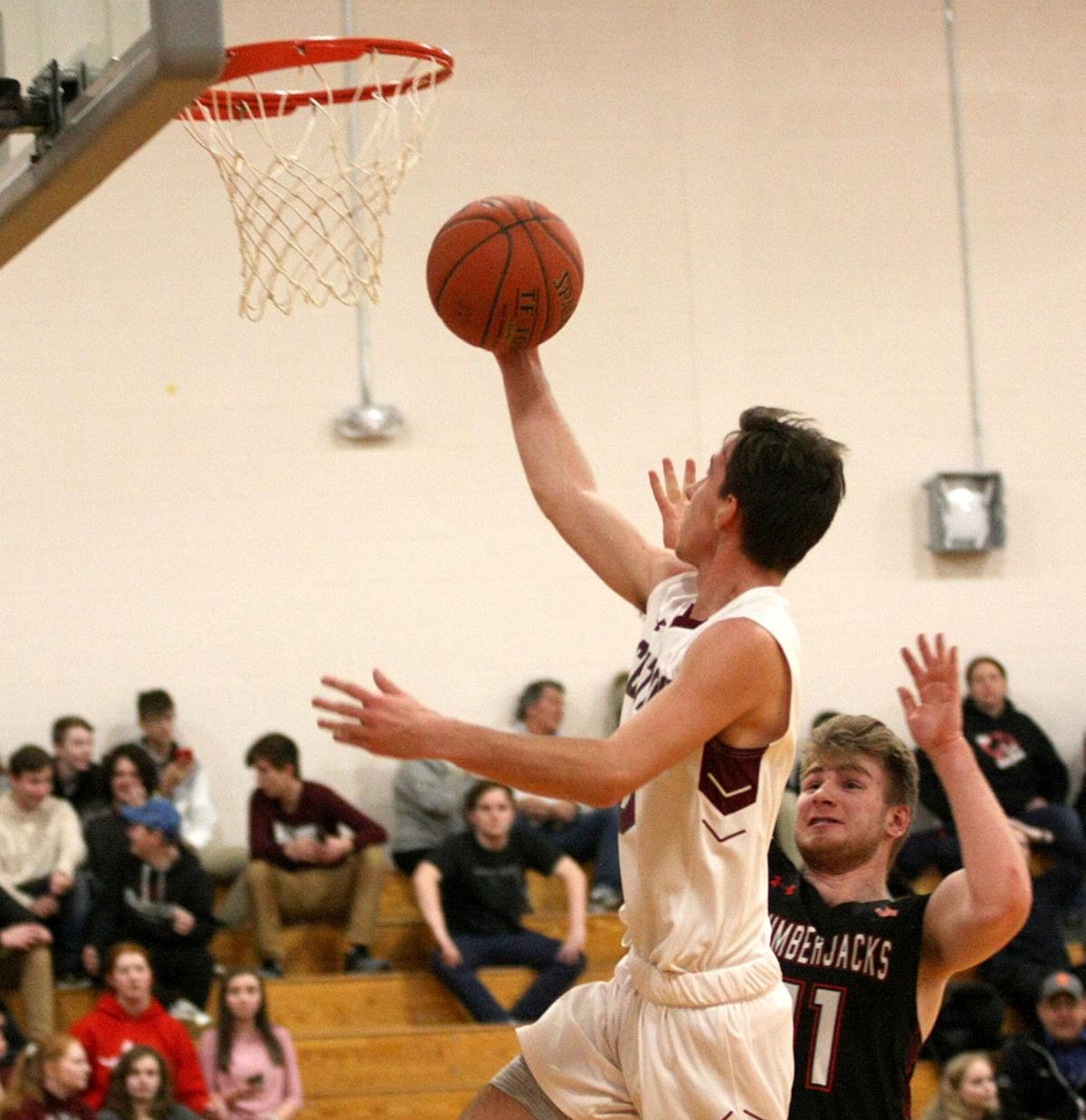 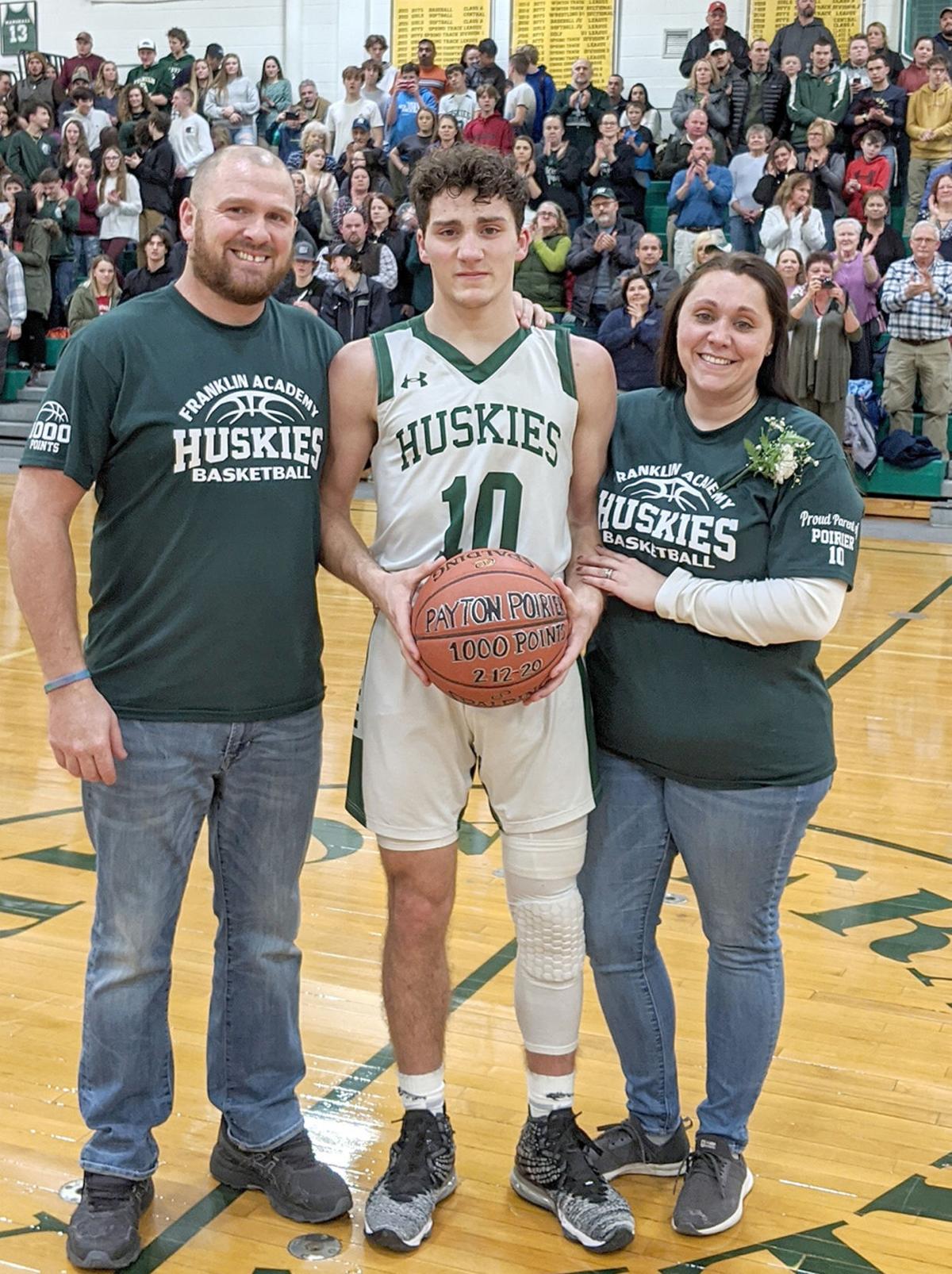 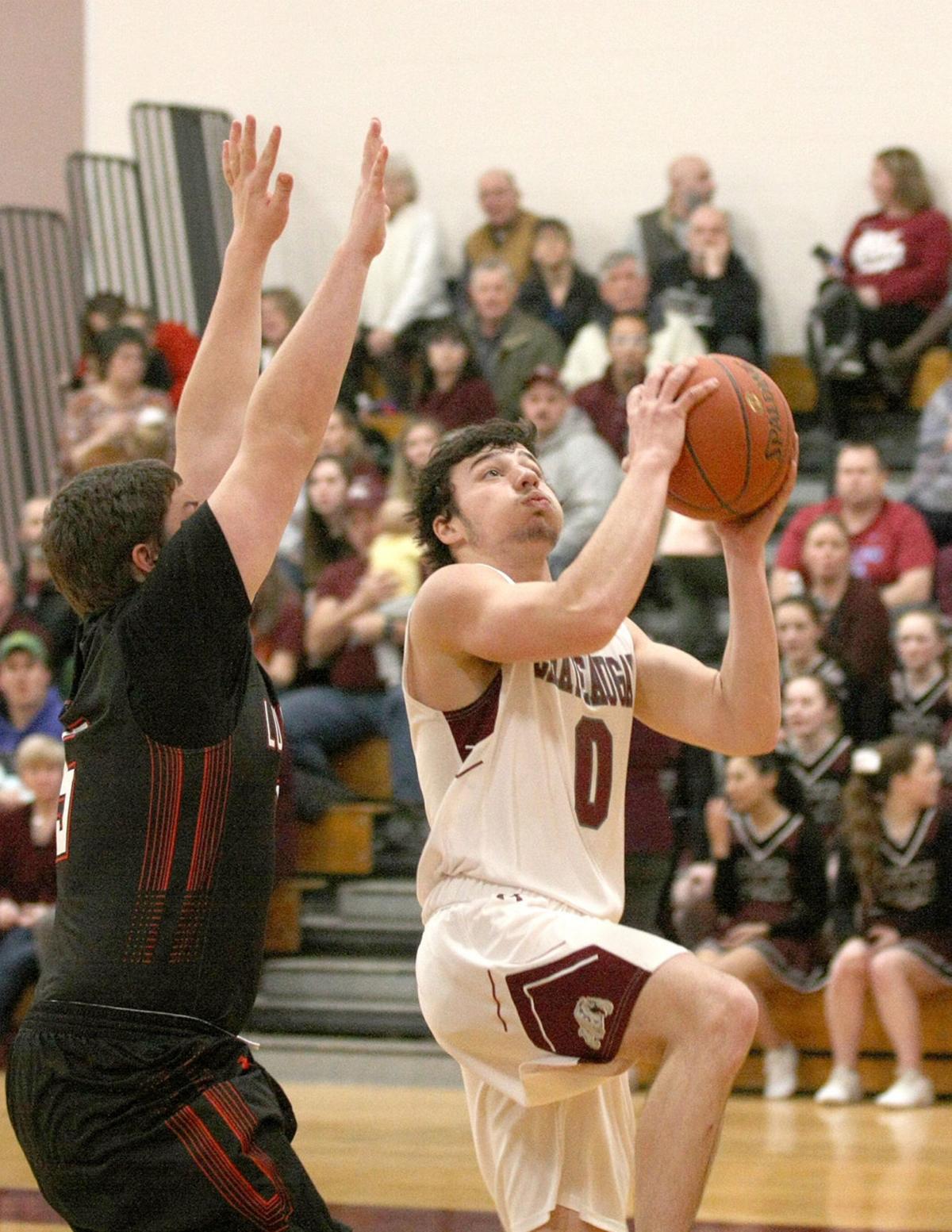 John Gokey, The TelegramChateaugay junior Jed McDonald (0) drives past a Tupper Lake defender and scores two of his seven points during the Bulldogs’ 77-41 NAC East Division win on Wednesday. 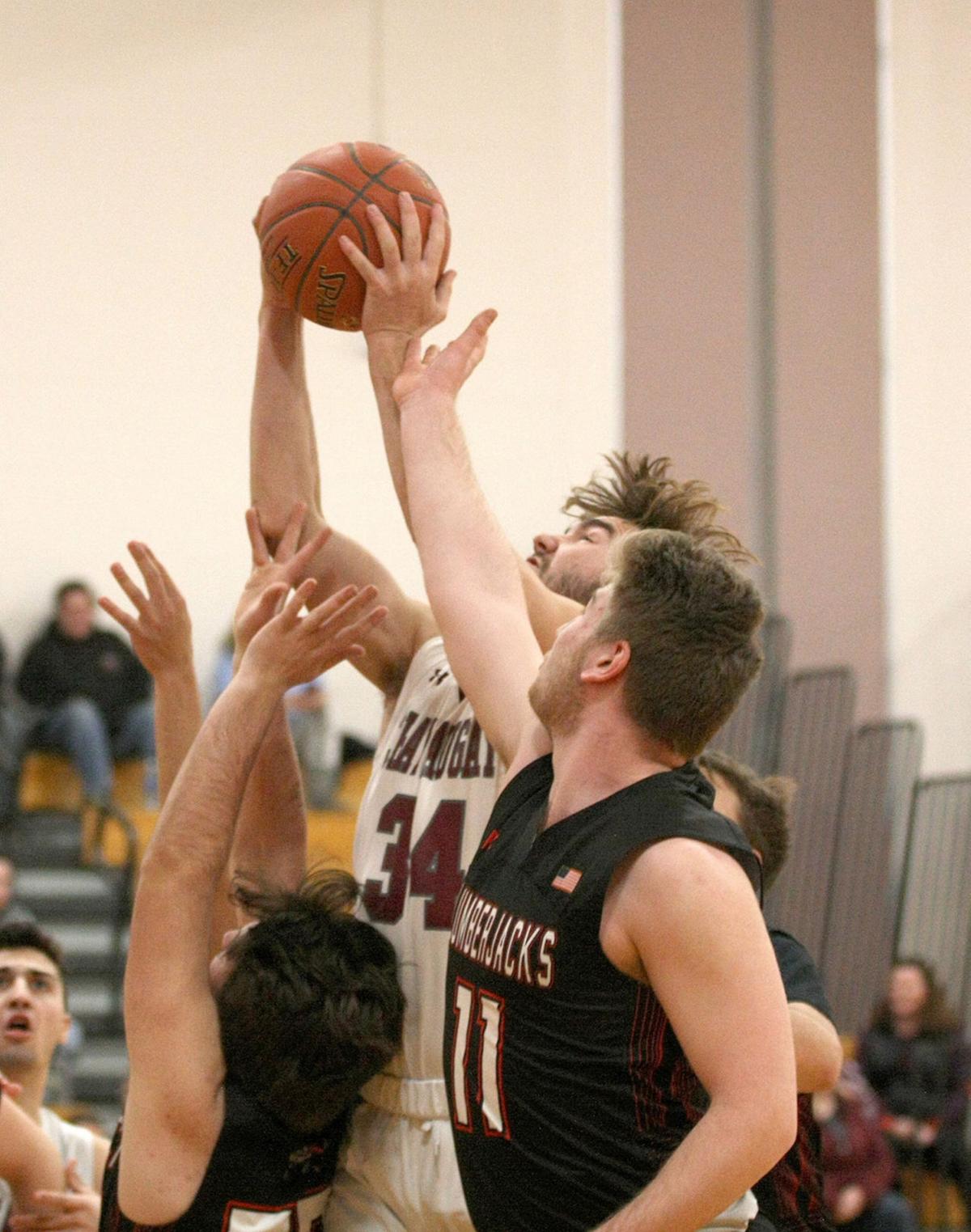 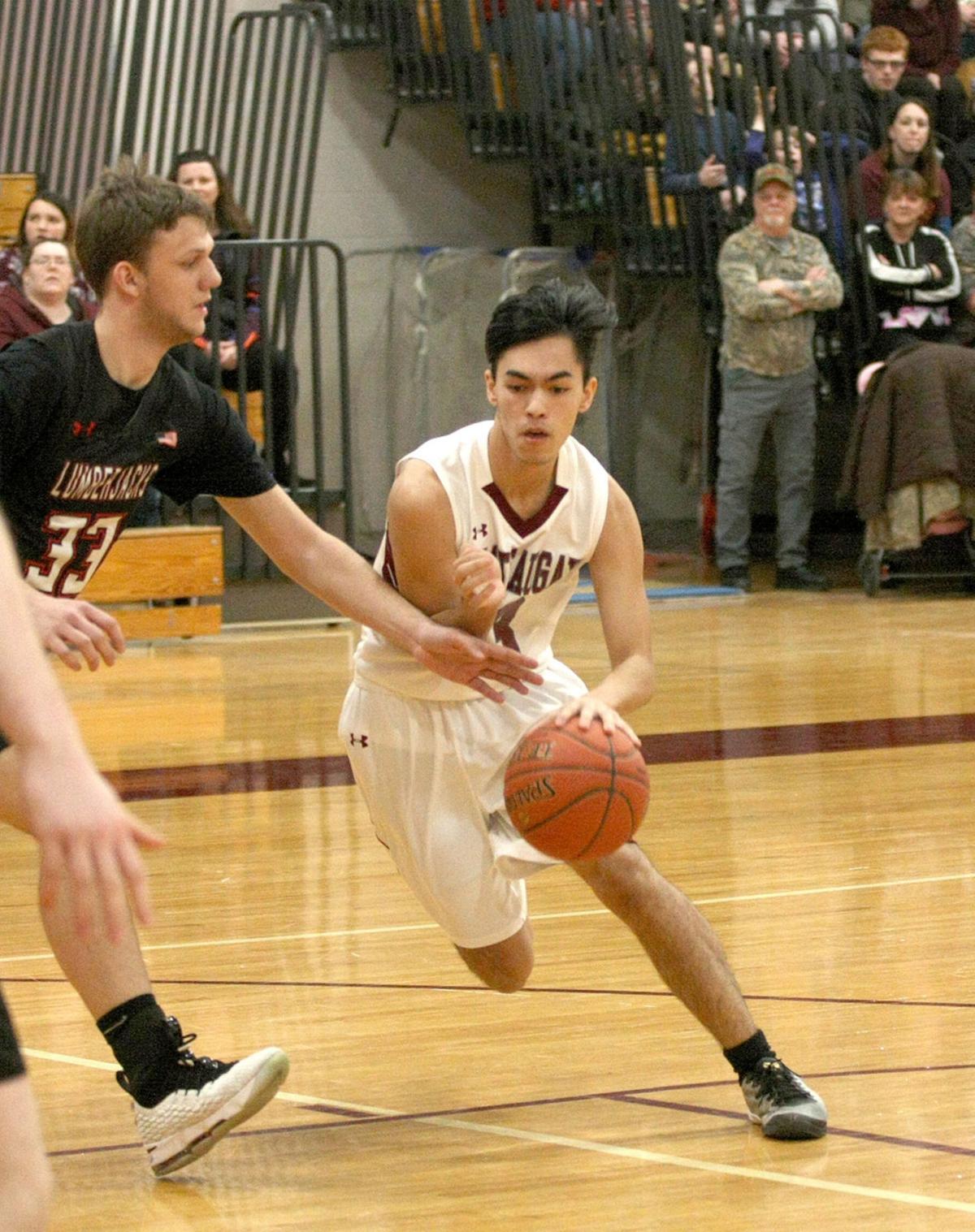 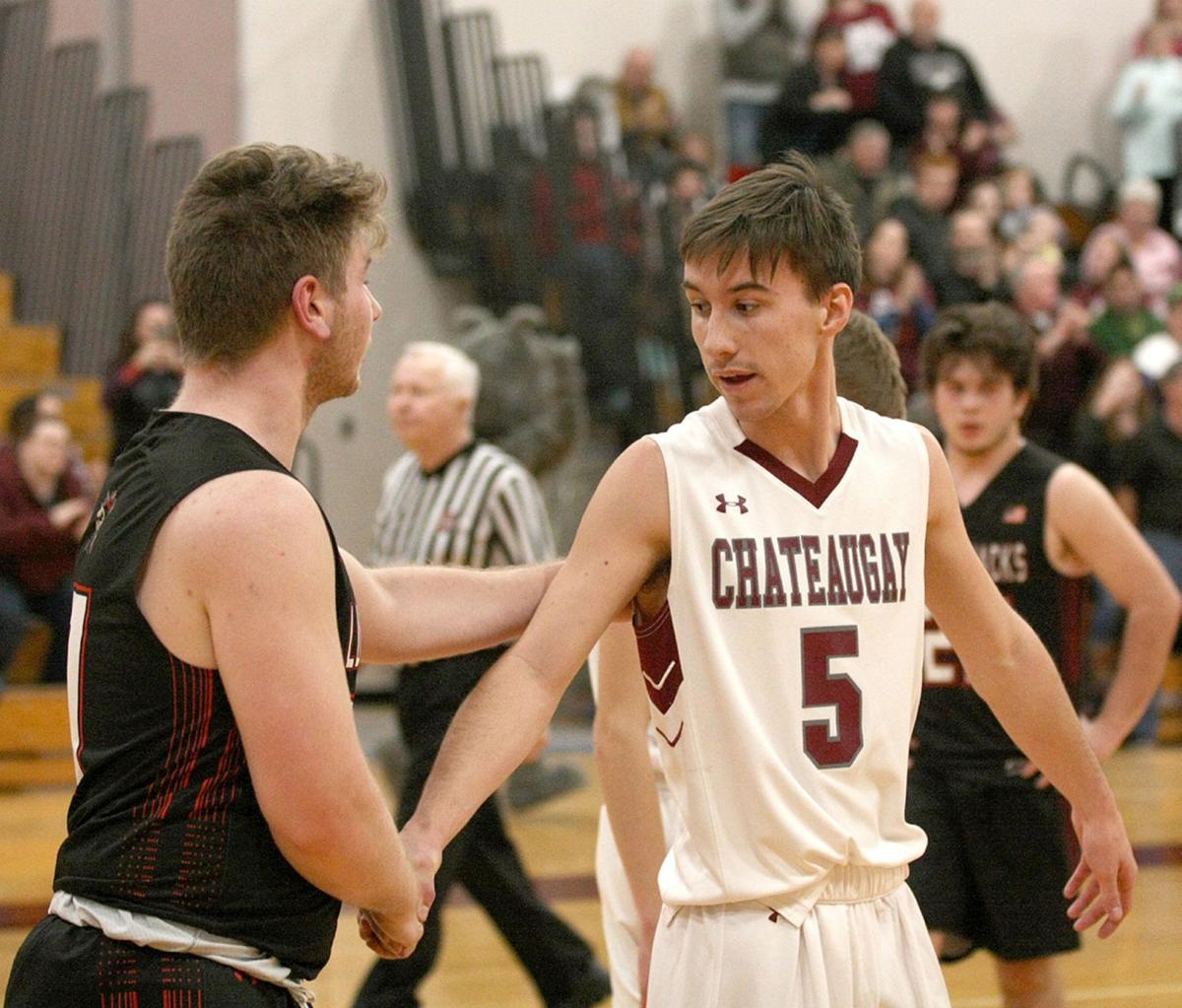 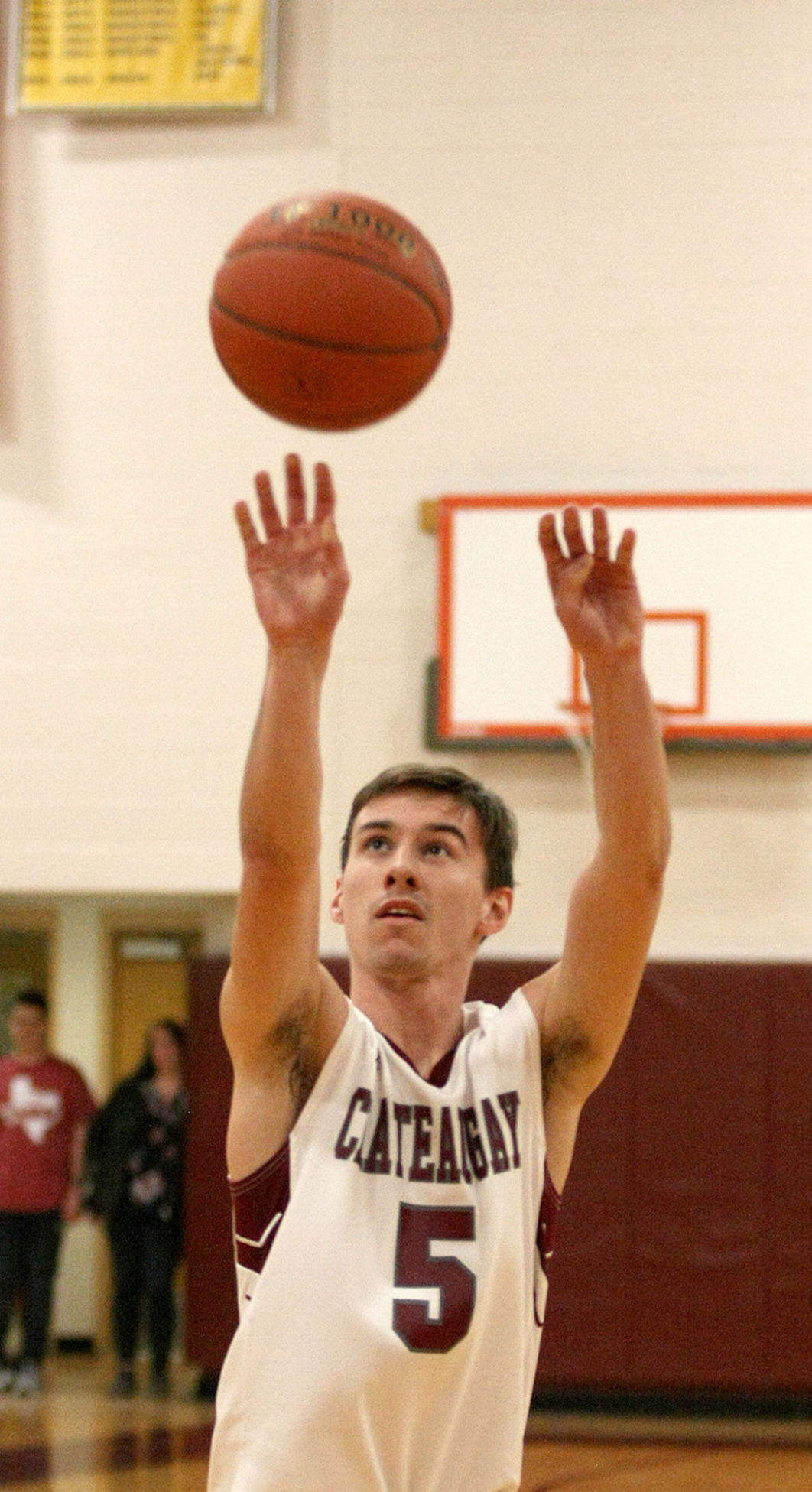 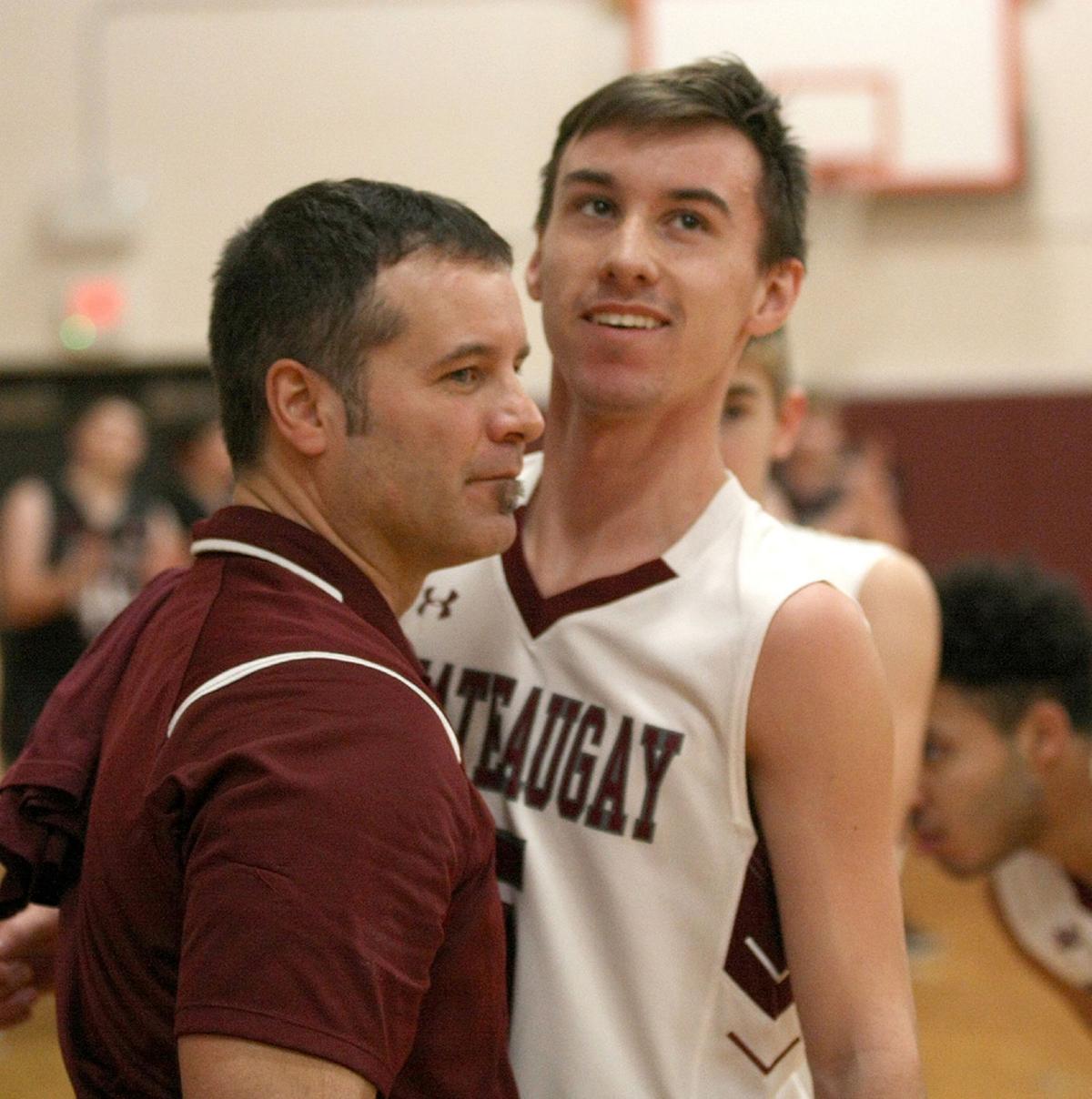 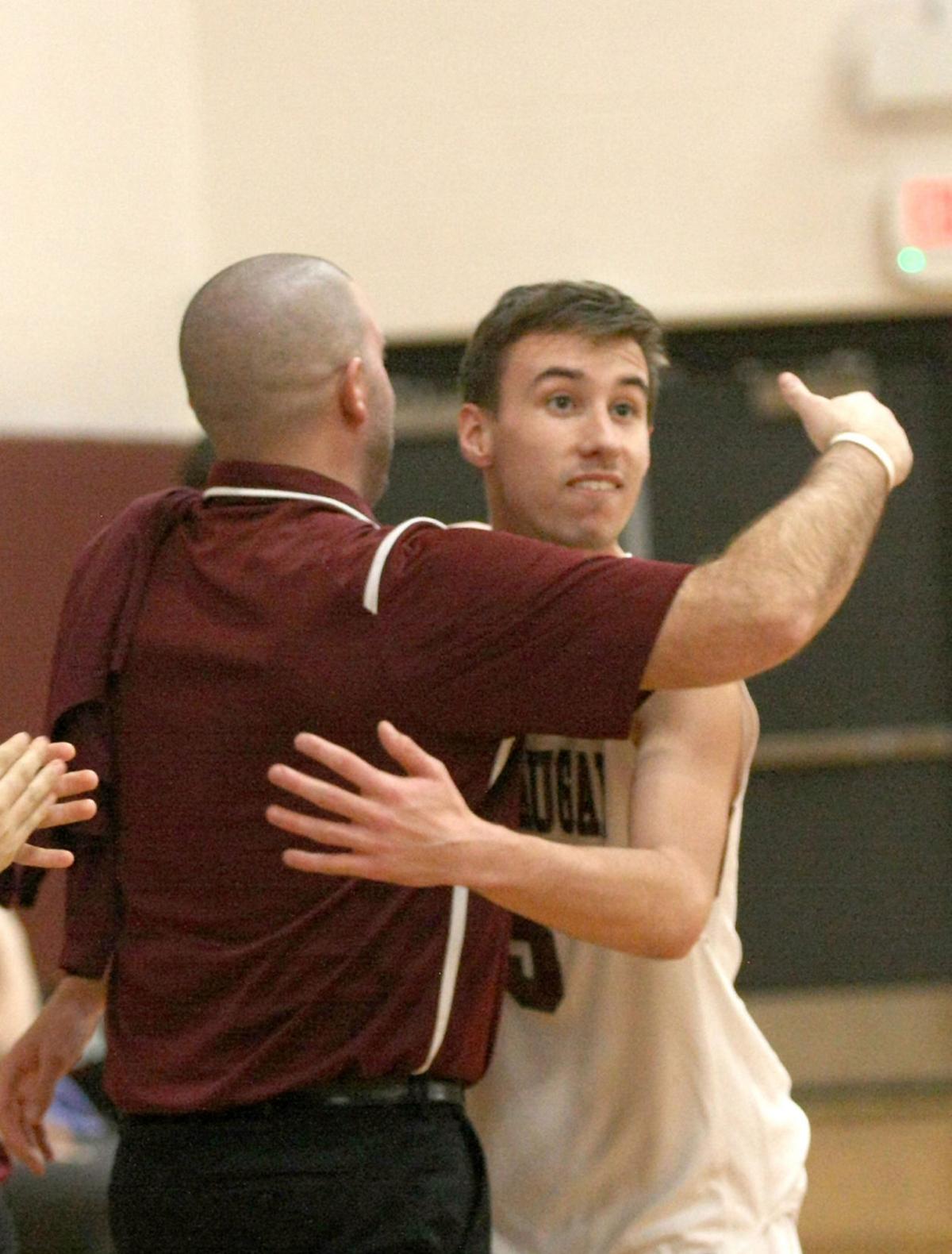 John Gokey, The TelegramChateaugay junior Jed McDonald (0) drives past a Tupper Lake defender and scores two of his seven points during the Bulldogs’ 77-41 NAC East Division win on Wednesday.

CHATEAUGAY – Records are made to be broken.

For just the third time in his four-year varsity career, McDonald was not in the starting lineup and entered the contest against Tupper Lake midway through the opening stanza. He managed just a free throw during his time on the hardwood in the opening quarter, then scored the record-breaking point on the drive to the hoop early in the second. McDonald entered Wednesday’s contest averaging 31.8 points per game and had one of his lowest offensive outputs of the season, finishing with a game-high 23 points and currently sits atop the section with 1,929 points, as the Bulldogs pulled away to a 77-41 win against the Lumberjacks.

Chateaugay, which entered Wednesday’s divisional contest as the top-ranked Class D team in the state, will be the top-seeded team for the upcoming sectional playoffs with a 20-0 record and concluded its regular season with a perfect 14-0 record.

Also on Wednesday, Franklin Academy senior Payton Poirier became just the third Franklin Academy male varsity basketball player (Derek Marshall 1,107 points and Dean Bissell 1,035) to surpassed the 1,000-point plateau in career scoring. Poirier, who was just four points shy of the four-digit mark entering Wednesday’s NAC Central Division game against St. Lawrence Central, capped off his final contest on his home hardwood inside the Eileen M. Kilcullen Sports Facility at the Franklin Academy High School with a game-high 21 points in the Huskies’ 57-50 victory over the Larries. Poirier attained his milestone mark at 7:27 of the second quarter,

In the only other boys basketball game on Wednesday, Ogdensburg completed its undefeated Central Division-run at 14-0 with an 87-40 road win at Gouverneur.

Chateaugay 77, Tupper Lake 41: On senior night in Chateaugay, the Bulldogs struggled in the early going, as Tupper Lake grabbed a 4-1 lead during the first four minutes of the opening quarter. It wasn’t until the normal starting lineup entered the contest with 4:32 left that the Bulldogs began to find their offensive rhythm and put the ball through the hoop.

Tupper Lake held a 13-11 lead after the opening eight minutes of play, then the Bulldogs went on a 20-0 run to begin the second quarter that things began to look somewhat familiar. After a pair of timeouts by Tupper Lake, the Lumberjacks finally scored their first points of the period, but Chateaugay continued its offensive pace and finished off the first half with a 45-21 lead. The Bulldogs increased that advantage to 66-35 after three quarters, then capped off the win by making sure each and every senior found his way into the scoring column – including Carson Richards’ first-ever three-point basket.

“What a great senior night in Chateaugay. This was a fantastic way to cap off a great regular season, and having Jonah pass Porter for the all-time section scoring record on senior night is pretty cool. What an amazing accomplishment,” said Chateaugay coach Mike Martin.

“We are so proud of these six seniors – Logan Secore, Carson Richards, Aiden Tam, Jeremyah “JJ” Johnston, Cameron Tracy and Jonah McDonald. They are great young men and have done everything we have ever asked of them.”

Yet, McDonald showed just what an unselfish player he really is, allowing his five classmates to start the game while he sat on the sideline, despite the sectional record at stake.

“That was his decision,” stated Chateaugay assistant coach Jason LaPlante. “Jonah came to us a couple of weeks ago and asked if it would be possible to start the game this way. Mikey and I agreed that it was the proper thing to do, so we did.”

It wasn’t the first time in McDonald’s four-year varsity career that he sat on the bench at the start of the game.

“I didn’t start on senior nights in both my freshman and sophomore seasons,” said McDonald, who capped off his home contest with a game-high 23 points, to go along with eight each of rebounds, assists and steals. “I am glad that they (the two scoring milestones) are over, now we can concentrate on making our run to the (Section 10 Class D) title.”

“We are very proud of this group for winning a tough East Division and finishing this regular season at 20-0,” continued Martin. “Now, we need to turn our attention to trying to make a nice postseason run.”

Franklin Academy 57, St. Lawrence 50: It would seem that personal milestones didn’t come easy for either player on Wednesday, as Franklin Academy’s Payton Poirier also waited until the second quarter to break into the four-digit plateau in scoring.

Needing just four points to surpass the 1,000-point barrier, Poirier scored just two on a couple of free throws in the first quarter, then moved past the 1,000-point mark with a three-point basket from the left wing. He finished off the Huskies’ victory with a game-high 21 points to help the team achieve one of its better divisional records (12-2) over the past several season.

“I would like to congratulate our seniors – Payton Poirier, Keith Shafer and Jake VanSteenburg – for a tremendous career at Franklin Academy. I would also like to congratulate Payton for being the third male player in FA history to reach 1000 points,” stated Malone coach Tim Lamay Sr.

Younger brother Daimen also connected for double digits in the win and finished with 12, as the Huskies’ other two seniors, VanSteenburg and Shafer, who hauled in a team-high eight rebounds, finished with four and three points, respectively.