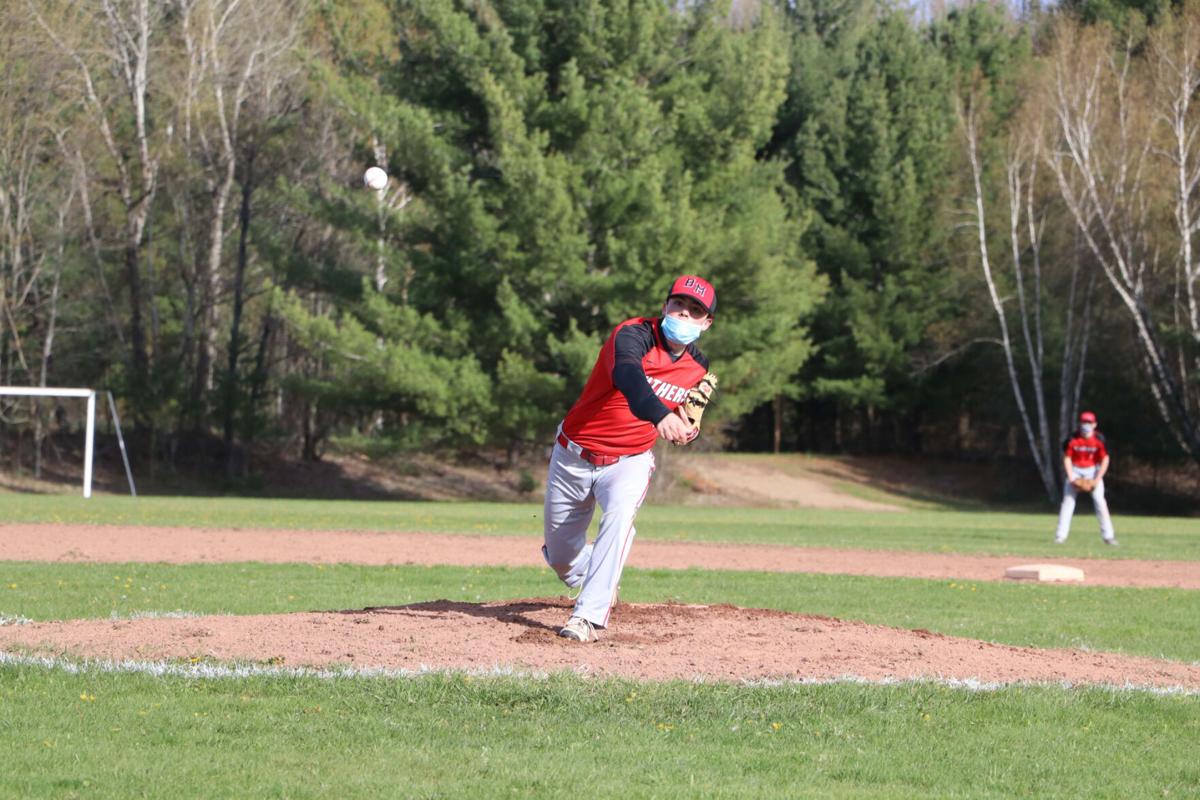 Brushton-Moira's Justin Kennedy throws out a pitch in the first inning. Kennedy struck out eight batters and didn't give any walks. Evan Wheaton/Malone Telegram 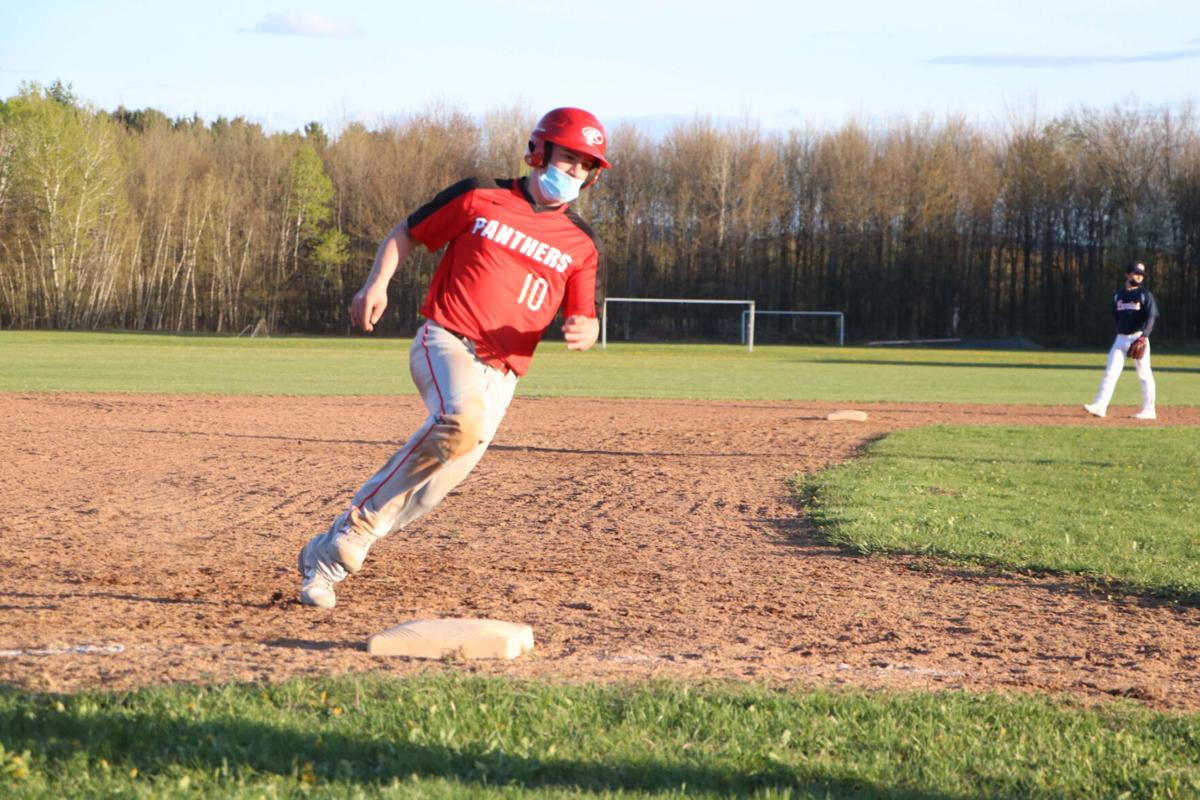 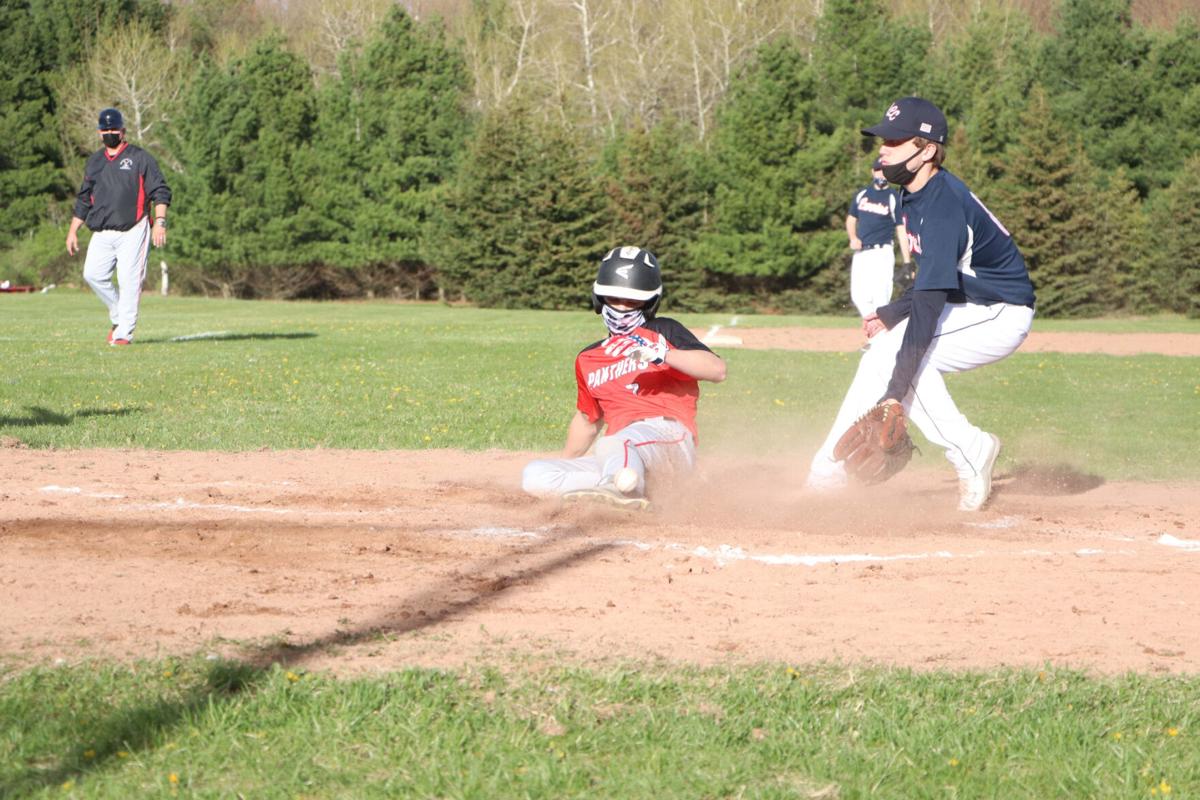 Brushton-Moira's Lucas Bowen is called safe as he slides in at home plate. Evan Wheaton/Malone Telegram 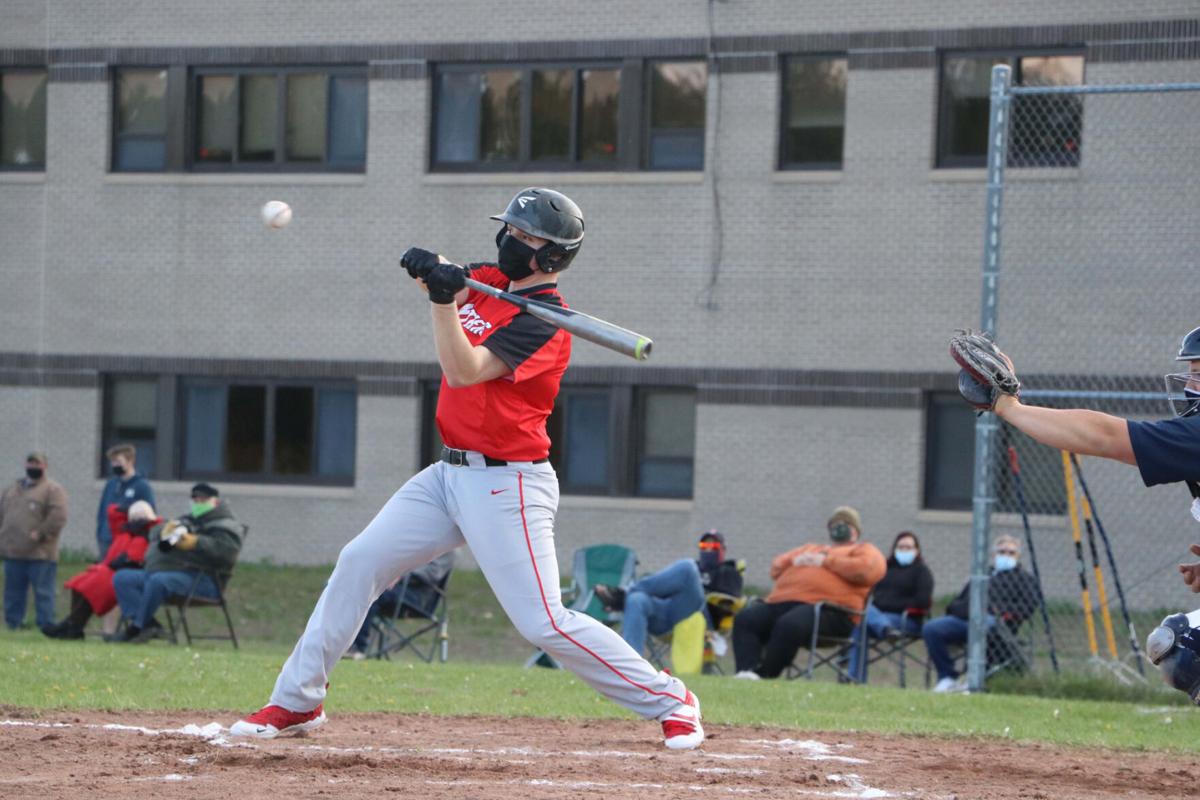 Brushton-Moira's Justin Kennedy throws out a pitch in the first inning. Kennedy struck out eight batters and didn't give any walks. Evan Wheaton/Malone Telegram

Brushton-Moira's Lucas Bowen is called safe as he slides in at home plate. Evan Wheaton/Malone Telegram

BRUSHTON – Justin Kennedy and Dawson White pulled the Brushton-Moira baseball team out of a bind in the fifth inning.

After riding a comfortable lead through the first four frames in part by strong pitching from Kennedy – who struck out eight batters and walked none – he began to struggle on the mound as St. Lawrence made run after run to cut the deficit.

Upon two trips to the mound by Panthers coach Jody Johnston and four runs in the top of the fifth to cut Brushton-Moira’s lead to 8-5, White stepped in and threw a strikeout to retire the sides.

“It was definitely nerve wracking, but all I was doing was just throwing strikes,” White said. “I knew the guys in the field had my back.”

After White got on base in the bottom of the inning, Kennedy stepped up to the plate and slammed a home run to push the Panthers further ahead, 10-5. Brushton-Moira went on to win, 13-6 at home Thursday.

“Dawson shut it down. We had a chance to relax, catch our breath, get back out there and get back on the offensive end again,” Johnston said of White’s relief pitching.

Dawson White r#with the first run of the game here in the bottom of the first. 1-0 Panthers. pic.twitter.com/71ih7e4jMT

White and Kennedy played damage control on both sides to make it out of a shaky frame that saw the Panthers’ cushion in jeopardy.

“It was a good feeling for sure, seeing it go, seeing the outfielders run for it,” Kennedy said of his homer. “I knew I was safe when I hit it.”

🔽3: With the bases loaded, Kennedy hits a double to bring home Gavin Allen and Ajay Martin. Panthers now up 8-1. pic.twitter.com/RqZpVTiVzh

Kennedy went 4-for-5 with six RBI’s and four runs. White followed up by going 3-for-5 with two RBI’s, and struck out four batters upon taking over at the mound.

“It’s a good confidence builder, especially for Dawson,” Johnston said. “He could come in, shut the inning down and wind up back on offense and we got to where we needed to be. I expect that from him and I expect that from all the players.”

The Larries (0-2) made drops in the field on pop-ups in the first inning, resulting in the Panthers (1-0) getting on base early and often. After Lucas Bushey hit a triple to bring home Kennedy, Brushton-Moira finished the first inning with a 3-0 lead.

Wayne Palmer continued the batting production with a double in the bottom of the second to bring home Kennedy for a 4-0 lead.

The batting was on point throughout the night for the Panthers, right through the sixth inning.

“It was really important to make sure we stayed on top of that,” Johnston said.

🔽2: Dawson White back on base on a 2-2 pitch. pic.twitter.com/B3QdwUzqsq

Both teams had their moments of error in the field. While St. Lawrence struggled in the early innings, the Panthers gave up runs later on, while still able to maintain momentum offensively.

“It’s early, it’s our first game. We’re rusty, some of these guys haven’t played in over a year,” Johnston said. “I saw some really good things tonight, I saw a couple things we need to work on, but it’s nothing I’m concerned with.”

Johnston coached Brushton-Moira to a Section 10 baseball championship and the program has been growing strong in recent years. While sectionals are back on for spring sports, the focus is squarely on having a sense of normalcy after a lost season from COVID-19.

The goal is to just have a nice, solid year of play.

“I think it’s really important for the kids to have some normalcy,” Johnston said. “My practices, we don’t go crazy. I just want them to relax, have fun and enjoy this, because for some of them, this is the last year they’ll ever put a uniform on.”

Of 13 players on the roster, the Panthers have nine seniors.

“I’m going to make sure we have a good year, that we have fun and try to last the 12 games we have scheduled,” Johnston said. “We owe it to our kids.”