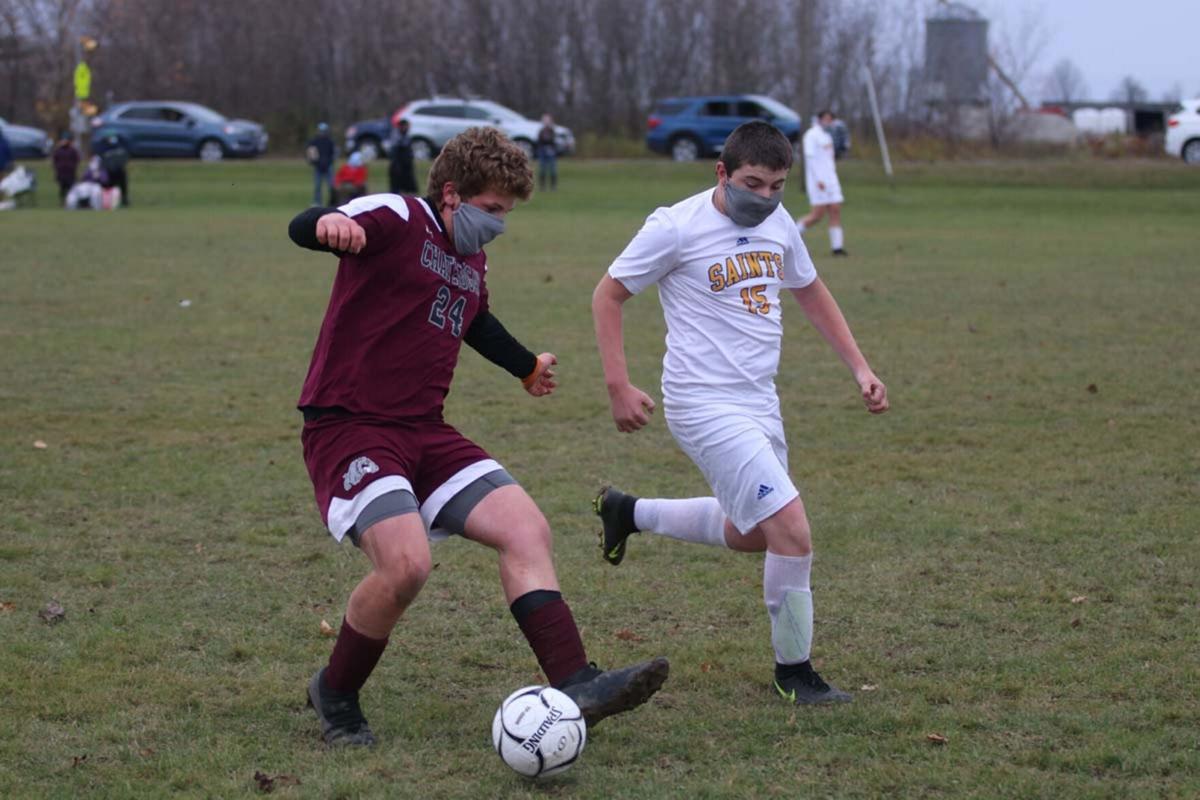 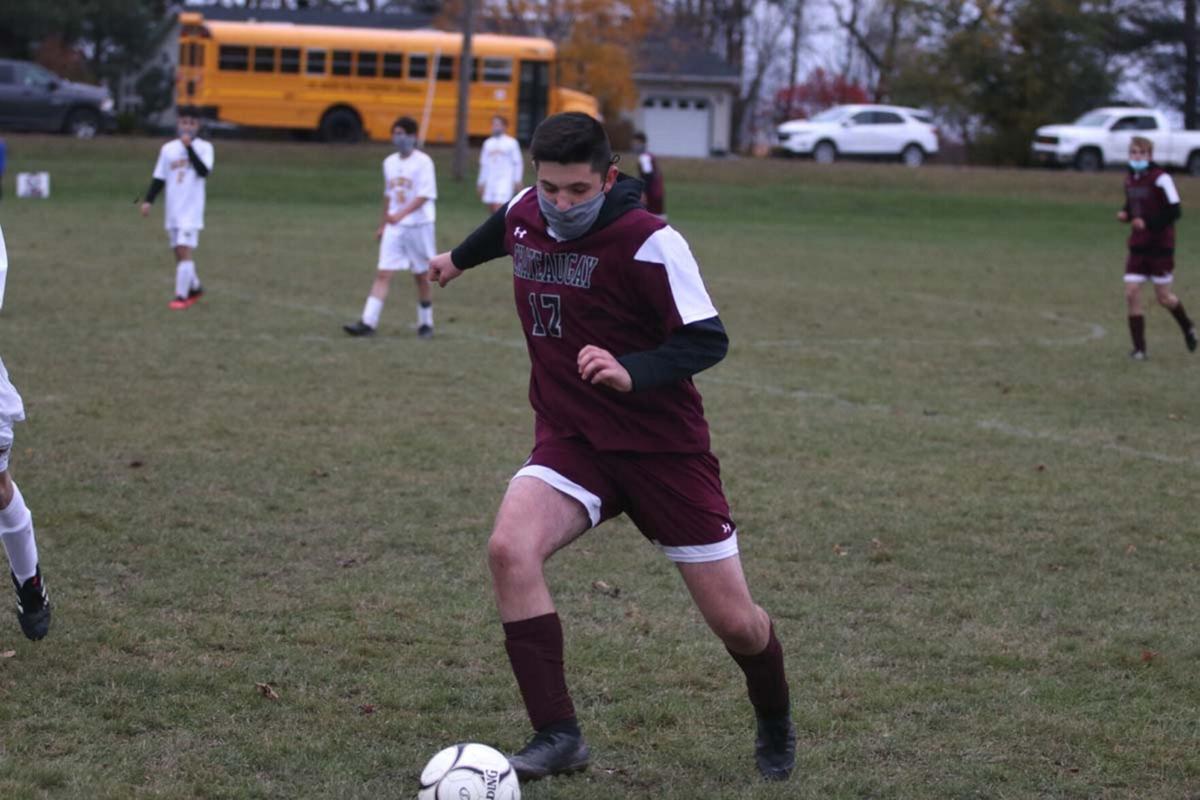 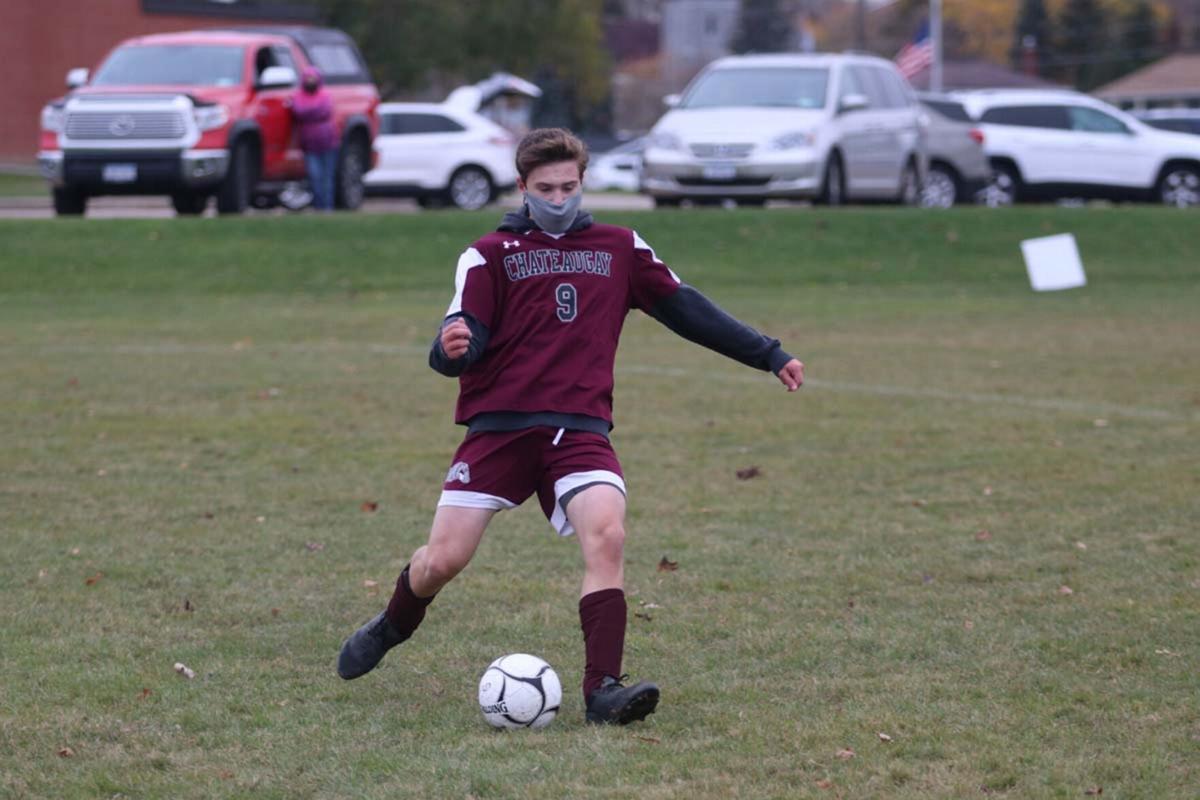 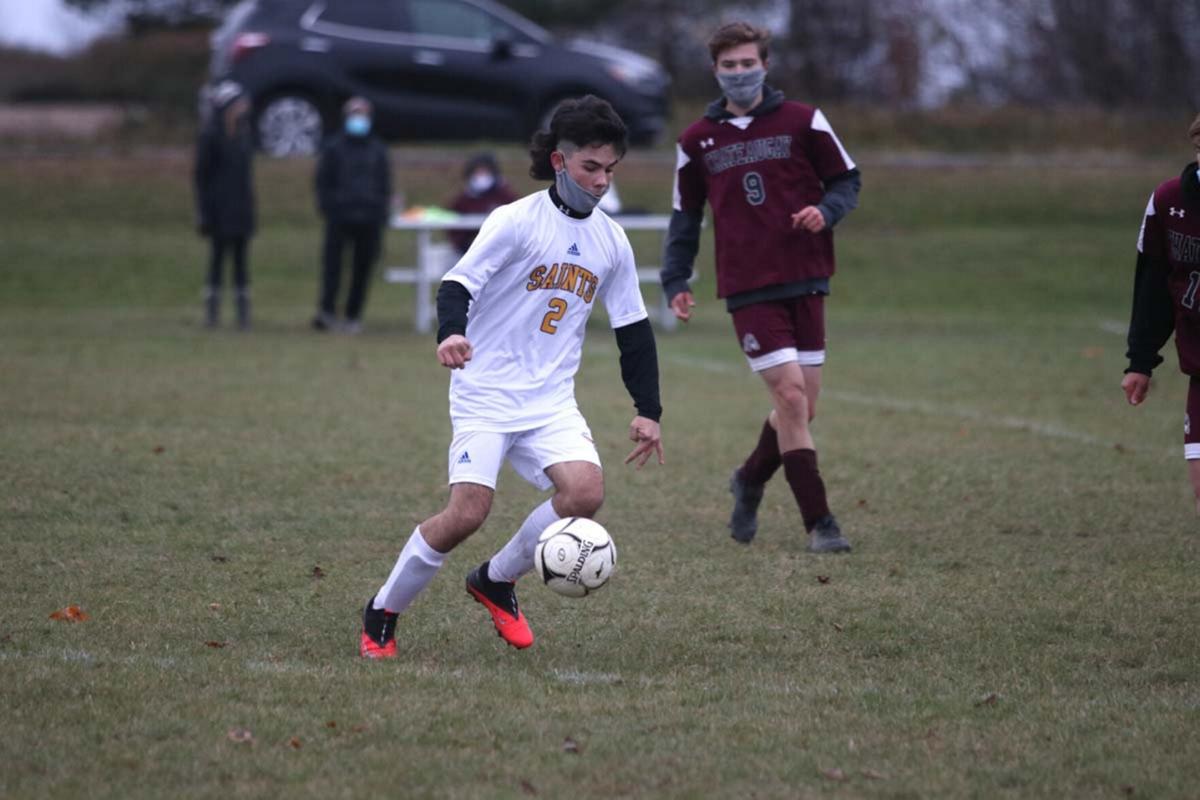 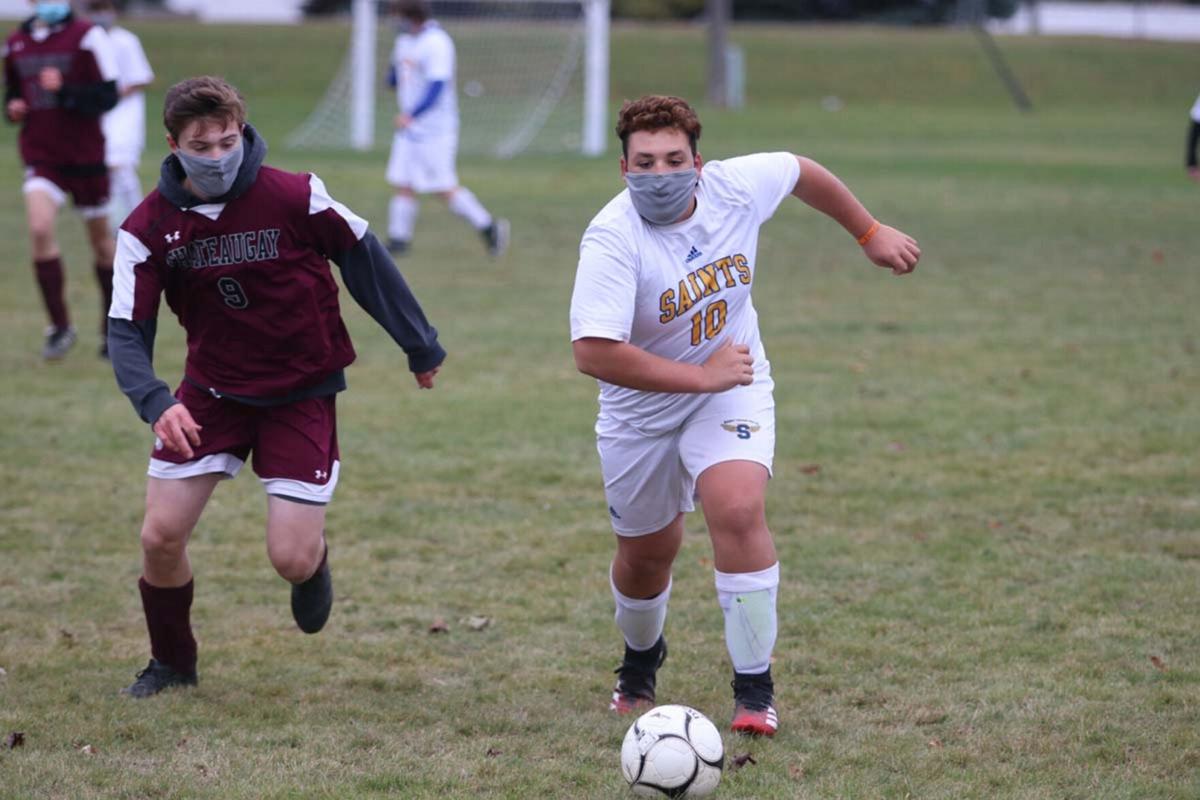 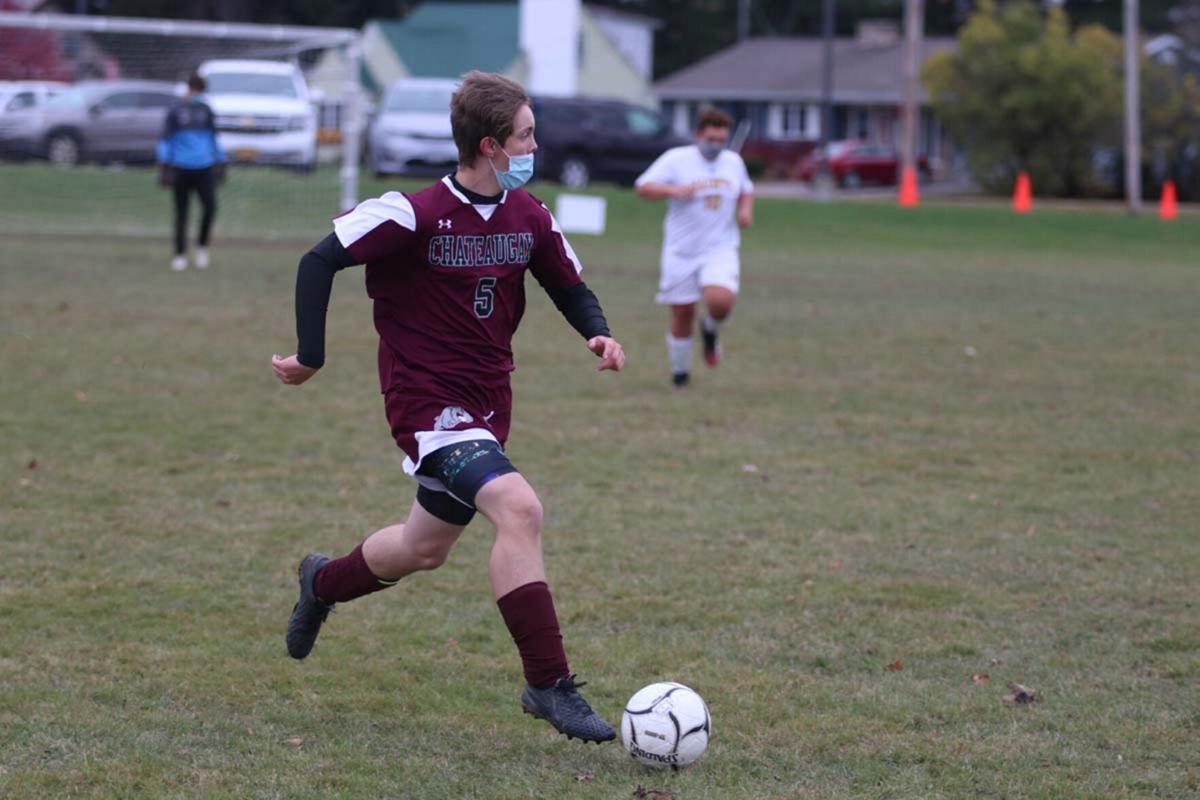 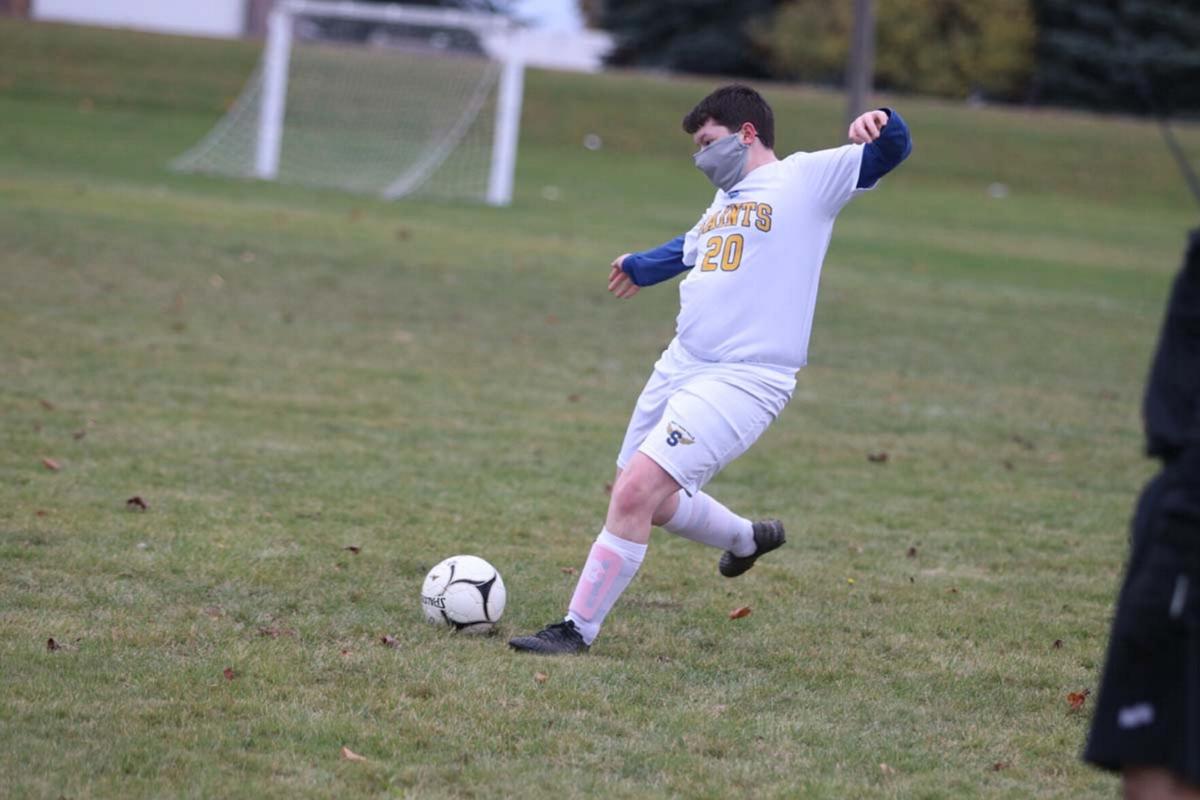 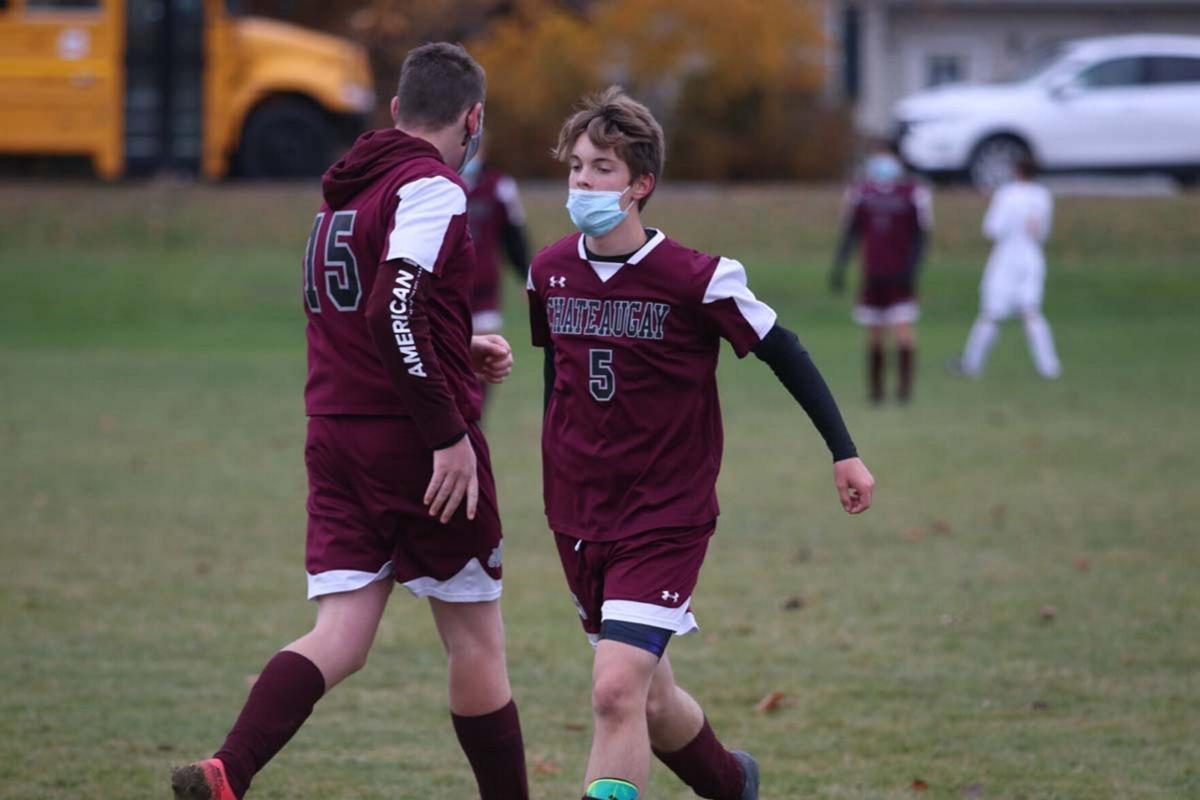 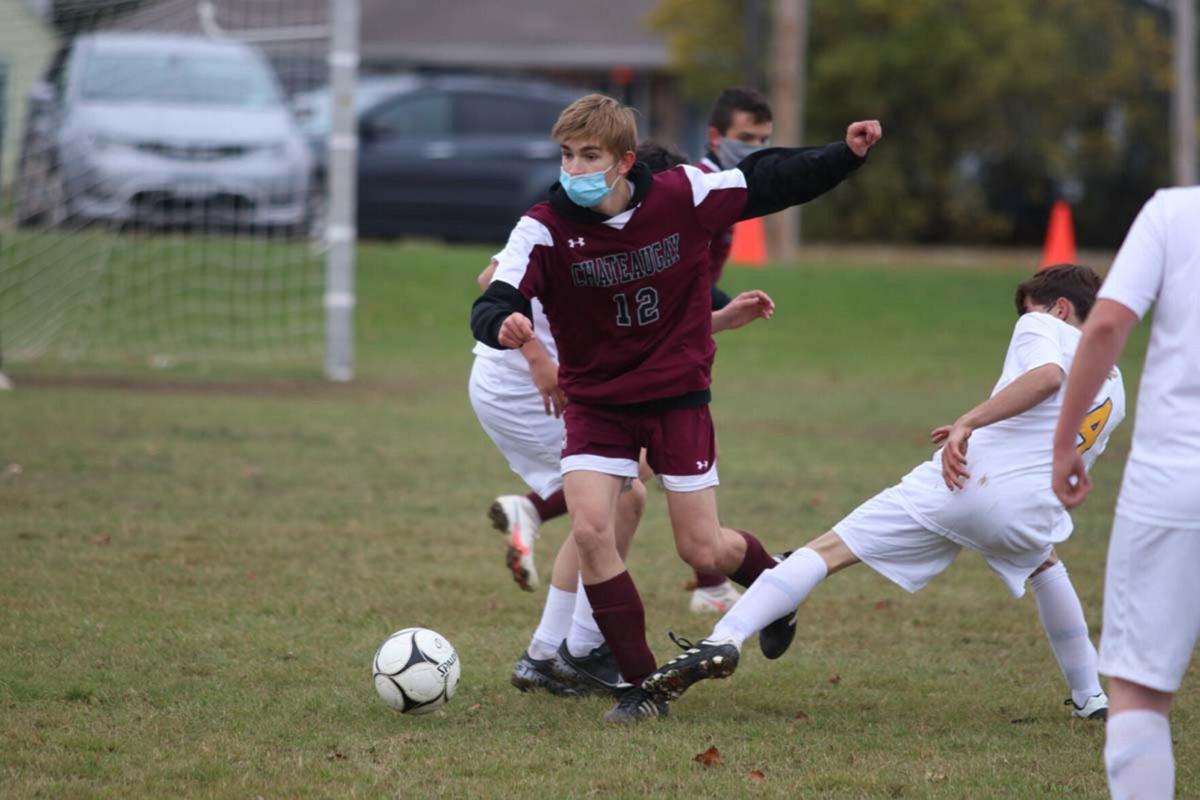 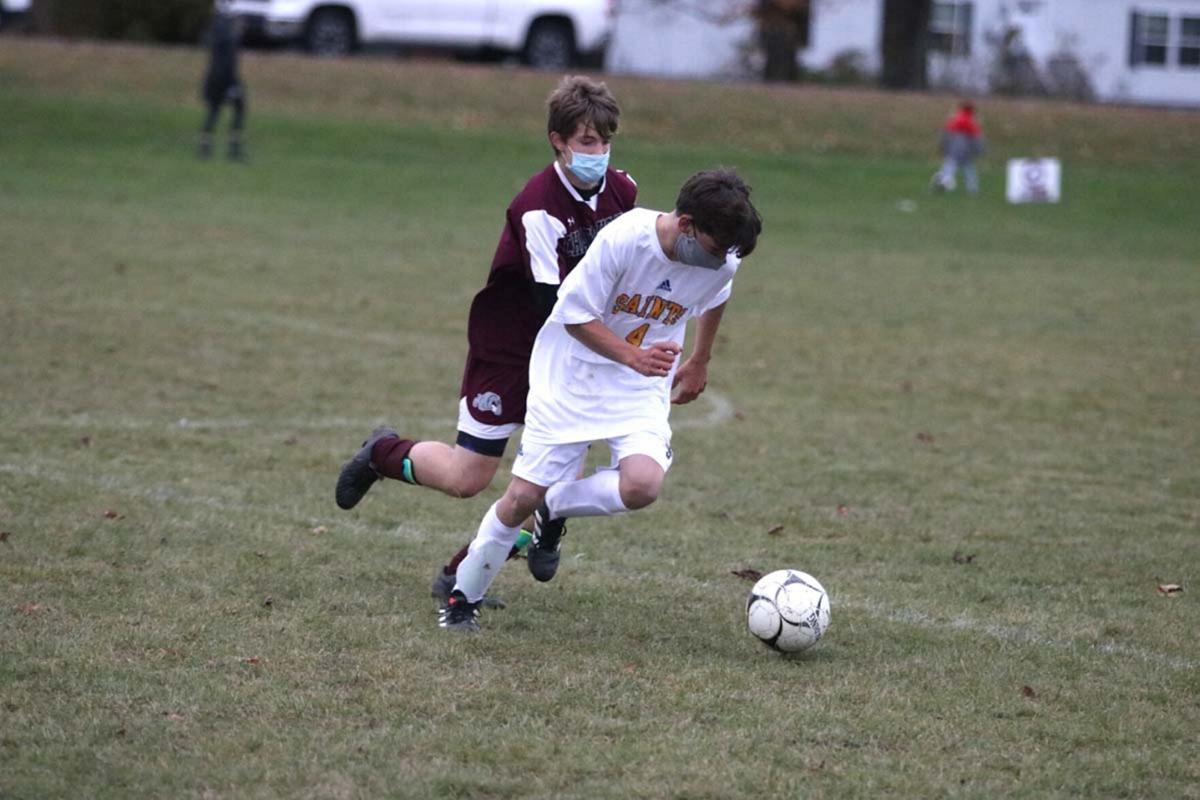 Arthur Greguire in a footrace with Stephan Dwyer for the ball. Evan Wheaton/Malone Telegram

Arthur Greguire in a footrace with Stephan Dwyer for the ball. Evan Wheaton/Malone Telegram

CHATEAUGAY – There was an early spark in the Chateaugay boys soccer team’s offense that set the Bulldogs off to the races.

Three goals were scored by the 13th minute against St. Regis Falls, which proved to be enough for the Bulldogs to blank the Saints, 3-0 at home Tuesday.

Walker Martin opened the floodgates by hitting Lucas Monette with a short pass up from the post to the middle of the box. Monette hit the go-ahead goal for the first score of the game.

“Once we got the first one, it opened up,” Chateaugay coach Ted Martin said. “Just getting the first goal, they had to open up a little more and the rest came a little easier after that.”

Nathan Harrigan proved to be a gut check for the Bulldogs.

With a nine-on-nine field, Harrigan was used in a more offensive role, when he’s typically a part of the defensive unit.

“He was kind of shocked when I told him to play up on line because typically he plays half and plays fullback too actually,” Martin said. “He kind of looked at me like, ‘Well, what do I do?’ and I said, ‘Go to the net, put the ball in the net.’”

Harrigan hit the ball in stride and banged a shot just inside the left post during the ninth minute for a 2-0 lead. Four minutes later, Jacob Johnston clicked with his new forward and set Harrigan up for another goal.

The Saints back line struggled to clear the ball, and Chateaugay capitalized on their opportunities early on.

“It was really a matter of putting a lot of pressure on them and getting on the board first because we didn’t want to get down by a goal and have somebody sit on it,” Martin said. “That was the point, go out and get one quick then relax a little.”

The other piece of the puzzle was possession time.

The Saints made good steals at midfield, but often times couldn’t get the ball out to their forwards. The Bulldogs dominated in shots on goal with 34, as opposed to seven from St. Regis Falls.

Derek Prevost registered 22 saves in net for the Saints. Alex Stout, who typically alternates halves with Owen Rockhill, remained on the field for both frames, totaling six saves.

Chateaugay was largely in control of the entire game offensively, providing good experience for Harrigan to step into a new role with a desired outcome.

Along with having roster depth and good bench rotation that the Saints can’t match, the new-look offense displayed Tuesday night is an example of how the Bulldogs have been trying to keep momentum going as they pick up their second straight win of the season.

“(We’re) just building on what we’ve been doing and just improving as we go along. Today is a little tougher (to do that), it’s kind of a gimme today, but still,” Martin said. “I preach the little things all game just to make sure we’re still marking up, we’re still doing the things that we have to do to win games no matter who we’re playing.

“It’s the little things I guess.”

Chateaguay girls soccer also defeated St. Regis Falls with a strong offense early on. Alison Johnston and Olivia Cook each had hat tricks in a 6-1 victory over the Saints.

“Ali (Johnston) and Liv (Cook) were able to put the ball in the net early and continued look for teammates throughout,” Chateaugay girls soccer coach Jason LaPlante said.

The first three goals for the Bulldogs were scored in the first 10 minutes –two of which were 31 seconds apart from one another.

“We came out of the gates strong today,” LaPlante said. “Our offense clicked and we were able to score goals early. We passed very well and finished our chances.”

Emily Arcadi scored off a pass from Kendra Richardson for the Saints in the second half. Every Chateaugay goal was assisted.

“I was really happy with how unselfish we were as the game moved on,” LaPlante said. “Everyone got to play valuable minutes and we were able to love people around to different spots. I think the kids had fun playing in the snow.”

Brushton-Moira boys soccer fell to St. Lawrence, 2-0 on the road.