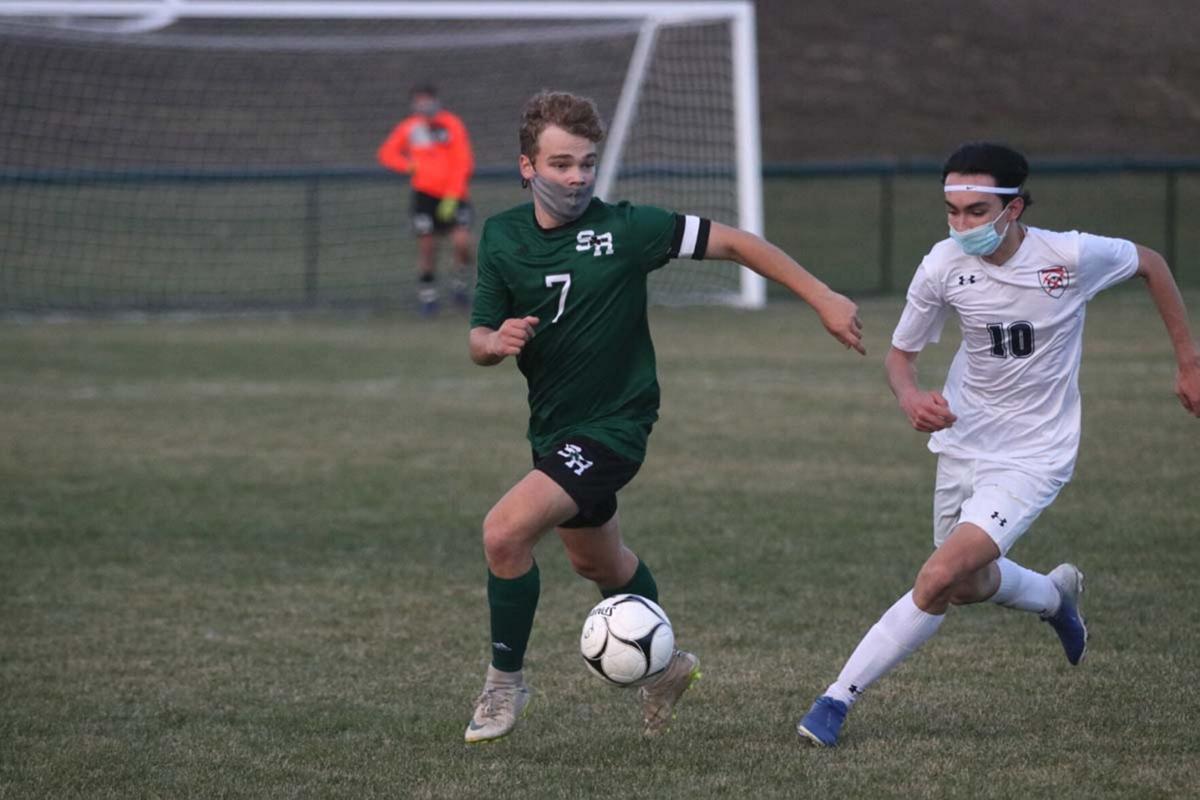 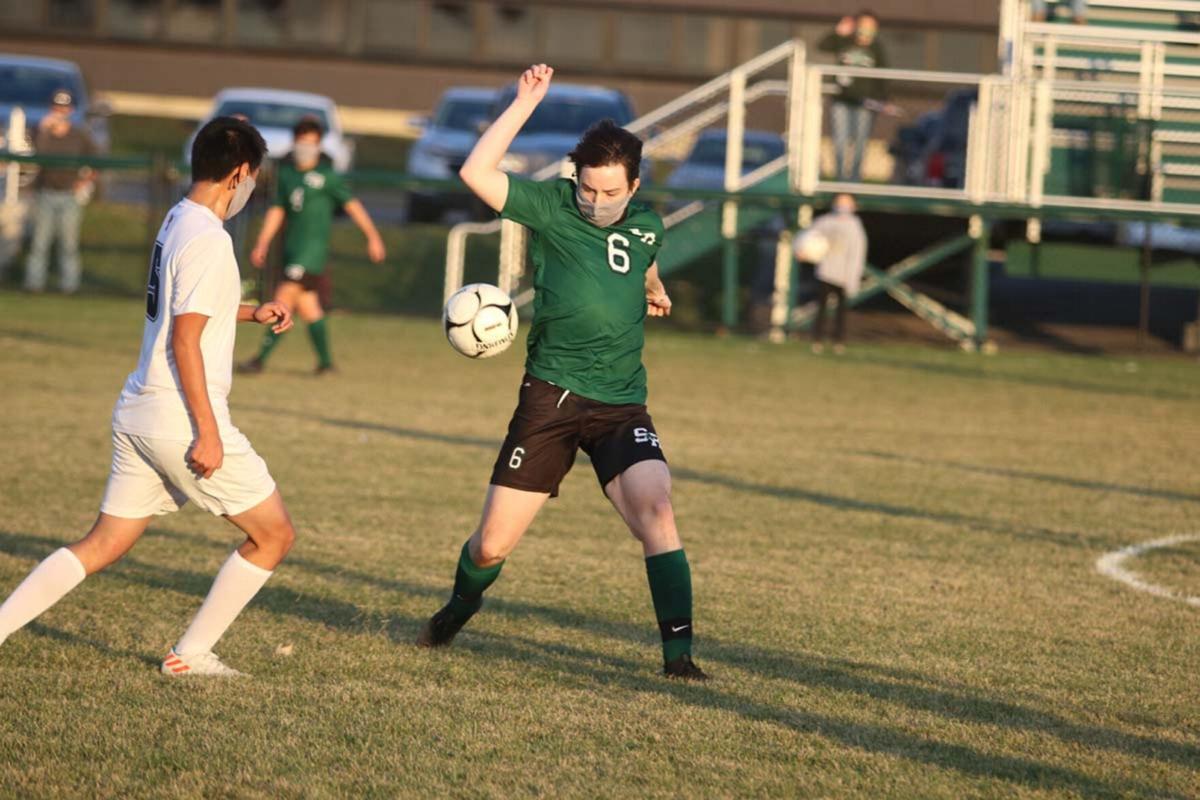 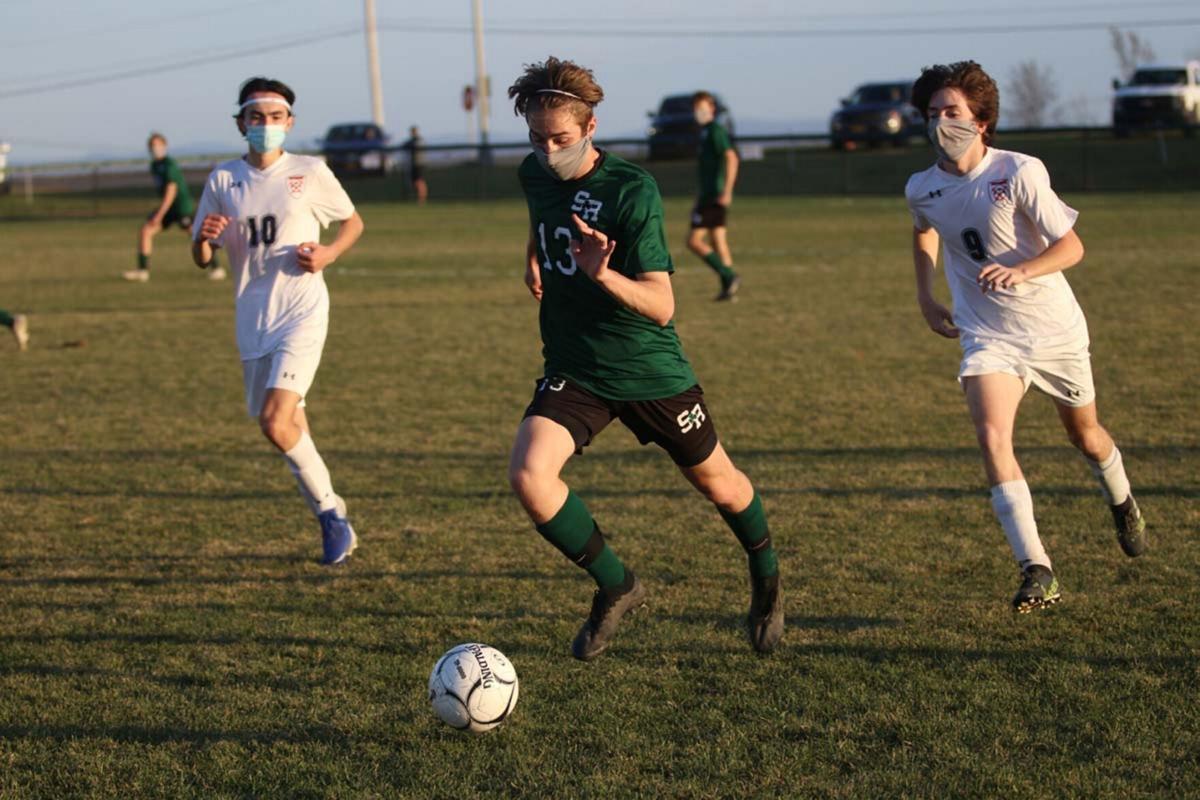 Jared Showen preparing to make a pass down the flank. Evan Wheaton/Malone Telegram 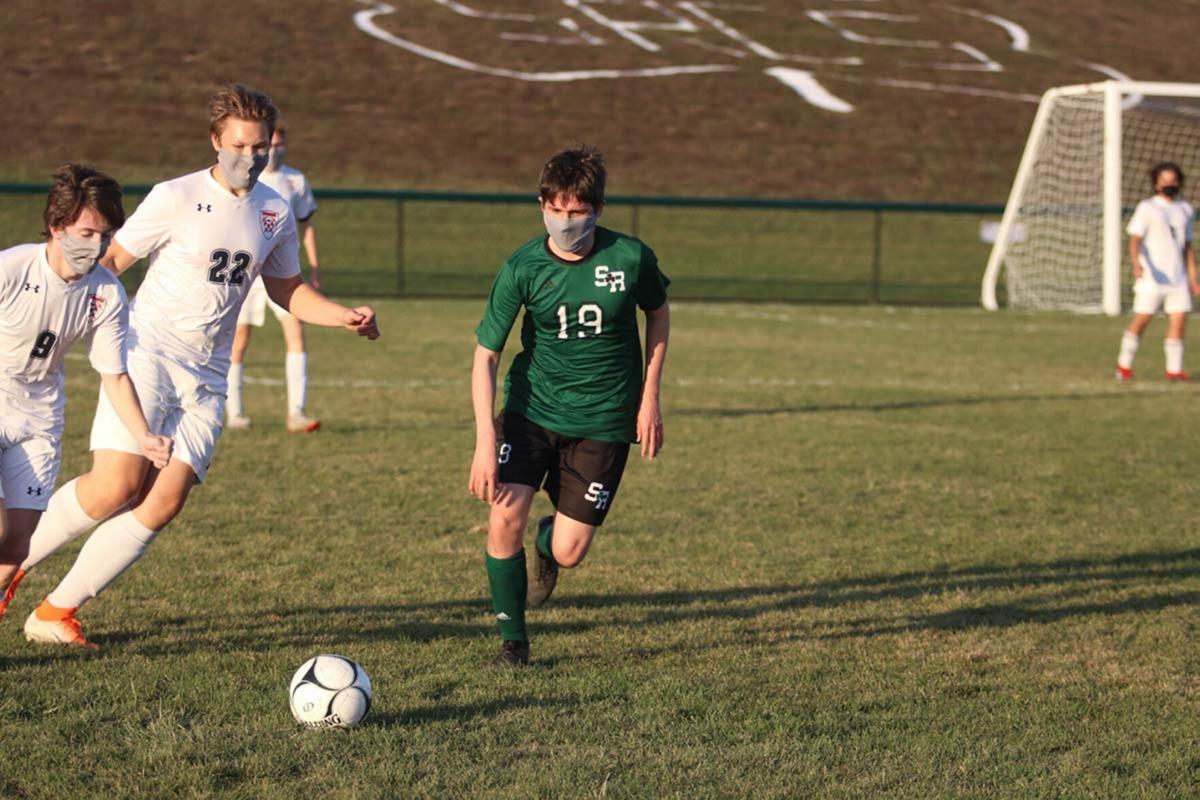 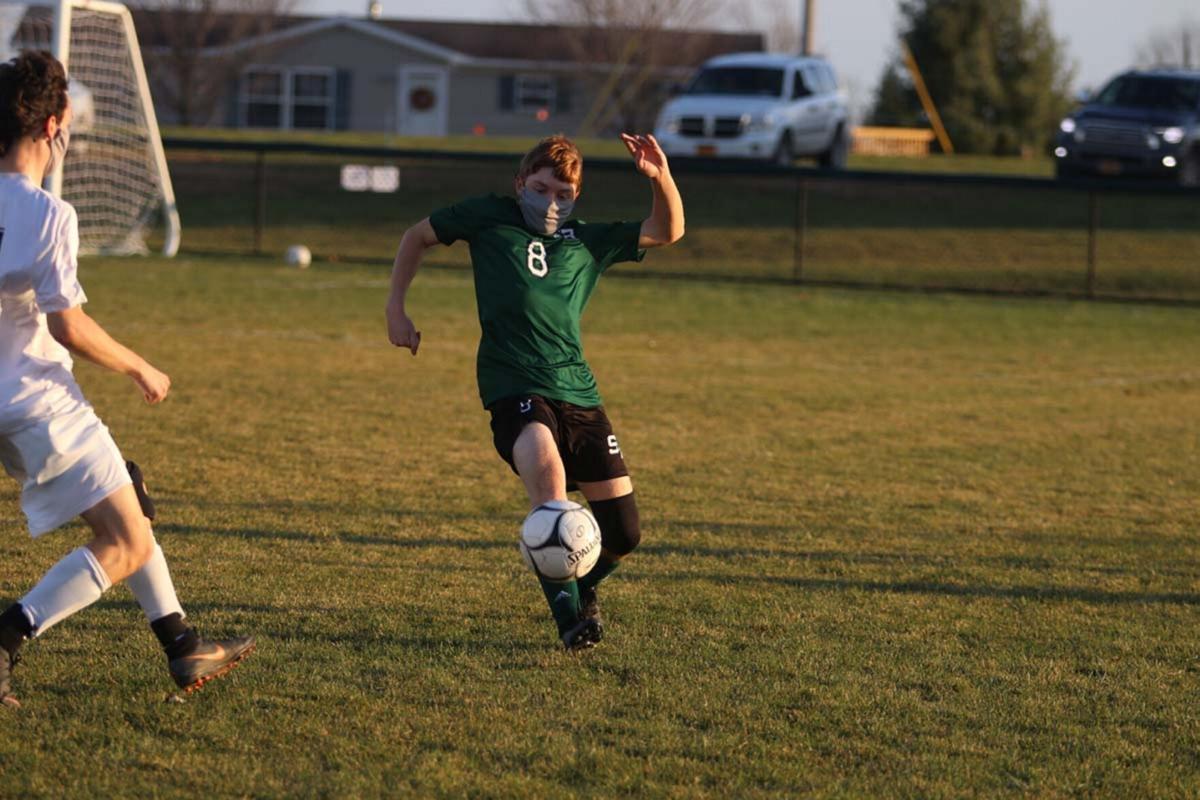 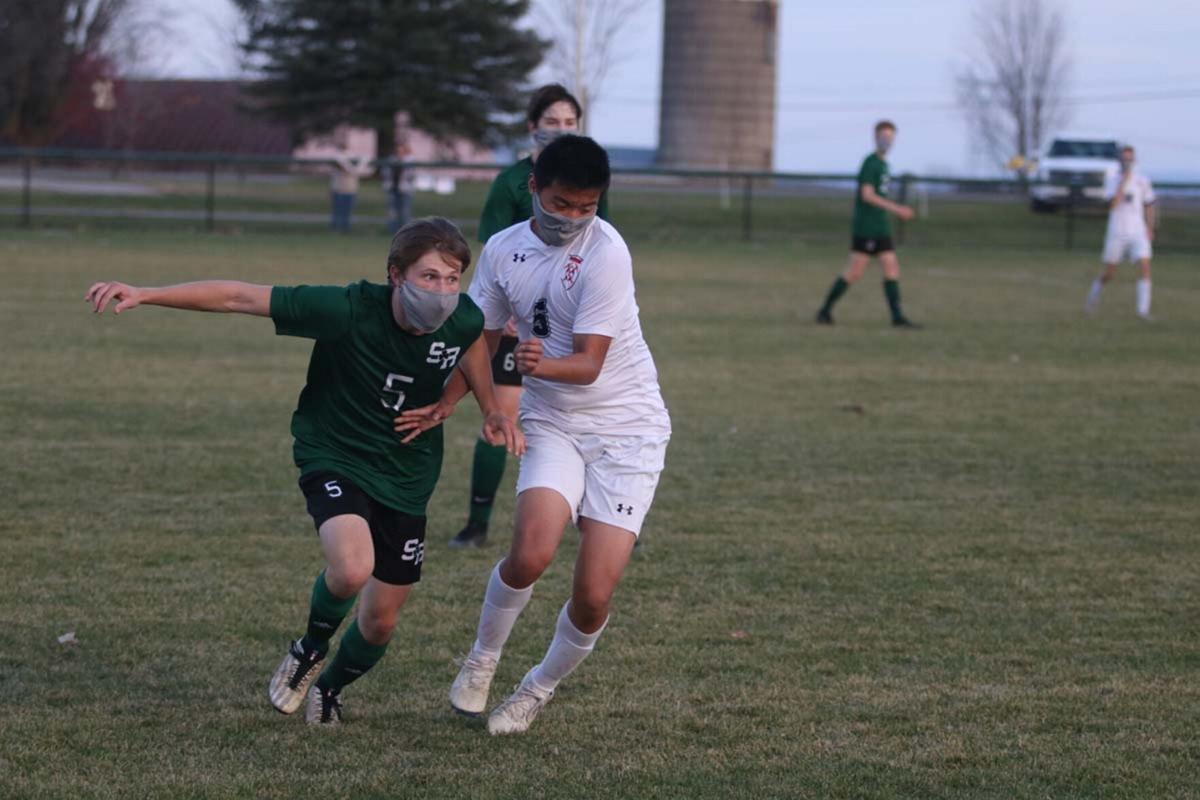 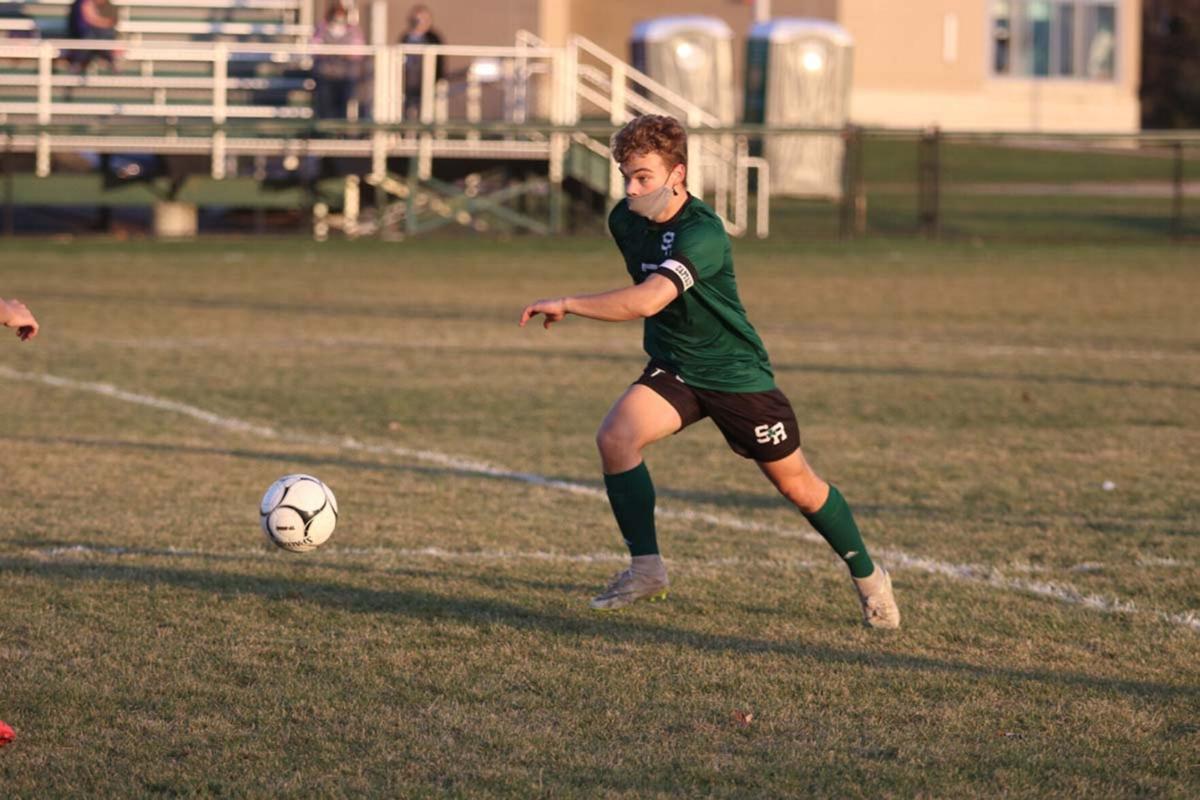 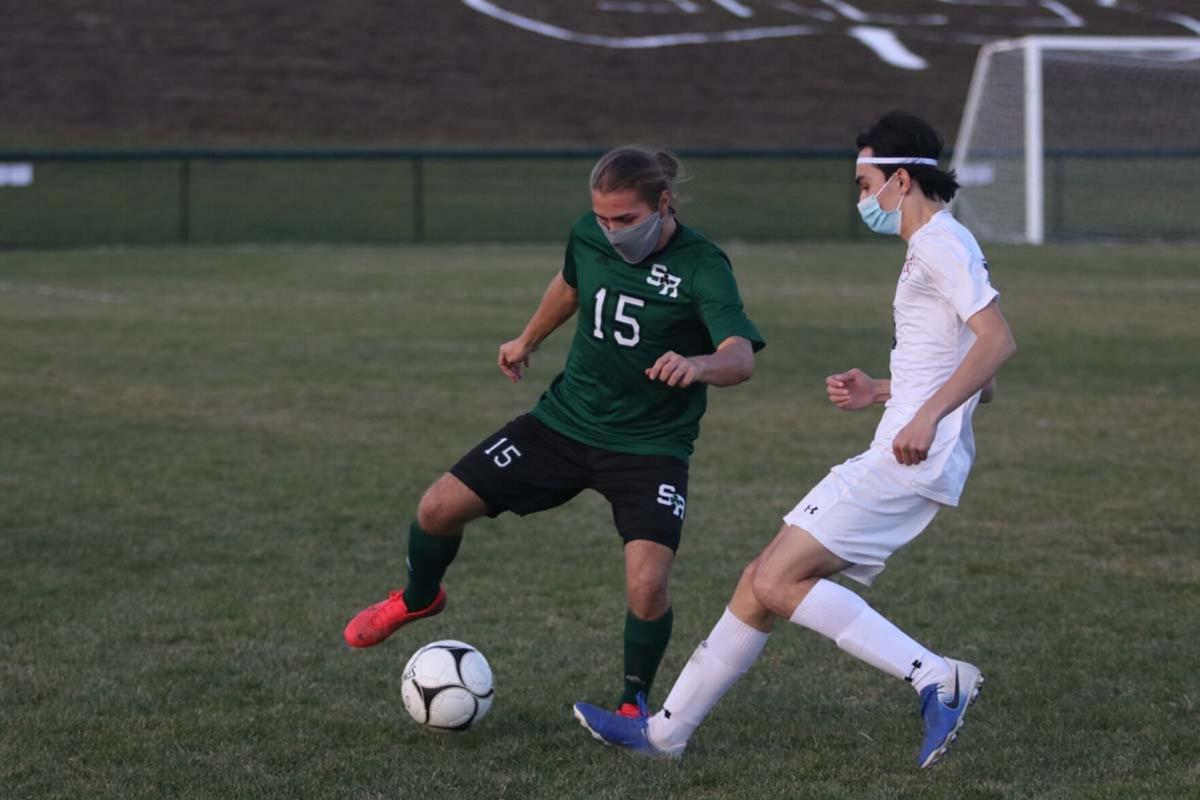 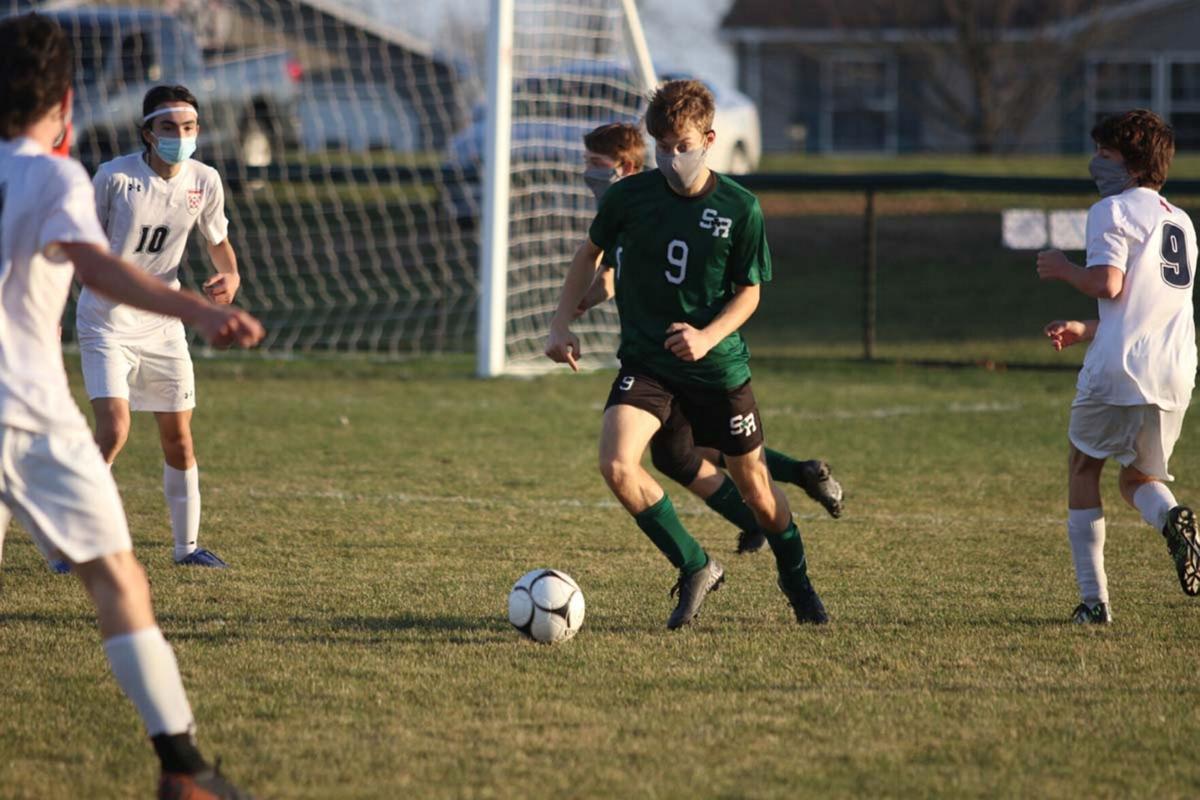 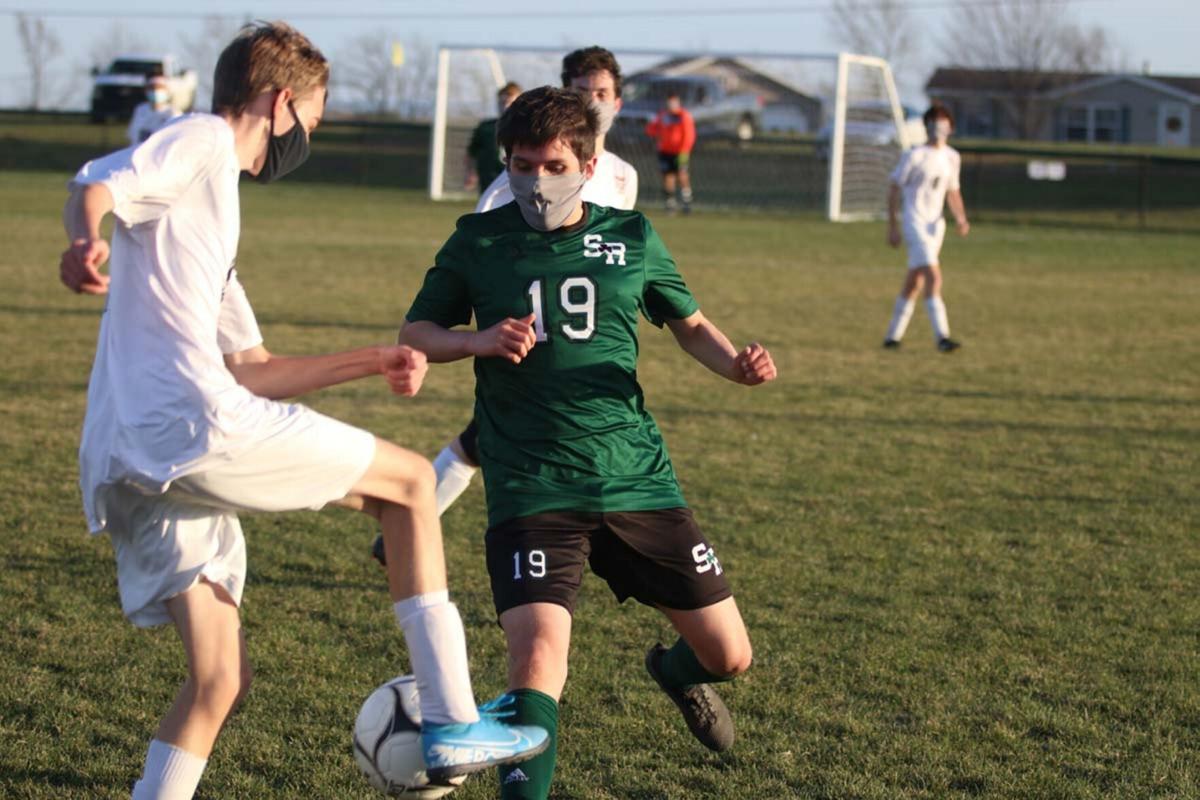 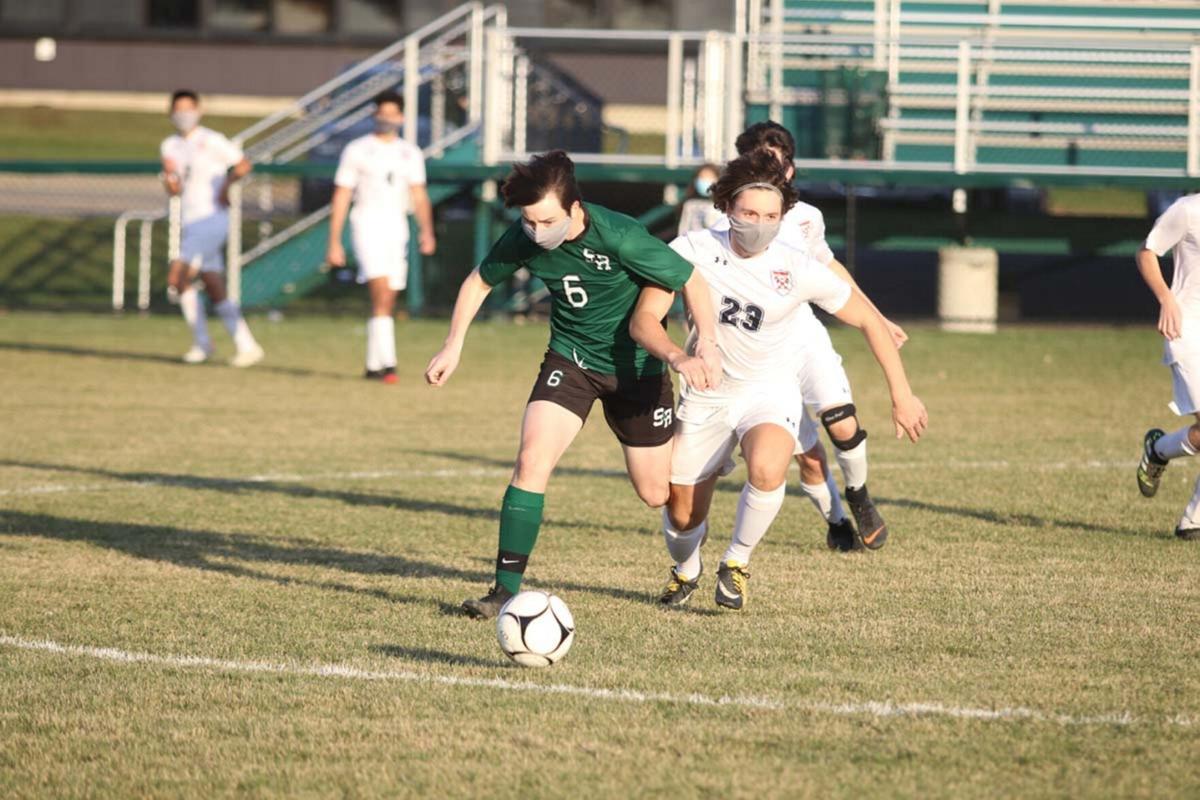 Gavin Cook-Avery in a footrace at midfield. Evan Wheaton/Malone Telegram 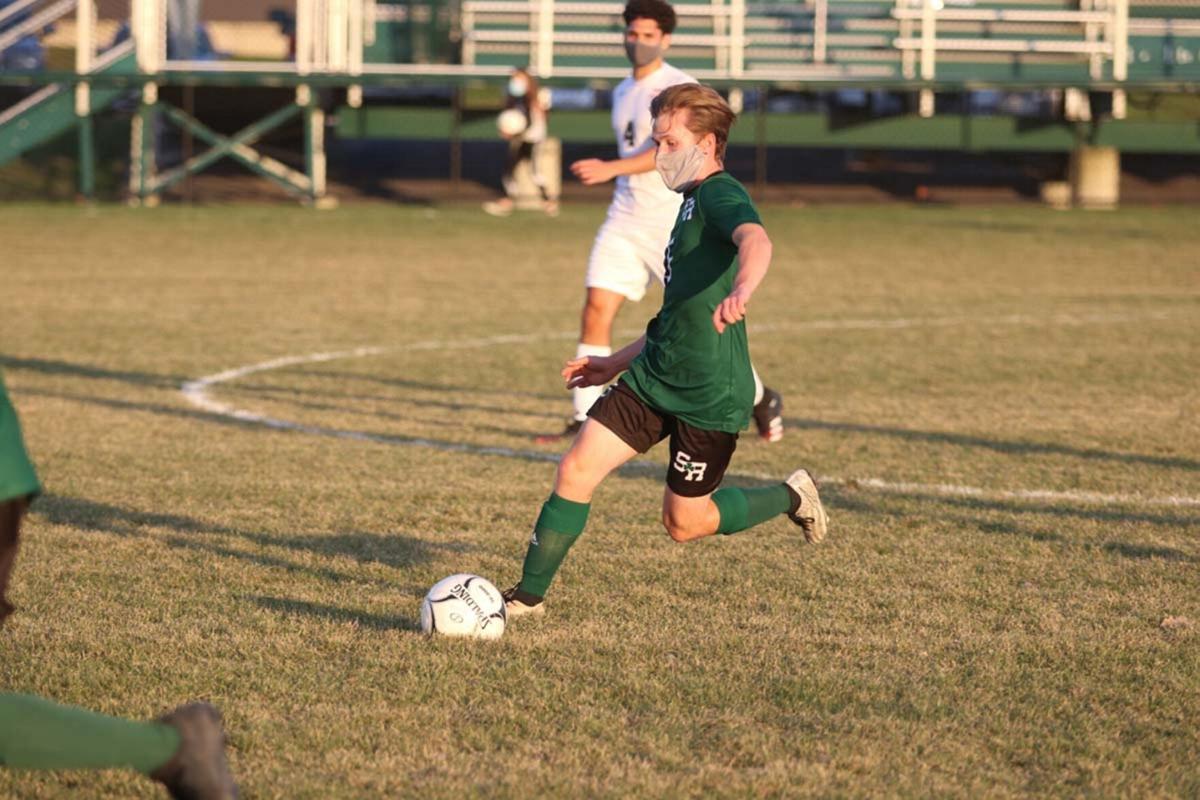 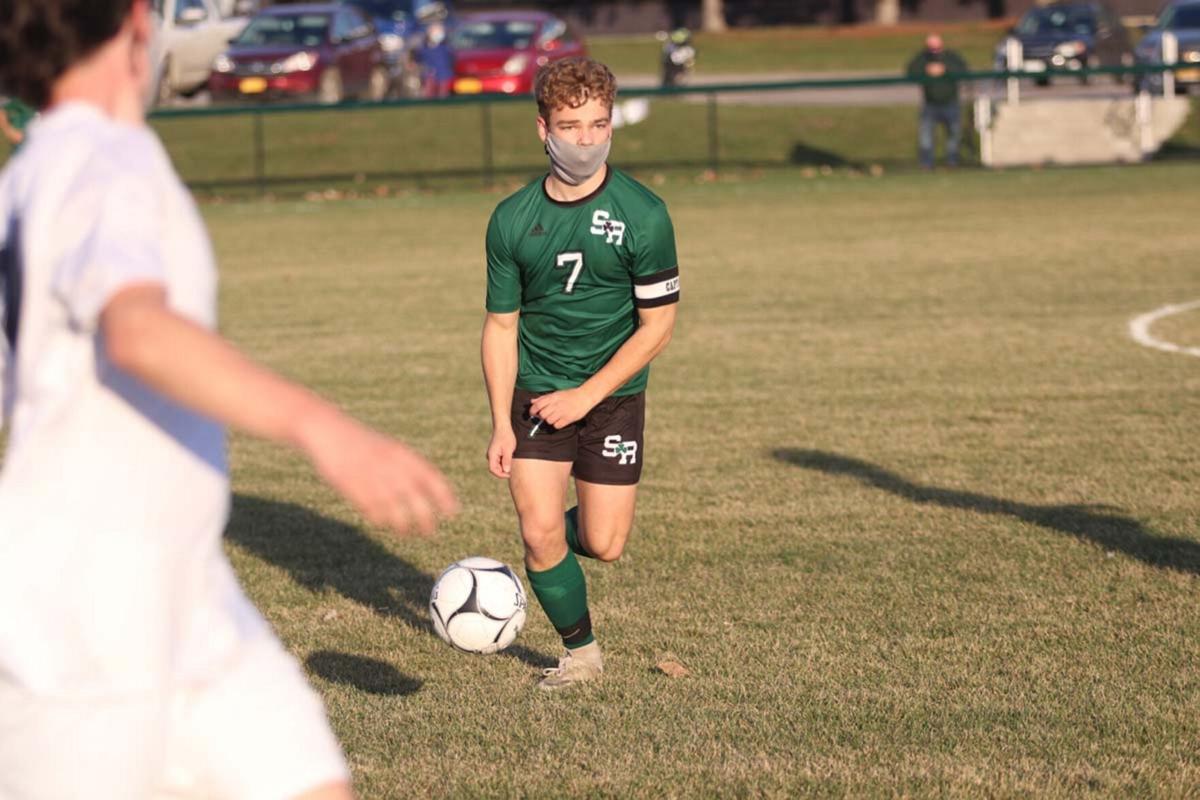 Jared Showen preparing to make a pass down the flank. Evan Wheaton/Malone Telegram

Gavin Cook-Avery in a footrace at midfield. Evan Wheaton/Malone Telegram

FORT COVINGTON – When your All-Northern defensive mastermind can find the net in a tight jam, things tend to pan out well.

In the 65th minute of the Salmon River boys soccer matchup against Potsdam on Thursday, the Shamrocks looked to PJ Ghostlaw, who was in at stopper.

“In practice, when we go to scrimmage, he’ll drop back and play defense all the time,” Shamrocks coach Tim Cook said.

With the game tied 1-1 with four and a half minutes left in regulation, Ghostlaw dropped back from the net. Gavin Cook-Avery sent a pass his way, and Ghostlaw struck the ball with his left foot, launching it to the top of the Sandstoners’ net.

“Coach (Cook) has been really getting on me all season to find gaps, and I was actually playing center mid all season and I just couldn’t find them,” Ghostlaw said. “He moves me back to defense and I find them, you know? I guess it’s my spot.”

Ghostlaw was a sweeper last year who’s since developed an eye for offensive play.

“He’s seeing where he can take the runs and I’ve got him in even more of a defensive position than he was playing, although not all the way back in the back,” Cook said.

Ghostlaw saw the run and made it himself, scoring his first varsity goal to lift Salmon River over Potsdam, 2-1 at home.

19’— Potsdam capitalizes on an indirect kick to take a 1-0 lead. pic.twitter.com/xz6DJykVAm

Despite the Sandstoners’ offensive struggles this season, Potsdam was on the board first after capitalizing off an indirect kick in the 19th minute.

Three minutes later, Kade Cook sent a shot from the right post and Donavan Lauzon headed it into the net to tie the game.

“I thought they (the Shamrocks) had some chances and they were pressuring, and I thought more theirs (Potsdam) came in the first half,” Cook said on the Sandstoners’ tempo.

Salmon River moved the ball well and matched Potsdam in each phase of the game. The Shamrocks often had drives up the middle with Jared Showen and Owen Gray, and found looks on the wings.

“I thought our short passing game was really good, and I thought we were pushing it when we shouldn’t,” Cook said. “What we say at practice all the time is, ‘Take the simple pass every single time.’ Sometimes you want to do too much and you don’t need to. Just move it when you have the opportunity.”

And Salmon River found plenty of opportunities after the break.

Following a tightly contested first have that saw good shifts from both offenses, the Shamrocks largely controlled the second frame.

“Fighting through balls and finding a lot of simple passes, and people are there now that we weren’t finding before,” Ghostlaw said on the increased possession time.

Ansen Herrick was the anchor that kept Potsdam in the game. Facing 42 shots on goal, Herrick came up with 26 saves at net for the Sandstoners.

“Obviously their goalie was amazing, so it was really tough to get by him,” Ghostlaw said.

John Miller came up with three saves in net for Salmon River.

The Shamrocks outplayed the Potsdam back line throughout the entirety of the second half while Salmon River’s midfielders won the 50-50 ball time and time again. But Herrick was a force at the net, denying almost every scoring opportunity thrown his way.

The long ball to Cook, Levi Pyke at striker driving it to the post and transitions off corner kicks weren’t enough to pierce Potsdam’s steel curtain at goal.

Not until Ghostlaw found a gap and made his run.

“This year we moved him up into the midfield and he’s asked to be more offensive,” Cook said. “He’s not always offensive, and he’ll tell you that.”