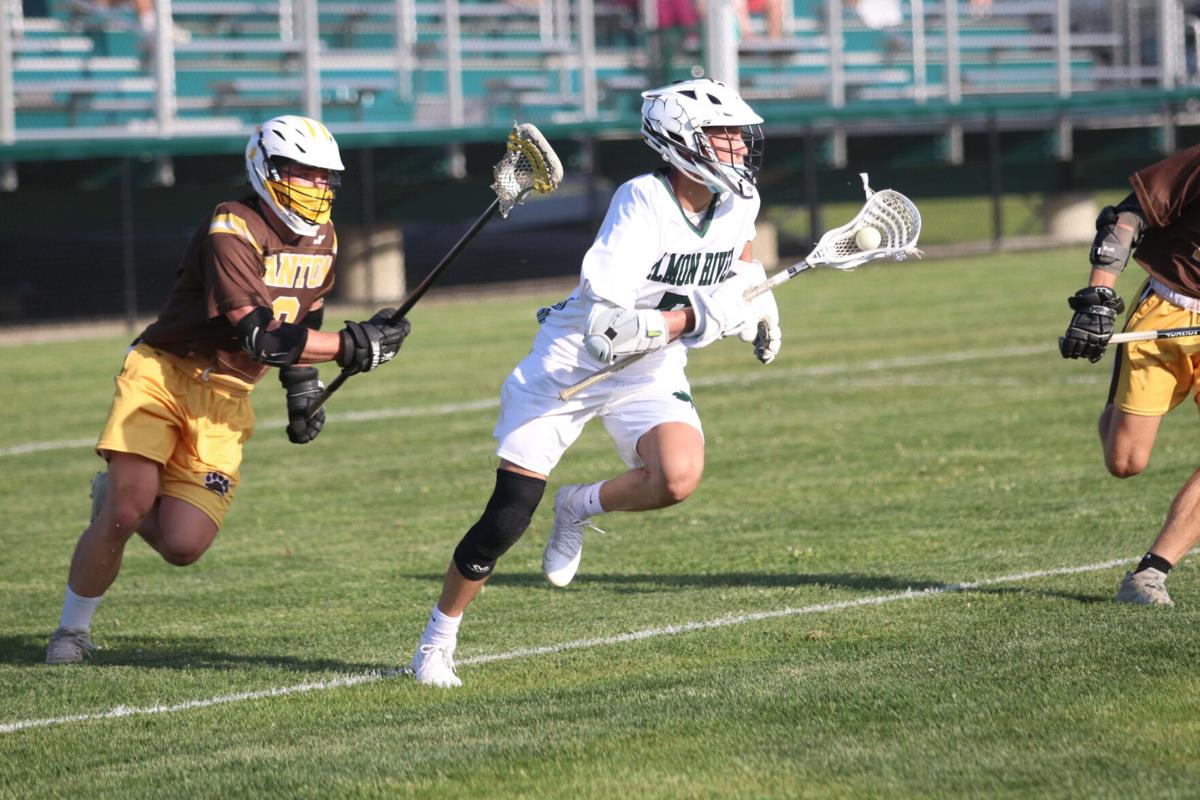 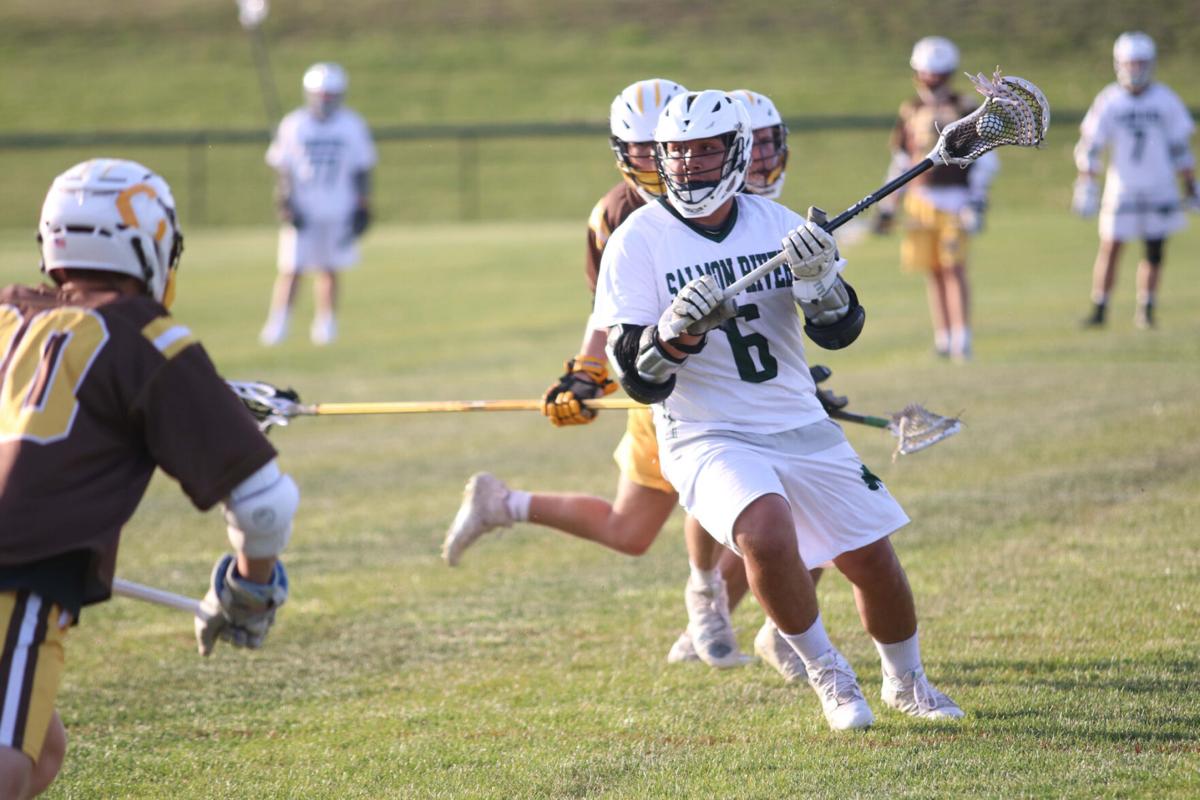 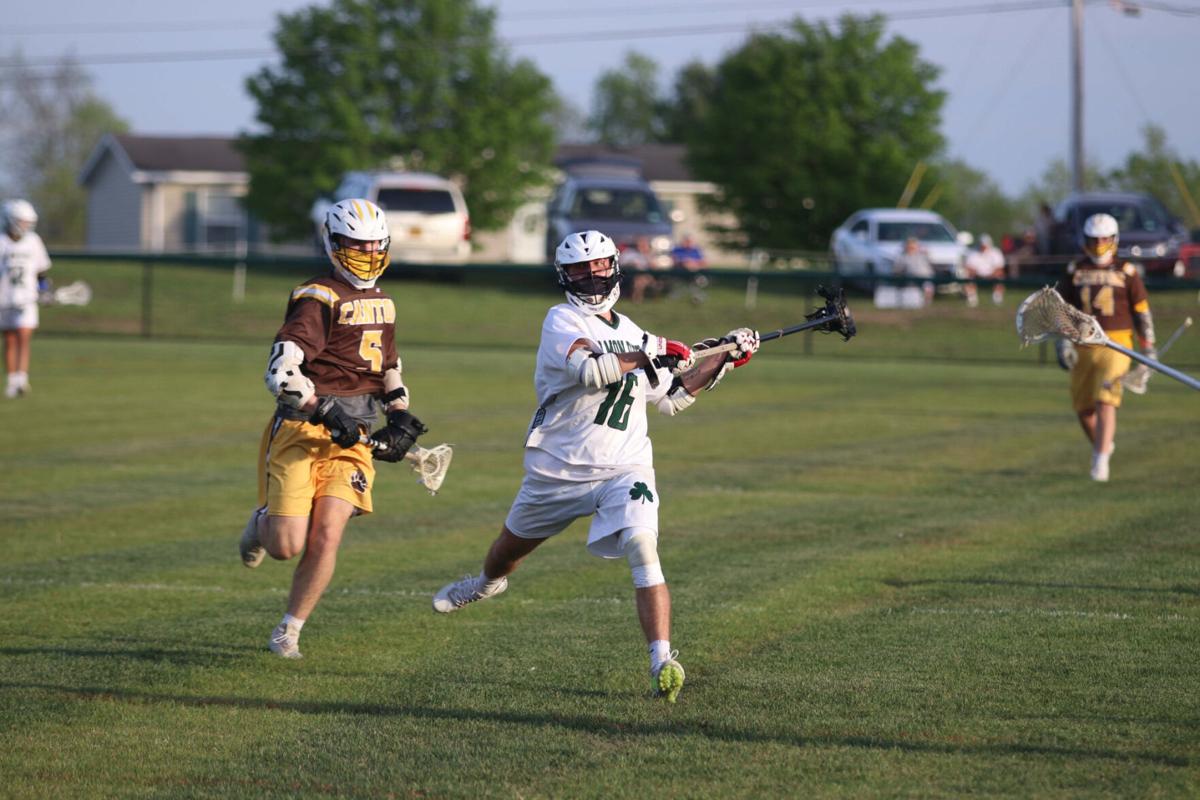 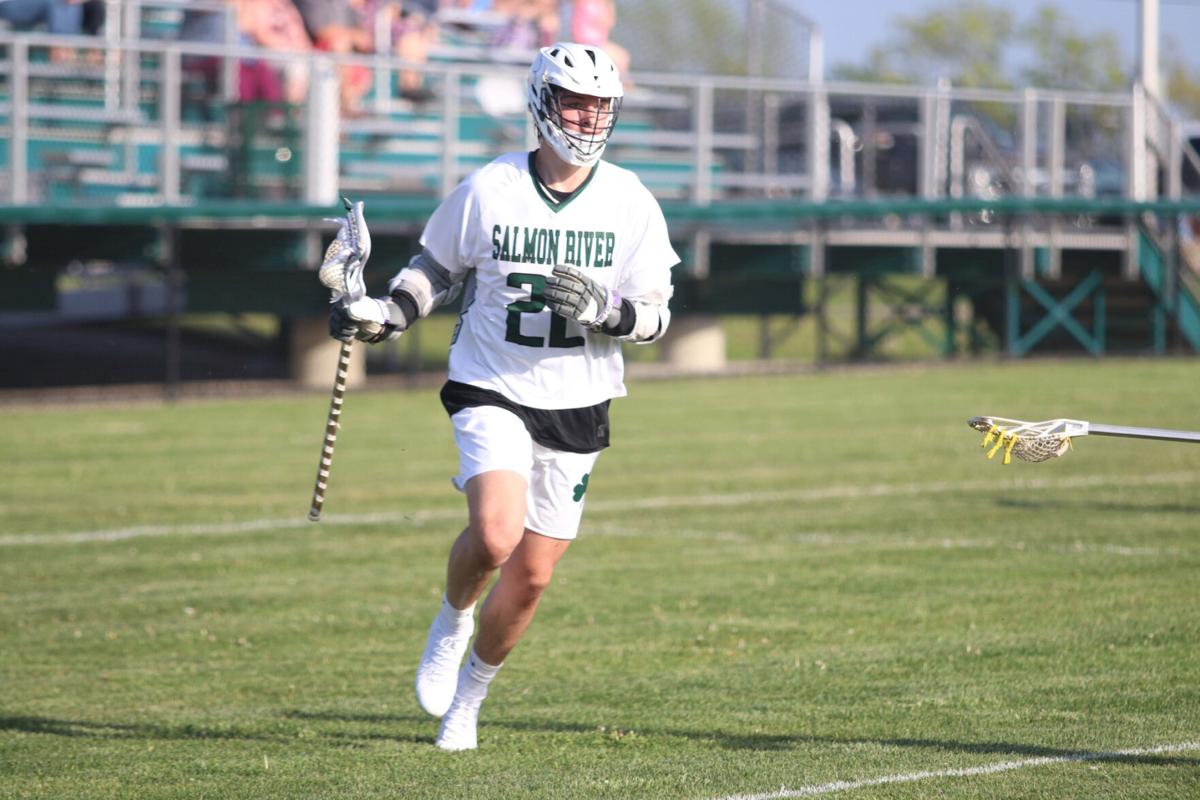 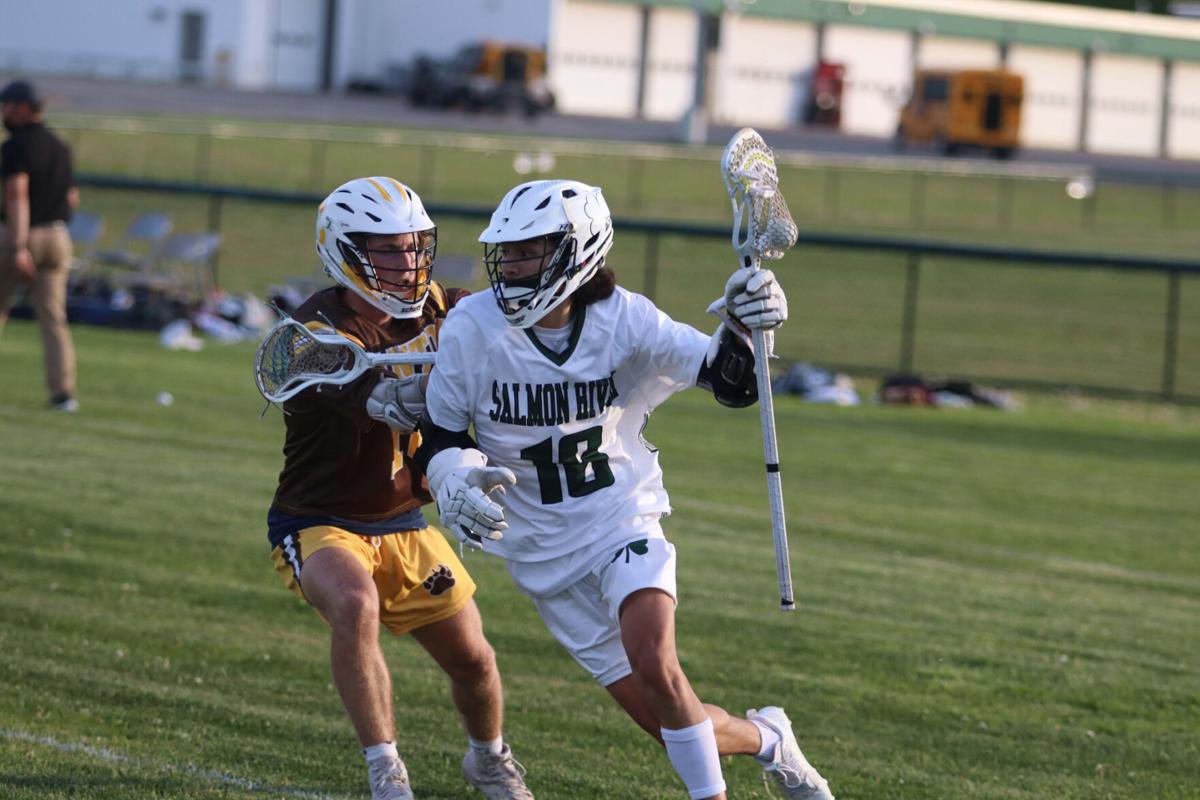 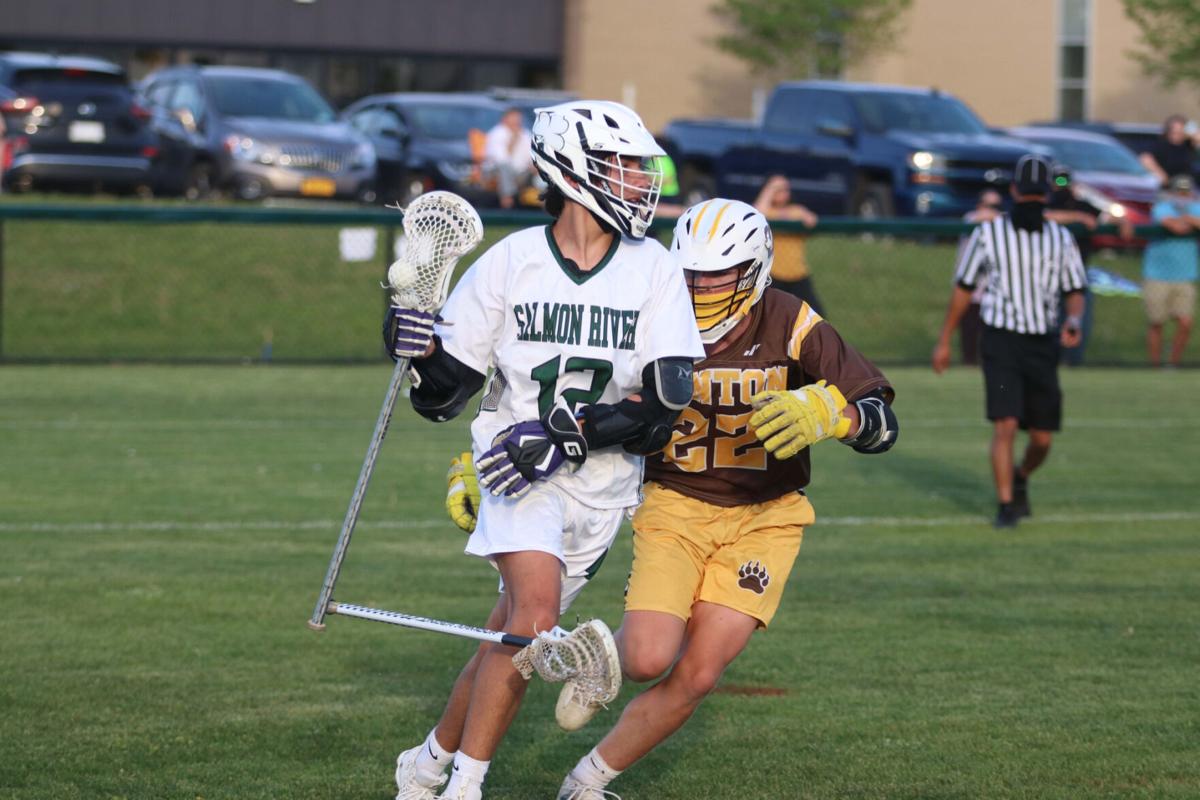 FORT COVINGTON – Salmon River boys lacrosse lost to Canton in their first matchup, 9-6 to open the spring season. That was two weeks ago.

On Wednesday, the Shamrocks had something they didn’t have the first time around.

“We got all our guys back,” junior attackman Hawi Cook-Francis said.

A pair of junior defensemen – Warren Oakes and Tryton Benedict – joined the fray, and helped lead Salmon River to a 12-5 win at home.

“We knew what (the Golden Bears) had, so we knew what they had to shut off and (the Shamrocks) just played it perfectly,” Salmon River coach Jim Barnes said.

Q1: 2:17 — Crayton Cree nets one, 5-0 Shamrocks.Salmon River is taking shots from right outside the crease. pic.twitter.com/CxkFSmwdGO

Cook-Francis netted a pair of goals and made one assist. Ryan Oakes and Benedict scored a goal apiece. Senior midfielder Tahnaokata Elijah led with a hat trick.

“We definitely ran our systems well,” Elijah said. “That’s what we didn’t have in the first game, we didn’t run our system, so we were running out there like chickens with our heads cut off. This time we knew what we were doing the whole time.”

Crayton Cree (one assist) and Mason Cree each made a pair of goals, and Carey Terrance netted one as well.

The Shamrocks (6-1) flew out to a 6-1 lead in the first quarter, and Salmon River’s defense remained solid with its numbers at full strength, holding Canton (6-2, 6-1) to just two goals in the first half. The three-goal difference from the season opener wouldn’t be repeated, if the Shamrocks could do one thing.

“Play every game how we played all year. The scoreboard was the result,” Cook-Francis said. “We were good offensively (and) defensively. We got a lot of good possessions on offense and moved the ball well.”

Down 8-2 at the half, the Golden Bears came into the third quarter looking to put something together offensively. This was made easier for Canton with plenty of man up opportunities that were often capitalized on.

Nolan Bombard (two goals) and Aidan Hoose (one goal, one assist) began to generate production in the Golden Bears’ attack zone. Though Terrance and Cook-Francis kept the Shamrocks in good shape with ground balls and goals, what was a defensive front on one end became a back and forth.

The flags kept flying – for both teams – though the Golden Bears cut it 10-5 as a result.

“We took some penalties that we shouldn’t have taken,” Barnes said. “Any time you get a good team like Canton, man up opportunities – they’re going to put the ball on net. And they did, I think they scored like four straight goals on man up, so that was tough for us to take.”

Q3: 6:59 — Canton called for unsportsmanlike conduct, Cook-Francis nets one on the man up.Shamrocks up 10-3. pic.twitter.com/6v7SRJBcXG

While both teams found the net three times each in the third frame, Elijah scored the lone goal of the fourth quarter with 49 seconds remaining.

“I thought the boys responded well. The boys got possession of the ball. That’s the key, we’ve been focusing on that, possessions (and) ground balls,” Barnes said. “I think we did a great job with that today.”

Saka Thompson made 16 saves in net for Salmon River. With the win, the Shamrocks gained equal ground with Canton in the Section 10 standings. A tournament rematch would be quite the spectacle.

“They’re the ones that took the zero from us, the undefeated (record),” Elijah said. “The boys wanted to come in here and just get at it and show them who we really are.”