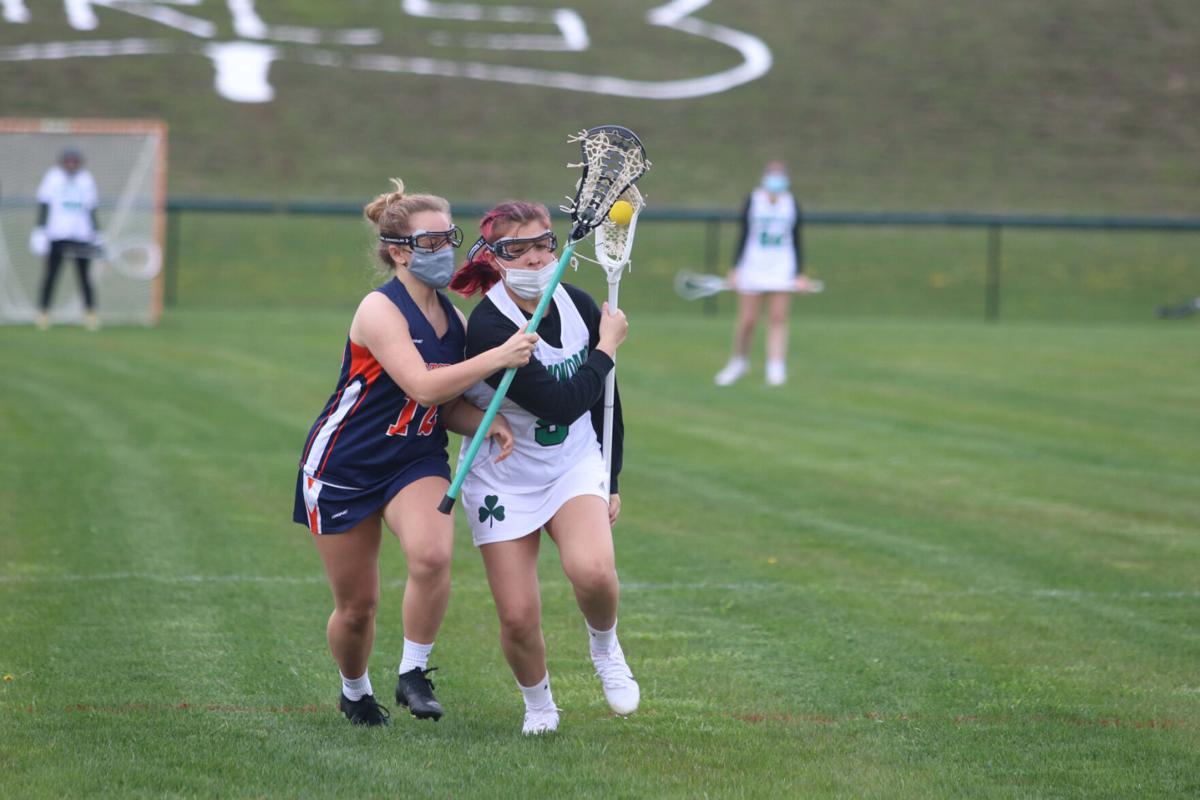 Salmon River's Aiyanna Bearshield, right, moves the ball past a Potsdam defender and into the attack zone. Evan Wheaton/Malone Telegram 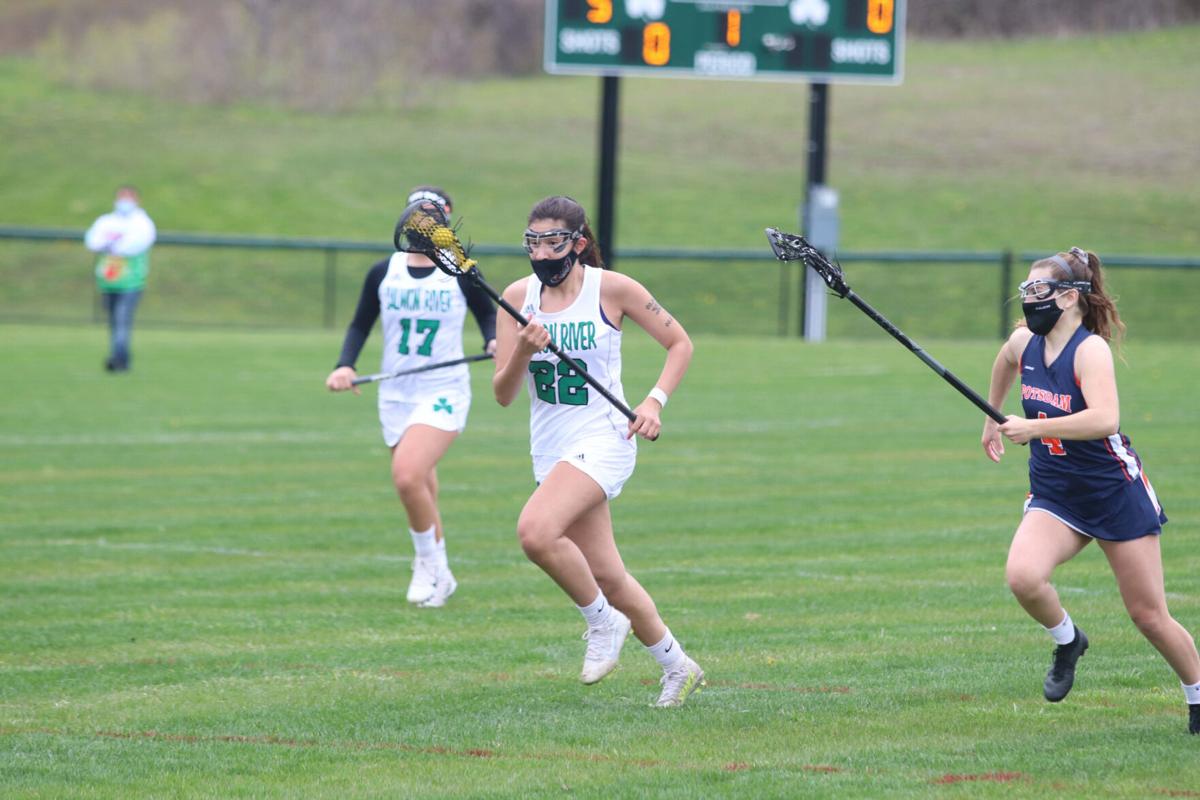 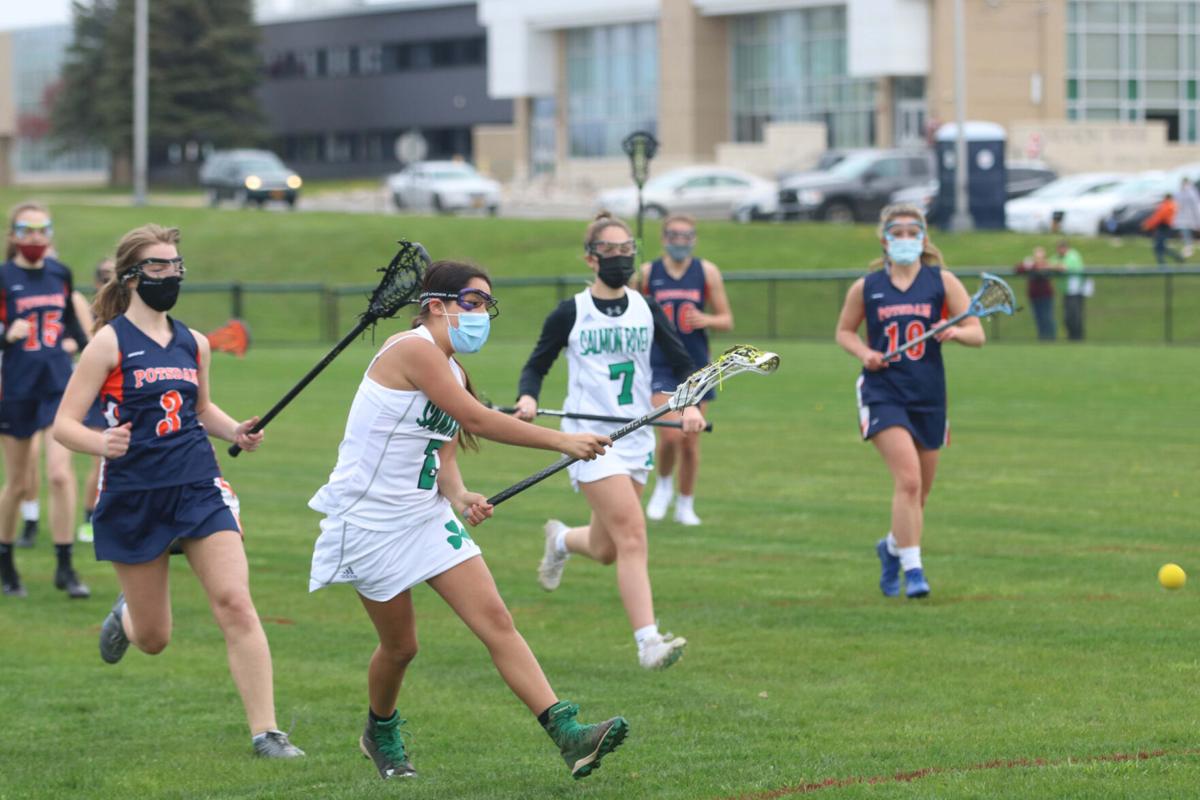 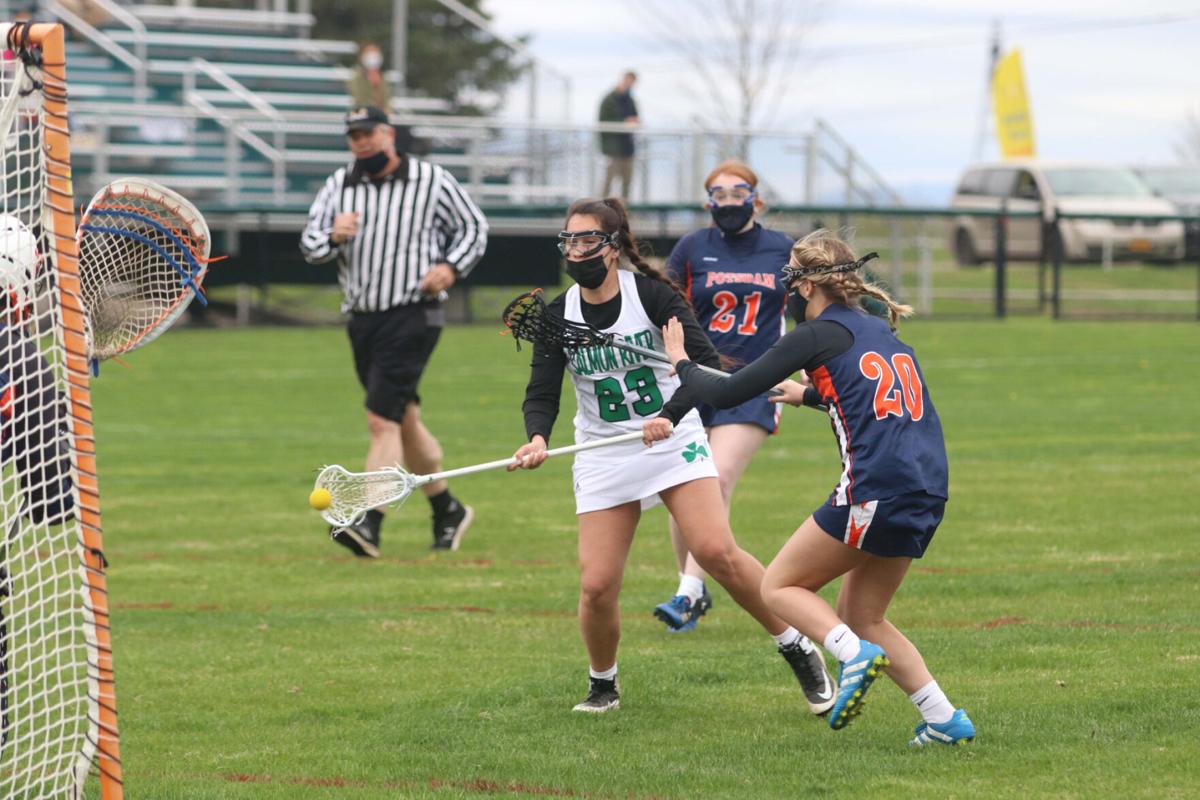 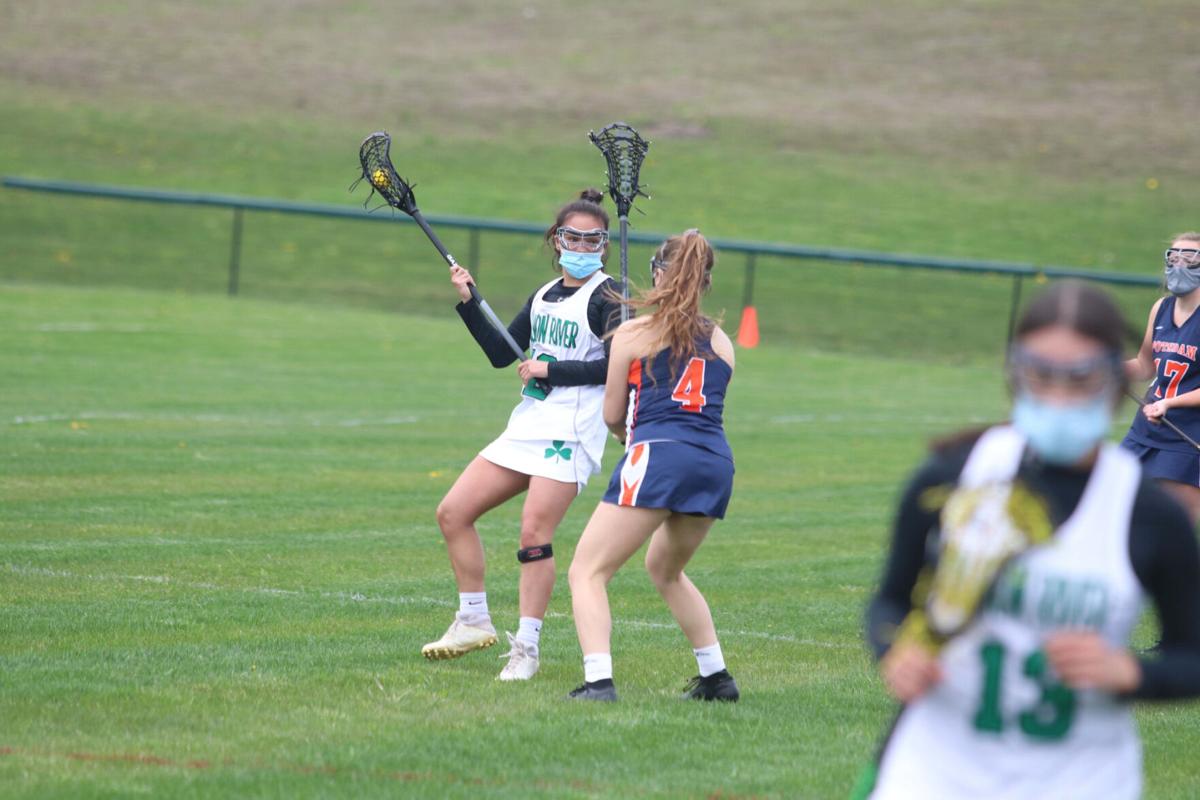 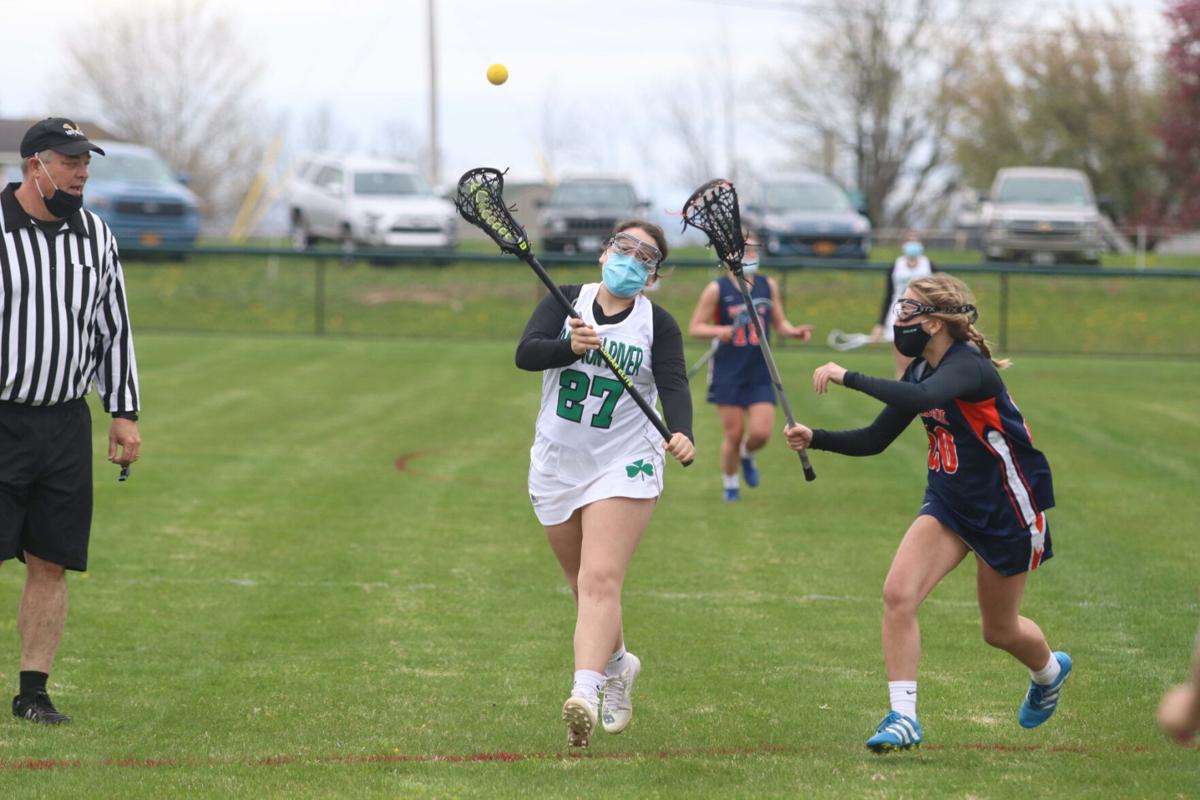 Salmon River's Aiyanna Bearshield, right, moves the ball past a Potsdam defender and into the attack zone. Evan Wheaton/Malone Telegram

Arms folded, he watched the Salmon River girls lacrosse team warm up before its first match since 2019. And what a season 2019 was.

LaFrance coached the Shamrocks all the way to a regional loss against Skaneateles. It was the furthest the program made it in the postseason. The roster was ready to push further the following year, get back to that stage and potentially go beyond.

Then the pandemic hit. The season was over before it started, along with the rest of spring sports.

“We were robbed last year,” LaFrance told his team in the pregame huddle.

The moment Salmon River took the field on Tuesday, the revenge tour started. And it began with a 22-3 statement win over Potsdam at home.

Since there isn’t a state tournament, the most the Shamrocks (1-0) can do is win out Section 10. Is that the short term goal?

“Of course. You’ve seen what happened tonight,” LaFrance said. “I let up. We could’ve been a lot worse, but everybody got to play. I got 21 girls, 21 girls played different positions. Right now, even though it’s just our first game, we look like a well-oiled machine out there tonight.”

Eleven players found the back of the net for Salmon River. Teya Mitchell posted a game-high four goals, all late in the second half. Joryan Adams, Ariyah LaFrance, Gracie King and Kaia Swamp all scored hat tricks.

What stood out about the high-scoring affair – aside from spreading the wealth – was communication on the field in the Shamrocks’ attack zone.

“(Potsdam) had a lot of girls that were wide open most of the time,” Adams said. “Some of us didn’t notice it at first, but we did pretty good that first part.”

First-year goalie Kimora Swamp made a save on the Sandstoners’ opening possession, followed by a successful clear. Swamp finished with three saves in her varsity debut.

LaFrance sees a lot in the young goalie, and believes she has a high ceiling.

“I think she can definitely be an All-Northern. She’s not afraid of the ball,” LaFrance said of Swamp. “Usually she doesn’t like to wear shin pads, but I make her for game time. You’ve seen what she can do. She can clear the ball, she’s not afraid of the ball – that’s one of the things about being a goalie, you have to be a little bit odd – and she’s very good at it.”

Salmon River scored on its first six possessions. Facing a 9-0 deficit, Potsdam (0-2, 0-1) didn’t get on the board until 7:03 was left in the first half. Kennedy Emerson (two goals) and Sophie Compeau (one goal) accounted for the Sandstoners’ scoring.

“I like to run a run-and-gun offense,” LaFrance said. “If you can get up the field and you can stay ahead of the ball, you got a good shot of getting a shot on net.”

This was illustrated by King tearing through midfield, getting separation on attack and ripping a shot past Potsdam goalie Katelyn Davis (six saves).

“You saw that tonight, our transition was very well. One, two, three passes and we’re at the net,” LaFrance said.

H2: 23:42 — The scoring keeps on coming after the half. Kaia Swamp with her second of the day to put Salmon River up 15-1. pic.twitter.com/fGtzoWPJmF

Most of the roster has been playing from a young age, starting out with the Akwesasne Ride youth program. Four players – Kaia Swamp, Ariya LaFrance, Kakwenies Mitchell and Bearshield – all scored their first varsity goals.

The Shamrocks – having players who can fill multiple roles at midfield, defense and on attack – were able to create scoring plays with anyone, and paced their time on attack well.

“We did pretty good with the possession and a lot of our players got their first varsity goals today too. I think we did a lot to try and get them the ball and try to get the back of the net,” Adams said. “Some of them didn’t get it today, but I’m sure they’ll get them another time.”

The race is on to get back to the Section 10 title game. Though a return to a regional match is still beyond the immediate future, Salmon River is already well on its way back to making noise in the playoffs.