Sign Up
Log In
Purchase a Subscription
You are the owner of this article.
Edit Article Add New Article
You have permission to edit this article.
Edit
Home
News
Sports
Obituaries
Local Living
Opinion
Calendar
Archives
Ads
eEdition
More
Share This
1 of 5 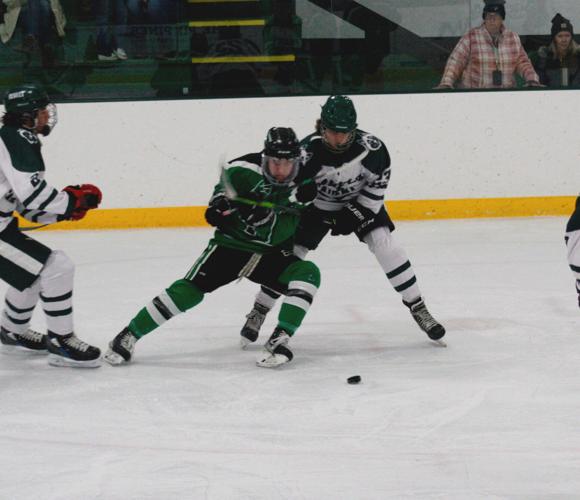 Salmon River’s Evan Collette drives to the net while fending off the check from FA defenseman Denali Boyea-Woodward during the first period of the NAC Division II opener at the Malone Civic Center on Saturday. The SRC senior logged two goals and set up two others as the Shamrocks opened up defense of their 2021-22 title. John Gokey/Malone Telegram 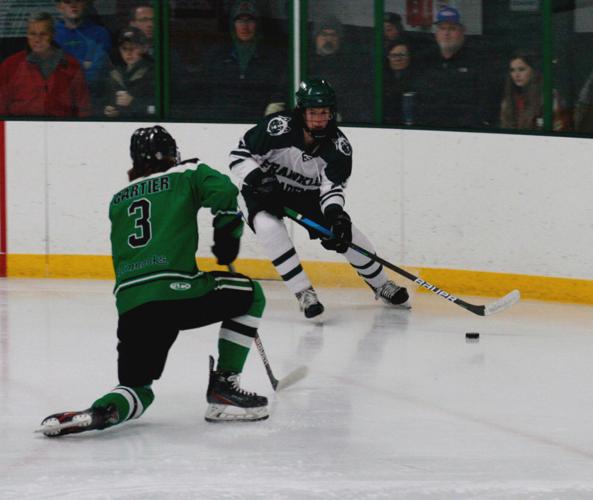 Franklin Academy’s Brock Spaulding looks as if he will pass the puck out of the corner against the defensive pressure from Salmon River’s Caiden Cartier (3) during the second period of the NAC Division II opener for both teams on Saturday. Instead, Spaulding faked the pass, skated past Cartier and lifted a backhander at the net. Salmon River won the game 9-1. John Gokey/Malone Telegram 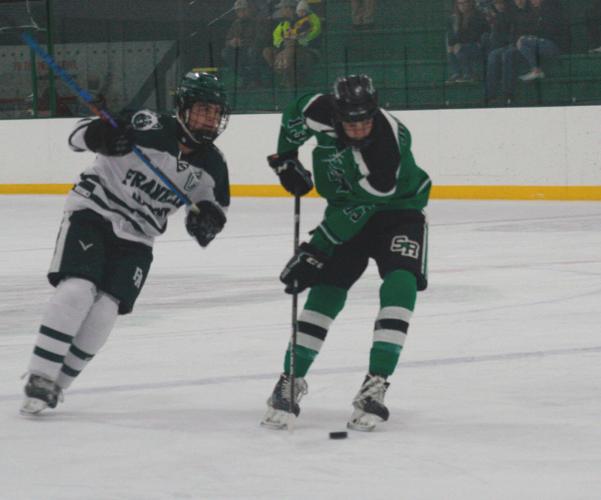 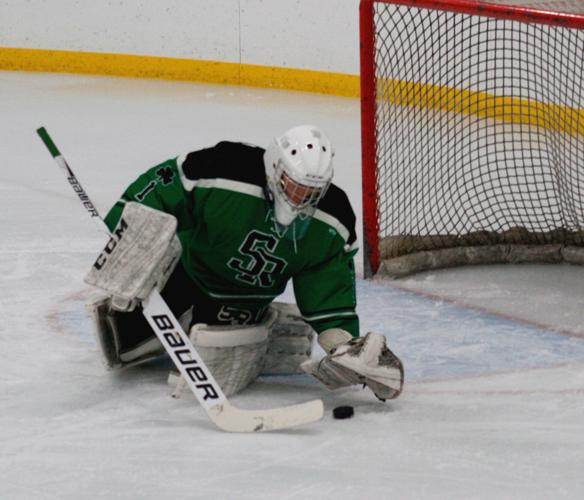 Salmon River goalie Rick Chatland slaps his glove on the puck after making one of his 20 stops during the season-opening win against Franklin Academy in the NAC Division II contest at the Malone Civic Center on Saturday. John Gokey/Malone Telegram 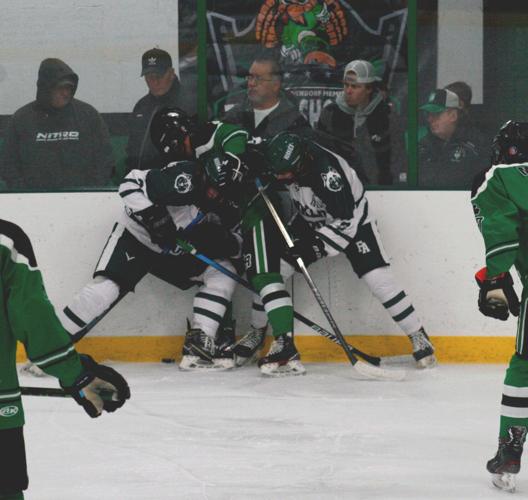 A pair of Franklin Academy players attempt to keep a Salmon River forward from gaining possession of the puck in this battle along the side-boards during the second period of the NAC Division II boys hockey game at the Malone Civic Center on Saturday. The Shamrocks claimed possession of the puck and skated to a one-sided victory against the host Huskies. John Gokey/Malone Telegram

Salmon River’s Evan Collette drives to the net while fending off the check from FA defenseman Denali Boyea-Woodward during the first period of the NAC Division II opener at the Malone Civic Center on Saturday. The SRC senior logged two goals and set up two others as the Shamrocks opened up defense of their 2021-22 title. John Gokey/Malone Telegram

It didn’t take fans in the stands very long to figure out which team was the dominant one in Saturday’s Northern Athletic Conference Division II boys hockey opener at the Malone Civic Center on Saturday.

The Salmon River Shamrocks, the defending Division II regular season and playoff champions, broke open a one-goal game with four scores in the second period, adding four more during the third to produce a 9-1 win against the host Franklin Academy Huskies.

“It went pretty much as we expected,” stated FA head coach Kyle Mathieu. “We are young, especially on defense, and I though we pretty much held our own against a veteran team.”

The Shamrocks, who concluded last year’s championship season with a 19-3-1 record, are a veteran team with 13 seniors on the roster. SRC took a 1-0 lead against the Huskies in the first period, getting on the board with just 42.8 seconds showing on the clock, and outshooting FA 23-3 during the period.

It was a lot more of the same during the second period, as SRC lit the lamp four times and carried a 5-0 lead into the third period. Salmon River increased its advantage to 9-0 and were in search of a season-opening shutout for starting goalie Rick Chatland only to have FA spoil that bid with their lone tally of the contest with just 42 seconds left.

“They (Salmon River) are at their peak right now,” continued Mathieu. “We have to take things one game at a time and look to improve each time we take to the ice. Today’s score really does not indicate just what type of team we have.

“A lot of our guys played a good game and Treviyn (goalie Deuyour) played a really good game with his 48 stops,” added the FA coach.

Senior Connor Dishaw paced the Shamrocks offensively, scoring three times and adding an assist, while seniors Evan Collette and Chase Lewis combined for four goals (2 each) and three assists. Junior Kahontiio (Michael) Lazore added a goal and two assists to the victory, while junior Carter Johnson logged one goal and one assist.

Senior defenseman Caiden Cartier finished off the season-opening win with a pair of assists, while solo helpers came off the sticks of seniors Luke Miller and Kade Cook.

Chatland backstopped the win by stopping 20 of FA’s 21 shots on goal, as his teammates scored twice on the power play, including the eventual game-winning goal early in the second period. Salmon River also scored a short-handed goal during the middle stanza.

“I really don’t expect it to be this one-sided the next time we meet them (FA plays at Salmon River on Feb. 14) near the end of the regular season,” projected Mathieu.

The Huskies’ lone marker late in the third period came off the stick of Brushton-Moira senior Edmund Collins, with assists going to Brock Spaulding and Owen Burditt.

Franklin Academy looks to turn things around in its next outing, a 7:15 p.m. start on Tuesday at the Malone Civic Center against Tupper Lake. Salmon River has its home opener on Wednesday, a 6:30 start against the Norwood-Norfolk Icemen.