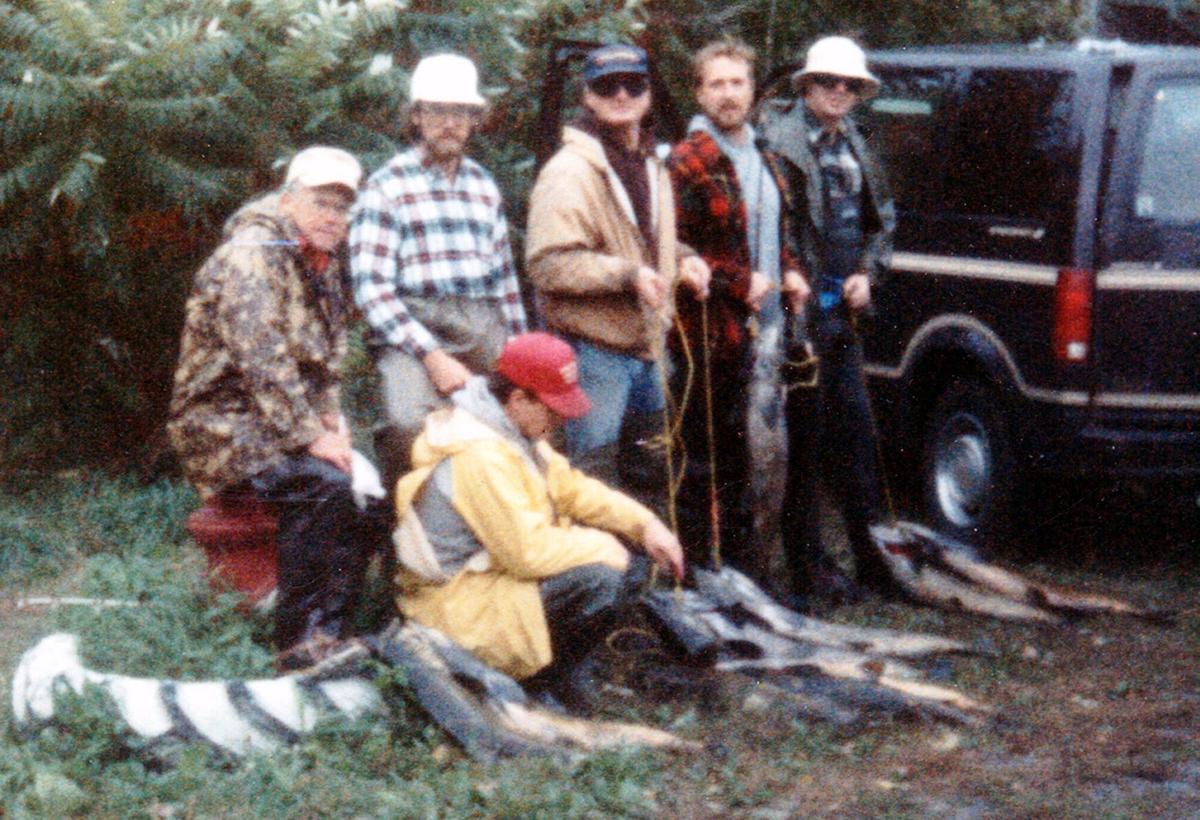 weber photosLarry and a group of raw rookies from October 1990 with their haul of 19 snagged fish in a two-hour span, which was just under the limit of three apiece. 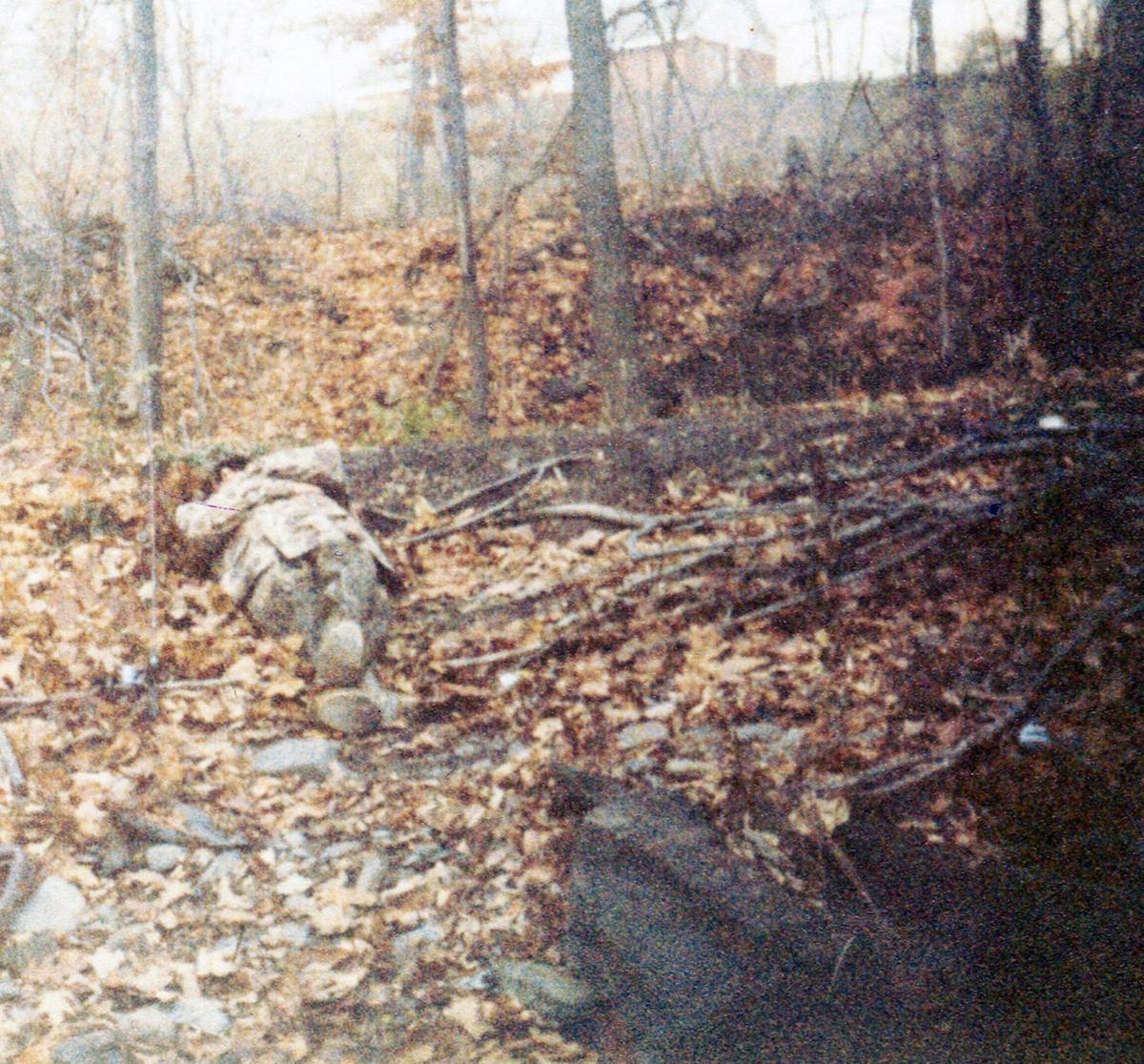 Is this a pile of leaves on the side of the Longbridge Pool, or is it? It could very well be Gokeymon hiding from work, his wife, or both. Or could it be an undercover UCO waiting to pounce on dirty snaggers after the ban was enacted?

weber photosLarry and a group of raw rookies from October 1990 with their haul of 19 snagged fish in a two-hour span, which was just under the limit of three apiece.

Is this a pile of leaves on the side of the Longbridge Pool, or is it? It could very well be Gokeymon hiding from work, his wife, or both. Or could it be an undercover UCO waiting to pounce on dirty snaggers after the ban was enacted?

When the New York State’s Department of Environmental Conservation (hereinafter DEC) introduced pacific salmon – chinook/kings and cohos – into Lakes Erie and Ontario in the early 1970s, they were sure that once the fish entered the tributaries to spawn in the fall they would not take a lure, so they allowed snagging. Pacific salmon, unlike most species of fish, all die after they spawn.

The preferred weapon (for snagging) was a large treble hook with a big lead weight molded around the center. Throw it in, yank sidewise, then hang on (as in Part 1).

The effect, if you hit a salmon, is like sticking spurs in an unbroken horse. We have seen them peel off 50 yards of line and zigzag around three different rocks in less than six seconds and take an entire large spool of 30 pound, or even 40 pound, test line down to its end and snap it.

Back in the day when the runs were heavier, grown and strong men would put their poles down and declare, “That’s it, I’m done. I can barely lift my arm anymore.” It often wasn’t until late February that our right shoulders started to work well again.

As I said in Part 1, I initially went to Pulaski for the fishing. I kept catching snag hooks off the bottom on my bait hook and finally tried one in the large Longbridge Pool in downtown Pulaski. I hooked a huge one in the rapids in high water and it just did what it wanted – until it snapped the line and left.

I met Larry McQueen (no relation to Steve McQueen, as this is a fake name to protect the not so innocent) when he worked in the county’s probation department 37 years ago. Last year, we figured out that the number of day trips (down, fish and back the same day) we took together equaled at least 365 – one entire year of our lives chasing salmon and steelhead. We were both lucky enough to have jobs which allowed us to take time off during the week when it was less crowded.

I think it was on our first trip together we were snagging with bass gear in some low water pools upstream in the Salmon River. In the old days, the dam would be closed for part of the day, thus concentrating the fish in pools. Basically, once you got them under control, you could then skid them up onto nearby gravel bars – quite a trick with a broken reel, but when needs must .... Until the water dropped, there weren’t many “fishheads,” as the locals called them/us. Once the time for the water to drop approached, it looked like a horde of zombies coming slowly out of the woods to surround the low water pools.

Some sportfishing groups sought to ban snagging as unethical and unsporting, citing mass crowds on the weekends, litter and rowdy behavior, including fights over fish and fishing spots – all true to a certain extent. There was even one memorable story of a drunken fisherman in downtown Pulaski who put his waders on, did a staggering turn behind his car and slammed the trunk. Unfortunately for him, his loose suspenders were hanging into the trunk space, thus pinning him to the back of his car. His struggles and language attracted, on information and belief (legal term for those unfamiliar), the attentions of two uniformed conservation officers (hereinafter UCOs) who freed him from his predicament. It really was like the Wild West on weekends and a lot of people made a lot of money from it; hence the opposition to the proposed ban on snagging and litigation related thereto.

I knew the Supreme Court justice in Albany who drew the snagging ban case. I expressed no opinion as to the merits but asked, when he made his ruling, if he could fax me the decision. He did and it overturned the ban, effectively allowing snagging to resume while DEC appealed. The very next day, Larry and I, armed with snag hooks and copies of the decision, headed to the Ellis Cove section of the Salmon River. The other fishers (there were several women too) all asked what we thought we were doing as snagging was banned. “No, it isn’t.” Somebody called DEC and in short order we were beckoned to the bank by two UCOs. “What do you thing you’re doing?” “Snagging.” “That’s illegal now.” “No, it isn’t,” and I produced a copy of the decision. They read it, called their captain, handed back the decision with a grumpy “have a nice day” and left. When we told the other fishers what happened, many of them fled to their cars and/or tackle shops to find snag hooks. We helped several of them catch fish, including one woman whose catch was her first ever. Within hours, the word was out over the entire Salmon River watershed and snag hooks were once again for sale. Snagging continued for the rest of the 1994 fall season until DEC finally prevailed on appeal in February of 1995 and snagging ended for good (or ill, depending on your point of view).

The one picture is of Larry and a group of raw rookies from October 1990. Seven of us snagged 19 fish in two hours – just under the limit of three apiece. They look, and were, tuckered for the reasons I set forth earlier. Two members of the group are Larry’s brothers. Since I have not asked them permission to use their names, I’ll just call them Deva and Joan. The other photo is a UCO disguised as a pile of leaves, waiting to pounce on snaggers after the ban was enacted.