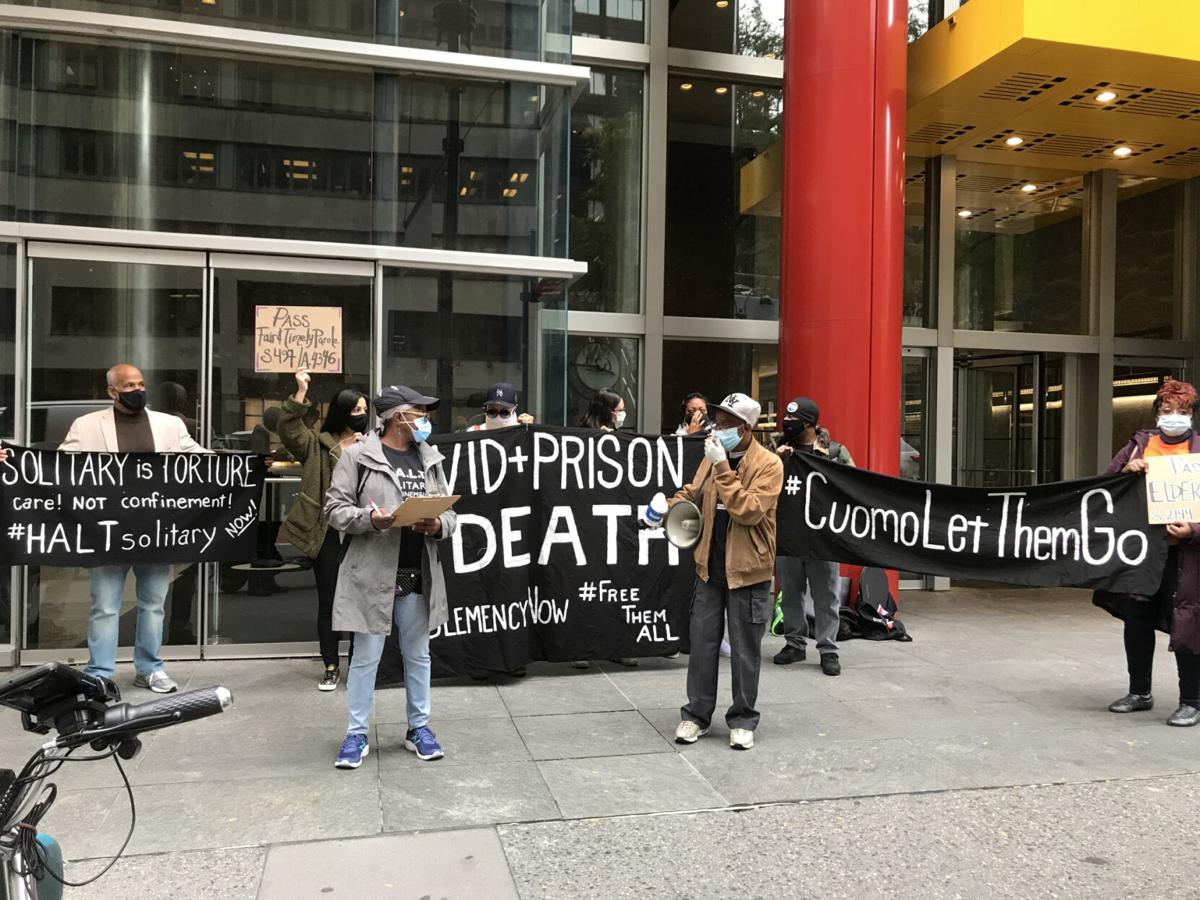 Advocates rallied outside prisons statewide and outside Gov. Andrew Cuomo’s office in Manhattan on Tuesday to urge the governor to grant clemency to elderly and the most vulnerable inmates as COVID-19 spikes in several New York prisons. Courtesy of Center for Community Alternatives 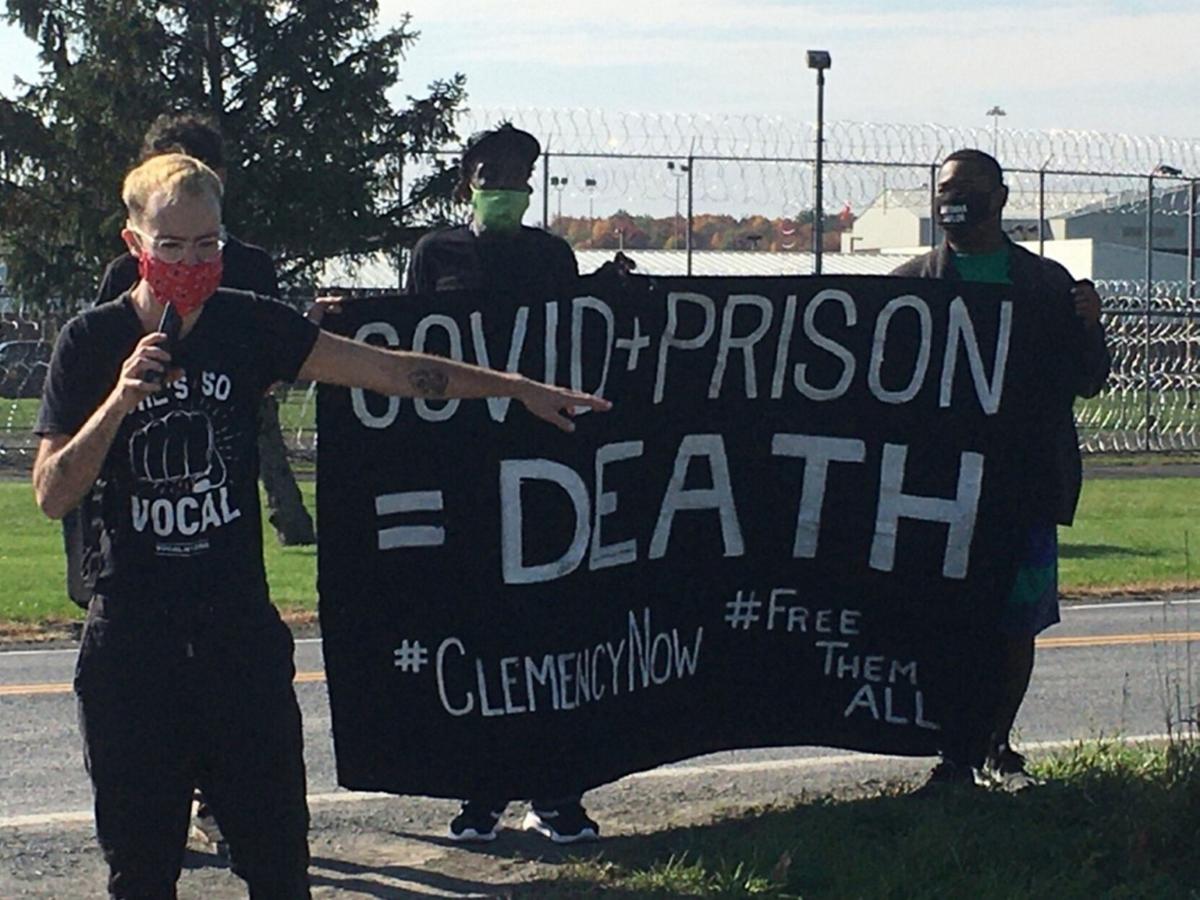 Advocates rallied outside prisons statewide and outside Gov. Andrew Cuomo’s office in Manhattan on Tuesday to urge the governor to grant clemency to elderly and the most vulnerable inmates as COVID-19 spikes in several New York prisons. Courtesy of Center for Community Alternatives

Advocates and lawmakers rallied around the state Tuesday, slamming Gov. Andrew M. Cuomo and lawmakers for failing to act as COVID-19 infections spike at state prisons and correctional facilities, including Elmira and Greene County.

Several hundred protesters gathered outside Elmira Correctional Facility in Chemung County — the location of an active state virus microcluster — at the state Capitol in Albany, outside Cuomo’s office in Manhattan and at Sen. Todd Kaminsky’s, D-South Shore, office in Long Island, shouting in support of New York prisoners Tuesday as the coronavirus pandemic continues.

Advocates shouted “Free them all!” and held various signs and banners such as “COVID-19 + Prison = Death,” saying all coronavirus infections and fatalities in state prisons were preventable.

“Mass incarceration as we know now is a public health crisis,” said Marvin Mayfield, statewide organizer at Center for Community Alternatives, who argued New York inmates are housed in increasingly unsafe and inhumane conditions amid the COVID-19 emergency.

Mayfield and various demonstrators, including formerly incarcerated New Yorkers or loved ones of current inmates, shared stories Tuesday about how sick inmates are forced into solitary confinement to quarantine and receive improper medical care.

“We demand Gov. Cuomo, use your executive power to grant clemency for all medically vulnerable incarcerated people, those within a year of their release date or on technical parole violation,” Mayfield said.

Several protesters argued the governor could deincarcerate 50% of state inmates by that afternoon by granting those groups clemency.

The state is working to test each of its roughly 36,000 inmates by the end of November as COVID-19 cases have recently surged at the Elmira prison, which currently has 448 active COVID cases, according to data Friday from the state Department of Corrections and Community Supervision. The department had not posted updated numbers as of press time Tuesday.

Visitation is suspended at the Western New York facility.

Visitors are also barred from Greene Correctional Facility in Coxsackie, which has 100 active cases and one pending test result. The department reported 32 Greene inmates have recovered from the virus, with 1,020 testing negative.

Antonio Dayter, a formerly incarcerated New Yorker, was recently released from the Coxsackie prison. Many corrections officers refuse to wear masks as a protest, Dayter said, contributing to the spread in state facilities.

He witnessed many inmates denied medical treatment or access to friends or loved ones, including by telephone, while quarantined or recovering from the virus.

“Officers are not being tested,” Dayter said. “… Counselors, staff, officers who had COVID were placed among us. DOCCS is not doing nothing about it. They’re aware of these conditions in these prisons.

“I know what’s going on and what’s not being disclosed behind closed doors,” he added. “They did not get sentenced to death.”

At the height the state’s initial COVID-19 outbreak this spring, the state permitted releasing nonviolent inmates with less than a year remaining on their sentence.

Mayfield called for the Legislature to reconvene for the passage of proposed Elder Parole, Fair & Timely Parole and the Humane Alternative to Long-Term, or HALT, Solitary Confinement Act to reduce the number of incarcerated New Yorkers, reducing inmate density and preventing additional coronavirus cases and deaths in state prisons.

“Now is the time to act,” Mayfield said. “We can’t wait for a mass casualty like we saw in nursing homes.

Cayuga Correctional Facility, west of Syracuse, has 44 active cases with 246 pending test results. Visits had not completely halted as of Sunday.

DOCCS suspended visitation at both Greene and Elmira correctional facilities due to the outbreak. Visitation is suspended at Southport Correctional Facility in Chemung County due to its location within an orange microcluster zone.

DOCCS will require all visitors to have proof of a negative COVID-19 test from within the last seven days when visitation resumes. The department will maintain a supply of thousands of rapid tests to deploy to any facility that sees an increase in cases.

“Here are the actual facts: Once we became aware of this situation, we immediately deployed rapid testing for incarcerated individuals and staff, isolated incarcerated individuals who tested positive, quarantined those who were exposed and suspended visitation to these facilities,” Senior Adviser to Gov. Cuomo Rich Azzopardi said Tuesday. “A vast majority of these cases has been asymptomatic, DOCCS medical staff are closely monitoring the few who have shown symptoms. Every facet of the state’s response to this pandemic has been guided by facts, scientific data and the guidance of public health experts and these efforts are no different.”

Cuomo responded briefly Monday to a question about the coronavirus outbreak in state prisons during a briefing in the state Capitol.

“I would challenge the premise that ‘we let it get so bad,’” Secretary to the Governor Melissa DeRosa immediately added Monday. “… We’re taking every precaution along the way in making sure anyone who is positive is immediately being isolated with the same contact-tracing procedures you would do outside the prison walls.”

Prison beds were debunked to reduce inmate density in cells.

The majority of positive COVID-19 cases in state prisons are asymptomatic, DeRosa said.

“So we believe this is a byproduct of community spread where it exists in the community and it’s very difficult to keep it out of congregate facilities,” she said. “We’re taking this very seriously and taking the health and safety of the prison population and the corrections officers as seriously as we can.”