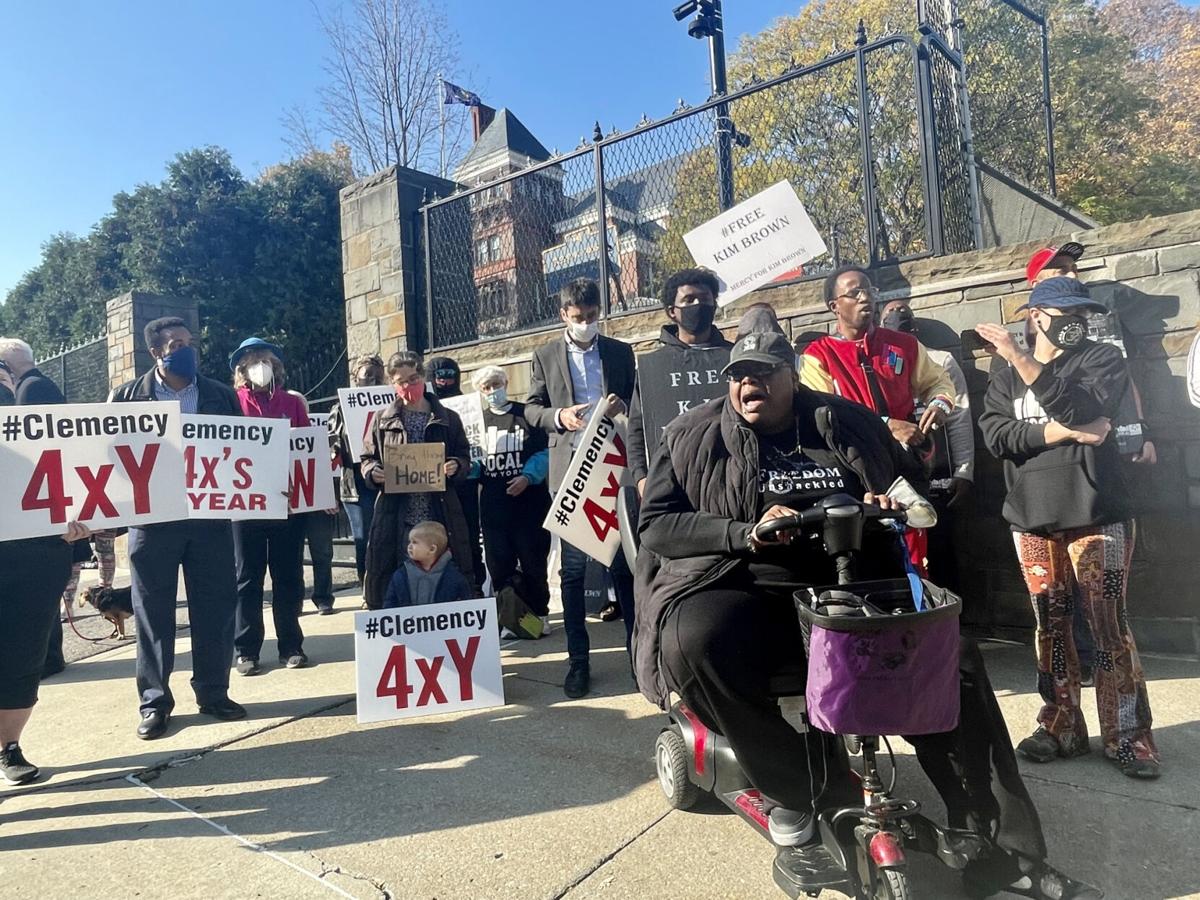 Standing outside the Executive Mansion in Albany on Tuesday, advocates demand Gov. Kathy Hochul grant clemency to any of the 6,000 incarcerated New Yorkers who applied for a pardon. Kate Lisa/Johnson Newspaper Corp. 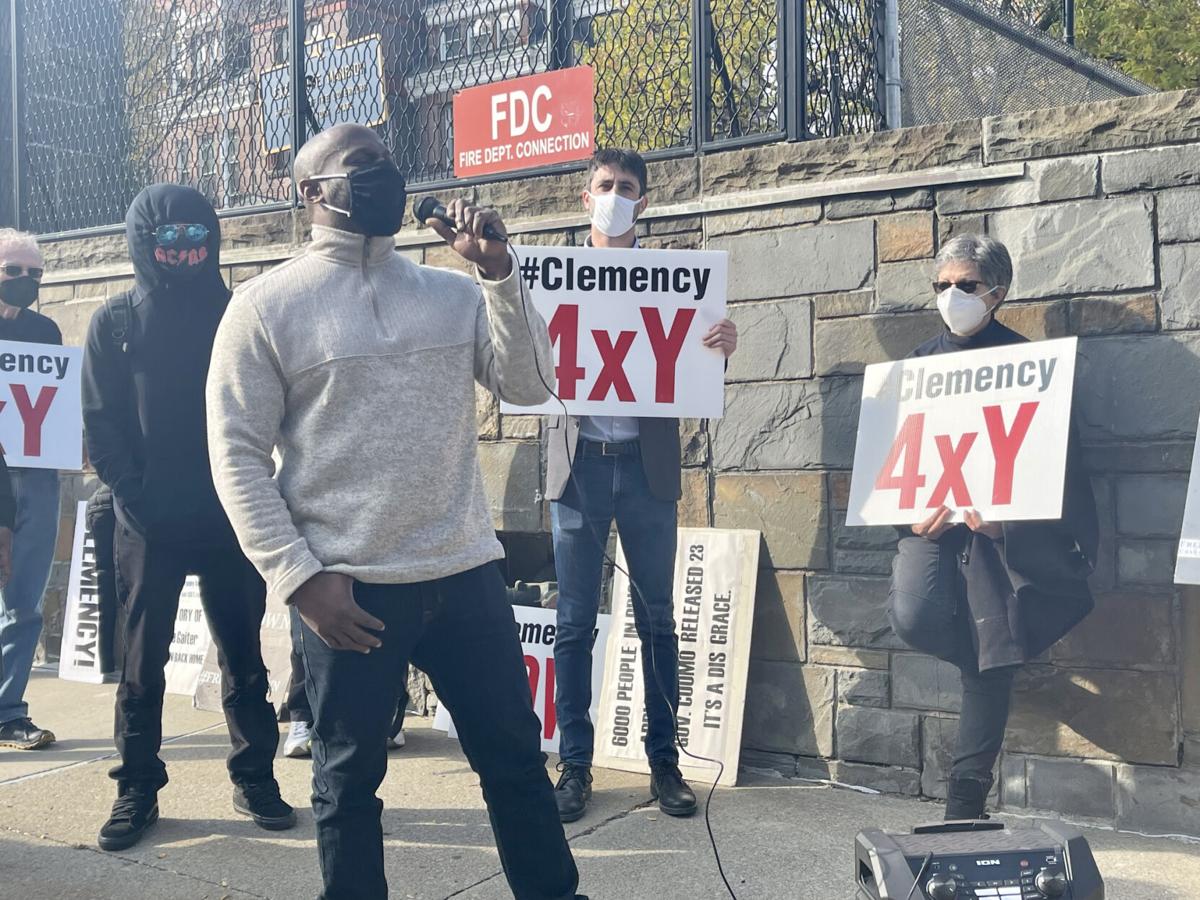 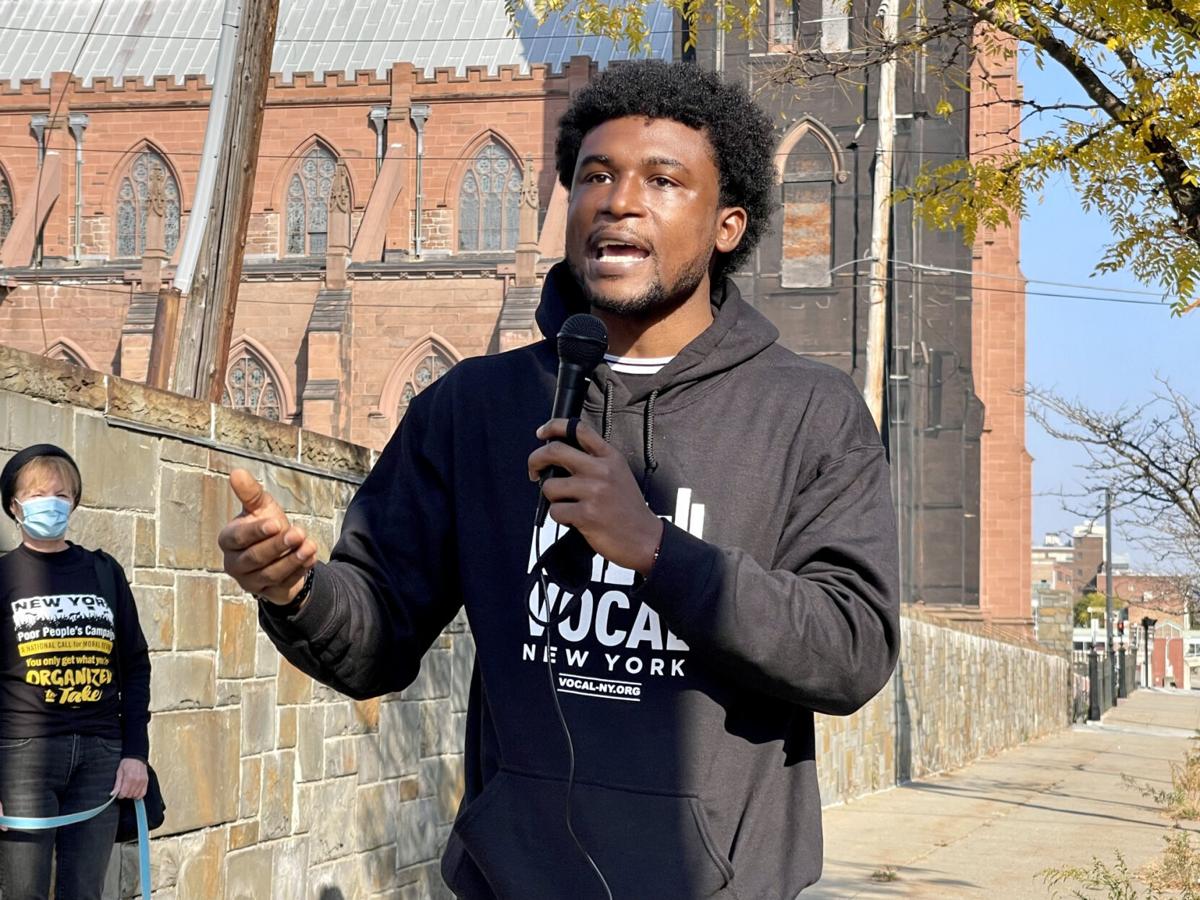 Lukee Forbes, of Albany, speaks to a rally of about 40 people outside the Executive Mansion in Albany on Tuesday to urge Gov. Kathy Hochul to grant more clemencies to decarcerate New York. Kate Lisa/Johnson Newspaper Corp.

Standing outside the Executive Mansion in Albany on Tuesday, advocates demand Gov. Kathy Hochul grant clemency to any of the 6,000 incarcerated New Yorkers who applied for a pardon. Kate Lisa/Johnson Newspaper Corp.

Lukee Forbes, of Albany, speaks to a rally of about 40 people outside the Executive Mansion in Albany on Tuesday to urge Gov. Kathy Hochul to grant more clemencies to decarcerate New York. Kate Lisa/Johnson Newspaper Corp.

“The government, these administrators, the legislators ... they’re expecting individuals to come out (of prison) and show mercy when that same mercy wasn’t granted to them,” said Thomas Kearney, a formerly incarcerated New Yorker, who served time inside various facilities across the state, including Coxsackie Correctional Facility.

Kearney was one of about 40 people who gathered in front of the Executive Mansion on Eagle Street at Tuesday’s rally in Albany. Advocates held a similar rally for clemency in June.

Cuomo typically granted a handful of clemency applications each year around the Christmas and New Year’s holidays. He commuted the sentences of five men before leaving office Aug. 23.

About 16,000 total incarcerated people filed for clemency during Cuomo’s 10-year tenure, during which he granted 41 commutations.

Kearney’s uncle remains incarcerated inside Auburn Correctional Facility, Cayuga County, and is one of the 6,000 applicants waiting to be granted clemency.

Hochul was on the way inside her Manhattan office Tuesday morning when she gave a Releasing Aging People in Prison campaign organizer a smile and thumbs up outside.

Staffers in Hochul’s office would not answer if the action was a sign of support or intent to grant clemencies more frequently in her administration.

“While we cannot comment on pending clemency applications as the process is confidential, Gov. Hochul is committed to improving justice, fairness and safety in the criminal justice system and we are reviewing applications in that context.” Hazel Crampton-Hays, Hochul’s press secretary, said Tuesday in a statement.

Hochul’s staffers met with activists within the last month about parole reform, continuing to decrease the state’s prison population and alternatives to incarceration. It was the first such meeting since she took office Aug. 24.

A thorough review process begins based on criteria determined by the governor, including an evaluation of the facts and circumstances of the instant offense, an assessment of program participation and achievements while incarcerated, the person’s overall custodial adjustment or other information provided by the applicant to demonstrate rehabilitation, according to Hochul’s office.

The Bureau then sends eligible, completed applications to the governor’s office for review for possible clemency.

Representatives with Gov. Hochul’s office Monday would not comment on the governor’s plans to decarcerate state prisons or if she will increase granting clemencies ahead of next year’s closures.

The governor’s office referred other questions to DOCCS, which did not answer multiple requests for comment as of press time Tuesday.

The total incarcerated population in state correctional facilities is 31,469 people as of Monday — a total reduction in excess of 12,700 individuals since Jan. 1, 2020, and a 56% decline since the department’s high of 72,773 in 1999, DOCCS spokesman Thomas Mailey said.

Roughly 1,420 people are housed within the six facilities to close late next winter, including two maximum-security facilities.

The department does not anticipate needing to release additional incarcerated people to accommodate the upcoming closures.

“As a result of the dramatic decline in incarcerated population, there are a number of vacant beds in the system,” Mailey said. “As a result, there is capacity within the remaining 44 correctional facilities so that the incarcerated will be transferred to another facility based on their security classification, as well as medical and mental health needs. ... DOCCS has plenty of capacity at the remaining 44 Correctional Facilities to absorb the population at the prisons that are closing.”

“There will also be individuals who will complete their sentences and are released, as well as those granted parole,” he added.

DOCCS reports 67,550 pardons granted, including voting pardons, in the state from 2011 to date, according to Mailey.

Civil Service Employees Association President Mary E. Sullivan said Tuesday that the union, which represents thousands of civilian support workers in DOCCS, will be watching to ensure workers, communities and public safety are not harmed as officials move toward the closures.

“These facilities not only continue to keep our communities safer, but provide good-paying jobs in their communities as a vital economic engine,” Sullivan said. “The state has an obligation to ensure that these workers remain employed, and that the communities they are in not suffer as a result of these closures.”

The closures are expected to impact about 200 CSEA members after they take effect March 10.

State officials told union leaders that the state will make every effort to place workers in other facilities or positions to avoid layoffs, Sullivan said.