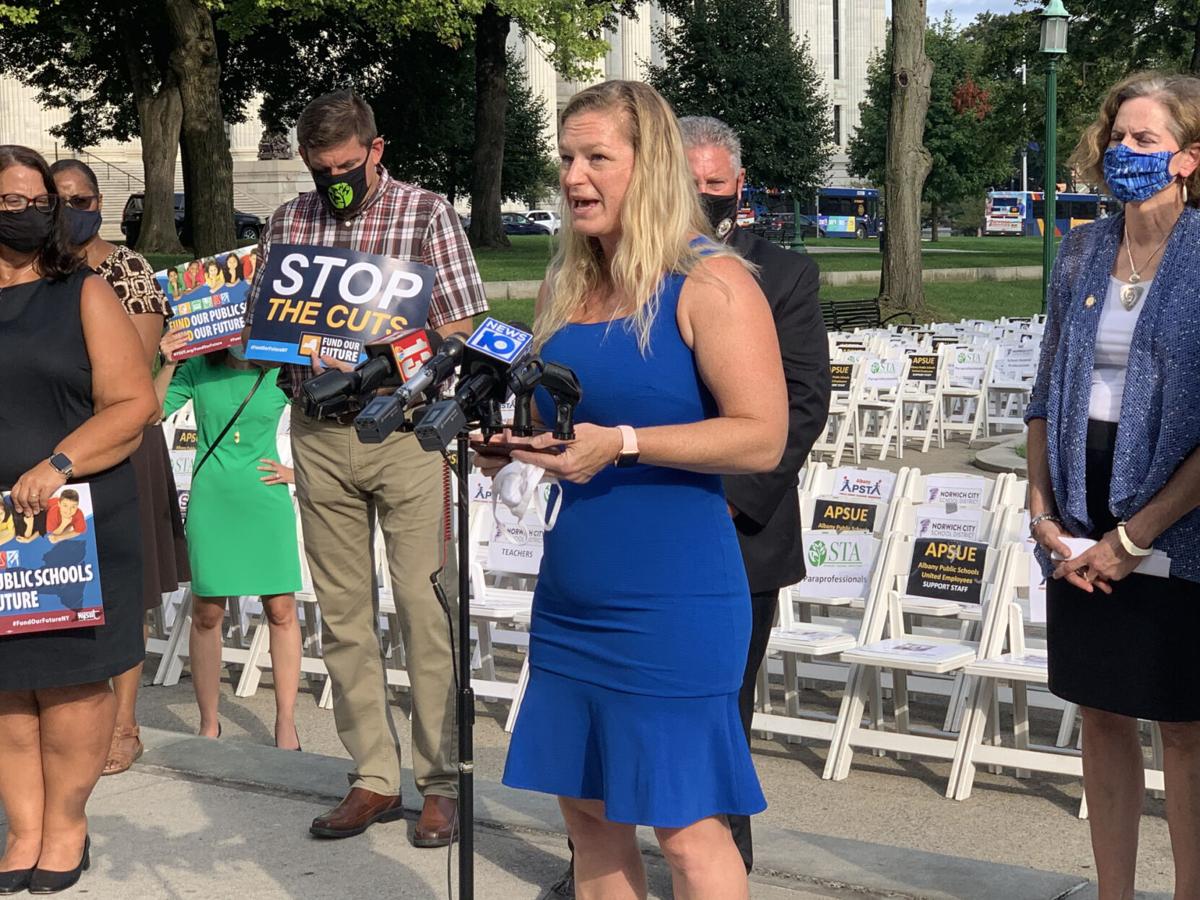 Albany City School District parent Ginny Farrell speaks Sept. 10 outside the state Capitol about devastating position and programming cuts that she said will affect the education of children for a generation. Kate Lisa/Watertown Daily Times 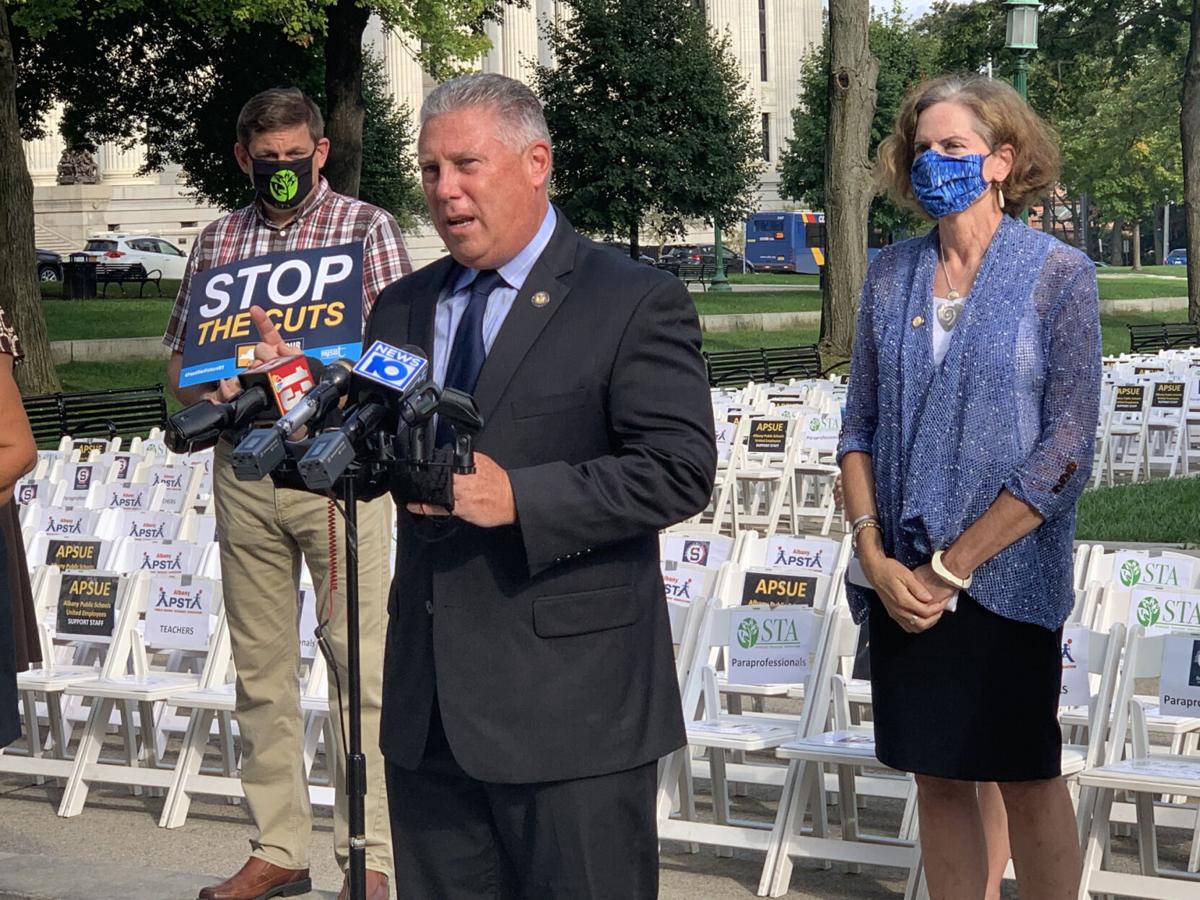 Albany City School District parent Ginny Farrell speaks Sept. 10 outside the state Capitol about devastating position and programming cuts that she said will affect the education of children for a generation. Kate Lisa/Watertown Daily Times

State education leaders gathered for an event in West Capitol Park on Thursday afternoon to rally lawmakers after many school positions were eliminated in districts statewide as students began or prepare to resume in-person learning after Monday’s Labor Day holiday.

“In the face of a global pandemic, our students need us now more than ever,” Albany Public School Teachers Association President Laura Franz said. “We are once again asking educators to do more with less.”

Hundreds of public school faculty and staffing positions have been cut in poorer, inner-city and smaller rural districts as the state anticipates a $14 billion revenue gap and nearly $30 billion budget shortfall over two years due to the coronavirus pandemic.

The cuts to school staff and programming will impact the education of a generation of children, Albany City Schools parent Ginny Farrell said. The mom of three has a child studying engineering at the University of Buffalo.

“I’m so proud of the opportunities and education he got at Albany schools,” she said. “I don’t know if I’m going to be able to say the same thing about my younger two.”

In a release Wednesday, the state teacher’s union announced it would take legal action against the state if it follows through with plans to withhold hundreds of millions of dollars in school aid later this month.

The state is also expected to slash health care and funding to local governments by 20%.

“If budget cuts aren’t restored, I will only be able to choose virtual learning,” Jude said, adding the negative impact the isolation had on his education. “The option is not for me.”

“Many of my classmates were not able to join virtual classes last spring. They only had one laptop to share with two of their siblings or had access issues.”

“These disproportional cuts are truly upsetting,” said Assemblywoman Patricia Fahy, D-Albany. “We know we had an educational achievement gap long before COVID.”

Schenectady City and the majority of Albany City school parents were forced to enroll their children in virtual, remote classes only because of district cuts.

“We know that’s a weak, second choice for any family,” Fahy said. “We have to put all our cards on the table.”

Last year, Jude said he played cello in the school orchestra and participated in multiple clubs and extracurricular activities from chorus to the science fair, which will be eliminated under the state’s proposed cuts.

“I’m angry the system is failing us in this way,” Jude said.

“In the middle of a public health crisis, these cuts mean we are reopening the shell of a district to restart the year,” said Schenectady teacher’s union President Juliet Benaquisto. “Funding our future means ensuring students have access to fully-staffed, high-quality schools that will prepare them for the future ... and the sound education our students are entitled to.”

Several hundred empty chairs were placed around West Capitol park Thursday signifying the educators and school staff members who have lost their jobs during the pandemic, according to a statement from the state teacher’s union.

School cuts run gamut statewide, and include 116 positions cut to date in Syracuse, 57 in Copiague and 44 in Norwich, among others.

New York City has threatened thousands of layoffs if the expected 20% state cuts come to fruition.

The Norwich City School District, in Chenango County, has 1,700 students in kindergarten through 12th grade and expects a $6 million state cut to its average $40 million budget, which would force it to eliminate nearly half of the district’s 320 employees.

“This is the new reality we are facing unless someone fixes it,” Norwich Educators Organization President Eric Cunningham said. “We desperately need to fix it right now.”

“Our state is broke … why do we always take it out on the children?” Sen. Neil Breslin, D-Delmar, asked outside the Capitol on Thursday. “We have an absolute necessity to raise additional funds with various sources before our eyes. We have an obligation to do that.”

“We at the state have to reconvene and tackle issues that have been put off for years,” McDonald said. “These items, in time, will bring revenue. It will not be immediate, but it’s a step in the right direction.”

Sen. Robert Jackson, D-Manhattan, is sponsoring a bill to extend the top state income tax rate to 11.82% for taxpayers whose New York taxable income is over $100 million and directs the revenue to foundation aid. Sens. Jamaal Bailey, D-Bronx; Brian Benjamin, D-Harlem; Alessandra Biaggi, D-Bronx; and Leroy Comrie, D-Queens co-sponsor the legislation, which was referred to the Budget and Revenue committee in January.

“Make no mistake, the federal government must do its part, but in the absence of that support, it is incumbent upon our state leaders to intervene and prevent these devastating cuts,” Pallotta said Thursday. “The message is simple: Fund our future and stop these cuts.”

Advocates with the state teacher’s union have repeatedly called for the federal government to pass the HEROES Act, which passed the House in May and proposes $500 billion in aid to states and localities.

“They are not stepping up to the plate,” Fahy said. “We will remember in November.”