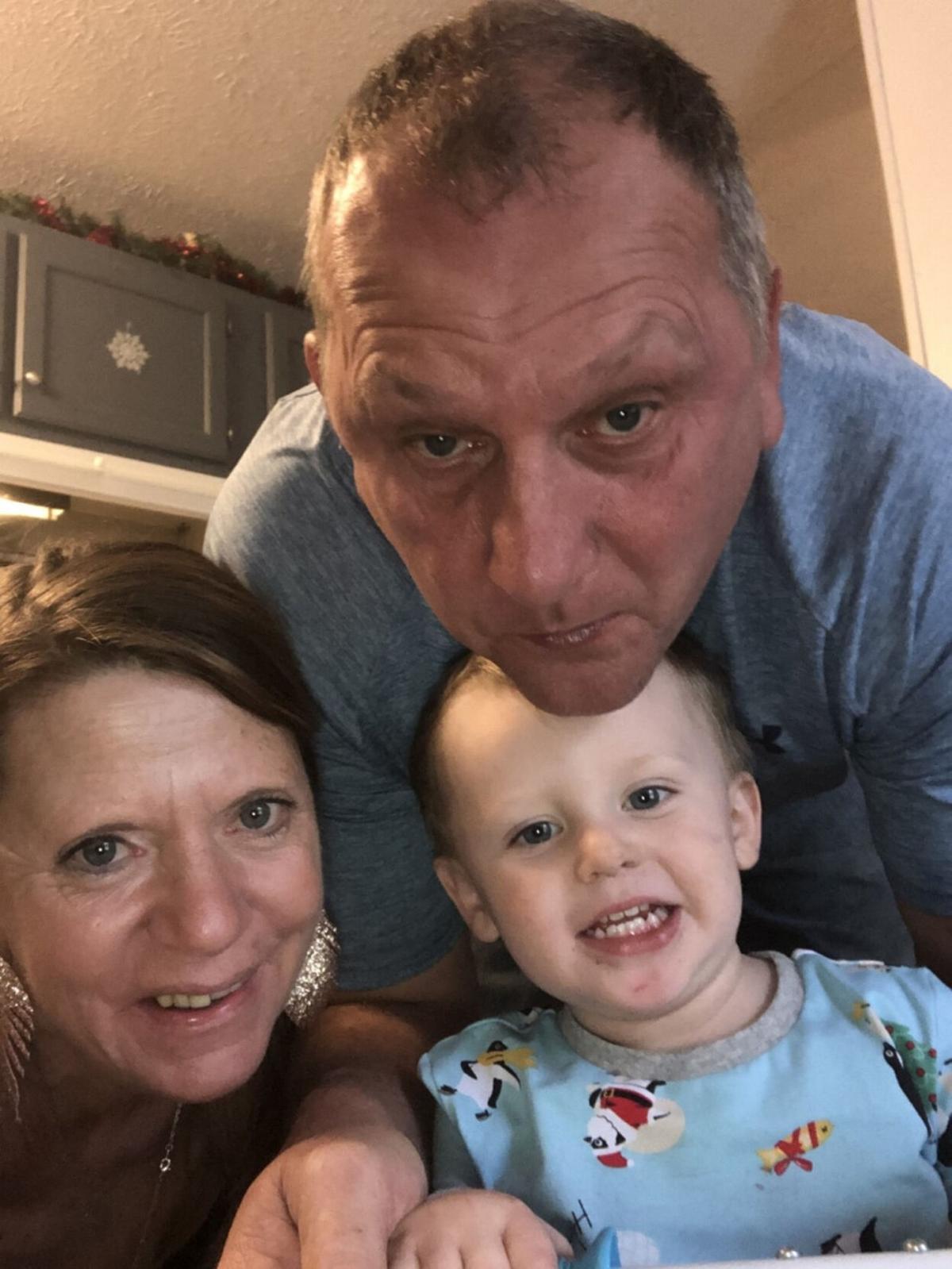 Kim Vermette with her husband Chester and one of the couple’s five grandchildren. Photo provided 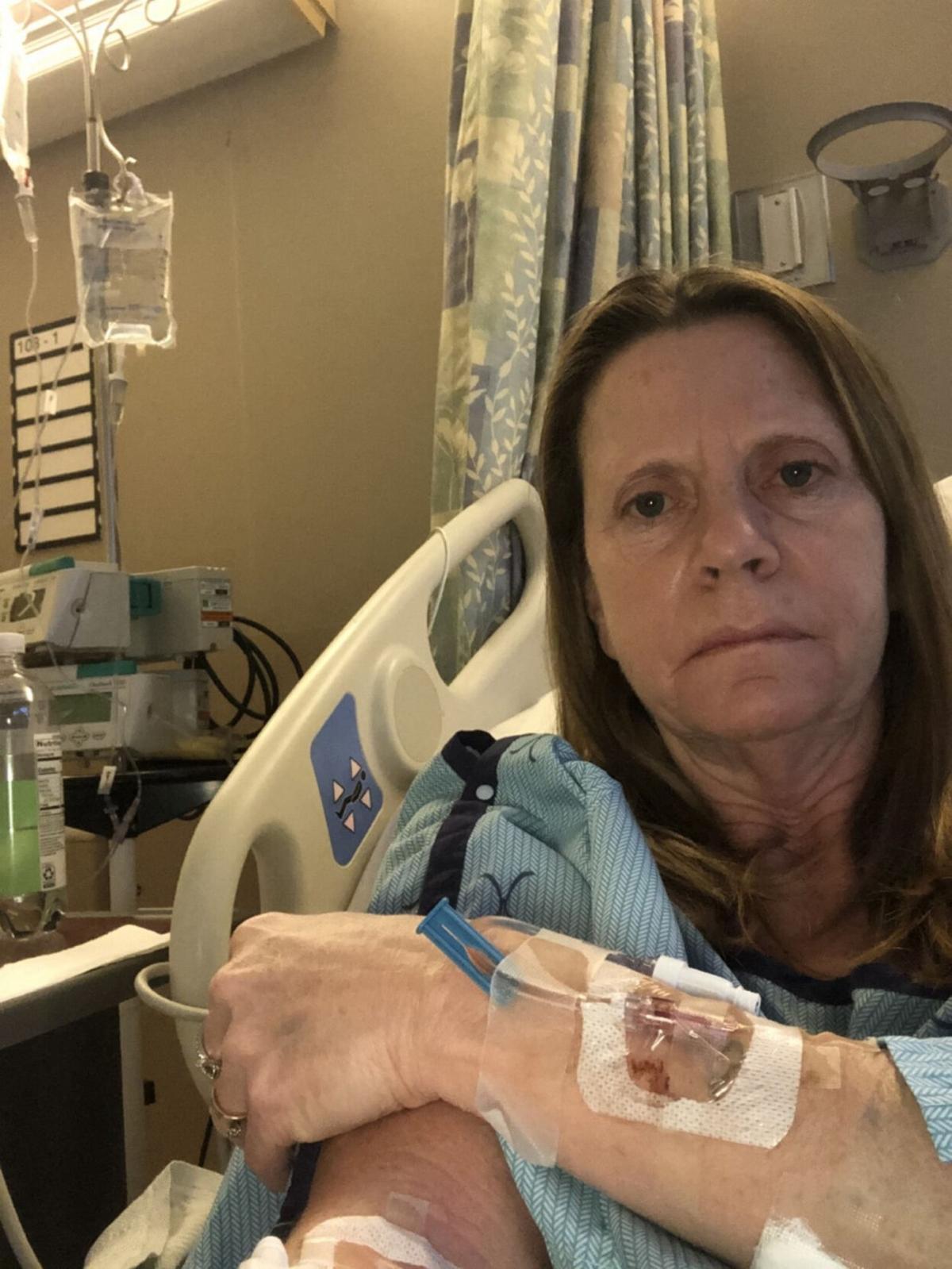 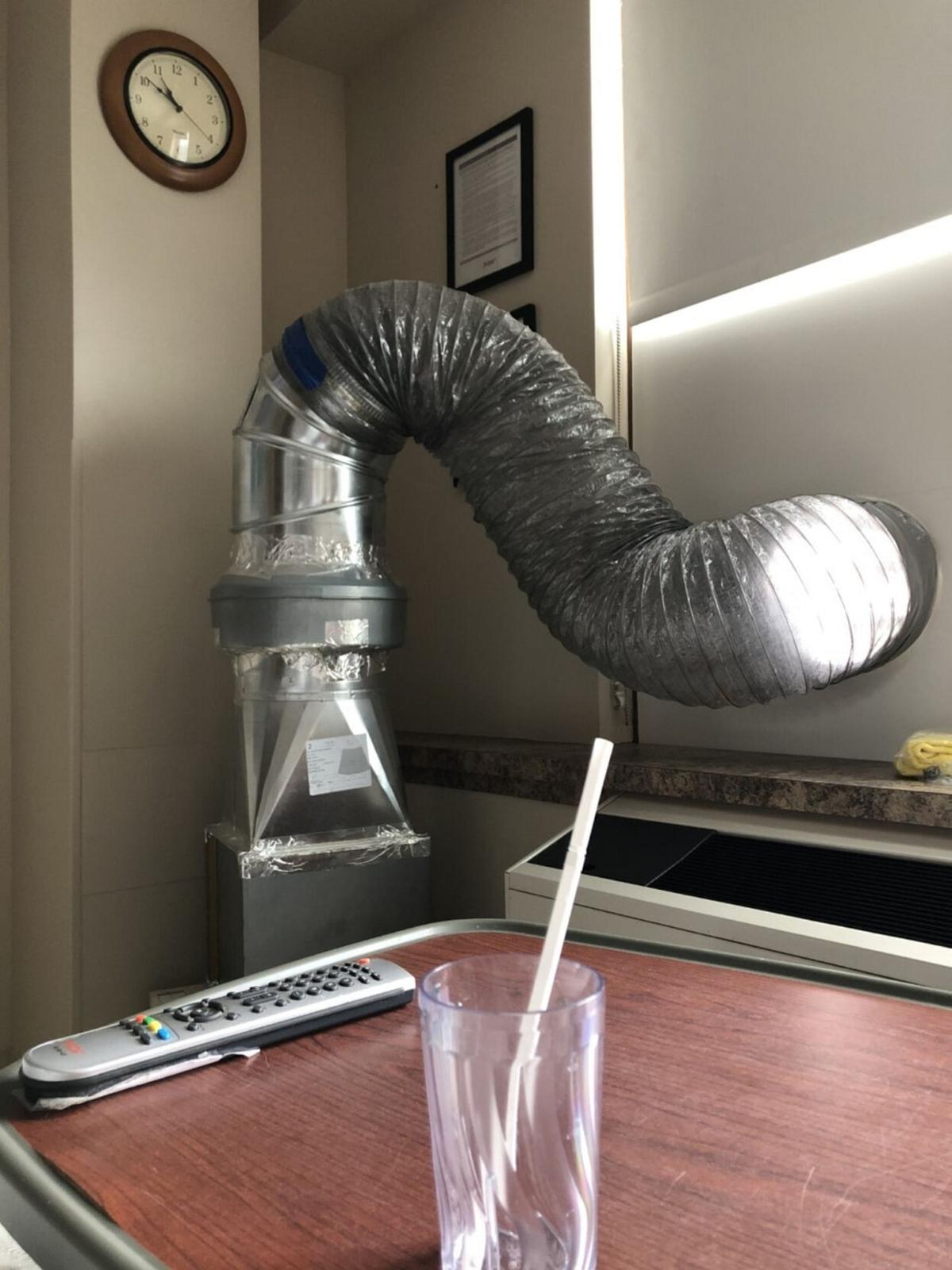 Kim Vermette from her hospital bed had a full view of the room’s ventilation system. Photo provided

Kim Vermette with her husband Chester and one of the couple’s five grandchildren. Photo provided

Kim Vermette from her hospital bed had a full view of the room’s ventilation system. Photo provided

CONSTABLE — All Ashley Richards and her family can do is wait.

“The more they told us, I said, ‘Ya know, at this point she sounds sick enough. I’d like her to go to the emergency room,’” Richards said.

Between 3 and 4 p.m. that same day, the family got the news from the hospital.

Richards took her two sons and herself to her sister’s house.

None of them had been around Vermette. But her husband had.

The scariest part of that day was Vermette’s test coming back positive, Richards said.

Because her mother-in-law has only one lung.

Her left lung was removed to treat lung cancer, detected in 2017. She’s been in remission since.

“The fact that she only has one lung and this virus is a respiratory thing — that’s been one of my biggest concerns since March,” Richards said.

Like hundreds of families throughout Franklin County and millions of families across the country since the start of the novel coronavirus pandemic, Richards’ family is waiting.

For loved ones to be released from the hospital.

For family members to recover.

Richards is still waiting to reunite with her husband. Her two sons, Carson, 8, almost 9, and Mason, 2, haven’t seen their father, Justin Vermette, since Sunday.

“It has probably been one of the hardest things I’ve had to do in a long time — to leave my husband, with two kids,” Richards said.

“My 9-year-old tonight has told me he would sleep in our heated garage, if that meant he could go home.”

“It’s something out of a science fiction movie here.”

Vermette, 53, despises the seclusion at the hospital.

There’s nowhere to go. No one to see.

“I have grandchildren,” she said. “I was around my grandchildren and they had to get tested. The poor things. I feel terrible.”

Vermette said FaceTiming with her family and grandchildren has been a saving grace for her while isolating.

She has suffered from anxiety since being admitted. She’d never had anxiety to this extent, before the virus. The headaches, the body aches and the depression is “wicked.” There’s been times where she’s broken down crying.

“I had to take Ativan every six hours to get me through this,” Vermette said. “Once I got in here...everything kind of kicked in with what was going on. The realness of everything.”

It started as a bad headache last weekend. An abnormal headache, Vermette said, “like somebody was taking (my head) and putting it in a vice.”

It went away. Then, it came back. And then, came a sore throat, the kind “that you’d think nothing of” with a “little cough.” She later registered a fever of 100.2.

Vermette didn’t want to get out of bed Sunday morning. But her husband wasn’t having it after getting off the phone with Ashley. They were going to the hospital.

Ches couldn’t go inside with Kim. While doctors and nurses ran tests on her in the E.R. Department, Vermette said the presence of machinery, plastic and ventilation systems was striking. It made her feel “a little bit weird.” As if under a microscope.

“You’re kind of sorry you got it — embarrassed,” Vermette said. “It’s definitely life changing, to go through it. I never thought I would catch COVID. You always think you’re never going to get lung cancer either and I did.”

Vermette said she has great respect and admiration for Alice Hyde’s frontline workers of the pandemic, calling them “exceptional.”

“The hospital staff’s great,” she said. “They kind of have to be running around with their heads cut off. It kind of looks like a sci-fi film.”

On her first night at the hospital, Vermette was treated with plasma and received antibodies each day after that.

Vermette felt a lot better on Wednesday and was released from the hospital Thursday evening after one final round of treatment. Although she still needed to quarantine when she got home, she was happy to sleep in her own bed again.

“I’m very lucky to make it through this,” Vermette said. “(I’m) not out of the woods yet but the pathway sure is looking brighter.”

Her experience as a COVID-19 patient and living through the global pandemic has opened her eyes to its severity. She said, her initial assessment of the virus was like too many.

It’s just like the flu, she thought initially. It was being overplayed.

“If you think like I used to think, it’s going to get you,” Vermette said. “Think again. No matter how careful you are, it’s out there.”

Richards said she needed to get Mason tested on Tuesday after he woke up with a fever. His mother added, such an occurrence is not unusual, as he usually becomes feverish “usually once a year.”

“I’m hoping I get his results soon and that he’s negative,” Richards said.

“Take it serious(ly),” Richards said of the virus.

Her family will now be waiting for one another to ring their phones.

Richards hopes it will be good news.