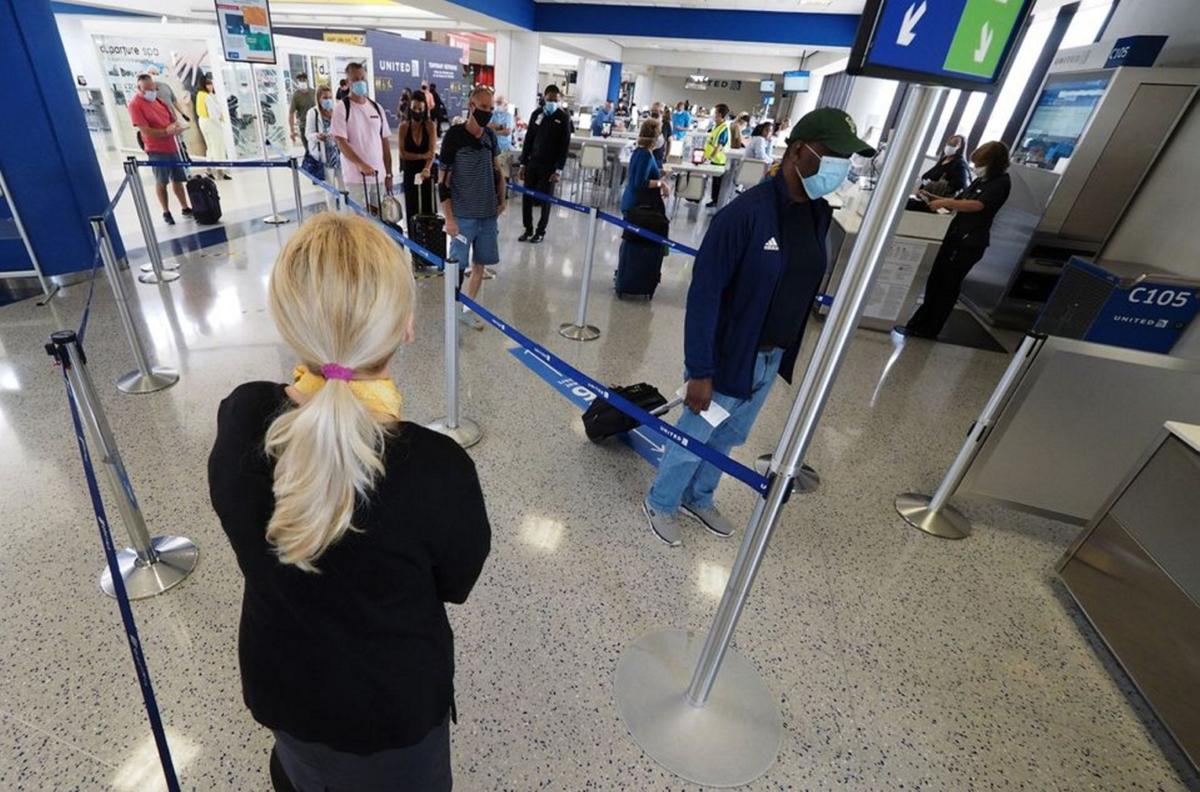 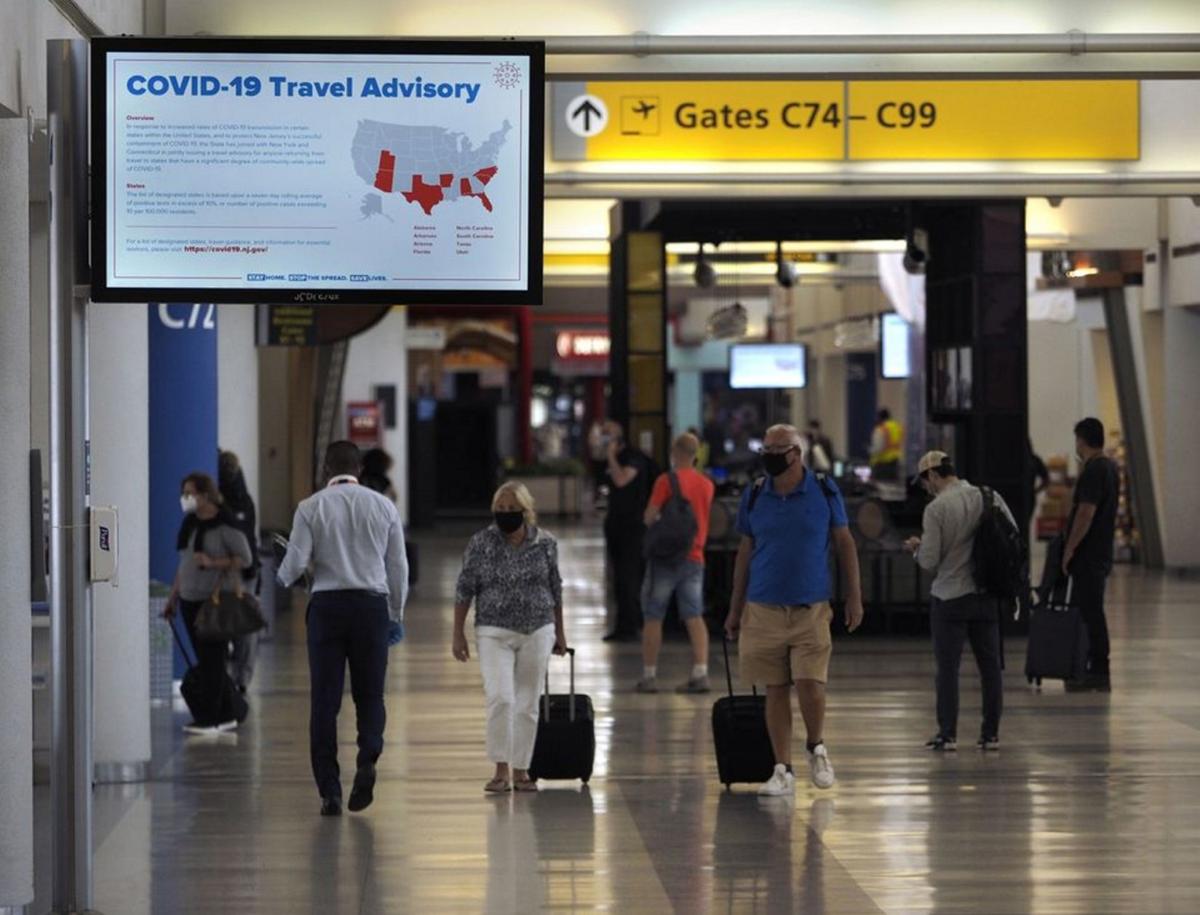 New York’s order was expanded Tuesday to require visitors from 22 states to self-isolate for two weeks, adding Minnesota, New Mexico, Ohio and Wisconsin to the list. Cuomo and Govs. Phil Murphy, D-N.J.; and Ned Lamont, D-Conn., imposed a tri-state order at midnight June 25 mandating a 14-day self-quarantine for travelers who arrive in New York, New Jersey or Connecticut from states with more than a 10% positive coronavirus test rate, or a positive test rating higher than 10 per 100,000 residents over a seven-day average. Weekly calculations are completed Monday nights and the list is updated Tuesday morning.

The virus continues to spread in 39 states and Puerto Rico with 61,492 new cases Monday nationwide. Visitors are required to self-isolate for two weeks when they arrive in New York from 23 states across the nation, including Kansas, Oklahoma, California, Georgia, Iowa, Idaho, Louisiana, Mississippi, Nevada, Tennessee, Alabama, Arkansas, Arizona, Florida, North Carolina, South Carolina, Utah or Texas. Delware was removed from the list after its infection rate dropped.

“I cannot be more clear: Look at what’s happening in the rest of the country — if we are not smart, if we don’t wear masks and socially distance, cases will spike,” Cuomo said Tuesday. “The success of our efforts depends on citizens’ willingness to comply with state guidance, socially distance, wear masks and wash their hands, and rising cases around the country continue to threaten our progress, which is why four new states have been added to New York’s travel advisory.”

Affected travelers are required to complete and submit the state Health Department’s Traveler Form, which airlines have agreed to administer to passengers before landing in New York. The state expanded its enforcement of the advisory Tuesday with increased numbers of Health Department officials stationed at the Port Authority and regional airports to ensure affected travelers complete the document before leaving New York airports.

A new, electronic version of the form is available on the state Health Department website for travelers to complete before flying. Travelers who leave the airport without providing the information will immediately receive a $2,000 fine and may be issued a summons for a hearing and ordered to complete mandatory quarantine. Essential workers are not required to self-quarantine.

Officials are expected to greet passengers at the gate after they deplane in accordance with Cuomo’s updated order after reports some travelers deliberately ignore officials or refused to fill out a form. The airport was waiting on direction from the Department of Health on Tuesday afternoon.

“So far, there’s been no change in the program — they’re still located outside the [security] checkpoint,” Myers said. “The plan is they will move inside the secure area at the gates and meet passengers as they deplane. The idea is to capture these people before they leave the airport and the best way to do that is to meet them at the gate as they come off the aircraft.”

Airports are not responsible for the state’s traveler form or enforcing the order.

A few direct flights from Atlanta, Georgia, Orlando, Florida, and Charlotte, North Carolina, land at Albany each day. An Atlanta flight was expected to land at Albany just before 8 p.m. Tuesday. One was set to land from Charlotte just before 10 p.m.

As of press time, Myers was waiting on state officials for direction, but said the airport would comply with whatever the state needs or requests.

“We haven’t moved to that point yet where they’re at the gate — right now, they remain here at the airport just outside the exit lane, or as what we call ‘land side,’” Myers said. “We’ll assist them, provide any tables, any chairs that need setting up however they want to be in whatever arrangement they want at the gate to accommodate both the passengers coming off the airline itself as well as the Department of Health.”

Travelers have interacted with state officials without issue at the Albany airport, Myers said.

Airlines have all pledged to help make passengers aware of the new requirement using pre-flight emails, pre-flight announcements, in-flight announcements and other methods. Additionally, travelers coming to New York from designated states through other means of transport, including trains and cars, must fill out the DOH traveler form online.

The additional enforcement comes on the heels of three Rensselaer County residents testing positive over the weekend following their recent return from Georgia. Two work in nursing homes and were identified as a result of the state’s weekly mandated testing for nursing-home staff. None of the travelers reported their arrival to the state, according to the governor’s office.

State and local contact tracers identified a COVID-19 cluster in Suffolk County after a Fourth of July party where 35%, or more than 1/3, of partygoers became infected with the virus.

“It’s clear based on contact tracing that many of the new cases in New York are a result of a lack of compliance during the July 4 weekend and illustrate how quickly the virus spreads, with one party, for example, infecting more than a third of attendees,” Cuomo said. “New Yorkers showed incredible courage and resiliency throughout this pandemic, and nowhere is their work more evident than in the numbers we release every day, including in New York City, once a global hotspot. No one wants to go back to the hell we experienced three months ago, so please stay vigilant.”

Five New Yorkers died from the virus Monday. The state’s virus-related fatalities have remained flat for several weeks, down from 10 Sunday.

The state’s total virus hospitalizations increased to 820 Monday — up 28 patients. The number has remained under 1,000, but fluctuated over the last two weeks between 792 to close to 900 virus patients statewide. More than 18,000 New Yorkers were hospitalized at the peak in April.

To access or complete a state traveler form, visit forms.ny.gov/s3/Welcome-to-New-York-State-Traveler-Health-Form