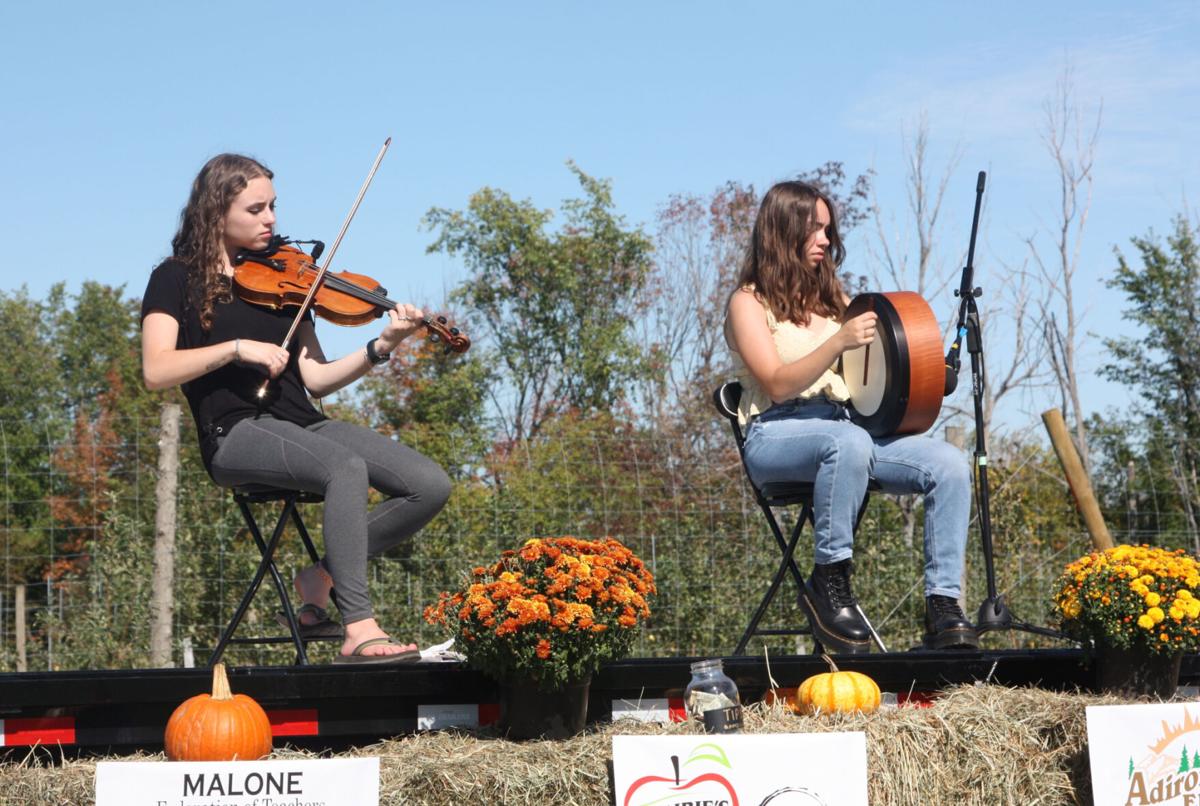 The Goddard Sisters play the fiddle and Irish drum Saturday afternoon during Art at the Orchard in Malone. Alexander Violo/Malone Telegram 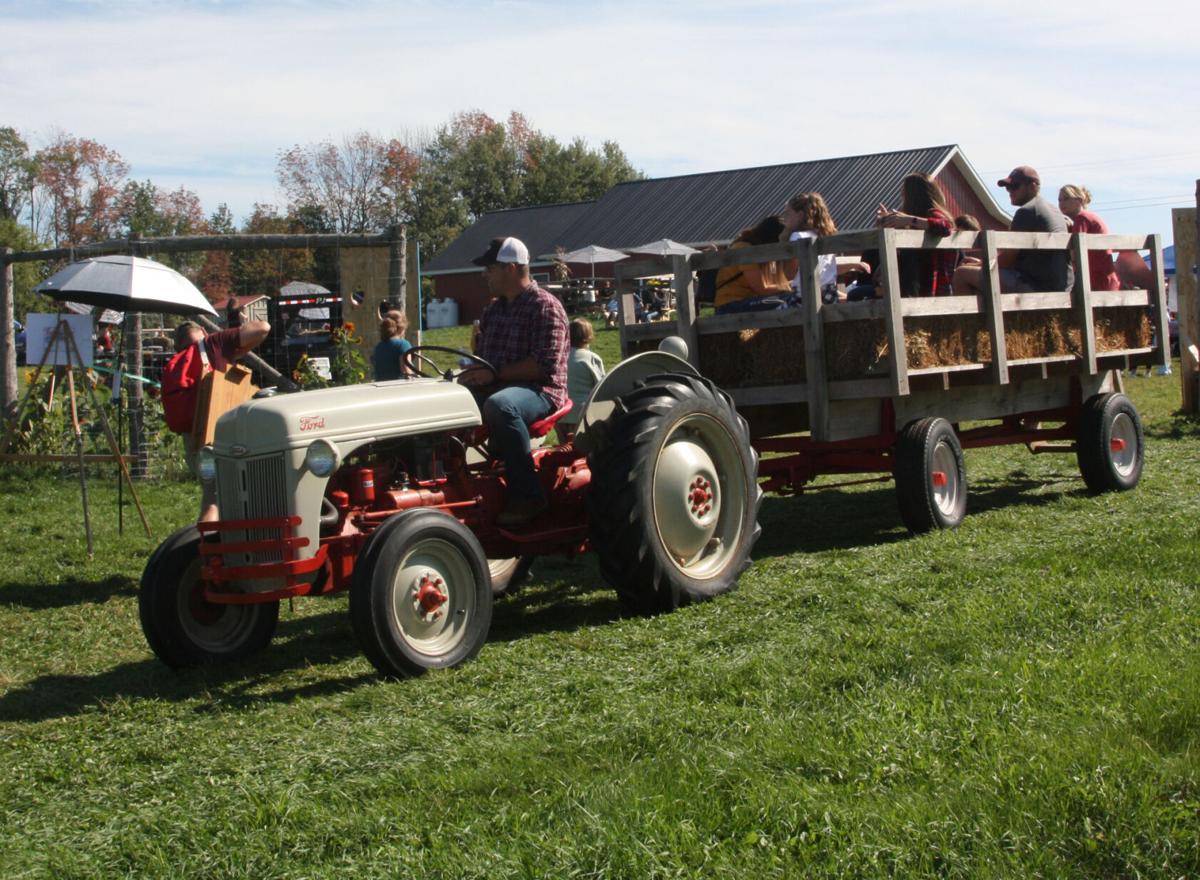 A tractor heads out for a hay ride Saturday afternoon during Art at the Orchard. Alexander Violo/Malone Telegram 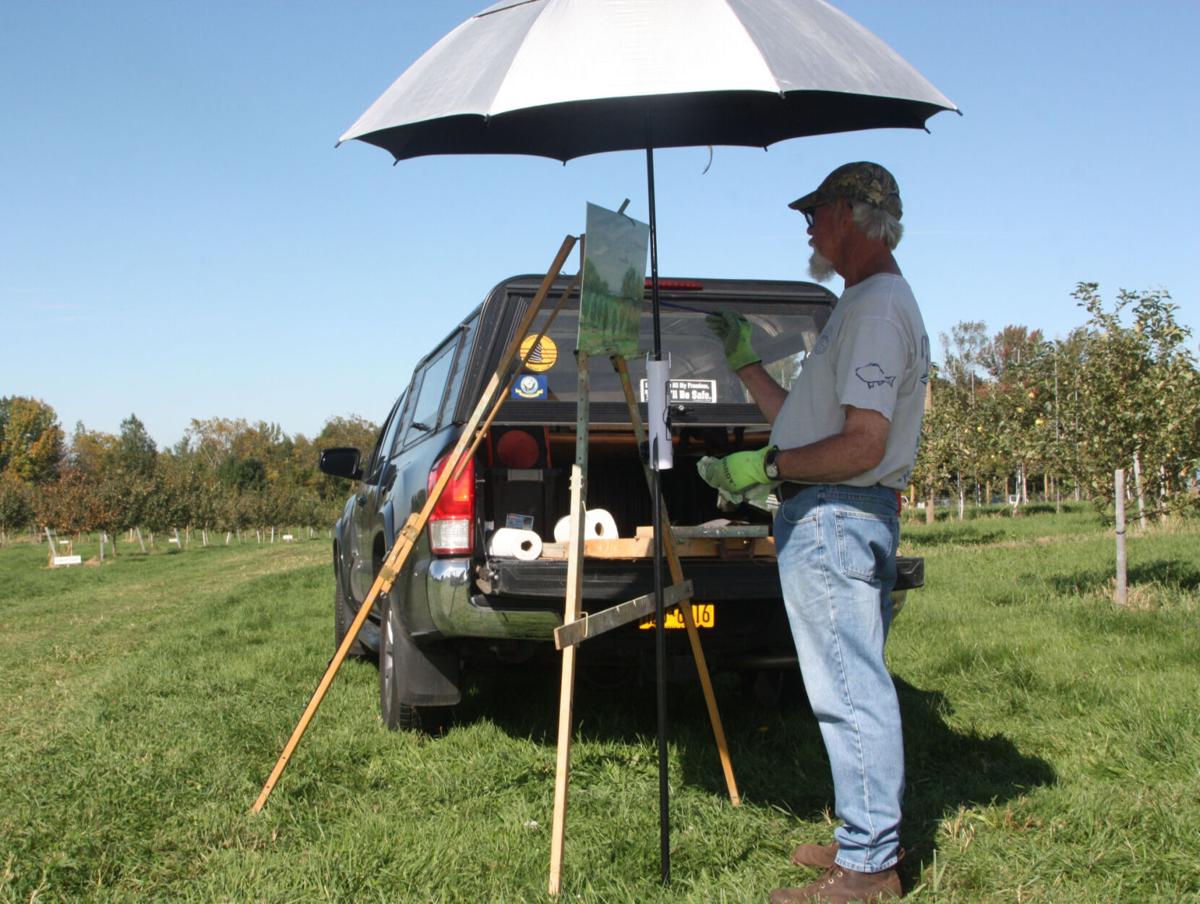 William Parmer of Buckton paints a scene at Prairie’s Orchard on Saturday afternoon. Parmer, a plein-aire painter, paints landscapes in oil and has upcoming shows in Waddington on Saturday, Oct. 10, and Saturday, Nov. 13. Alexander Violo/Malone Telegram 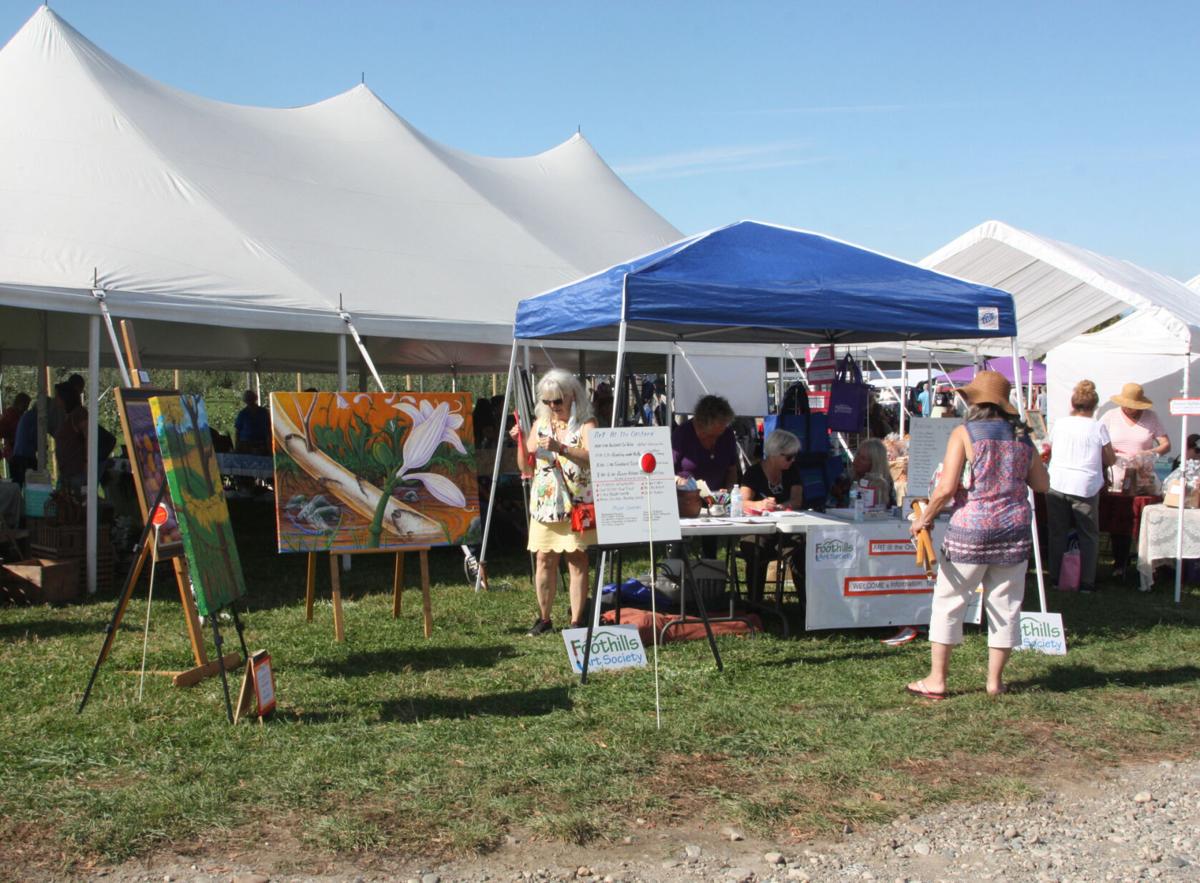 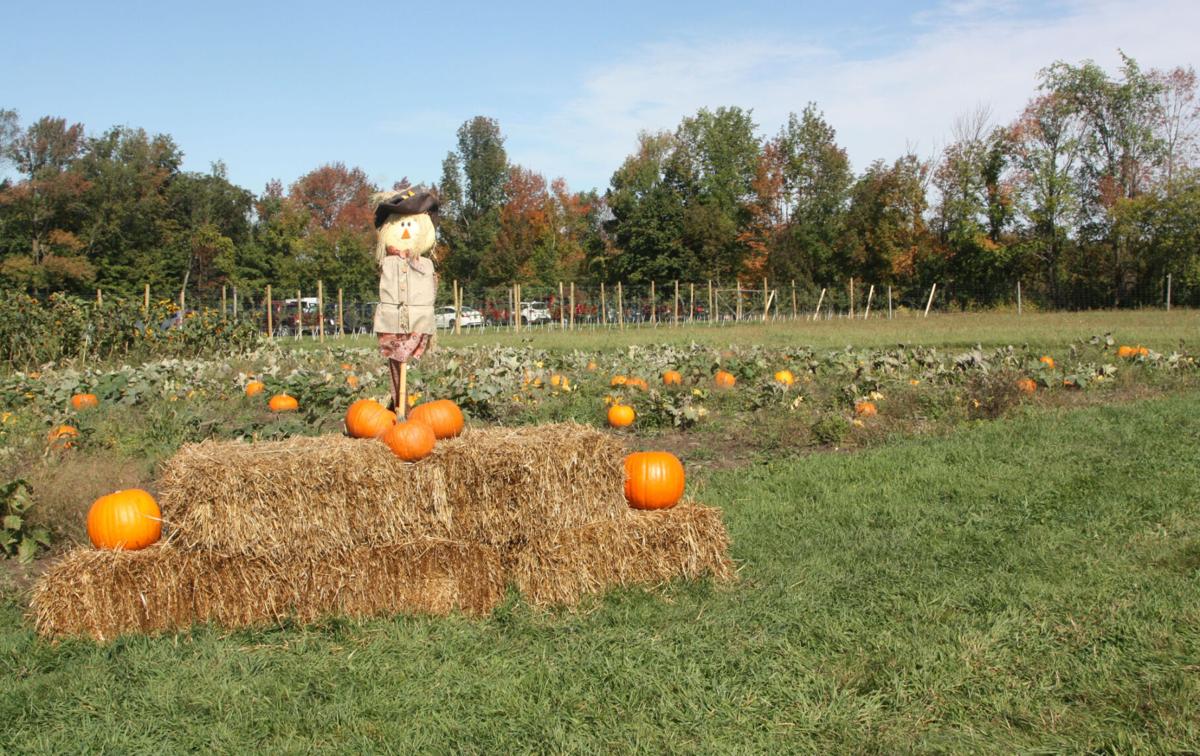 A pumpkin patch at Prairie’s Orchard during the Art at the Orchard festival Saturday in Malone. Alexander Violo/Malone Telegram

The Goddard Sisters play the fiddle and Irish drum Saturday afternoon during Art at the Orchard in Malone. Alexander Violo/Malone Telegram

A tractor heads out for a hay ride Saturday afternoon during Art at the Orchard. Alexander Violo/Malone Telegram

William Parmer of Buckton paints a scene at Prairie’s Orchard on Saturday afternoon. Parmer, a plein-aire painter, paints landscapes in oil and has upcoming shows in Waddington on Saturday, Oct. 10, and Saturday, Nov. 13. Alexander Violo/Malone Telegram

A pumpkin patch at Prairie’s Orchard during the Art at the Orchard festival Saturday in Malone. Alexander Violo/Malone Telegram

Prairie’s Orchard on County Route 24 was filled with vendors and visitors on Saturday during the Art at the Orchard festival, featuring live music, homemade crafts and children’s activities.

Additionally, local artists were on hand to do some painting at the orchard throughout the day, according to Bev Quenville, a member of the Foothills Art Society, and the chair of Art at the Orchard.

“We had over 50 vendors, service vendors, arts and craft vendors, many with their own tents,” Quenville said, “There’s also apples, doughnuts, pies, cider, honey and maple syrup for sale, Prairie’s sells all that.”

Quenville said plein-aire painters, painters who paint outside or in the field, were on hand to paint, answer questions, and talk about their work throughout the day.

“They’re setting up and available to answer questions about creating art, they are going to be producing paintings today,” Quenville said, “We wanted this to be a learning experience, we wanted people to see how art is created.

According to Quenville, the festival was also a place for these artists to sell some of their artwork.

Quenville said the festival used to take place in the Chateaugay Lake area, at Hollywood Inn, but was not held last year due to the ongoing pandemic, and that this was the first year the festival was in Malone.

“Chateaugay Lakes Association started a festival about 20 years ago and when they were ready to let go, Foothills took over,” Quenville said, “The Prairies and I talked about having it here and we thought it was a perfect location for a fall festival, with the apples, and the cider.”

Quenville said she was pleased with the turnout for Saturday’s event.

“The cars are parked all along the road, we have had a lot of customers, as well as vendors today,” Quenville said.

“It’s just a fun day,” Quenville said, “We have beautiful weather, all kinds of people here, we are very pleased with the turnout, it went well. One of the purposes of Foothills is to support the arts and that is what we are doing today.”

Quenville thanked all of the sponsors who made this year’s festival possible, and said a festival next year is a possibility too.

“It’s been very successful and because of that I think the public is going to want us to continue, that is the feeling we get from talking to people, who are asking us if we are going to do it next year, it’s a definite possibility,” Quenville said.

William Parmer, a plein-aire painter, out of Buckton, who paints landscapes in oil, discussed his approach to painting. “It’s really about 25% what you are looking at and 75% you,” Parmer said, “It comes through the filter of all the emotional stuff and all the things that you’ve ever done in the whole sum total of your life, because you are constantly growing, or you should be, so your paintings change and evolve over time.”

Parmer said he started painting seriously after his retirement, about nine years ago.

“I try to paint almost every day,” Parmer said, “Any time I get a chance, I paint.”

Parmer said he started the day painting sunflowers before selecting the northern portion of the orchard and the view behind it as his subject matter due to the challenge it presented.

“This is very difficult to me, a very difficult subject, I’m having a lot of fun trying to work it out and do it,” Parmer said. “I thought this was too complicated, I was attracted to it because you have got some symmetry because it is an orchard and it has been planted by people, and you have the wild background, and the distant view, and I am real partial to distant views, I love distant views, that’s why I chose this to paint.”

Parmer said he was also able to sell a painting at the day’s event.

“The best thing about people buying paintings is that they liked it enough to pay money for it and to me they see in it, what I saw in it, and why I wanted to paint it,” Parmer said.

Prairie’s Orchard is owned by Brandyn and Dan Prairie, who purchased the property in 2013, planted their first trees in 2014, and opened a store in 2020.

The orchard currently has 2,000 apple trees and also housed on the property is Mountain Miss CiderWorks, a business started by Brandyn Prairie and her friends, Tiffany Richards, Kelly Walfield, and Tara West. Brandyn Prairie said the orchard opened to visitors in mid-September with the cider works opening a little earlier in the month.

Brandyn Prairie said the end of this year’s season is weather and apple crop dependent.