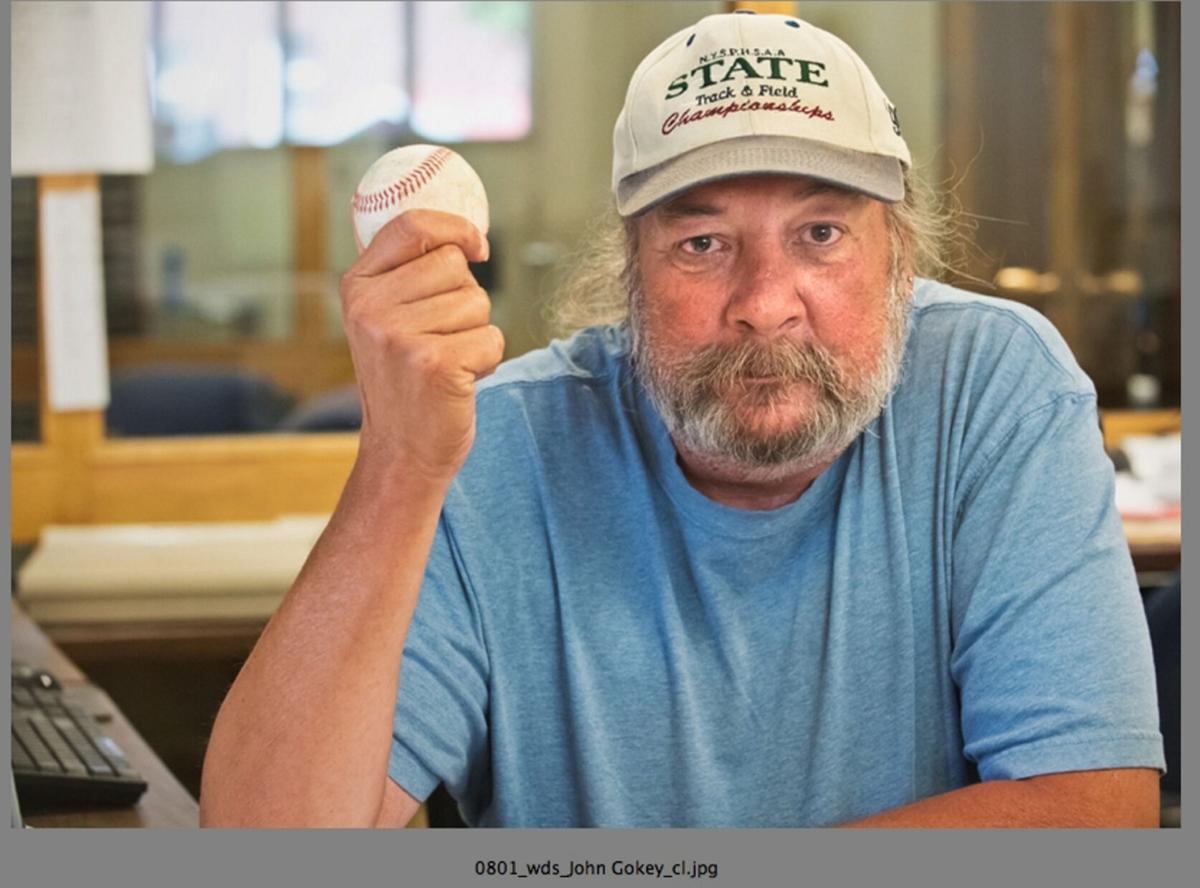 Telegram Sports Editor John Gokey holds a baseball as he cleans off his desk in the Telegram newsroom on Friday. Gokey has retired after 40 years in journalism, the last nine representing his second stint with The Telegram. Chris Lenney/Johnson Newspapers 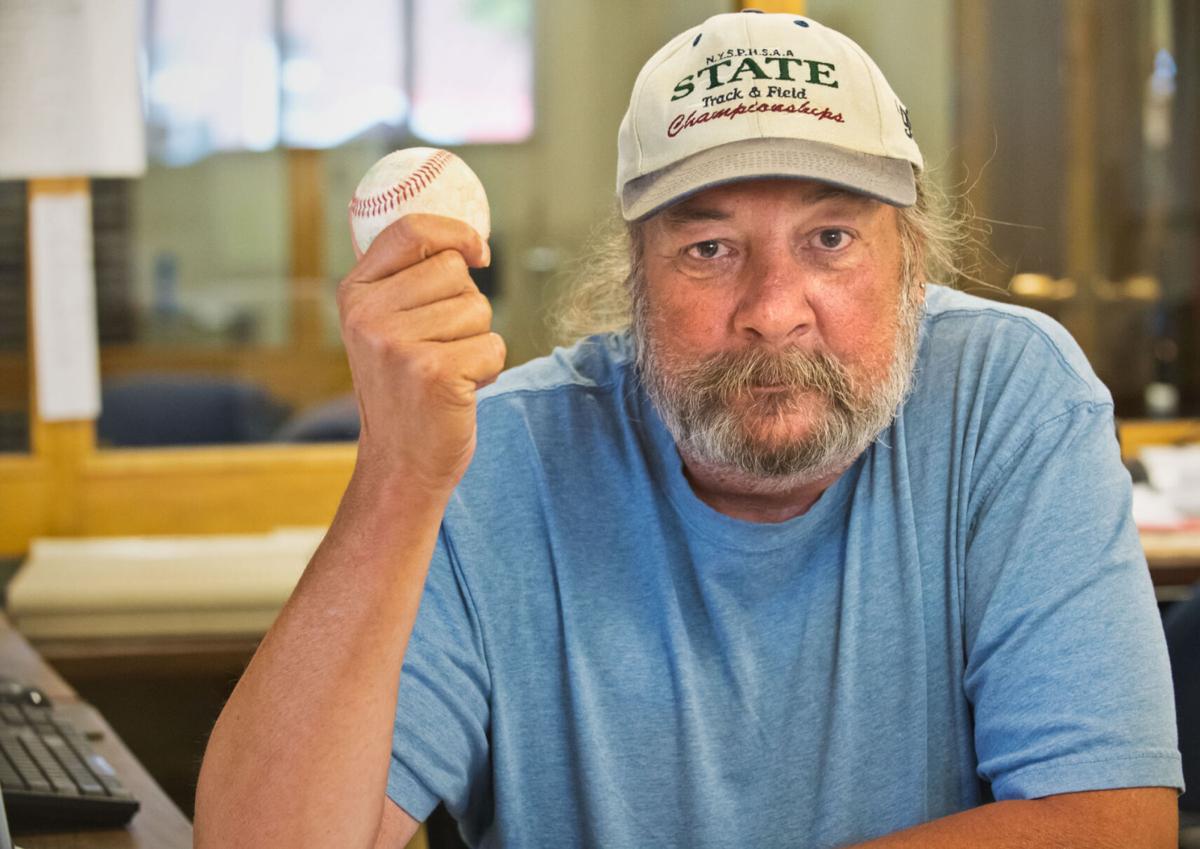 Telegram Sports Editor John Gokey holds a baseball as he cleans off his desk in the Telegram newsroom on Friday. Gokey has retired after 40 years in journalism, the last nine representing his second stint with The Telegram. Chris Lenney/Johnson Newspapers

After 40 years in the business, longtime Telegram Sports Editor John Gokey is ready for a break.

Gokey started at The Telegram in 1990, and eventually moved onto some other positions at other papers before returning in 2011. Now, he’s retiring from his position as sports editor.

“I will remain active in my own capacity,” said Gokey, adding that he’s looking forward to the eventual return of high school sports.

Over the years, Gokey has touched the lives of student-athletes and coaches across the country.

“He’s one of the greatest sports editors ever in the North Country.”

To Gokey, the job is about more than just reporting game scores and statistics. He’s made it a point across his career to elevate the student-athletes of the North Country, in hopes that their athletic prowess gives them a better shot at a good college.

“If I can get one student-athlete into college … I’ve done my job,” said Gokey.

“These kids need to be reported so they can take that next step.”

He also remembers getting the chance to see multiple state championships, including ones played by the Franklin Academy softball and Salmon River hockey teams.

But even between State Championships, broken records and multiple 1,000-point basketball seasons, one memory stuck out for Gokey as the best.

“The day I walked into the (Franklin Academy) gym for their pep rally,” said Gokey.

He was met by hundreds of student athletes, staff and coaches with a standing ovation that lasted multiple minutes.

Even talking about the moment gets him choked up, Gokey said.

Gokey has received multiple awards for his sports reporting, most recently the New York State Athletic Administrators Association Distinguished Service Award, which is “given to a person who is not an athletic administrator but who has made a significant contribution to athletics.” He was also inducted into the FA sports Hall of Fame –– not for his efforts on the field during his high school days in the 1970s but in recognition of his accounts of the Huskies in the pages of The Telegram.

And according to those who have worked with him, he did much more than just report on North Country sports. “He has always made a good thing out of a bad thing,” said Bailey.

Bailey said that even when a team would get beaten emphatically, Gokey made a point to turn the stories he wrote into something positive.

“You don’t kick a kid while he’s down,” said Bailey.

But Gokey also has a stern side, which he would use to put kids who would act up in games in their place. To him, the job was more than just high school sports.

“He had a very good rapport with these kids,” said Bailey.

And Bailey wasn’t the only one who saw him as kin, adding “He was considered family up here.”

Now Gokey’s a long way from where he started, writing local softball league stories for The Telegram in the 80s.

Back then, the newsroom was a lot less high-tech, and the hours were much longer.

“When John started out, you had to work fast on very little sleep,” said Tom Graser, Johnson Newspaper’s St. Lawrence and Franklin County editor, who worked with Gokey at The Telegram in the 90s.

“We published in the afternoon and our deadline was in the middle of the morning. John came in before the sun came up and had to takes scores and boxes of the fax machine and transcribe coaches’ comments off the old answering machine and that’s after being at a basketball or hockey late the night before.”

He’s seen generations of kids grow up through his time writing sports, and he’s even gotten the chance to see some of them become parents of student-athletes themselves.

“I was covering their children,” said Gokey.

He even got the chance to cover Missy West, who would become a Duke women’s basketball player, and during her time in high school, earned the moniker “Miss New York Basketball.”

“Up until a couple years ago, she still called me Mr. Gokey,” Gokey said.

But even when he built strong relationships with some athletes, Gokey rejected the politics of publishing players just for their namesakes, saying it was always about what athlete did on the field that day, and never about their last names.

Now, Gokey said he’s ready to lie low for a while and just enjoy his time, excited to enjoy sports as a fan and be rid of pesky deadlines.

“I may pull out my fishing pole.”