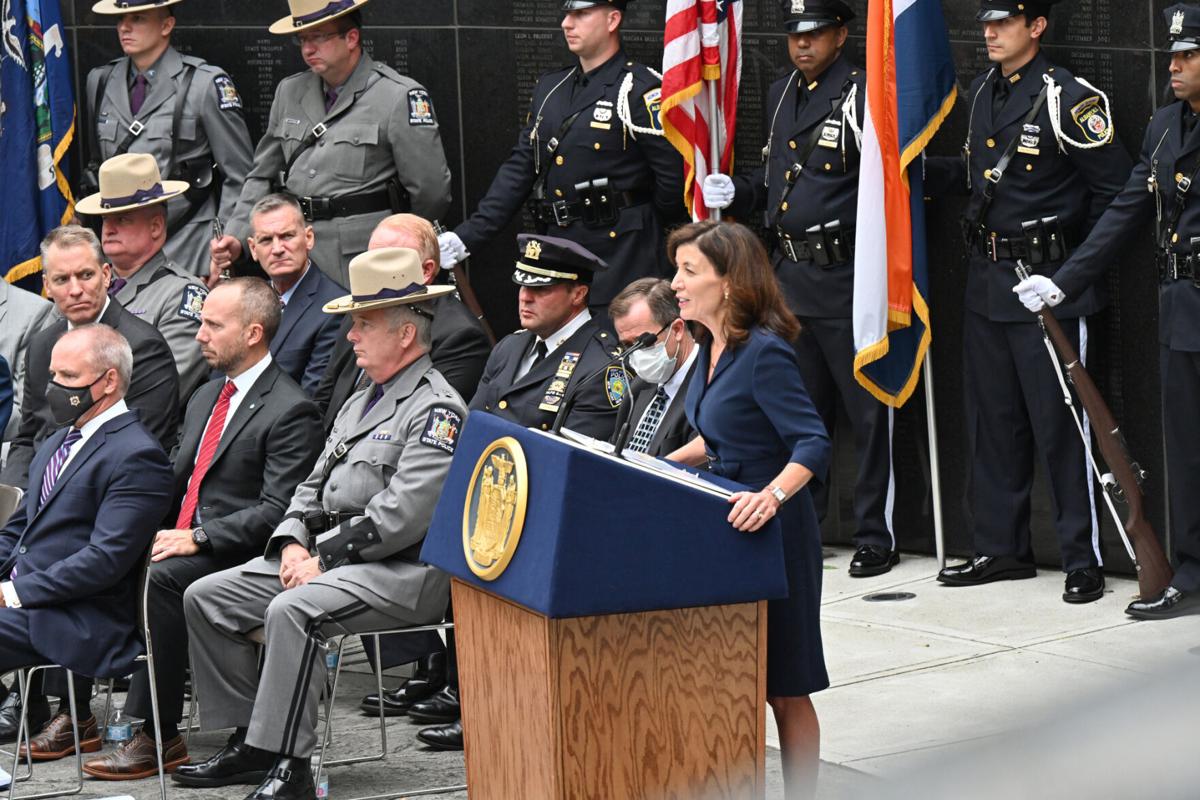 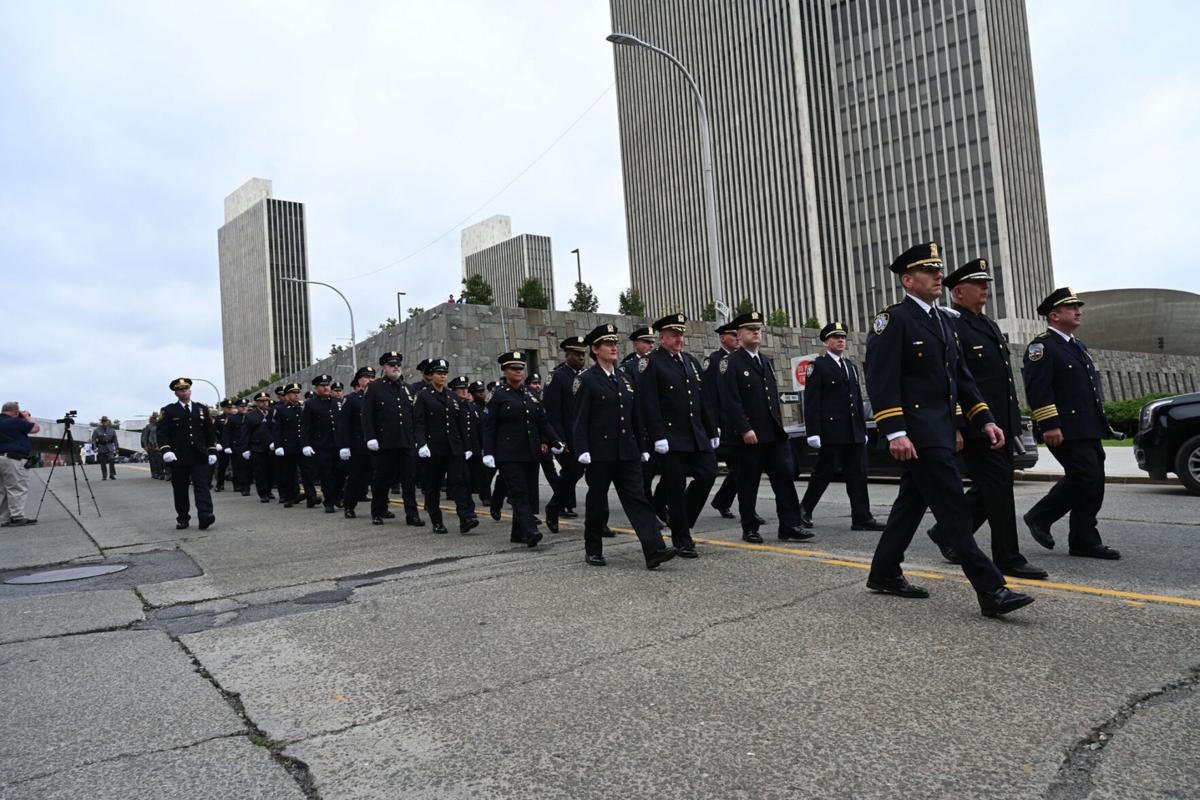 ALBANY — Hundreds of mourning families, officials and first responders memorialized 101 New York law enforcement officers Tuesday who died in the line of duty or of related illnesses, drawing uplifting remarks from Gov. Kathy Hochul who recently distanced her administration from cries to defund the police.

More than 300 people attended Tuesday’s remembrance to honor the 101 police officers in 10 agencies across the state whose names were added to the New York State Police Officers Memorial at the Empire State Plaza in Albany. The memorial bears the names of 1,668 officers to date.

“Every one of us, 20 million New Yorkers, have the opportunity to serve in law enforcement, but your child, or perhaps your spouse, your brother, your sister, your grandpa, they answered that call,” Hochul said during keynote remarks about halfway through the program. “So, they learned something in (your) household that needs to be taught elsewhere: That there is honor in service, and I want you to know how appreciative we are, and that we don’t take this for granted.”

Hochul vowed to law enforcement members and their families she would protect them and the resources needed to do their jobs.

“I will honor you — I will make sure you have the resources you need to continue protecting us when others decline that privilege, that opportunity,” Hochul said. “So the families, know that you are loved. There is a whole family of New Yorkers that is so grateful and can only imagine what you’re going through today, but by showing up here today, you also showed something profound. That you are as strong as the granite behind us. You have the courage to come here when you must be just reeling with pain of the loss of your loved one, and you showed up for them.”

Hochul’s supportive remarks to law enforcement come days after the governor announced her administration does not support the controversial movement to “defund the police,” which emerged in 2020 during months of Black Lives Matter protests and demonstrations in response to national incidents of police using excessive force and the May 26, 2020 death of George Floyd — an unarmed black man who was asphyxiated by former Minneapolis police officer Derek Chauvin.

Activists who push to defund the police believe in reallocating public funds from police departments to other social services, mental health and youth services agencies or community resources to reform the nation’s policing and criminal system.

Lt. Gov. Brian Benjamin, a Harlem native who served as state senator from June 2017 until his appointment Sept. 9, released a statement in support of the defund the police movement this past Martin Luther King Jr. Day, on Jan. 18. At the time, Benjamin argued parts of the New York Police Department’s $5.4 billion 2022 budget — representing 5.5% of New York City’s total $98.56 billion budget — are not essential for public safety.

Hochul, a self-described moderate Democrat, denounced the defund the police movement and stressed her belief in supporting law enforcement Thursday at an unrelated press conference in Manhattan.

“We need our police to protect our communities, but also engage in a different kind of conversation that has gone on in the past,” she added. “The status quo is not acceptable. There are reforms that can and should be and will be had in terms of better communication and any time a member of law enforcement crosses the line as we saw too often, even nationally over the last few years, there will be very severe consequences, but no one in our administration supports defund the police.”

Benjamin walked back his comments in statements to Spectrum News on Friday, saying he stands with Gov. Hochul on the issue, and wants to maximize public safety while holding law enforcement accountable.

The state Division of Criminal Justice Services staffs the Police Officers Memorial Advisory Committee and coordinates the ceremony, which has occurred annually since the memorial’s dedication in 1991. The ceremony was not held in 2020 due to the COVID-19 pandemic.

A person must have served as a police officer as defined in the state’s Criminal Procedure Law or employed as a federal law enforcement officer to be eligible for their name to be included on the memorial. The agency that employed the fallen officer must submit an application for inclusion to DCJS.