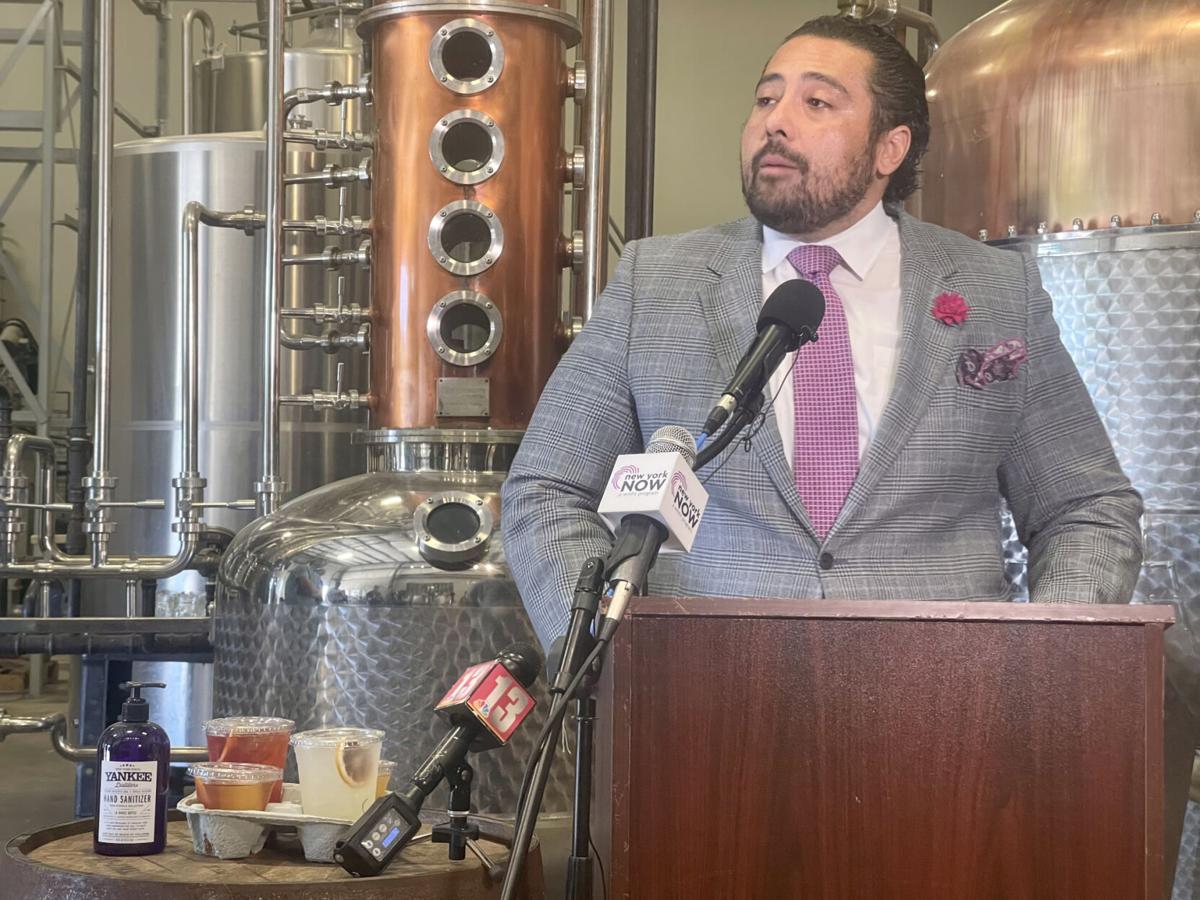 Dominick Purnomo, wine director and co-owner of Yono’s and dp An American Brasserie in the Capital Region, speaks at Yankee Distillers in Saratoga County on Thursday about the need for lawmakers to extend alcohol-to-go. Kate Lisa/Johnson Newspaper Corp. 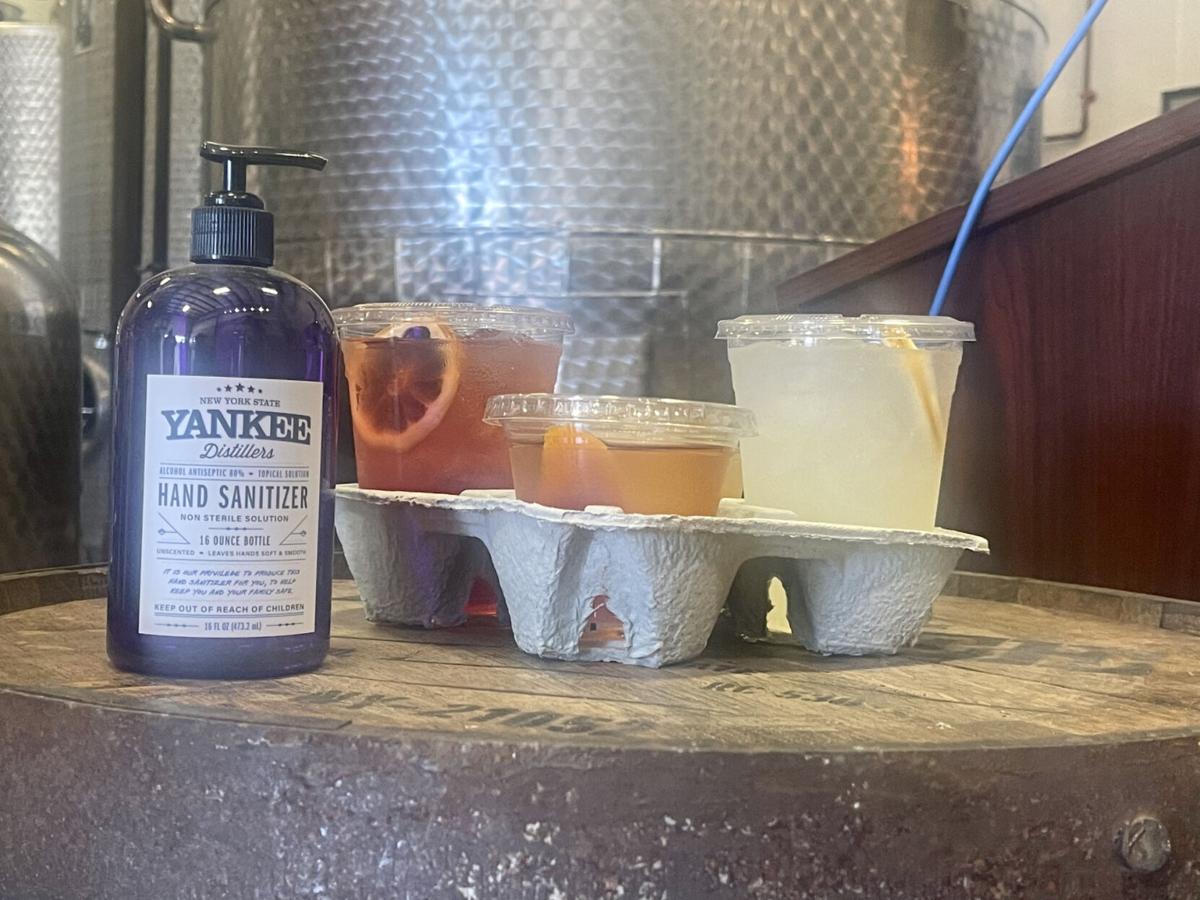 Dominick Purnomo, wine director and co-owner of Yono’s and dp An American Brasserie in the Capital Region, speaks at Yankee Distillers in Saratoga County on Thursday about the need for lawmakers to extend alcohol-to-go. Kate Lisa/Johnson Newspaper Corp.

Restaurant owners, distillers and other eateries blasted the state Legislature on Thursday afternoon for not voting this session to legalize to-go alcoholic beverages, which quickly became a staple of the COVID-19 pandemic while helping the hospitality industry stay afloat.

Alcohol-to-go ended at midnight Friday when the nearly 16-month state of emergency due to the COVID-19 pandemic expired.

Gov. Andrew Cuomo announced the end of the emergency and pandemic-related executive orders Wednesday. New York’s state of emergency went into effect March 7, 2020, after Cuomo signed Executive Order 202, terminates all pandemic-era executive orders, including to-go alcoholic beverages, or the temporary privilege that allowed New Yorkers to order alcoholic beverages from establishments to take home or to be delivered.

To-go sales of alcoholic beverages helped bars, restaurants and other eateries stay in business while they were forced to close, or have limited patrons, during the coronavirus pandemic.

Cuomo’s executive mandate 202.108, which also expired at midnight, allowed statewide craft cider and beverage producers to ship their products, which also gave restaurants and distilleries a critical source of revenue after taking an average financial hit up to 50% last year.

Lawmakers failed to pass bill no. A.3116, sponsored by Assemblywoman Patricia Fahy, D-Albany, which would have extended the alcohol-to-go provisions for restaurants and the craft beverage industry.

“The ability to serve patrons alcohol to go served as an important financial lifeline for primarily small, locally owned restaurants struggling with the disproportionate impact the hospitality sector has continued to experience throughout the pandemic,” Fahy said in a statement Thursday. “I look forward to acting on this issues in the Legislature with my colleagues as soon as possible. We cannot leave these industries dangling — especially now.”

Without further action, the executive order allowing alcohol-to-go was set to expire at midnight July 6.

“The Legislature failed to codify the ability of restaurants to offer alcohol to-go,” Bill Crowley, a spokesman with the State Liquor Authority said Thursday. “With the state’s declaration of emergency expiring on Thursday, all temporary pandemic-related suspensions and directives, including privileges allowing bars, restaurants, and manufacturers to sell drinks to go, will end after June 24.”

Bars and restaurants, in addition to manufacturers with on-premises privileges, may still deliver and sell beer to go under the state’s Alcoholic Beverage Control law.

The State Liquor Authority officials stand ready to work with the Legislature on finalizing the measure to allow restaurants and bars to permanently allow the sale of to-go alcoholic beverages, according to the authority.

“It just shows how asinine and disconnected the leadership is to what New Yorkers want,” said Dominick Purnomo, wine director and co-owner of Yono’s and dp An American Brasserie in the Capital Region.

Owners on Thursday blasted the one-day notice of the expiring mandate and questioned why people can openly smoke marijuana in public since recreational use was legalized this spring, but cannot purchase an alcoholic beverage and enjoy it on the sidewalk.

“This has been working fine for 16 months,” Purnomo added. “You haven’t seen a spike in drunken driving or seen Mothers Against Drunk Driving come out. This makes too much sense, which is why it hasn’t passed.”

McDonald expressed his disappointment the Legislature did not pass the bill to extend to-go alcohol in the state before session ended June 10, and shock the governor announced the rule change with a one-day notice.

“The recent decision to end the state of emergency declaration by the executive brings relief to some individuals and organizations, but the lack of notice has resulted in shock and financial strain on struggling small business restaurants in our region and throughout New York state due to the sudden halt of the alcohol delivery and to-go authorization,” McDonald said in a statement Thursday. “Many of these small businesses had already procured additional inventory for the Fourth of July holiday. Unlike when they had to scramble last year prior to St. Patrick’s Day in 2020 due to the pandemic, this hardship was avoidable and preventable.

“This is not the way to treat small business especially our restaurants who were profoundly impacted by the pandemic and are an integral part of our communities.”

Restaurant, bar and distillery owners Thursday pleaded with lawmakers to vote to allow to-go alcohol if they reconvene in a special session any point this year.

McDonald expects a one-year extension of alcohol-to-go to be a priority for the Legislature to act on if lawmakers are called to return to Albany.

Officials with Assembly Speaker Carl Heastie’s office did not return phone calls, texts or emails for comment about why the chamber failed to advance legislation to extend statewide to-go alcohol and delivery sales.

“The New York Senate is committed to ensuring that our small businesses thrive after this awful year and that is why we secured over $800 million for our small businesses and provided unprecedented tax credits for our restaurants,” Senate Majority spokesman Mike Murphy said Thursday. “We will continue to look for ways to help these businesses.”

Restaurateurs and distillers will continue to push for the legalization of alcohol-to-go in future legislative sessions.