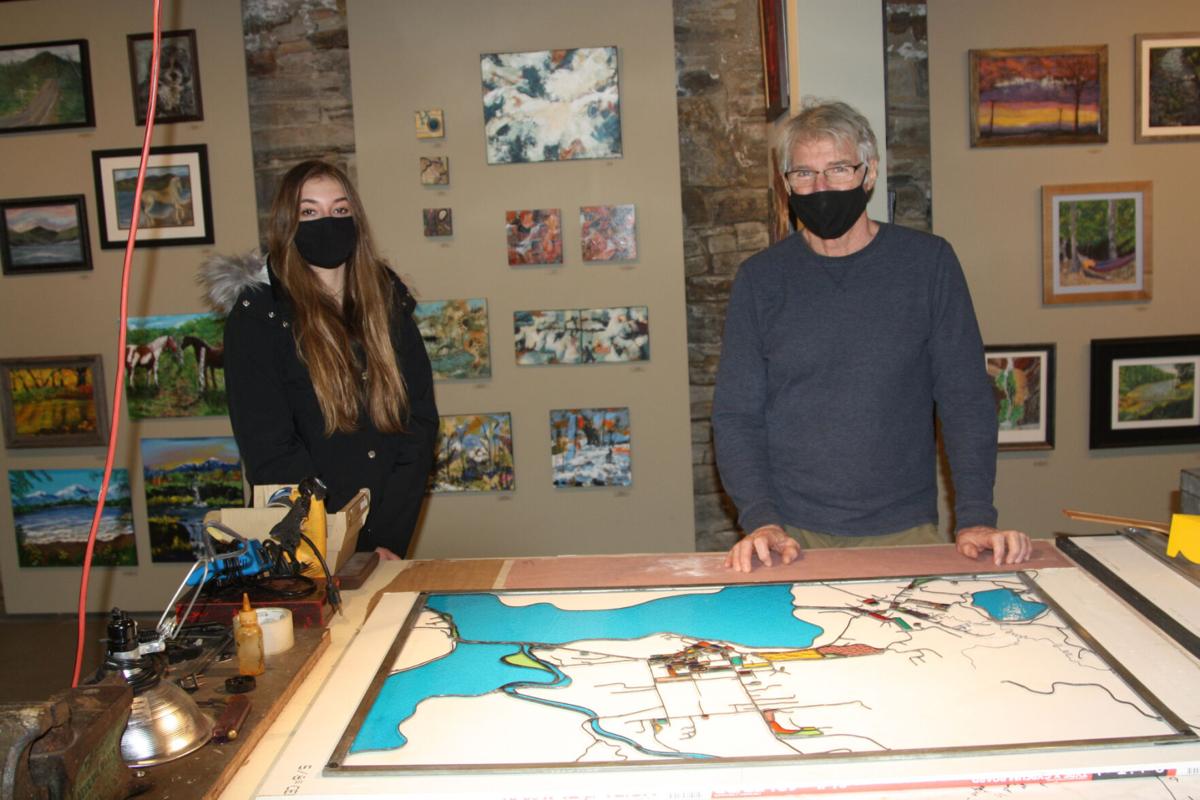 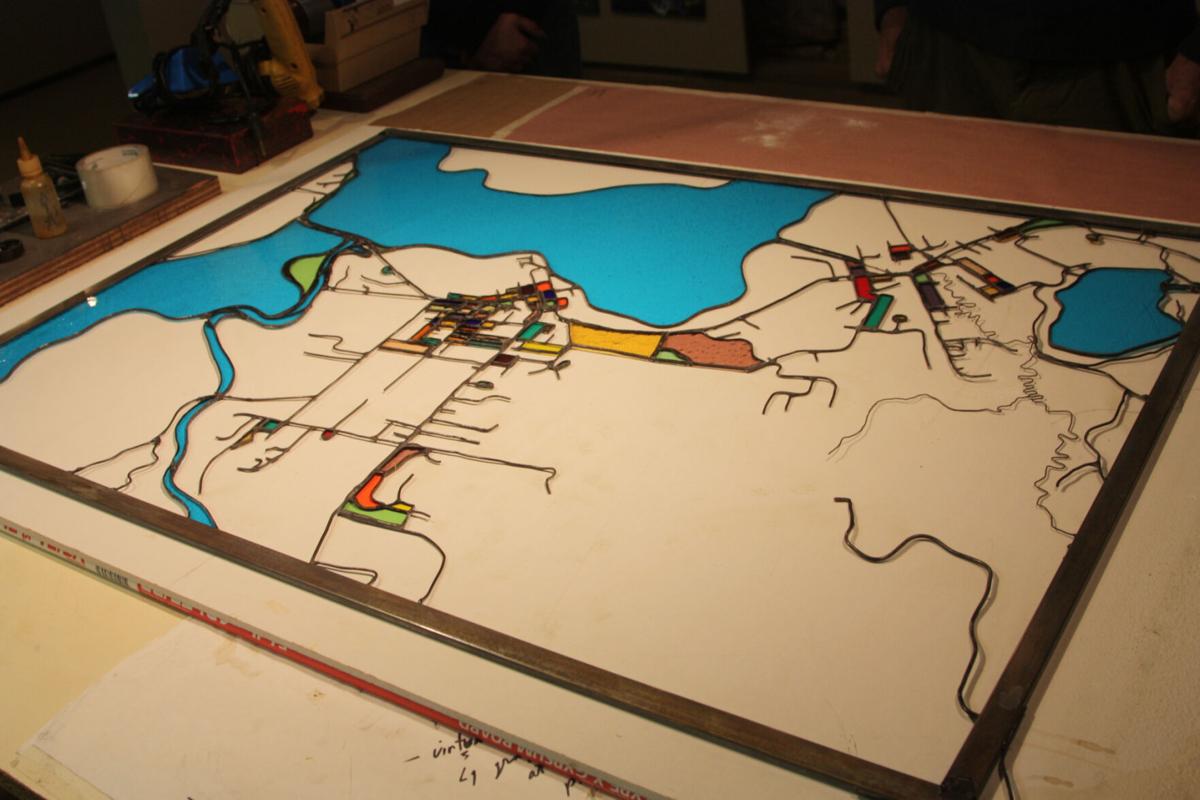 The map of Tupper Lake took about three months to complete, over a span of 10-12 two-hour sessions. Vin Gallo/Malone Telegram 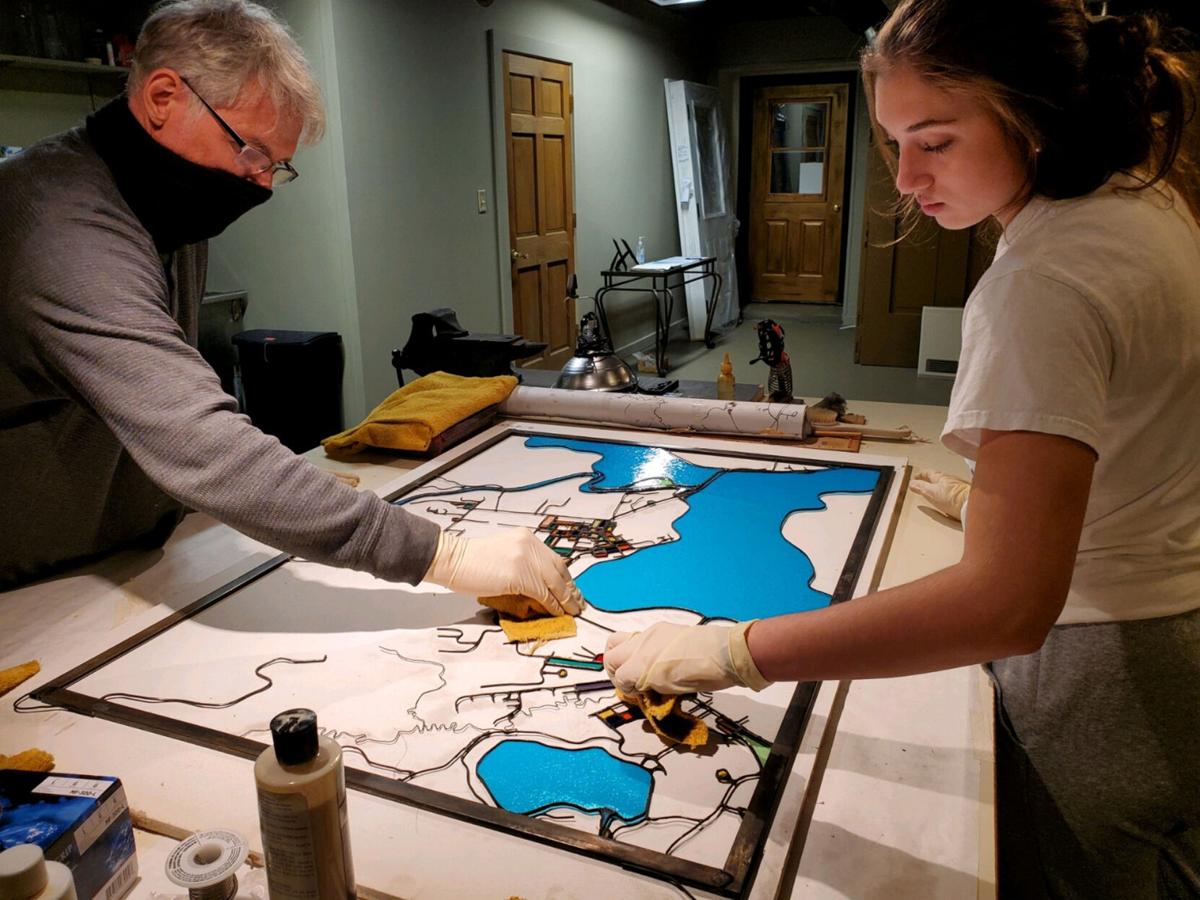 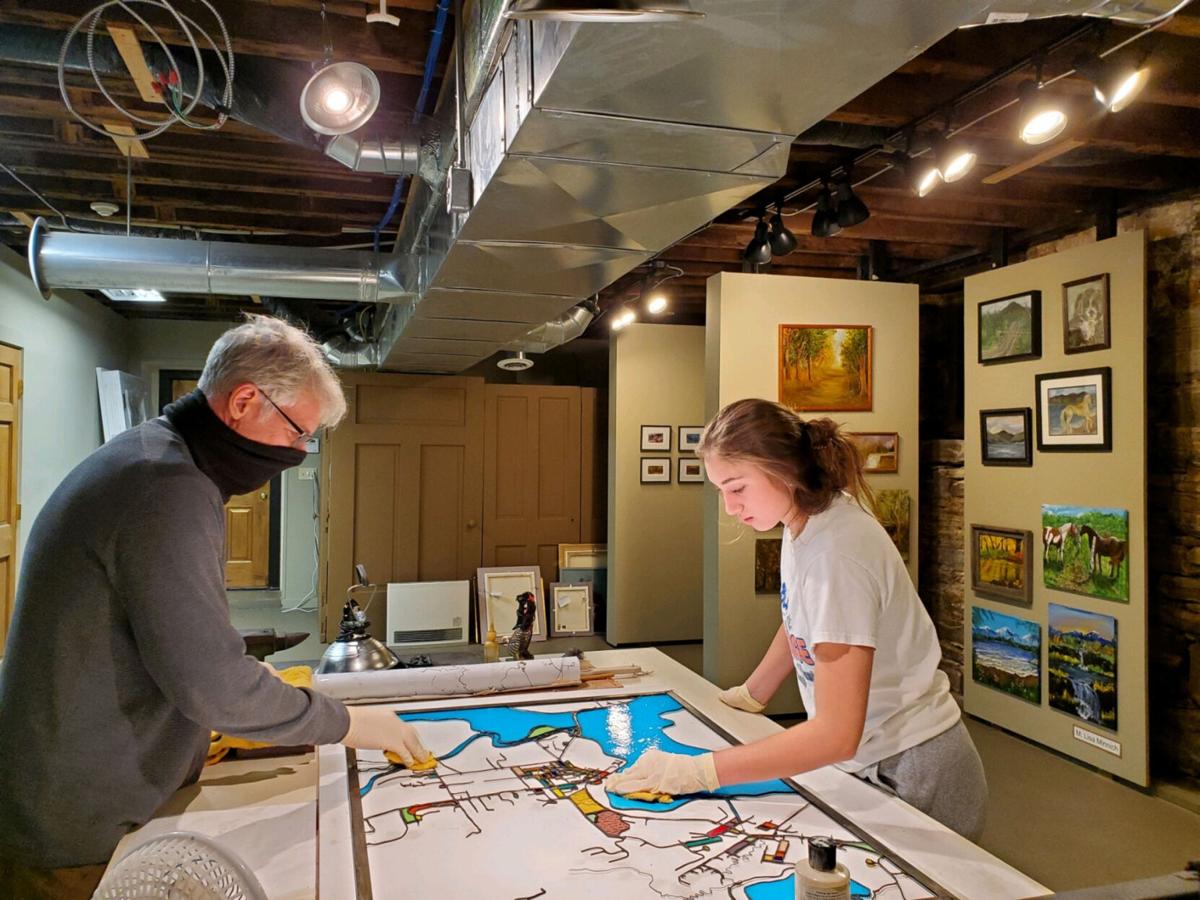 The map of Tupper Lake took about three months to complete, over a span of 10-12 two-hour sessions. Vin Gallo/Malone Telegram

MALONE — After a nine-year hiatus from creating their stained-glass maps and a delay in production brought on by the ongoing novel coronavirus pandemic, the Foothills ARTSociety has finished its third portrait depicting one of Franklin County’s three largest villages.

The newest installment, Tupper Lake, succeeds the previous two projects — Malone in 2007 and Saranac Lake in 2011. The art society plans to hang the three together in the Franklin County Courthouse. The next one will be a map of Chateaugay, which is “tentatively being planned.”

The Bev Quenville Art Fund was created with Adirondack Community Trust in 2004, around the time Quenville retired from teaching art at Franklin Academy. Quenville’s colleagues raised enough money to invest in the special fund, which grew through Adirondack Foundation management. The money awarded in the art fund pays for a Franklin Academy art student to work with a professional artist to create a community work of art.

Foothills ARTSociety received a $1,155 grant from The Adirondack Foundation — used from the Bev Quenville Art Fund — to help pay for the Tupper Lake project. The cost was also partially covered by a donation from the Franklin County Bar Association facilitated by Foothills ARTSociety member Tammy Gordon.

“Malone is more dense,” Hart said. “The towns, they all have a different feel. Saranac is kind of more like Tupper — with a lot of blue, a lot of lake.”

Hart and Massaro completed the project last month by using a copper-foil technique, capping off about three months of work, spanning between “10 or 12 two-hour sessions.” Finding what were roads and what were not were the most difficult part for the two, as they both needed to “get to know Tupper.” Sometimes they would spend an entire session on creating the town’s streets.

They began creating the piece in October, after development had initially been postponed early in the spring.

Hart, a self-taught multi-media artist works in photography, stained glass, music, painting and sculpting. He owned and operated Pouring Light Studios for 11 years, which housed gallery shows. When his studio shut down due to the virus in March, Jenn Bilow of the Downtown Art Cellar, allowed him and Massaro to work in her studio.

“When the schools opened this fall, things started to fall into place,” Quenville said.

Using a map of the town, the objective going into the project was to accurately depict Tupper Lake, in a visibly pleasing way, Hart said Tuesday. The white portions of the map represent unoccupied or undeveloped land.

“The idea was to make all the different blocks in the town different colors and try and bring them out,” Hart said. “My dad had a small airplane … when I was growing up and we used to go up and fly a lot. And this is what we’d see.”

Massaro has been interested in art most of her life. The map of Tupper Lake was the first stain-glass project she’s done. She had to learn from scratch.

“Before this, I did mostly painting and drawings, so this was very new to me,” Massaro said.

“When I’m painting I like to … think about where I want everything to go — map things out on my painting and that was very similar to doing this.”

Hart told Quenville he was impressed with “the focus and ease in learning” that Massaro possessed. She picked it up quickly, he said.

“Maya’s work was quickly up to speed and I found myself paying attention to adaptations in technique she would adopt in an effort to improve her performance,” Hart said.

“I truly love the part of teaching when the teacher has moments of becoming the student.”